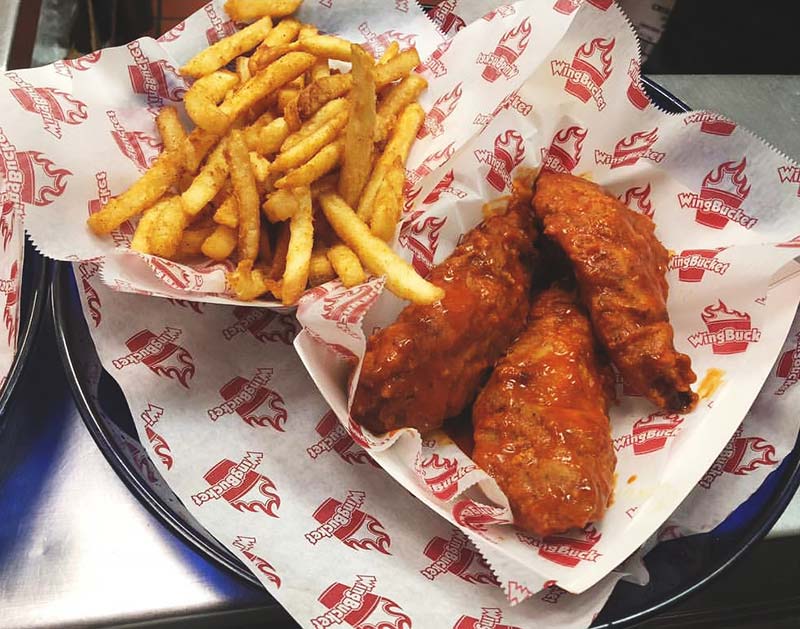 After months of building out its space at 2642 Elm Street, the Deep Ellum location of the Dallas-area chicken wing chain WingBucket — its fifth overall area storefront — is finally opening its doors to the public, starting with a soft opening at 4 p.m. today (Wednesday, January 30).

This should be on your radar for a few reasons. For one thing, WingBucket aims to separate itself from the pack by offering larger-than-usual wings to its customers, which we suppose is a fun spin on the concept. Secondly, the Deep Ellum spot will be selling everything on the menu at half off its listed price during its opening event this evening — including wings, tenders and even ribs.

But wait! That’s not all on the chicken-related front this week!

Seems Intrinsic Smokehouse is making chicken-fried brisket a thing now. A new post up on Eater tells us how the Garland restaurant believes that chicken fried steak has gotten too mainstream, which is how it settled instead on this new take on the barbecue and southern staples. In this version, the brisket is made with a craft beer-infused batter, served with mashed potatoes and smothered in burnt end white gravy. The dish is available only on Tuesdays from 5 p.m. until close, or whenever the dish sells out.

Out in Uptown, the Guatemalan-based bakery and restaurant San Martín has officially opened its first U.S. location. The concept is located in the former MAC art gallery space at 3120 McKinney Avenue with a spacious 8,700 square feet of Latin and European influences. The menu features a range of salads, soups, pastas and sandwiches, as well as Guatemalan dishes and coffees, which are directly sourced and roasted by the company. Hours run daily from 7 a.m. to 8 p.m., with breakfast, lunch and dinner options.

Also in Uptown, a new concept called The Henry is set to hit The Union Dallas next month. Located at 2301 Akard Street, the restaurant will have a “New American focus” — so think dishes such as spicy fried chicken sandwiches and grilled portobello tacos, with an aim at being “the greatest neighborhood restaurant,” whatever that means. The concept will also feature an all-day beverage program, including its own blend of coffee and specialty cocktails

In even boozier opening news: Plano is home to a new sports bar called Woodtop Tavern. The concept is located at 8408 Preston Road, and features more than 30 TVs alongside a full bar, kitchen, pool tables and live music stage. The kitchen serves up standard bar fare, while the bar has a selection of bottled and draft beer, wine and cocktails with daily happy hour specials. Hours run daily from 11 a.m. to 2 a.m.

On a way healthier note: A Dallas chef is now offering vegan chakra-alignment dinners. Chef Kaye Pierce (also know as SiriusVegan) is hosting a plant-based, eight-dinner series called “Eat Your Colors” beginning on Wednesday, February 13. The goal of the series is for diners to eat their way through the different chakra points as they correlate with the gland system. Tickets are limited, and running $45 a person or $80 per couple.

Speaking of vegan foods, Twisted Churros is now slinging vegan-friendly churros at the Dallas Farmers Market. The sweets destination features a selection of plant-based options, in addition to more decadent offerings made with ice cream, marshmallow fluff and Nutella. The stand is open at The Shed on Saturdays from 9 a.m. to 5 p.m., and 10 a.m. to 5 p.m. Sundays.

Switching gears a bit, the California-based Round Table Pizza is heading to Frisco. The 7777 Warren Parkway location is the first for the brand in Texas, although it already boasts more than 450 locations throughout the West Coast and Hawaii. The concept is on the higher end of the fast food pizza spectrum, with offerings including standard toppings and pizzeria fare, with the big exception being a beloved creamy garlic sauce option available to replace with the traditional red sauce offering. An opening is slated for mid-February.

In meatier news, Flores Barbecue is making its way to Fort Worth. Already a top 50 barbecue joints contender according to Texas Monthly, the spot is relocating from Whitney, Texas, to 4801 Edwards Ranch Road at the Trailhead at Clearfork. The restaurant will operate out of a trailer until April, while the brick-and-mortar location is finished behind it.

Signing off on our usual craft beer notes, a lot is happening this week in the North Texas brewing scene — according to Beer in Big D’s latest conspectus, anyway. They report that two new breweries from Fort Worth and Denton (Funky Picnic Brewery & Cafe and Toasty Bros.) recently received their TABC permits, that Bluffview Growler released its first house brew and that BlackMan Brewing received multiple awards at the Pura Vida Indie International Beer Cup for its Smoking Lily Brew. Also? Lakewood Brewing Co. is introducing a new year-round beer called Lemonale.

Cover photo via WingBucket’s Facebook page. Got a tip for The Spread? Email us!