The Spread: There Are Now Six Shake Shacks In North Texas. 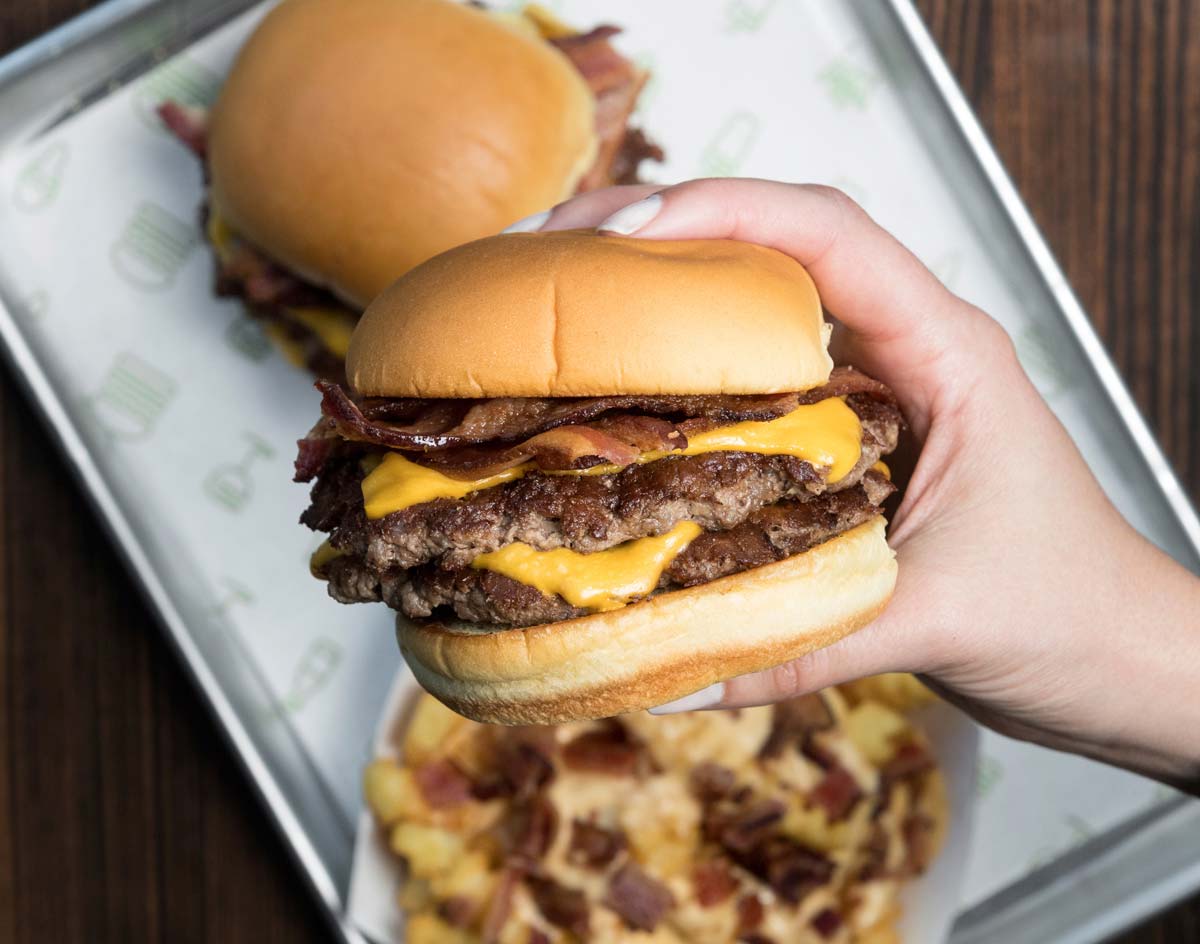 Abacus Says Goodbye, Shake Shack Heads Down To Old Town Shopping Center, SMU Gets A Biscuit Bar And Lakewood Gets A New Farmer’s Market. Plus More!

After 20 years of rocking the Knox-Henderson strip, the acclaimed, Kent Rathburn-opened Dallas restaurant Abacus has revealed that it will soon close its doors for good. Notes Eater, the restaurant has seen a dip in business in the last few years, and the group behind it has plans to start working on an as-yet-unannounced new concept in the space once Abacus shutters for good come June 1.

For instance? Renowned burger joint Shake Shack is taking its burgers down to Old Town Shopping Center along Greenville Avenue, where the Dallas Observer notes it will be opening its sixth North Texas location on Monday, May 27.

The similarly named (but not related) Fat Shack, meanwhile, is has Fort Worth all hyped up about its new home near Texas Christian University. The just-opened, Colorado-based chain, fresh off a $250,000 investment from Mark Cuban in a Shark Tank taping, is already being described by the Fort Worth Star-Telegram as like “a State Fair year-round.”

Near another institute of higher learning — back here in Dallas at Southern Methodist University (and not, turns out, in Deep Ellum) — everyone is abuzz about Plano’s well-received Biscuit Bar making its first foray into the big city by opening a second home at 6501 Hillcrest Avenue. Per the Dallas Observer, the new location opens this Friday, May 24.

Not bound to any one location, a food truck newcomer is dishing out Tex-Mex with a Pakistani twist: The tongue-in-cheek named Halal Mother Truckers offers items like tacos, rice bowls, quesadillas and loaded fries made with tikka. TheDallas Observer explains that those thinking of gyros and skewers when they see the word “halal” will see their expectations broadened thanks to inclusive options with its fusion creations, all of which emphasize the true meaning of the word, which refers to the actual way the meat is cut and prepared.

On the Tex-Mex front, the newly opened Iowa-based chain Pancheros Mexican Grill has expanded with a second North Texas location. Really the exact kind of news you can only expect from CultureMap, the newest outpost at 3275 Regent Boulevard in Irving makes the second Pancheros to open in Texas this year, after its McKinney debut in March. The concept is known for its take on the “perfect burrito,” where the ingredients are mixed with a special spatula. Expect more Pancheros in the future, as the franchise group has more locations planned throughout Texas.

Over in East Dallas, meanwhile, CultureMap has the beat on a new farmers market joining the area market scene. Courtesy of Good Local Markets (the people behind the White Rock Farmers Market), the Lakewood Village Farmers Market is located in the former Albertsons parking lot at the corner of Mockingbird Lane and Abrams Road. The Lakewood Village will run Sundays from 9 a.m. to 2 p.m., adding an extra day of shopping for weekend market goers. While you can expect some familiar vendors from the White Rock market, Lakewood will host a selection of new farmers and vendors from throughout DFW. The market will run through October 27.

On the coffee wire: CultureMap also notes that Downtown Duncanville is getting a craft coffee shop called Black & Bitter Coffee and Books. The concept is the brainchild of Bryan Kaeser, the man behind the shuttered Dallas Beer Kitchen on Greenville Avenue. As the name suggests, the shop will combine books and coffee, with beans from the popular North Carolina-based roaster Counter Culture, alongside local pastries from La Casita. As for the drink menu, look forward to plenty of unique and on-trend options, including but not limited to CBD infusions, nitro cold brews and non-dairy alternative mills. Look out for an opening at the end of this month.

Meanwhile, Guidelive reports that beloved Denton coffee shop Jupiter House has finally reopened after at 2017 fire. The shop underwent 74 weeks of reconstruction due to water damage following that incident. It now boasts a full kitchen where they’ll churn out in-house made pastries and bagels from its shuttered sister concept, Royal’s Bagel Deli. Beans will still be sourced from Distant Lands Coffee in Tyler.

In sweeter news, a self-taught baker is serving vegan desserts out in DeSoto, the Dallas Observer notes. Delightful Sweets, located in Grow DeSoto Market Place, has a variety of decadent vegan desserts such as cupcakes at an affordable price. The shop also serves non-vegan goods, most under $5. Hours run from noon to 6 p.m. Wednesday through Saturday, and Sunday from 1 to 5 p.m.

Speaking of vegan goods: Milk & Patience now offers vegan yogurt. The local yogurt purveyors expanded their wares to include a coconut milk, vegan-cultured yogurt thanks to a flood of requests, per SideDish. The yogurt is available in a variety of flavors, and can be found at Royal Blue Grocery both on shelves and in grab-and-go parfaits.

In other healthy news, Up Inspired Kitchen in Frisco received the Whole30 seal of approval. GuideLive reports that the breakfast and lunch concept is the fourth restaurant group in North Texas to receive the rare designation, joining Zoe’s Kitchen, Snap Kitchen and Gather Kitchen (note the kitchen theme). Up Inspired Kitchen offers four, Whole30-approved meals that can be ordered both in-restaurant and online.

On to some libation news, the original Dickey’s Barbecue Pit now has its own bar. Aptly called Central Bar, D notes that the concept combines craft cocktails with barbecue culture in a slightly dive bar-like atmosphere. This means affordable and approachable hand-crafted drinks like a smoked Old Fashioned, alongside standard barbecue fare, as well as a special menu of offerings served after 9 p.m. when the restaurant side closes (read: Dickey’s After Dark). Central Bar is open daily from 11 a.m. to 11 p.m. (until midnight on weekends), with happy hour from 4 to 7 p.m.

In other boozy news, Oak Cliff’s newest Irish pub, Cannon’s Corner, is now open. The 1314 W. Davis Street establishment features the self-professed largest selection of Irish beers in the metroplex, in addition to more than 200 Irish whiskeys and a menu of Irish favorites. Hours run daily from 11 a.m. to 2 p.m.

Ending off with our usual craft beer notes: Manhattan Project Beer Co. closes in on its West Dallas opening. The Dallas brewers are finally making the transition to brick-and-mortar after operating from a retail-only distribution model since 2016. The new space will allow them to vastly increase production, while offering a coffee shop-like taproom, complete with their trademark science and chemistry theme. An opening is slated for fall.

And lastly, Deep Ellum Brewing Co. won a trio of awards at the 2019 Australian International Beer Awards. The brewery took home silver for its Play Date in the specialty beer category, and bronzes for its Local Legend and Neato Bandito in the sweet stout and other international style lager categories respectively.

Cover photo courtesy of Shake Shack. Got a tip for The Spread? Email us!