The Spread: Oh God, Zini’s Is Plotting A Comeback? 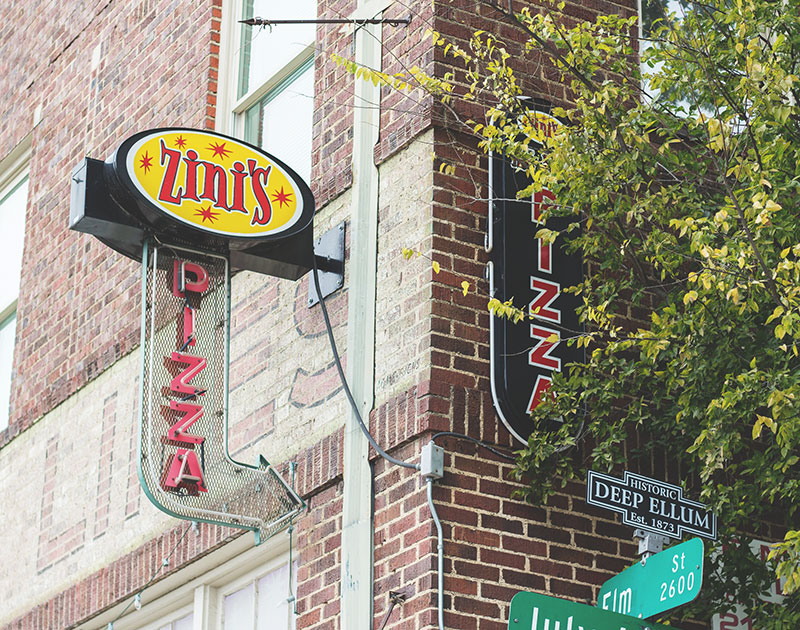 What is dead may never die: Last week, the venerable (if consistently inconsistent) Deep Ellum pizza joint Zini’s Pizzeria announced that it is plotting a comeback.

In a Facebook update posted by whoever is currently in charge of that account, the pizzeria, which closed in November 2017 after a 20-year run in the neighborhood, revealed that it’s planning to resurrect itself in “a big way.”

We’ve reached out for more information about this vague reveal, but have yet to receive a response with any tangible details. Here’s what we do know, though: 1) It’s genuinely surprising that, with all the new concepts rapidly filling up the Deep Ellum dining scene, no pizza concept has swung in (alongside Serious Pizza, anyway) to grab a share of the market opened up by Zini’s closure, and 2) If Zini’s is indeed returning to Deep Ellum (it’s impossible to say at this point where owners are looking to open their new joint), it won’t be doing so in its old home at 2639 Elm Street, as that address is currently occupied by the tasty vegan food and coffee shop spot Tiki Loco, which opened in that space in October 2018.

Rest assured that we’ll be keeping close tabs on this story and sharing info on it as we receive it.

Speaking of information being shared: Every food writer in town is up in arms this week and rushing to be the first to report on the possibly bursting bubble of the once-red-hot Dallas food hall market. This coverage all stems from the fact that John Tesar has added his Knife Burger concept to the growing roster of businesses that have pulled out of the Plano dining destination Legacy Hall of late. Despite being one of the highest-earning stalls in the three-story space, Tesar has cited a dispute over contract details as the main reason for his brand’s departure, while also wagging his finger at parking headaches and the difficulties of turning a profit without any bar and/or beverage sales going into his coffer. To fill the void left behind by these deserters, Front Burner Restaurants, the group behind Legacy Hall and about a billion other restaurant concepts, is maintaining operations on some two-thirds of the property itself, with promises of new vendors slated to takeover its vacant stalls in the coming months. Meanwhile, Knife Burger fans can still get their fix at its other two area locations.

Fort Worth’s Crockett Row at West 7th development, on the other hand, isn’t having any difficulty at all in finding tenants. This week, it was revealed that a handful of Dallas-based concepts are slated to head wetst and open up shop in the complex — the first being El Bolero Cocina Mexicana, which is scheduled to open this Friday, February 15. Following closely behind are new outposts of Toasted Coffee + Kitchen and Concrete Cowboy.

In Dallas, Matt McCallister’s new Homewood venture has delayed its debut to next month. After exciting diners with a “tentative” opening date of February 5 last month, McCallister has come out and pushed his new  Oak Lawn neighborhood spot’s opening to March 8. Hey, good things come to those who wait.

Of course, Fort Worth barbecue fans are about to get some line-waiting relief as Heim Barbecue has announced plans to open a second location next month. The new, 7,500-square-foot restaurant and catering space will take root in the River District, where it will be outfitted with eight smokers, an outdoor beer garden and covered patio. Expect a more specific opening date to be announced soon.

And, speaking of barbecue, an award-winning, father-and-son team have opened their own restaurant in Garland called Blacksmoke BBQ & Grill. Located at 2121 Northwest Highway, the concept focuses on traditional barbecue fare, complete with meat-by-the-pound options and a solid selection of sides. Other treats include a brisket grilled cheese, grilled bologna sandwiches, burgers and more. Hours run from 11 a.m. to 8 p.m. on Tuesdays through Thursdays, 11 a.m. to 9 p.m. on Fridays and Saturdays, and 11 a.m. to 7 p.m. on Sundays. The spot will be closed  on Mondays.

In perhaps flashier news, a Miami celebrity hotspot is one of the first concepts to sign up for a lease at the gargantuan and still-under-construction The Epic development in Deep Ellum. The restaurant-meets-lounge concept Komodo will be located on the ground floor of one of The Epic’s three buildings — the office tower found at 2550 Pacific Avenue, specifically. There, it’ll boast some 20,000-square-feet of combined interior and patio space, all of which are expected to include a fair amount of that token Miami-chic aesthetic, which, for better or worse, is certainly befitting of the burgeoning party vibe of the neighborhood.

Finally, in craft beer news this week, two area breweries were awarded medals at the 2019 Best of Craft Beer Awards: Deep Ellum Brewing Co. which found itself a repeat winner for its Deep Ellum Lager, and Hopfusion Ale Works, which was a first time winner for its Feisty Red Head brew.