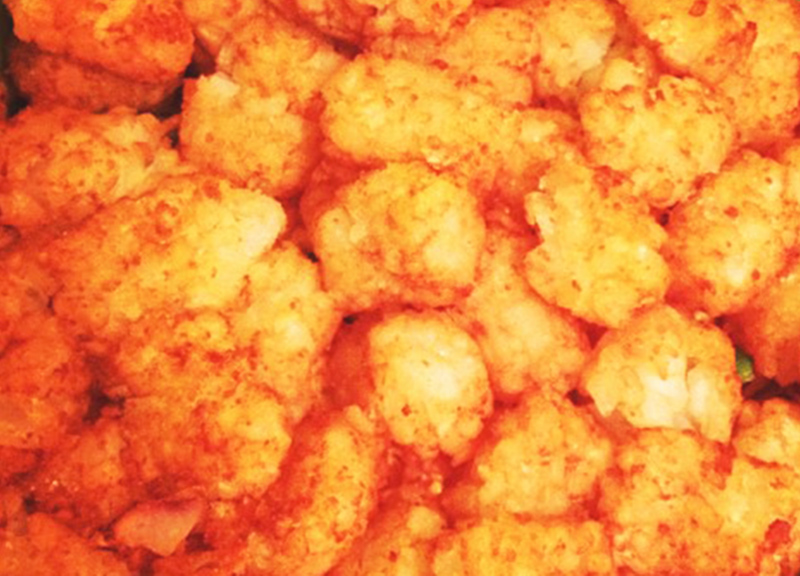 A Tater Tot Fest Is Coming To Town and The Rangers’ Playoff Menu Is Gross.

Just when you thought there already was a festival for every type of food imaginable comes this curve ball: In March of next year, Dallas will play host to an entire festival dedicated to tater tots.

Hand to god, this is a real event — and one that is touring all across the country, actually. Specifically, the Dallas version of the Tater Tots & Beer Festival is set to go down from 3 p.m. to 6 p.m. on Saturday, March 11, at Fair Park. Per the fest’s own posted info, ticket prices are set to go up in cost on Halloween, but for now, GA passes run $30 and will get you all the tots — gourmet ones, they promise! — you can handle. Also, there will be beer. Warns organizers: There are ***only*** 2,000 tickets available to this, so act fast!

Speaking of foods that maybe aren’t worth celebrating: Globe Life Park has some new gut-busting offerings for the playoffs. Let us know if any of this sounds good to you:
• Popcornopolis Pita: Smoked brisket and mac and cheese served on pita bread, then topped with caramel popcorn. (Available in Sections 24 and 49.)
• Atomic Burger: A two-pound cheeseburger with ghost pepper cheese sauce. (Available in Sections 26.)
• TamArlington Dog: A hot dog stuffed into a tamale, topped with chili and nacho cheese. (Available in Sections 25.)
• N.E.Q Sandwich: Short for the Ranger’s “never ever quit” motto, this Philly cheesesteak includes provolone cheese, fried jalapeño slices, onion rings, waffle fries, fried mozzarella, and white queso. (Available in the Captain Morgan Club.)

Far healthier are the paleo-centric foods served up by the people behind Lower Greenville’s HG Sply Co. who’ll be bringing their wares to Rockwall starting October 10. The new spot, reports CultureMap, is called Standard Service and it will open next to a crossfit gym, naturally.

An entire group of people — sweeping generalization alert! — who could probably stand to get more into crossfit are Dallas’ craft brewers. Nonetheless, these folks will in all their bearded glory be posing for a new charity calendar being put together by the folks at Dirtbag Charities, Guidelive reports. The calendars will go on sale during November 11-20’s North Texas Beer Week festivities and cost $20 a pop.

Speaking of craft brewing: Community Beer Company is making its formerly only-State-Fair-of-Texas-available Funnel Cake Ale available outside of the fairgrounds this year. Cheers to that.

Let’s stay on the drinking tip for a bit, yeah? Because there’s a gang of new joints for you to check out. The Dallas Observer has your early looks at new Downtown whiskey haunt The Crafty Irishman and chic new Sylvan 30 cocktail spot called Jettison. D Magazine, meanwhile, gives you a gander at the new Deep Ellum imbibery Stir, which is taking over the old Art Bar space at Main and Crowdus.

On the new-meets-old tip, meanwhile, Central Track can confirm that, once the Statler Hilton re-opens, it will house the latest incarnation of the Rio Room, the demise of which it appears was (once again) greatly exaggerated. This past Saturday night, management hosted a soft-opening for the new spot, although the formal opening still looks like a ways off.

If you want to put your own stamp on a Dallas classic, then maybe help out the folks at Snuffer’s, who are so hard up for burger ideas that they’re crowd-sourcing for concepts and asking for your help, reports Guidelive.

Or you could just, like, mellow out, man, at the new Mellow Mushroom coming to Henderson Avenue sooner than later, per Escape Hatch.

Lastly, let’s end this week’s notes with where to get your booze on these next few days. With the Red River Rivalry dominating the weekend, pretty much every bar is running special, but the best deal looks like it’s going down at the Quarter Bar, where they’re serving $2 jello shots and $4 booze pops in Texas orange and Oklahoma red all weekend long.

Need more warning for your drinking schedule? OK, check out Sundown at Granada any Friday this month for their Oktoberfest celebrations, where they’ll serve German brauts, potato salad, beer-braised red cabbage and sauerkraut all night long, along with specials on German beers.

Cover photo by Tony Webster, via WikiCommons. Got a tip for The Spread? Email us!