The Rolling Stones To Play Dallas’ Cotton Bowl On May 29.

It’s Official: The Iconic Rock ‘N’ Roll Band Will Return To The Cotton Bowl, Which It First Played In 1975, On The Next Leg Of Its Ongoing “No Filter Tour.”

At the crack of dawn this morning, The Rolling Stones announced the next leg of stops for the “No Filter Tour” that the iconic rock ‘n’ roll band has been on since 2017 — and, yes, included in that 15-city run of shows is a Dallas date.

On Friday, May 29, 2020, The Rolling Stones will make a triumphant return to The Cotton Bowl. Tickets to the show are set to go on sale to the public via the band’s website on Friday, February 14, at 10 a.m.

We’ve not yet received word on any ticket price ranges for the gig, but it’s a safe bet that they’ll cost substantially more than the $10 general admission rates that fans paid when the band first played this same venue 45 years ago.

By our count, the May 29 stop will mark the band’s fifth concert at the iconic Fair Park stadium. Following that aforementioned first “Tour of the Americas” stop in 1975, the band also played the stadium as part of its “American Tour” in 1981, its “Steel Wheels/Urban Jungle Tour” in 1989 and its “Voodoo Lounge Tour” in 1995.

The Stones’ last stop in the region came five years ago, when Mick, Keith, Ronnie and Charlie played Arlington’s AT&T Stadium as part of its “Zip Code” tour in 2015.

That the band is returning to the Cotton Bowl for this upcoming show is something of a surprise — and quite the welcome one, considering the dearth of events not related to the State Fair of Texas being hosted in Fair Park in recent years. That tide, however, appears to be turning: On New Year’s Day, the Dallas Stars hosted the NHL’s annual outdoor Winter Classic game at the Cotton Bowl to rave reviews, and international K-pop sensations BTS shortly followed that event up by announcing plans for a two-night stand at the stadium this coming May.

Also something of a surprise? That this Dallas announcement wasn’t more widely rumored prior to today’s reveal. Historically, the Stones tease their upcoming dates by posting billboards — hell, sometimes even murals — in cities they’ll soon be touring. This was the case in Dallas in 2015, but the fan sites that had been speculating about the upcoming 2020 tour stops these last few weeks had their Dallas theories thrown somewhat when no photos appeared on social media of the Stones’ famed “tongue and lip” logo popping up anywhere the city.

Well, turns out, the logo did appear in town — and perhaps on a grander scale here than elsewhere. Yep, we can now confirm it: The Rolling Stones logo was flashed right up there on the massive LED facade of the Omni Hotel for a spell on Tuesday night for all to see. It’s just that no one appears to have snapped a pic of it and posted it online — or at least shared it with those sleuths, anyway — until now. 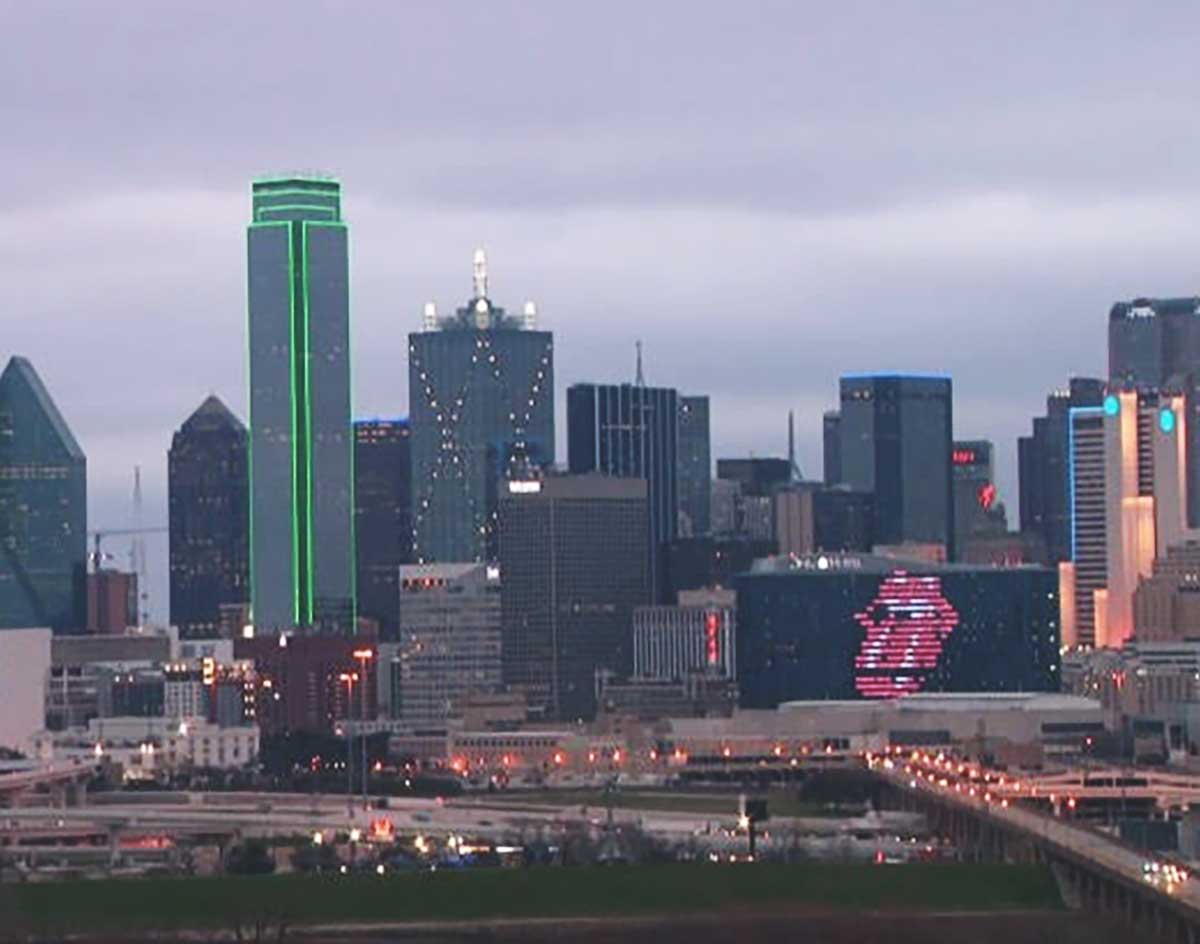 Consider Dallas spoiled with consistently interesting Omni visuals, I suppose. We’re certainly spoiled to be getting another Stones show, that’s for sure.

Or, then again, maybe we’ve just rightly earned such an honor through the years? After all, Dallas was the home of a groupie the band so adored that it even immortalized her by name in a song on 1972’s seminal Exile on Main St.

While we wouldn’t dare tell the Stones which songs to play when they return to Dallas a few months from, you’ve gotta admit: It would be pretty damn cool to hear the band play “Rip This Joint” in honor of the late Barbara Cope — better known as “The Butter Queen” — on May 29, right?

I mean, we think so.