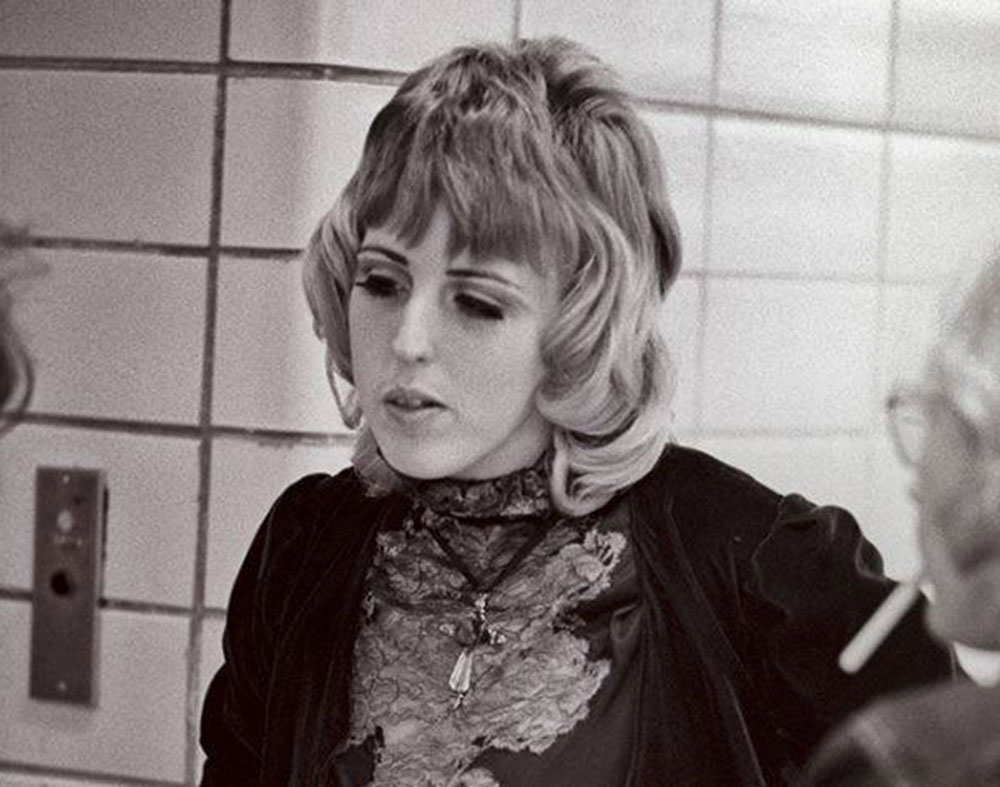 Barbara Cope, Who Toured With The Rolling Stones, Was A Favorite Of Led Zeppelin’s And May Have Inspired Cameron Crowe’s Almost Famous, Is Dead At 67.

Early on Sunday morning, an East Dallas woman tragically died when a fire ripped through her home. Her name was Barbara Cope, and she was 67 years old.

But to a certain set — the rock ‘n’ roll icons of the 1970s — Cope was better known by another name. To that crowd, she was known as The Butter Queen. And The Butter Queen? She’ll live forever thanks to the Rolling Stones.

In 2014, as part of our Songs About Dallas series, Cory Graves wrote about how the Stones immortalized Cope by name-checking her in the song “Rip This Joint” from their standout 1972 Exile On Main Street LP. In Cope’s memory, we’re re-posting an edited version of that story below.

If you’d like to read even more about Cope’s legendary life, we recommend you also check out Robert Wilonsky’s obituary on Cope from earlier this week in the Dallas Morning News. — Pete Freedman

Following a 1971 tour for their well-received Sticky Fingers album, the Rolling Stones quickly cranked out their 1972 double follow-up LP, Exile on Main Street, which has since earned a spot among most critics’ best albums of all time lists.

The album’s second track, a rockabilly-laced scorcher called “Rip This Joint,” is one of the fastest songs in the band’s extremely deep catalog. And while critics like AllMusic‘s Bill Janovitz have pointed to the song as perhaps the earliest example of the psychobilly genre — not to mention one of Reverend Horton Heat’s biggest influences — the song holds far more Dallas history in its lyrics.

Towards the end of Mick Jagger’s missive about what it’s like touring the States from the perspective of a foreigner, he drops the following lines: “Down to New Orleans with the Dixie Dean / ‘Cross to Dallas, Texas, with the Butter Queen.”

The famous “Butter Queen” to which Jagger was referring was a well-known Dallasite — in certain circles, at least — whose given name is Barbara Cope.

One of the most famous groupies of the ’70s, Cope earned her nickname based on her edible sexual lubricant of choice. A post-show visit from the Butter Queen was memorable to say the least — if only for the popcorn-like smell she left behind.

But to say she left a lasting impression upon all the musicians she encountered is, if anything, an understatement. Not only was she famously connected to acts such as Joe Cocker, David Cassidy, Led Zeppelin, Jimi Hendrix, George Harrison, Traffic, Elton John, The Moody Blues, and, if this documentary is to be believed, both members of The Carpenters, most of these also made reference to the “Butter Queen” by name either on stage or in the press. She even makes a six-plus-minute appearance in Joe Cocker’s 1971 Mad Dogs & Englishmen tour film.

But back to the Stones: While Cope is said to have traveled with the band on its 1971 tour, her first encounters with the band came earlier. In notes for the Gimme Shelter DVD, the band’s assistant at the time, Jo Bergman, remembered a particular encounter with the “Butter Queen” at a motel in Texas during the 1969 tour. According to Bergman: “A blonde with straggly hair announced, ‘I’ve got a pound of butter in my purse. Where’s Mick?’ She was the Dallas Butter Queen. Groupies had titles then.”

Indeed, they did. Some of the most commonly referenced groupies of Cope’s day were “Sweet Connie” Hamzy (referenced in Grand Funk Railroad’s “We’re an American Band”), Cynthia Plaster-Caster (famous for taking plaster molds of various rock stars’ penises), Bebe Buell (Liv Tyler’s mom), Elvira (The Mistress of the Dark, duh),and perhaps most famous of them all, “Miss Pamela” Des Barres.

Rolling Stones guitarist Keith Richards remembered the Butter Queen, as well. But, as he claimed in Bill Janovitz’ 33 1/3: Exile on Main Street, he wasn’t as intimately familiar with her work as Mick was. Says Richards: “They did loads of wonderful things with butter, apparently. I used to see them around all the time, but they never buttered me up. I used to avoid them like the plague. Anything that smacked of professionalism.”

Cope, it should be noted, was never all that fond of the term “groupie.” This a point she emphasized more than once in this 1973 interview with the Los Angeles Times.

Explained Des Barres in a 2001 interview with U.K. tabloid The Mail on Sunday, girls like her and Cope were much more than just sex objects. As they both saw it, that’s what the term “groupie” seemed to imply.

“The first thing I’d do was hang up their clothes in the closet when we were on tour and lay out their hair products on the dressing table,” Des Barres says. “Then I’d iron their clothes and perform a sex act to show my affection. I’d make them shirts if the relationship lasted. I really thought of myself as their road wife.”

It’s similar to the mindset that the “band aides” in Cameron Crowe’s semi-autobiographical Almost Famous trumpeted throughout the film. And though most seem to agree that head band aide, Penny Lane, was largely based on Des Barres, there’s plenty of evidence to support the fact that there is just as much — if not more — of the “Butter Queen” in the character.

For starters, consider Penny Lane’s dialogue when she explains to William how she got started down the groupie path: “When I was 14, my mom and her boyfriend took me to a Rolling Stones concert — and I freaked out and I rushed up to the front of the stage and then a thousand people had the same idea at the same time and I was getting crushed. And I couldn’t breathe and that thought flashed through me — almost like a car accident. I thought I might die. And it was in the middle of ‘Midnight Rambler’ and Keith Richards saw me. And he came over, and came to the front of the stage, and he pulled me out. And they took me backstage and they gave me Coke with ice and a — and a lemon. And I never went home.”

According to Cope’s Times interview, her own start as a 15-year-old groupie was eerily similar: “It started in 1965 at the Memorial Auditorium in Dallas. I didn’t care about average boys — I just wanted to meet musicians.”

While that quote alone doesn’t go a long way towards correlating the story, the following passage from Stanley Booth’s The True Adventures of the Rolling Stones would appear to connect the dots. According to the book, at a 1965 Stones concert at the Memorial Auditorium in Dallas, “One girl, kneeling before the stage, kept yelling, Take it off! Jagger lashed her into silence with ‘Midnight Rambler,’ swinging his belt overhead, crashing it down onto the stage. There were shrieks in the darkness as Mick crawled on all fours, looking stark mad in a red spot.”

See! They both mention “Midnight Rambler.” The similarities continue, too.

Says Penny Lane in the film: “We don’t have intercourse with these guys. We support the music. We inspire the music. We are here because of the music.”

Kinda sounds eerily similar to the spiel that Cope gave the Times: “We give them companionship. We understand their music. We give them support when they’re down.”

Then there’s the fact that Cope says several times in that same article that she’s “retired.” That’s something Penny Lane echoes no less than four times in the film.

And, hey, it’s not inconceivable to think that Crowe and the “Butter Queen” were running in some of the same circles in the early ’70s. One of Crowe’s most famous pieces for Rolling Stone was the 1975 cover story he did on Led Zeppelin. Though that likely would have been a few years after Cope had been with the band, the “Butter Queen” was a still a frequent topic of conversation for Zeppelin frontman Robert Plant. Not only did he mention her from stage at several points in the ’70s, but he still seems to bring her up whenever he gets the chance. In fact, here he is in 2010 bringing her up once again in the pages of Rolling Stone.

But unlike some of the musicians she ran with, Cope herself did eventually move on from that chapter in her life. The biggest reasons she gave for giving up the groupie lifestyle? As she explained in both the Cocker film and the Times interview, it was the fact that the next generation of groupies coming up were were 12- and 13-year-olds, which didn’t quite sit right with her.

Of course, depending on which of those two sources you go by, Cope was either 14 or 15 herself when she started carrying around her own butter-filled purse.

But that, says Cope, is neither here nor there. As she argued in the Times, she was just of a much classier sort than the generation of groupies that followed.

“Do you know who you are talking to?,” she said. “I’m in the new Stones album — they sing about me in that album. The Led Zeppelin got up in a concert and dedicated a song to me. I am a lady.” — Cory Graves