The Most Interesting Dallasites Of 2016: Luis Olvera. 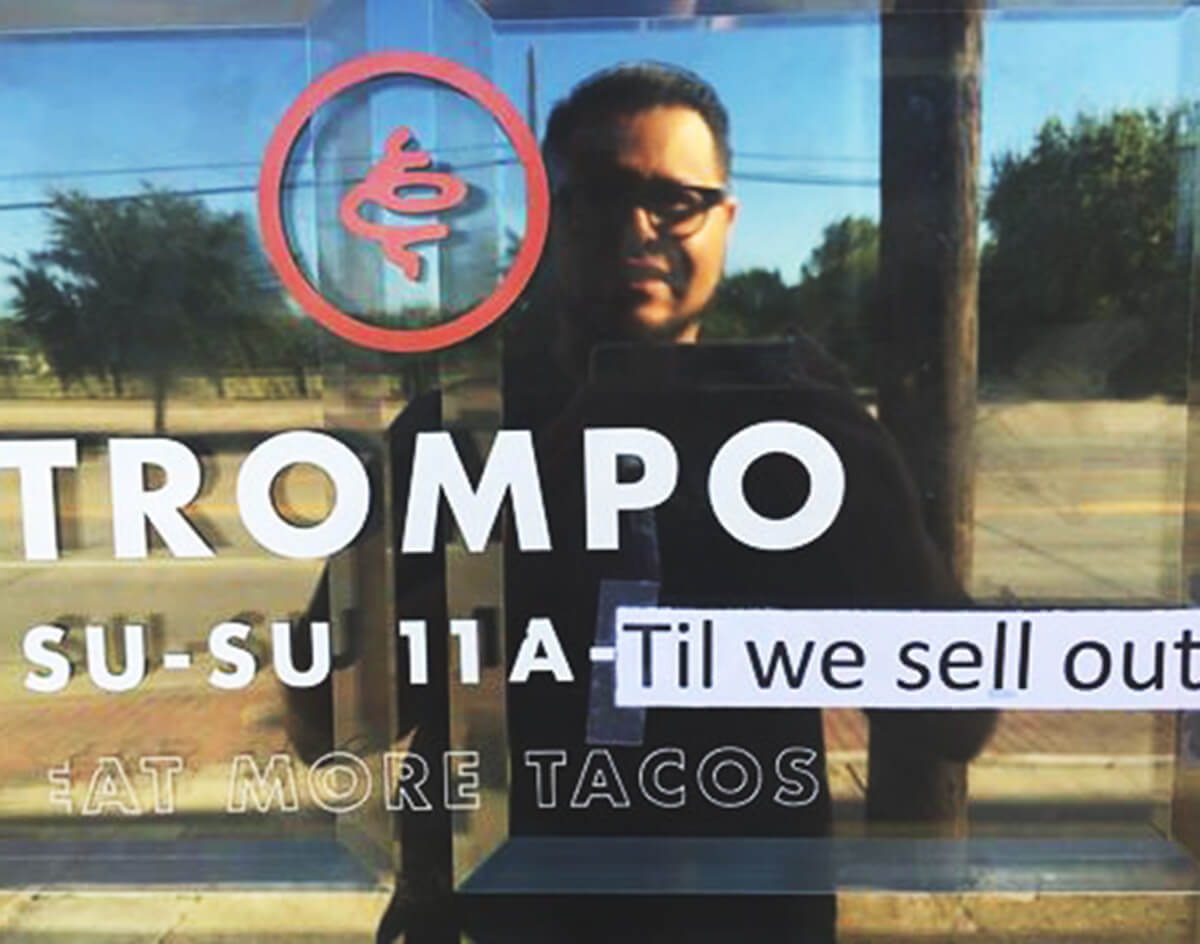 In 2016, Luis Olvera Moved His Taco Business Out Of The Backyard, Inside A Brick-And-Mortar And Into The National Spotlight.

To open a taqueria in a taco market as saturated as Dallas’ is the equivalent of launching a spinning top and hoping that it never tumbles and stops.

But cousins Luis and Carlos Olvera may have found the secret this year, as their tacos and quesadillas de trompo and bistek have done the trick in keeping their trompos spinning. Their spot Trompo opened in West Dallas back in April to rave reviews — the culmination of years worth of brainstorming, ever-growing debts, some tinkering with a 20-year-old recipe and more than just a little self-doubt.

See More In Our Most Interesting Dallasites of 2016 Series:
• Next Generation Action Network’s Dominique Alexander Became A Leader For Dallas’ Frustrated Youth And Minority Communities in 2016.
• Eleven-Year Old Stand-Up Comic Saffron Herndon Appeared on the Today Show in 2015. And, Somehow, Her 2016 Was Even Bigger.

Still, when Luis finally decided to push for an opening late last year, he never imagined that the idea he had kicked around for years would land Trompo on Bon Appetit’s 50 Best New Restaurants list. And he almost certainly never fathomed that by years end, he, his cousin and their business partners would already be working on opening a second shop — news we broke last month — in a new Oak Cliff location.

After his whirlwind year, we sat down with Luis to talk tacos, community and life after food fame.

Let’s start at the beginning. How did the idea for Trompo come about?
I got the recipe from my uncle, who was selling them in Canton. Then I did tacos out of my parents’ house and people were like, “These are so good! You should do this!” I called my cousin and I asked, “What’re you doing right now? What if we pop up in my backyard? Let’s do this!” I took that recipe, and I toyed with it, and I got it to where I felt it was me. Within a month, we had one verbal offer and one guy who took me to see a spot. That got my feet wet and let me know that this backyard speakeasy really could be a blueprint to become brick and mortar.

What was business like before the Bon Appetit article?
We didn’t really have the opportunity to have a slow-and-steady period. It was either the day of or the day after we opened, and an individual came in and she asked me some questions. She turned out to be Beth Rankin, the food editor for the Dallas Observer. She posted us on the Observer, and it was insane. We had so many customers. It just seemed like, every now and again, a really cool blogger would come to the door and post what they consumed, and that would bring more people. Before Bon Appetit, we didn’t have a 50-taco day.

So what happened after that article came out that called you one of the best new American restaurants?
My thought process was that people who were reading this publication are probably not going to even consider a taco. They want really fancy French cuisine. Then August 2 rolls around. People start lining up the door at 10 a.m. — an hour before we open. We sold out of everything by 1 p.m. We opened our doors the next day and sold out again in two hours. By then, friends in the community were calling and asking if I needed help. We were working 22 hours a day, no breaks. It wasn’t until early September that I could hire a staff. It was intense. It was beautiful, but it was definitely not what we were expecting.

Did you have a chance to process the sudden success after the Bon Appetit article was published?
No. I haven’t been able to sit back and enjoy anything — because I’m still trying to make sure that I’m not letting my product and my core customer down. And I don’t have a core customer right now. We have the Latin American family that comes in, or the SMU soccer player who just got out of practice, or the baby boomer who brings his family from New York. We have restaurateurs and chefs who come eat. The only thing that is certain is the fact that a lot of people from across the [Trinity] River and North Dallas visit us.

Do you feel like the simplicity of Trompo has contributed to your success?
We live in a world where everybody feels that they can do everything better than everybody else. My favorite taco shops that I go to have two tacos that I hate and they have 45 things on the menu. I don’t believe in [being] a jack of all trades and master of none. I like focusing on my food and doing the best that I can with it. People say, “You should do chicken,” and I reply, “No, I should really do pork, beef and veggie.”

With the new location opening next year being in a renovated house, it almost seems like you guys are returning to your backyard roots. Would you agree with that statement?
I started out doing the speakeasy, and I value that. I value it because, in Monterrey, you have chains that are really nice, but the best taquerias are on the sidewalk or in somebody’s front yard or somebody’s kitchen at home. I wanted people to have a taste of Monterrey in a safe space. Bt that was shot when our current neighbors got raided by police. If you’re gonna do it, you have to find the ideal spot and I think we found that.

With all the gentrification happening in West Dallas, do you feel it’s important that a Latino-owned business like yours has found success?
I think it’s really cool, and a really funny coincidence that we come into the ghetto, like, worse than Oak Cliff at it’s worst, and it comes into this space shortly before the low-income, the homeless and illegal activities are wiped away. It kind of feels like we’re a bridge to that gentrification. The neighbors come and eat — and they’ll be upset that the taco is $2. We’re not gonna be offended by that. We’re gonna talk to them. That opens us up to welcoming them  and talking to them about the reality of the things that are going to change.

Not counting Trompo, what’s your favorite taqueria?
Without a shadow of a doubt, it’s Revolver Taco. Gino [Rojas] and his family don’t give a shit about the hipster thing. Gino does a taco the machito, and he’s not going to call it “reconstructed goat stomach.” Anything they touch — the simple enchiladas and guisos, anything they make — is super home-oriented. They’re not scared about what they put on their menu. Everything is community and family-style food.

What is your favorite taco?
No bullshit, I eat my taco twice a day, seven days a week, and I still don’t get tired of it. It’s called the Wich, and it’s not on the menu. They called it the Wich because of me. It’s trompo, bistek and paneer and poblano — all three. But not from a specific place? Dude, it has to be a taco de carne asada. A flame-grilled carne asada taco is a backyard taco that you’re not going to find at a restaurant.

When you look back on 2016 and getting your start as a restaurateur, what are your main thoughts?
The food establishment community is so welcoming. The thank-yous will never end, and I will probably never be able to be big-headed. The biggest names come and say it’s amazing. Maybe some people could get big-headed by it, but it humbled the hell out of me. After damn-near going bankrupt, I was able to open my doors and be received by love and attention.