The Half of It. 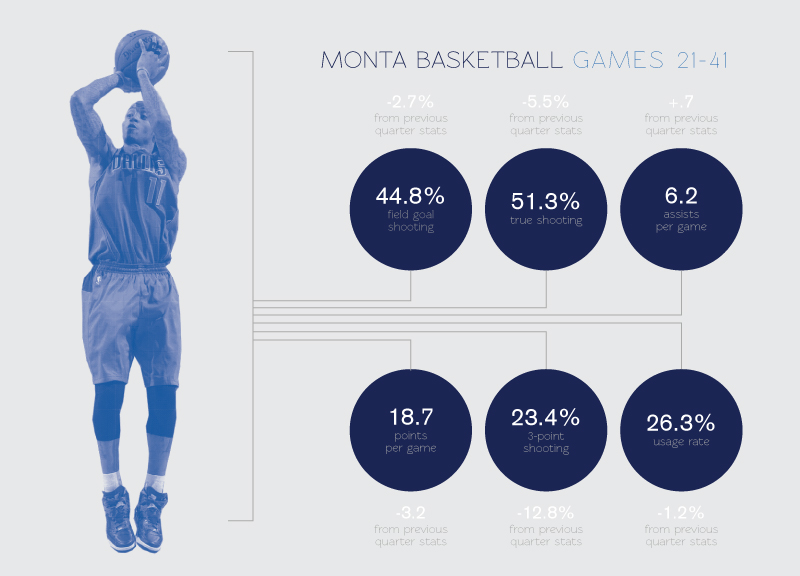 Look Back At The First Half of The Mavericks' Season. Try Not To Worry About The Second.

So: How have the Dallas Mavericks fared over the 21 games since we last checked in? To put it succinctly: Kinda average.

Even though the team reached seventh place in the Western Conference playoffs standings by the halfway point of the season, we've also seen some rather disconcerting trends from this team to this point in the season — and, worse, things that have become all too familiar to the Mavs and their fans.

Spanning games 21 to 41, Dallas posted a record of 12-9. Three games above .500 is a modest mark, but certainly nothing worthy of a Neiman Marcus window display. On the one hand, while the Mavs did have their struggles, they never lost more than two games in a row. On the other hand, they lost two games in a row three times during this stretch of the season.

Losing games is part of any sport, sure. Even the 1995-96 Chicago Bulls lost 10 games. But it's the way in which some of Dallas’ losses have occurred that's been so disheartening.

In at least two games — against the Golden State Warriors and the Toronto Raptors — the Mavericks entered the fourth quarter with a lead and ended up losing the game. Other games, like those against the Los Angeles Clippers, who the Mavs faced twice, were competitive. Yet, the results were again not in Dallas' favor, as leads evaporated and the defense blundered about.

A game that bucked the losing trend — but not the fourth-quarter trend of collapses — came against the Minnesota Timberwolves. This game could just as easily have been a loss for the Mavs, though, as it came down to the final shot for the Wolves, with Shawn Marion blocking Kevin Love's three-point attempt that would have won the game for Minnesota. The call was controversial, but the Mavericks escaped.

Truth time: Lapses and collapses are no way to sustain a winning culture.

So it's no surprise that this has led to questions from the fanbase about the mental tenacity of the team and whether they can make the playoffs. Even Dirk Nowitzki has gone on record to complain about it: “I don’t think we are a playoff team,” he told the press earlier this season, warning that, if the team continues to lose games where they had a decided advantage, the outlook for this year's squad is bleak.

Thing is, Nowitzki is right. It's not just games where the Mavs blow leads, though. The issue is deeper than that. Dallas' defense is just plain bad. There's no way to sugar-coat it. While this has been the case all season, sure, the defense has been increasingly porous of late. At the very least, it has become more maddening.

Dallas continues to allow its opponents to score at will in the paint. The Mavericks allowed opponents to score 43.5 points on average in the paint during this most-recent 21-game period. That is the same mark that they allowed through the first 20 games of the season, yes. But that number remains in the bottom half of the league — and skewing towards the bottom fourth.

But what that number doesn't show is the ease at which teams have been able to get into the paint. Dallas' defensive rotations have been flat and, at times, nonexistent. Samuel Dalembert's lack of a defensive presence has certainly played a factor in opponent successes in the paint; while Dalembert is considered to be a good shot blocker, his ability to defend in the post, rotate, disrupt passing lanes, and help in defending opponents' pick-and-rolls leaves a lot to be desired.

Of course, Dalembert should not solely be blamed for the Mavs' lackluster defensive effort. Defense is a team effort. Sadly, that effort has simply not been there consistently this season, and it continues to allow teams to climb back into games.

There is an old sports adage: No lead is safe. It's a widely used idiom, but for the Mavericks, it is an axiom.

What makes the defensive let-downs all the more frustrating is that they can quickly cancel out a good or great offensive performance. Dallas has one of the best offensive units in the league. In the second quarter of the season, this team averaged 104.9 points per game. That is a remarkable number. But it really isn't anything special when you consider that the offense is the only thing that the Mavericks have going for them. Keep in mind: They gave up 102.3 points per game.

That's a small margin for error — especially when Dallas cannot get any rebounds on top of the fact they cannot get stops.

Not everything is negative, though. Nowizki returned to form during the second quarter of the season. He appeared in 20 of the 21 games, missing one do to an illness. In those 20 games, Nowitzki averaged 21.8 points on 48.2 percent shooting, connected on 41.9 percent of his three-point attempts, making 87.2 percent of his free throws, grabbing 5.8 rebounds, dishing out 3.6 assists, and averaging a steal per game. This from a guy who is 35 years old.

And that is the point: Dirk is 35 and putting up numbers like that. How long can he sustain this level of production? Can he sustain it for the rest of the season? Well, if the Mavs keep playing defense like they have been, he is going to have to.

Nowitzki only has a few more years left in the NBA — perhaps three or four. Our time admiring him is drawing to a close. It’'s unfortunate, then, that this may be the best team he plays on before he finally bids farewell to the game and the fans that have treated him so well over the years.

To be frank, the prospect of another championship for Dirk and the Mavericks is grim. At present, this team is constructed to potentially make it to the playoffs, but little else.

Sure, the term “playoff team” comes with rather positive connotations. It belies the truth, though. If Dallas makes it to the playoffs, they won't make it to the second round.

Still, there remains another half of the season to be played. And, if only for the sake of Nowitzki's career and the team's organizational pride — not to mention the blood pressure of the team's fans — the Mavericks need to come up with some solutions to their woes.

If they can't, it will be another lost season. 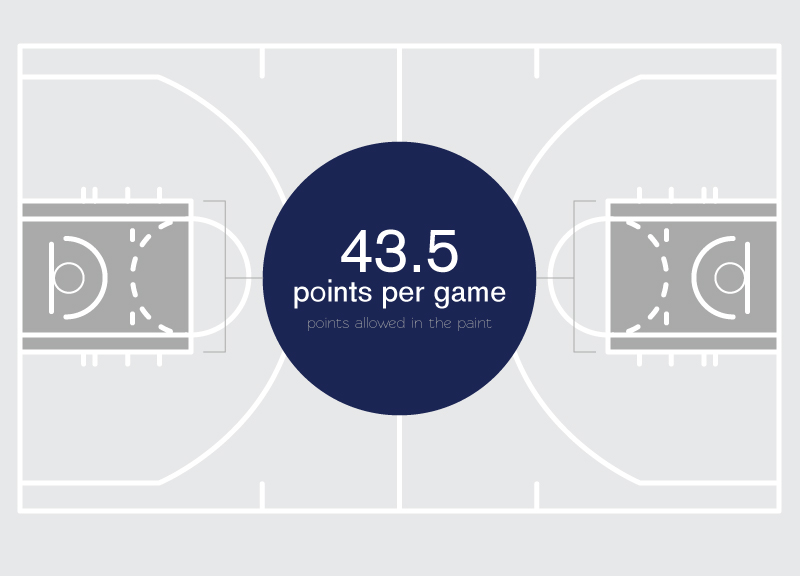 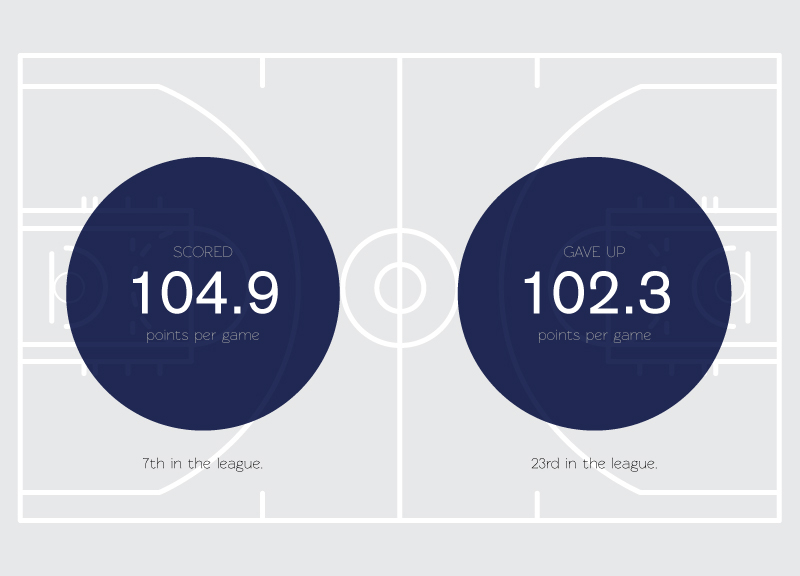 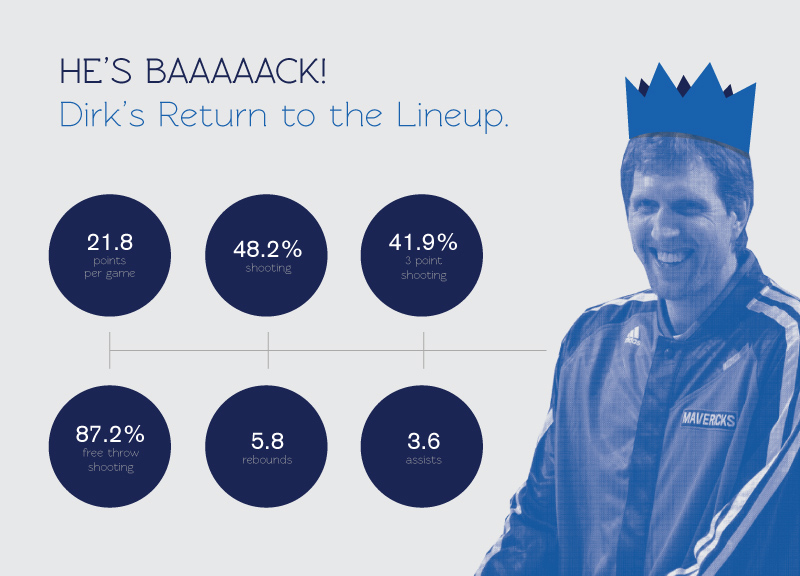 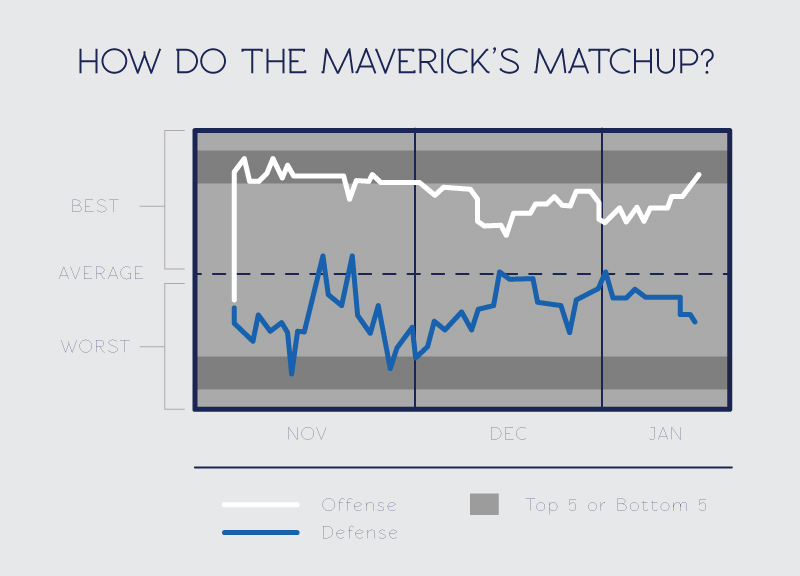