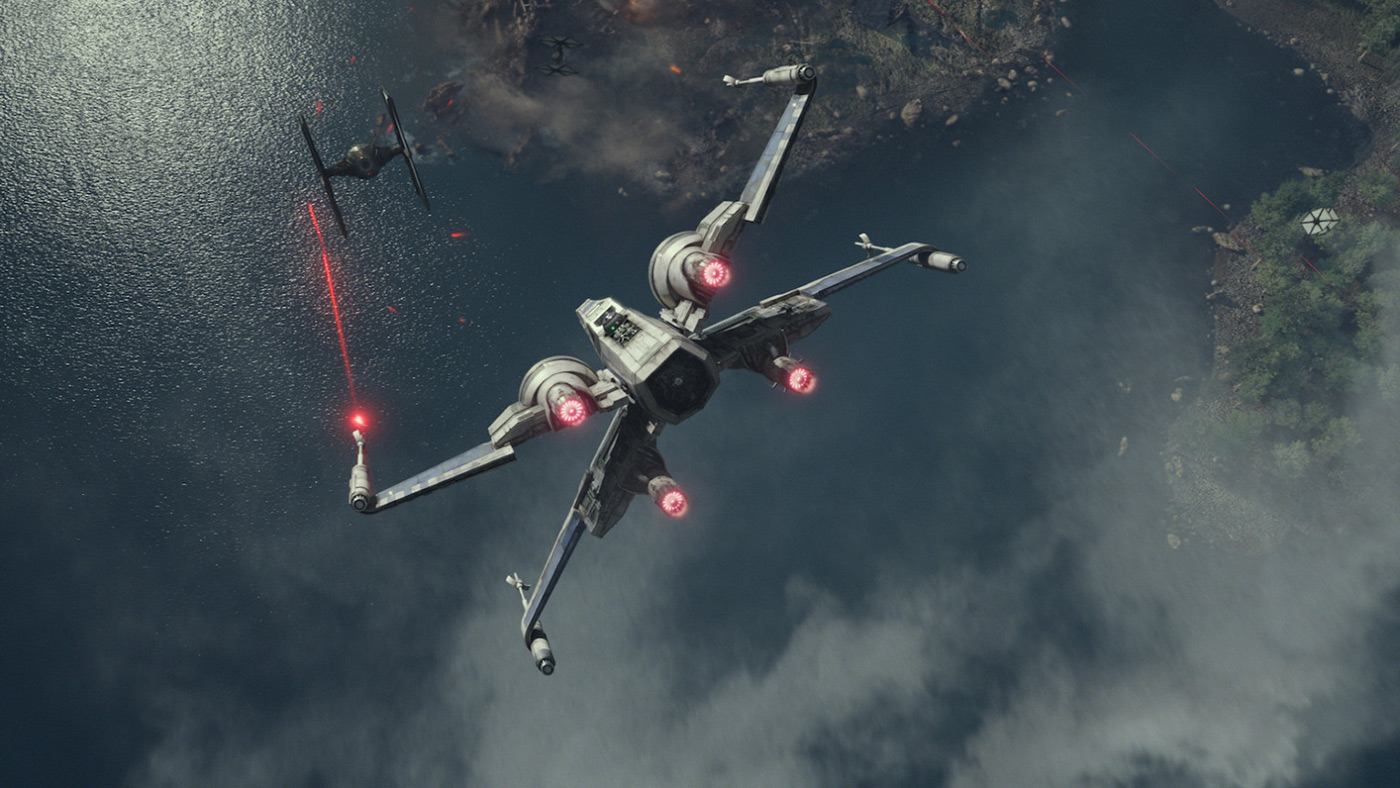 Two Of Our Film Critics Discuss Their Immediate Reactions To Star Wars: A Force Awakens.

Yes, Star Wars: The Force Awakens opens today. Finally, we can stop talking about it in the future tense. All the hype of seeing this movie will finally happen.

It’s going to be huge. No one denies this. But how does this new entry in a beloved franchise hold up to its predecessors? Two of our critics talked after their screening about their gut reactions… at 1:30 in the morning.

Angela Jones: Let’s start with the vibe of the theater because part of the fun of seeing this movie is the opening day madness.

Javier Fuentes: To be honest, I thought it was pretty subdued. I expected a lot more clapping and exaggerated laughter, but our theater was pretty chill.

Angela: It was pretty chill, which I was thankful for. Maybe since we saw the 10:30 showing, we missed out on all the extreme nerds who probably hooted and cheered throughout the movie? I’m not sure. But, to be fair, while it’s acceptable to cheer and whatnot at times, people can get out of hand with that stuff. I thought the lobby had a fun assortment of people, but it seemed pretty chill also. It was pretty crowded, though. There were plenty of nerds to see, and some to smell.

Javier: Well, any time there’s anything remotely nerdy, you can always count on cargo shorts, socks with sandals and questionable B.O. Now, to the good stuff: What were your overall impressions of the movie?

Angela: I thought it was really, really fun! I’m pretty sure I thought to myself about 30 minutes into the film that this doesn’t feel real. Like, there’s no way I’m watching a new Star Wars movie on the big screen. I thought the visuals were great. I like the young cast of Daisy Ridley, John Boyega and Oscar Isaac that they picked to carry this new banner. And I enjoyed the bits of comedy they through into the script. What about you?

Javier: Well, you sat next to me, so you know I was into a lot of the comedy. Far as I’m concerned, Poe Dameron and Finn both need to have their own buddy-Resistance fighter action adventure movie. And the action sequences were great! On the whole, though, the movie left me completely cold. It was such a heartless and soulless remake of A New Hope that was genetically engineered in a Disney lab to maximize the nostalgia factor for neckbeards so they can buy a bunch of figures for themselves or their kids. Gotta hook ’em young, you know? Thankfully, though, there was no obvious J.J. Abrams lens flare here, so that’s a plus!

Angela: I feel you a bit there. I definitely felt like it hit a lot of the same beats of A New Hope. It wasn’t a beat-for-beat remake, though. And I wouldn’t call it heartless. I do wish they would have gone on a different path somehow. I’m curious how this will play into the next two films. I don’t think any sort of film of this magnitude could live up to the expectation it had. If it changed and went down a different path, people would be mad. If they kept it familiar, which is what they did, people will criticize that too. You’re definitely not going to make everyone happy. But even with it being very similar to A New Hope, there’s enough there still to be entertained by and to give hope — no pun intended — for the sequels.

Javier: I mean, sure, it’s not a point-by-point remake. But the beats are there. Desert planet? Check. Scrappy young person wanting to get away? Check. Jungle base planet for the Resistance/Alliance? Check. Someone picking up a light saber that belonged to a character from the previous trilogy? Check.

Angela: Light sabers are precious! You can’t let them out of your sight!

Javier: A character that is probably but most likely not beyond redemption? Check. So anyway, that’s why, whenever a death occurred, I could see it a mile away and it felt cheap.

Angela: True, and I did, too. What did you think of the actors?

Javi: As you said, the young cast is awesome — and all in their unique way. They bring a great energy that definitely wasn’t there in the prequels — even if they are super obvious facsimiles of characters from the previous trilogy. I’m hoping we get to see them shine in the next movie. But, seriously, all three were great. Daisy Ridley played Rey like a self-sufficient bad-ass. I enjoyed the “fish-out-of-water” vibe Finn had going, which contrasted well with Poe’s swagger. How did you like them?

Angela: I especially enjoyed Rey. I thought she had a mesmerizing presence on screen. And for this being her first film? Damn. This girl is going to be a huge star. And Boyega has always been awesome. We’ve loved him since Attack The Block, and seeing him in a much different role was great. Seriously, I think these three can keep this franchise alive and kicking.

Angela: I know, right!? She’s been in some short films, but not a feature.

Angela: I’m interested in seeing how the character of Kylo Ren develops, but I thought Driver was great as the antagonist. He did well with what he was given. I want to see more of Captain Phasma; that character felt completely underused. As for Snoke, its hard to tell with him. I’m curious about his backstory and where he came from. You?

Javi: So, I thought Kylo Ren was cool — until he took off his mask. After that, he became a hilarious whiny brat. How many tantrums did he throw during the movie? It felt like I lost count.

Angela: Well, he’s a young character. He’s not a seasoned leader, and he has many other issues. At least he never shouted, “NooooOOOOooooOOOOOOOO.”

Javier: Yeah, but it feels like we’re getting Attack of the Clones Anakin wearing a cheap Darth Vader costume. It’s actually interesting how Kylo’s mask looks like that of a lesser Vader. His helmet crest is much smaller, and he looks much less imposing. But, honestly, I’m glad I never got any Phasma toys, or else I’d be pissed. She’s like the worst parts of Darth Maul, Grievous and Boba Fett, combined: Bad ass design, and zero importance to the plot.

Angela: For reals. Thought we would see so much more of her.

Javier: I hope she gets more development. So, what were your thoughts about the story in general? I felt that, between not knowing what the deal with Snoke is, and even the ending, it made it seem like an incomplete story.

Angela: I thought it was an overall solid beginning to this trilogy. It’s definitely world-building.

Javier: It’s no Avengers: Age of Ultron, but at least it told a full story without derailing the plot.

Angela: Agreed. It does a better job than its cousins, The Avengers. Would you see this movie again?

Javier If I was on a budget, I’d see A New Hope (non-Special Edition version) on VHS first. But I know I’ll see it again. I can say at the very least that it’s a fun movie to watch. J.J. rocked the hell out of the action.

Angela: Yeah Abrams did rock it. I cannot wait to see what Rian Johnson will do with the next film.

Javier: Oh, and I loved how the light saber battles were more akin to the Original Trilogy (OT) than the crazy Spider-Man acrobatics of the prequels.

Angela: Those light sabers looked amazing. They actually had weight to them!

Javier: Also, give it up for my man BB-8! He was awesome.

Angela: The best! Stole the film. Also, a great wingman.

Javier: Mind you, he’s not as great as Chopper from Star Wars: Rebels, but damn I’m glad I got one of those Sphero BB-8s. So totes adorbs. I’d want BB-8 with me at the bar.

Angela: Same. Anyway, I’ll probably see it again too. It was a fun experience to get engrossed in that world again. And, unlike Episode 1, I am excited to see what the next two movies, and the spinoffs do with the story.

Javier: I guess I’m of two minds. On one hand, this was neat and I want to understand Luke and Kylo’s whole deal and follow the new kids on more adventures. On the other hand, I’m worried it’s going to be nothing but nostalgia. I can’t believe I’m saying this, but the prequels were super flawed and misguided…

Javier: But they were Lucas’ vision and they contained some interesting allegorical and metaphorical weight to them, even with shitty lines like “Hold me like you did on the lakes of Naboo.” These movies feel like they were made in a super corporate environment, and they don’t feel like a single person’s vision. They feel like a product that’s been carefully packaged. So I’m not sure if I necessarily want to see more of that. I’m not even sure if a unique director like Johnson will be able to have a voice in this big <em machine.

Angela: Yeah, I can understand that worry.

Javier: OK, before we wrap up. Do you have a favorite moment?

Angela: There are some little things that BB-8 does that made me laugh out loud. And the action sequence with the Millennium Falcon and everything leading up to it was pretty awesome. You?

Javier: I would have to say that it’s when Poe and Finn first get together. It was so enjoyable to see these two actors bounce off each other.

Angela: So as a final note, what grade would you give this film?

Angela: I liked it, and I’d see it again, but I can see the flaws. Still, everyone will see this no matter what anyone says.