The Best Displays Of Christmas Lights Around Dallas. 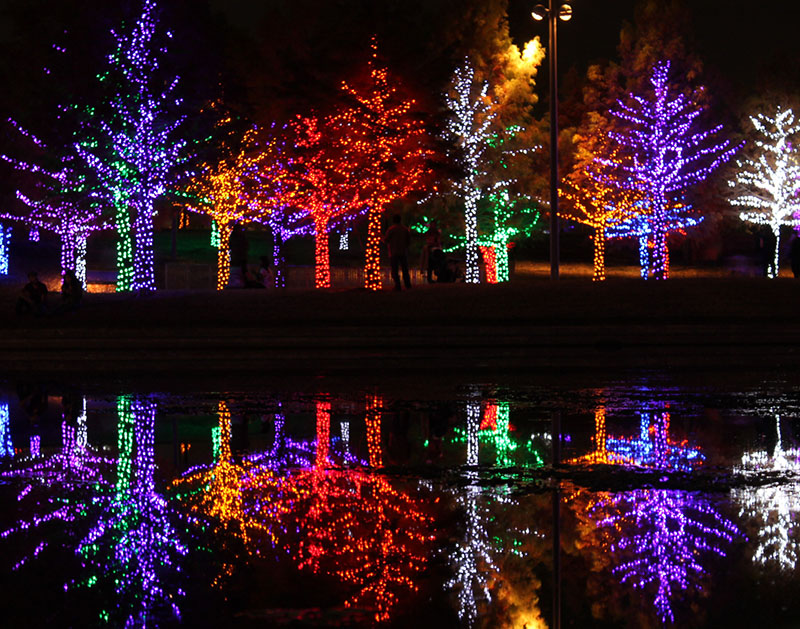 Dallas And Its Surrounding Areas Bring It When It Comes To Hyper-Festive Displays Of Christmas Lights. Here Are The Best Spots For Getting In The Spirit.

It’s beginning to look a lot like Christmas around here, what with various neighborhoods and shopping centers around North Texas having adorned their exteriors with literally millions of Christmas lights of all colors and fashions and to varying degrees of brilliance.

Dying to get into the holiday spirit yourself? Heading around to check out the region’s finer Christmas lights displays will do the trick, especially if it’s at one of the below spots.

Perhaps the best light show in the North Texas region, Vitruvian Lights lets you can wander through 12 acres of 550 illuminated trees wrapped in 1.5 million LED lights. To add to the spectacle, the lights brilliantly reflect on the surrounding body of water. That’s pretty unique — and makes for some killer selfie-taking opps. Better still, it’s free to the public. The display runs through January 1.

Grapevine proclaims itself the Christmas Capital in Texas, and it just might be, what with 1,400 Christmas-themed events each year. The crowd jewel is the Parade of Lights, where 100 lighted floats parade through the Dallas suburb’s streets. The event is free and kicks off at 7 p.m. on Thursday, December 7, in the heart of Historic Downtown Grapevine.

Baseball season is over for the Texas Rangers, but you can still make your way to Arlington for Enchant Christmas. This spectacle featuring the world’s largest Christmas lights maze runs through December 31. The two 25-foot LED light reindeer are also a sight to be seen. Bring some cash, too, as some 85 vendors are on site, selling holiday-related goodies. Admission costs $29.95 for adults, and $21.95 for seniors and children aged 5 to 14. Kids four years old and under get in free.

Ever wanted to see an elephant, giraffe or zebra covered in LED lights? Well, LED lights will not be attached to the real animals here, sorry. But you will get the chance to see life-sized replicas of those animals covered in LED lights at the Dallas Zoo’s first-ever Christmas lights display, which promises 25 acres of lights across the zoo. The display will be open every weekend and select weeknights through January 2. Admission will run $15 for adults and $12.00 for kids and seniors.

The rich and mighty, believe it or not, will let you have access to their neighborhood for the grand Christmas lights displays its inhabitants put up. Walk or drive through the streets of Highland Park at Preston, Mockingbird, Preston and Armstrong. The organized displays run through January 7.

Christmas in the Square, Frisco Square

It’s recommended you tune in to 107.3 FM, while driving around the 175,000 lights set up around Frisco Square. Why? Because it will let you hear some nice Christmas tunes paired to the display. In the mood to walk instead? OK, then you can listen to the music piped through speakers around the Square. Either way, it’s a nice relaxing vibe. Also, for only $12, you can ice skate in an outdoor ice rink. This display is up through the last day of December.

More than two million lights will illuminate Fair Park until January 7. Guest will have the chance to see an eye-popping giant illuminated display featuring Santa Claus, swans and more. It probably won’t snow in Dallas, but you will get the chance to throw snowballs here and slide through Santa’s Arctic Slide ride. Tickets are $20 for adults, $12 for children ages 3-12 and free for children two years old and under.

Drive through 500,000 animated display lights that will feature holiday displays and some U.S.- and Texas-themed patriotic lights. The tour begins at Valley View Lane and I-35, and continues south on Denton Drive through to Farmers Branch Historical Park. Event is free.