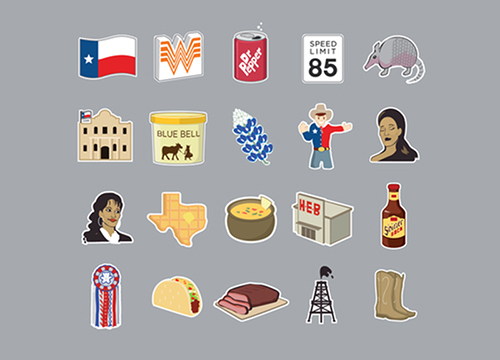 The Taco Emoji Is Finally Coming, And It's Bringing More Texas-Themed Emojis With It.

Taco Bell has been clamoring for a taco emoji for some time now. From starting a Change.org petition six months ago to making a T-shirt for the cause, they've really been working hard at this. They basically even begged Unicode for the inclusion of the taco emoji — but, alas, to no avail. Unicode clearly gives no shits about Taco Bell: When a few new emojis were added to the keyboard with the iOS 8.3 update, the taco emoji was still nowhere to be found.

Turns out, Taco Bell was just asking the wrong people. Texas-raised pals Sean Compton and Rich O'Toole came up with the idea for TexMojis about a year ago and, after deciding on a few icons they wanted, they commissioned the help of Houstonian Ted Borel to illustrate them. More recently, the Austin-based app-design agency Rocksauce took on the project, which is currently finished and awaiting approval from Apple for iTunes store placement.

And, yes, the taco emoji is in there — just as it should be. Also included? Whataburger and Blue Bell emojis, among others. Seriously! Below are just some of the TexMojis we can expect:

Uh, this is pretty amazing. I mean, just think of all the texts you'll be able to send now! Having trouble thinking of some yourself? No worries. We got this.

• “Yo, this Torchy's [queso emoji] tho! OMG.”
• “Let's go get some [H-E-B emoji] tortillas. Or some [Whataburger emoji]. Or both?”
• “I feel like [Blue Bell emoji] should just let me choose if I want to risk getting sick or not. This is [Texas flag emoji], man.”
• “I picked a [bluebonnet emoji]! [monkey with hands over mouth emoji]”
• “[85 speed limit sign emoji] and you know I'm still speeding. God bless [Texas waffle emoji, maybe?]
• “I don't fuck with [armadillo emoji]s. Them shits have leprosy!”
• “Will you go to homecoming with me? I'll make you a big-ass [mum emoji], promise.”
• “Howdy, y'all! [Big Tex emoji]”
• “Let's go to San Antonio and make jokes about the [Alamo emoji] basement to tourists.”
• “These other states just jealous because they ain't got our [Shiner emoji].”
• “Do you prefer [Dr Pepper emoji] or Dublin [Dr Pepper emoji]?”

The possibilities are endless!

Update on June 16, 2015: No more waiting, y'all. The app is available for download here through iTunes. Time to start texting them tacos!