Summer Better Than Others. 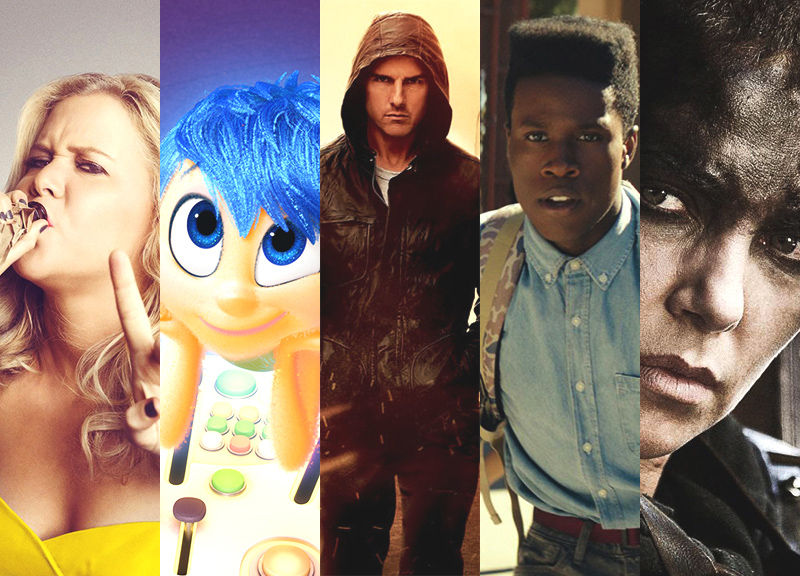 Critics Roundtable: On The Summer's Best and Worst Movies.

All summer long, our film critics have sacrificed their time for the betterment of yours. They've taken in everything that Hollywood has thrown their way, processed all of it and tried their darnedest to show you the way to the good stuff and the routes around the not-so-great stuff. Still, somehow, Jurassic World ended up being a big hit. Oh well! Here, our critics — Javier Fuentes, Angela Jones and Kip Mooney — give their final takes on summer's now-finally-done big push by looking back at it en masse.

Kip Mooney: For me, and I imagine a lot of people, summer movies are often judged on a different rubric. I don't have to be engaged on every level. It's too hot outside and (until this year) there's nothing good on TV. So summer movies (even more than usual) are chances to escape. Like a return trip to the fridge, my standards are lowered.

So color me pleasantly surprised that there were plenty of examples of summer tentpoles that went above and beyond the “entertaining” requirement.

For starters, Mad Max: Fury Road was an absolute blast, but one that unabashedly reserved its most badass acts for women. It also happened to have exhilarating special effects in an age when effects are taken for granted.

Lets not for get, either, that Inside Out brought Pixar back to elite status, thanks to an emotionally complex coming-of-age tale hidden inside an explosively colorful, deceptively simple story.

But the movie that hit me so supremely in my pleasure center was Mission: Impossible – Rogue Nation. That franchise has gone on far longer than it should have, yet each new installment finds a way to top the previous chapter. (Except the second one, which has all but disappeared from my memory, and for good reason.)

But what about y'all? What had you reaching for the popcorn this summer?

Angela Jones: Summers for me are greeted with anticipation. Not only do I get them off from work (the perks of being a teacher!), but the plethora of fun and entertaining movies coming out keeps me pretty busy.

That said, the summer season can sometimes end up being a letdown with only one or two films standing out as really being worth seeing.

This summer's selection, however, was rather consistent in its variety and depth. Almost all the action films were entertaining — Avengers: Age of Ultron, Ant-Man and even San Andreas had its moments — but, like you pointed out Kip, Mad Max: Fury Road completely obliterated what it means to be an action film in my mind. Turns out, you can have a kick-ass action film with depth and dynamic characters! Who knew?!

But, really, I want to talk about the comedies that I really enjoyed: Spy and Trainwreck. Normally, summer comedies miss the mark in that they just use crude humor and fart jokes to make money. But both of these films were different. Not only did they have strong and funny female leads, but they added a fresh perspective on their respective genres (spy films and romantic comedies), too.

Of course, the summer cannot be complete without an animated film, and I agree that Pixar is back to its genius game with Inside Out. I cannot gush about this film enough. It's so stinking smart. Emotions are confusing for everyone, and Pixar not only found a way to explain how emotions can work (why you might feel joyful but then turn sad), but they also captured the essence of growing up and dealing with major life changes.

I could clearly keep gushing about it. But what did you think of the summer season, Javi?

Javier Fuentes: I’ll be honest. This was a pretty forgettable summer in terms of blockbuster stuff. Thanks to the very weak Disney/Marvel movies, it seems in my mind that 2015 might be the year where the superhero movie bubble starts to deflate if not all-out pop. Age of Ultron and Ant-Man were each lackluster in their own way, and while I actually dug Fantastic Four, it had a lot of problems too.

Would it be too sassy if I said that instead of watching most of the big movies, I just re-watched Mad Max: Fury Road as much as I could before it left theaters? Echoing your sentiments, Fury Road was, for me, the movie of the summer — if not the year so far. Its mix of great action storytelling and the seamless way it combines CGI and practical effects was thrilling. And, of course, Charlize Theron's Imperator Furiosa was just not to be beat this summer.

The only other thing that came close for me as far as a in-theater experience goes was Mission: Impossible – Rogue Nation. And, even then, I've already forgotten what the hell that movie was about.

Mostly, the smaller movies caught my eye. Stuff like Spy, Dope and even the Dragon Ball Z movie made for a much more memorable or at least enjoyable movie-going experience in my mind.

Inside Out did, as the kids say, give me all the feels, though. The visual storytelling in that movie is so smart and interesting. It gives me up hope for Pixar's next go, The Good Dinosaur, which is due out around Thanksgiving.

Anyway, I'm sorry to be downer here, guys! On the bright side, I had plenty of reasons to check out older movies and fill in some gaps in my movie watching. Have you guys ever heard of this David Lynch guy? His movie Eraserhead is pretty neat. I think he'll go places!

Kip: I hear ya, Javier. I have a “to watch” list a mile long. Were there any standout scenes that really stuck out for you this summer — even if it was from a movie you might not have loved? I've got a few.

Like, the assassination attempt at the Vienna Opera in Mission: Impossible – Rogue Nation? That's a masterclass in tension right there, even with very little dialogue. And it's hilarious, too, thanks to Simon Pegg.

I also really dug the scene in Fantastic Four where Doctor Doom goes on a telekenetic killing spree. I got some serious John Carpenter-esque vibes from that. It made me wish the rest of the movie could have straddled so well the line between unsettling and cool.

Javier: One of the most memorable scenes for me was when N.W.A. played “Fuck Tha Police” in Detroit in Straight Outta Compton — just because there's such a punk rock energy to the way they shot it.

There's of course the scene in Fury Road, too, where Max hands Furiosa the rifle because she's a better shot.

I will also say that I enjoyed the few scenes in Age of Ultron that involved Hawkeye's domestic life. We never get to see the heroes just chilling at home, and this gave another layer of depth in my mind.

Finally, I dug the hell out of the end-fight sequence in Dragon Ball Z: Resurrection F with Goku versus Freiza because it felt like I was 12 again. But I'm pretty sure I'm alone there…

Angela: Yeah, I think the rest of the universe was too busy watching Jurassic World to catch that one, Javi.

Unfortunately, that movie was far and away my biggest disappointment from the summer. It had all the promise to recapture the movie magic of the first film in the franchise, but it was too much a carbon copy — and without the practical effects. There were some cool sequences, I'll admit, but the film ended up just being forgettable. The dinosaurs had no real weight to them, and Bryce Dallas Howard tried as hard as she could but was just given such weak lines and almost no character arc. It ended up being nothing special or even all that memorable in a summer of great action films.

Javier: For me, the biggest disappointment would definitely have to be Avengers: Age of Ultron. The titular villain is horribly underdeveloped and — nerd alert — he just doesn't live up to the legacy of the character. Not only that, but the movie stands as a symbol for how serialized, comic-book style storytelling doesn't always work for movies. This film spent way too much time referencing its set-ups from previous movies and then setting up the storylines for, like, six new movies that are on the way. It forgot that it had to have its own good story, too.

For all my griping, I will say that this summer produced two films that will definitely be making my top ten at the end of year — Mad Max and Inside Out.

Kip: I'm with Angela in that I found Jurassic World to be nothing special. It was a perfectly forgettable summer action movie, and the fact that it's currently the third-biggest movie of all time just completely boggles the mind.

I give Age of Ultron a little more leeway. It had its fair share of problems, but I found James Spader's sassy performance as the bad guy to be one of its bright spots.

Not to beat a dead horse, but my biggest disappointment would have to be Fantastic Four. Whether it was studio interference, a lousy script or a director in over his head — something tells me it was all three — it's a shame this strong cast was wasted on a movie that starts out strong enough only to utterly fall apart in its second half. Really: The entire climax of the movie consisted of Miles Teller yelling what was happening onscreen. The pieces were there to make something distinct, but what we got was distinctly awful. Could they fix a lot of problems and make a good sequel? Absolutely. But I don't expect anyone will be getting that chance anytime soon.

Overall, I think this summer offered a bit more variety than last summer. Its real winners (Inside Out and Mad Max: Fury Road) will be discussed for years to come, I have no doubt.

But compared to last summer — which offered such highlights as 22 Jump Street, Edge of Tomorrow and Guardians of the Galaxy — I'm with you, Javi. The real value was in the off-the-beaten path stuff. Dope, The Overnight and Love & Mercy each have staying power in my mind. Unfortunately, too few people probably saw those films.