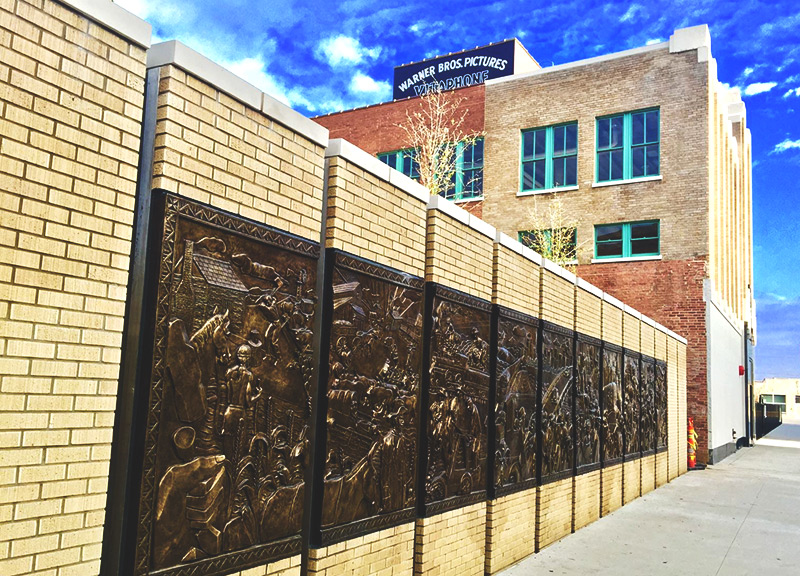 Dallas’ Museum of Street Culture Will Challenge How We Look At Museums.

Shot over two and a half years, Serving Second Chances is a documentary film about the homeless in Dallas and how they interface with The Stewpot, an organization that offers resources and opportunities for homeless and at-risk individuals. Last Thursday night, the film was shown at a sold-out screening at the Angelika as part of the Dallas VideoFest 28. Musician Gerald Williams, one of the film’s principle characters, performed after the film. On November 5, a shorter version of the film will be released for television broadcast on KERA’s Frame of Mind series.

Still, last Thursday night’s screening is notable for the fact that it also stands as the inaugural event in the life of the still-taking-shape Museum of Street Culture.

The museum began to take shape a few years ago when local filmmaker and author Alan Govenar was approached by Carol J. Adams on behalf of what was then called the 508 Park Project Committee with the idea of helping to conceive a new museum. The Stewpot had just acquired a perfect spot for such a concept — the famed 508 Park Avenue building located right across the street from its own headquarters.

This new property oozed with history. It opened in 1930 as a Warner Bros. film distribution hub for the theaters that lined Elm Street at the time. Later that decade, when Warner Bros. got into music, famed bluesman Robert Johnson recorded his second of only two known recording sessions in the building. Bob Wills, the king of Western swing, also put his first songs to tape in the same space. As music landmarks go, few can claim as much history as can 508 Park.

Immediately upon his first meeting with The Stewpot, though, Govenar determined that the proposed museum be about more than just music.

“I was very impressed by what The Stewpot offered to homeless and at-risk people,” Govenar says now, as his still-nebulous museum begins its introduction to the public.

And so he sold the 508 Park team on the concept of a museum highlighting street culture — an idea that, to hear Govenar tell it, “”is on the cutting edge of what’s going on in the world today.”

More than that, while street art may be showing up in galleries, there aren’t many museums in the world devoted to overarching concept of street culture, the very context for that art.

Govenar’s vision for the Museum of Street Culture is an expansion of The Stewpot, one that focuses on the homeless and the art they create. This means an incorporation of live music performances, emerging art forms, art exhibits highlighting current street culture and even workshops as part the overall concept.

“Clearly, the music of the 1930s gave voices to the voiceless,” Govenar says in reference to The Great Depression. “Everyone was touched by homelessness.”

Just what physical form the Museum of Street Culture may take is still uncertain. It currently has no official open date and, of late, it has grown considerably into part of a larger project called Encore Park that also encompasses an amphitheater and a community garden.

For now, the Museum of Street Culture will exist mostly as a curatorial arm for Encore Park events. The Museum of Street Culture’s music series, which kicked off with Gerald Williams’ performance at the Serving Second Chances screening last week, will attempt to help the public understand the notion of street culture from different vantage points by highlighting the traditions that developed on the back roads and sidewalks of small towns, suburbs and cities.

The next event in that series will be the 508 Park Fiddle Contest on November 7. Organized in association with the Texas Old Time Fiddlers Association, which sponsors fiddle contests all over the state, Govenar hopes the event will be the first in an annual tradition, if only because it fills a need. Says Govenar: “There hasn’t been a fiddle contest in Dallas for decades.”

In the spring, the Museum of Street Culture will along the same lines host The Big Squeeze, an accordion showcase presented in association with Texas Folk Life in Austin.

Also planned for the spring is a collaboration with the radio show American Routes, which will focus on various aspects of street music. The lineup of performers is yet to be announced, but Govenar is working with that radio show’s host, Nick Spitzer, to curate the event. The show will be recorded and used as part of a national American Routes broadcast.

“It cuts across a broad demographic,” Govenar says of the entire concert series. “Not only in terms of its geographic roots, but in terms of it being for all ages. The idea is to create a mix of people.”

Govenar hopes too that these events will keep an eye toward the still-working Dallas street artists of today. Hence why he wanted to feature Williams in his first MoSC event. Govenar met Williams at a Robert Johnson sound-a-like contest at The Stewpot that commemorated the 75th anniversary of Johnson recording at 508 Park. As Serving Second Chances shows, Williams won the contest with an improvised song. Watching him perform, Williams’ talent as a blues musician is undeniable — and yet that film opens by showing another side of his life, with him lying asleep on a bench across from Dallas City Hall.

“This is so out of the box,” Govenar says of what he hopes to accomplish with the Museum of Street Culture and Encore Park. “It’s an ideal to pursue. There’s great possibility here.”

If all goes accordingly, the Museum of Street Culture will challenge what we traditionally think of as a museum. The street is a metaphor for movement and interaction, and that recurring theme in Govenar’s massive body of work rears its head here, too. Ultimately, though, he hopes the museum will bring people together.

“There is hope,” says Govenar. “We can have a better world. We just need to pursue it.”