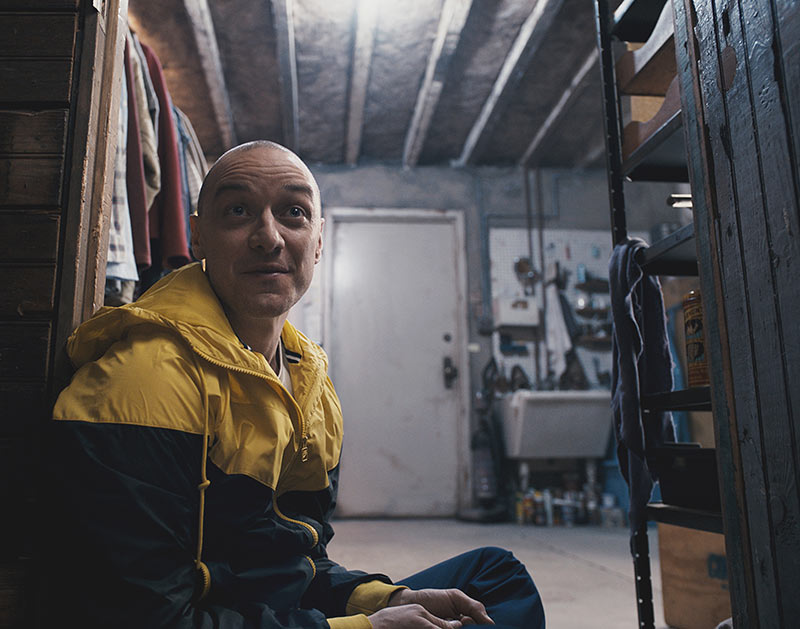 M. Night Shyamalan Bounces Back Some With The Multiple Personality Horror Film Split, Thanks Mostly To A Stunning Performance From James McAvoy.

It’s been 17 years since director M. Night Shyamalan broke through into the mainstream with The Sixth Sense. In that time, he’s gone from being hailed as a Spielberg-ian pop auteur to being ridiculed after too many failed attempts to recreate his earlier success.

But it seems that constant ridicule and failure fuels the man at least a tad — because, recently, Shyamalan has been having himself some fun with schlocky genre movies that suggest he might have finally found his calling.

Split is the latest entrant into this period of Shyamalan’s career.

The premise here is that a man named Kevin (James McAvoy) has a mental illness so severe that his mind has split (get it?!?) into 24 totally different personalities. When the movie starts, we see the man kidnap three young women for completely unknown purposes — but you know it can’t be good.

Refreshingly, instead of relying on his earlier “What a twist!” M.O., Shyamalan playfully uses Split to subvert genre expectations. Whether it’s character beats, dialogue or even the refreshingly restrained plot itself, Split comes across as a film in which Shyamalan’s grasp has met his reach.

For one, the three ladies — Claire (Lu Richardson), Marcia (Sula) and Casey (Taylor Joy) — don’t fit into any type of mold and are neither typical mean girls nor angsty types. And while the movie indeed hits the ground the running, it also ebbs and flows with its pace as it progresses, giving us a bit of a peek into Kevin’s issues through his therapist Dr. Fletcher (Betty Buckley), and then coming back to the kidnapped girls until the movie explodes in an insane climax that will have you reeling for days.

To be sure, all of this feels like a platform for the real star of the movie: James McAvoy. Through one of the all-time great genre movie performances — a career-best for McAvoy — Kevin’s multiple personalities present a challenging and precise exercise in acting. In the world of the movie, each of Kevin’s personalities are so distinct that they all take on different mannerisms, ages, sexes, intelligence levels and even clothing styles. And it’s just astounding to see McAvoy seamlessly switch between these personalities; from the way that he moves, to the cadence in his voice and even his eyes, you actually start to believe that he is a different person at each pass.

What’s really fascinating is that, despite Kevin’s malevolent nature due to his illness, the movie has a surprisingly kind outlook on mental illness, in large part due to Dr. Fletcher’s research. She posits that fractured psyches can actually lead humans to have downright supernatural abilities, and that this is the next natural step in human evolution. Given that most horror movies just feature a “crazy guy” who is evil for no real reason, this is a welcome change.

Of course, the movie is not without its problems. For a PG-13 movie, it deals pretty heavily in pedophilia and sexual abuse, and most of it is downright sleazy and without a big pay off. And, OK, sure: There is a twist that’s as groan-inducing as it is fun, capturing on a specific zeitgeist that kind of undermines the movie’s greatness.

Still, Split is as thrilling as it is creepy. It’s a truly original story and a welcome change-up for fans of Shyamalan.

Grade: B.
No more articles