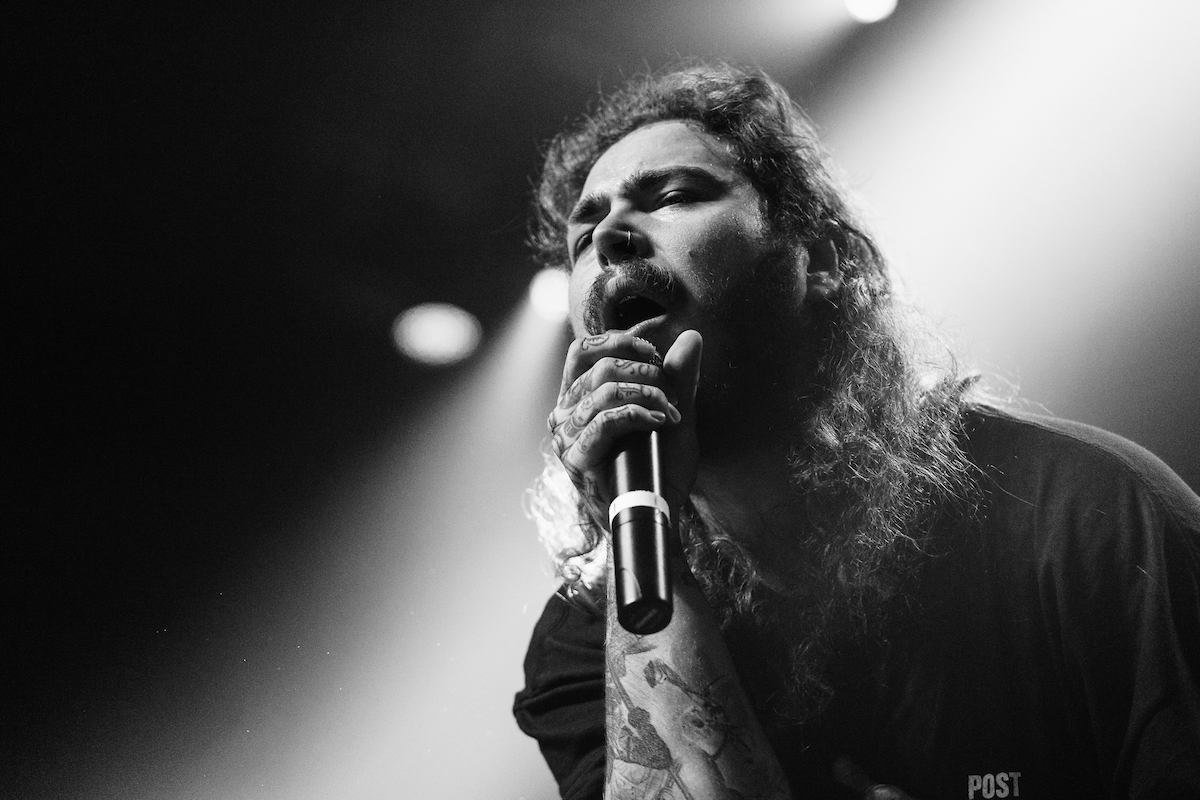 Post Malone – “Psycho (feat. Ty Dolla $ign)”
RIYL: Songs that name-check Tony Romo.
What else you should know: On June 14, the Grapevine-sprung Post Malone will he joined by 21 Savage, his partner-in-crime on the now-triple-platinum hit “rockstar,” for a show at The Pavilion at Toyota Music Factory in Irving. Tickets went on sale today for that show, which will go down in the town where the Cowboys used to play — a fact we’re sure Yung Posty knows well, considering how his dad Rich Post is the assistant food and beverage director for the team. Anyway, this is all relevant because Post name-checks former Cowboys quarterback Tony Romo in the hook of this, his first song single since “rockstar” and his next single off his sophomore, and soon-to-be-released, Beerbongs & Bentley‘s LP. By our count, this is at least the 30th rap song to name-check No. 9 — that’s impressive! Ty Dolla $ign, playing collaborator on this track, will not be on that Irving bill. At least not so far as we know. — Pete Freedman

Ian Salazar – Songs About Love n’ Shit Vol. 2
RIYL: Belated Valentine’s Day tunes and shit.
What else you should know: Majik Taylor and Acid Carousel member Ian Salazar’s vocals and songwriting are much more endearing and tender than the title of this solo project lets on. The five songs here are sweet, wonderfully performed and a testament to Salazar’s potential, which feels boundless. — Mikel Galicia

Lord Byron – “Vick”
RIYL: Blue flames on the foreign.
What else you should know: The incomparable Lord Byron is back with a new collection of tracks on deck, but before his Sora album makes its arrival on February 28, “Vick” gives listeners a chance to hear a song that’s more accessible than the avant-garde style of hip-hop we’ve heard from past releases Digital Crucifixion and We Kill Cowboys, So Death Rides A Horse. But the cerebral wordplay is definitely still present here in this song, and t more than builds anticipation for the upcoming release. — MG

Kacey Musgraves – “Space Cowboy”
RIYL: Things that are otherwise known as “Gangster of Love” or “Maurice.”
What else you should know: Golden’s Own Kacey Musgraves is gearing up to drop a new LP fittingly called Golden Hour on March 30, and she’s been talking up in the press the fact that her new album’s songs have been influenced by acts as diverse as the Bee Gees and Sade, the latter of which can be heard in this, the better of two tracks she released today (head here to hear “Butterflies”). While the song’s definitely more ethereal the most Musgraves material, it’s no less clever lyrically. The name “Space Cowboy” may nod toward a popular song from another local — shout out to the Woodrow Wilson High School class of ’61! — but in Musgraves’ hook, if not in her title, there’s a comma between where those two words appear. Hear her play it live when she opens for Harry Styles (what?) at the America Airlines Center on June 5.

Saudade Sisters – “Where You Are”
RIYL: When binge-watching inspires pilgrimages.
What else you should know: We’ve seen a lot of this lately around here, but Claire Morales and Jena Pyle’s “Where You Are” is yet another Twin Peaks tribute through and through — from the VHS-inspired video filmed at Snoqualmie Falls (as pointed out by D Magazine’s Lindsey Knecht) to the guitar chords that are directly adapted from Angelo Badalamenti’s iconic theme. But the strengths of the song don’t lie on the Twin Peaks influences; rather, they fall on the lush and dreamy vocals from the duo that makes up Saudade Sisters. — MG

EMOtional Xan – “Gothwhore (Feat. Pyrex Pirates)”
RIYL: Fetishizing Mona Lisa.
What else you should know: The title alone is enough of a warning that there’s nothing sweet about this track. But, nonetheless, I can look past the degrading theme and celebrate the union of Emotional Xan and Pyrex Pirates on a track together. All four rappers fit together seamlessly here, and credit’s due to Forrest Slump of PxP for the complementary production efforts.

Parquet Courts – “Almost Had To Start A Fight / In And Out Of Patience”
RIYL: The Grey Album.
What else you should know: The former Dentonites who make up The Last Great New York Band are gearing up to release their fifth LP, Wide Awake!, on May 18 via Rough Trade. And if the band hasn’t somehow convinced you yet that it’s “made it,” then maybe this will: Wide Awake! was produced by Danger Mouse. Yeah, that Danger Mouse! In a press release promoting this lead single from that collection, frontman Andrew Savage had this to say of that surprise collaboration: “I personally liked the fact that I was writing a record that indebted to punk and funk, and Brian’s a pop producer who’s made some very polished records. I liked that it didn’t make sense.” It might be a little unfair to pigeonhole Danger Mouse as a pop producer considering that he’s worked with everyone from Gorillaz and The Rapture to ASAP Rocky and Norah Jones after making his name remixing Jay-Z and collaborating with CeeLo Green, but we suppose we get where Savage is coming from. More important, we like what we’re hearing. — PF

Red Shahan – “Someone Someday”
RIYL: Rubbernecking all the outlaws.
What else you should know: “Someone Someday” made its debut this week via Cowboys & Indians as this Fort Worth country crooner preps for the release of his sophomore album, Culberson County, that’s due out March 30. As that publication wrote, the track is a laid-back look at aspirations and insecurity with tongue-in-cheek lyrics, and it’s a loud commentary on the modern Texas-Americana scene. In other words: It’s smarter than what much of what Red Shahan’s contemporaries are releasing. — MG

Maceo Plex – “Polygon Plex”
RIYL: NASA-approved production levels.
What else you should know: It’s been a while since Maceo Plex called Dallas home after he jettisoned off to Spain and made a name for himself, but the electronic producer deserves our attention after releasing this unbelievably cinematic music video for “Polgyon Plex.” We’re not alone in feeling this way, either: Billboard, which premiered the video this week, called the clip “a dystopian sci-fi masterpiece.” As the publication reports, the video was directed by Joe Sill, who has worked with NASA, Tesla and Google Glass on projects in the past. So, y’know, we guess that explains that. — MG

Polystarra – Polystarra EP
RIYL: Nihilistic synthpop.
What else you should know: This eponymous release should be a surefire hit with fans of Tuxedomoon, DIIV or Chromatics thanks to the band’s clear post-punk influence. But the five tracks here are much more than derivative takes. The EP highlights the band’s affecting songwriting and emotive instrumentation on an elevated level that’s easy to get lost within. — MG

IBRA – Ugly
RIYL: Not having an alibi.
What else you should know: Ugly is an eight-track journey that’s completely deserving of your time. On it, newcomer IBRA pulls off vulnerable, introspective writing on sound beds that are so wide-ranging we’re having trouble believing it’s all coming from one artist. “Lazy and Stupid” is a strong intro track, for sure. But, for us, the real highlight of the release is “Flamenco.” — MG

Regal – “Full Metal Jacket”
RIYL: Kubrick-directed classics..
What else you should know: Regal’s low-key flow is all too similar to everyone else using this approach these days. But once you get 90 seconds into the track and realize he’s not going to break for a hook or a chorus, it’s fun to just try and keep up with the long-winded flow. Also, just to be frank, Regal gets a huge assist from a beat that is maybe the real champion here. If you’re more into visual aids, check out the video. — MG