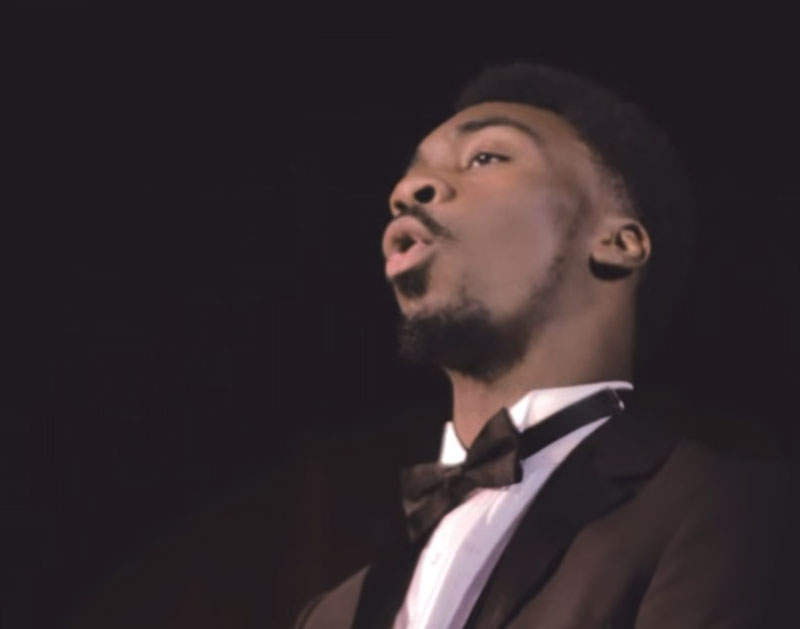 T.Y.E. — “Eterntiy”
RIYL: Being hip to something before everyone else.
What else you should know: We’ve been stanning for Dallas’ own T.Y.E. for a minute now, even going so far as to call the bipolar, opera-trained singer’s “La La Land” our favorite Dallas song of 2016. But, now with his debut LP fast approaching, it’s been a thrill to see others jump aboard the train. Following the release of his recent “No More” single, the rapper saw another cut from his upcoming 32 release (due out June 9 on POW Recordings) called “Eternity” get a video premiere from The Fader and then some additional love from Spin. We’ve been saying this for months now, but 2017 is looking like it’s going to be a breakout year for T.Y.E. And as long as he keeps dropping rhymes like this over beats this great, we’re only getting more and more confident in that stance.

Parker Twomey – “Sweater.”
RIYL: This Texas weather.
What else you should know: In this week’s White Noise, we teased the fact that 16-year-old Booker T. student Parker Twomey is releasing a debut LP later this month produced by ex-Centro-matic frontman Will Johnson and featuring all manner of veteran musicians. Today we get our first taste of that release through a video that’s been produced for the lead single. It shows Twomey recording in Austin’s Ramble Creek studio with a few of the old timers he’s impressed thus far. I imagine he’ll only keep on impressing more and more of his elders after the album comes out in a few weeks – a fact that’ll be celebrated with an in-store at Spinster Records on May 28.

Omicron, J Trauma — “Leave You Alone” and “Selah.”
RIYL: Being 15 forever.
What else you should know: The newest of new Dallas rock projects finds the tuneage of Brandon Brown fleshed out by The Jack Kerowax’s father-son rhythm section, drummer Nathan Adamson and teen bassist Nash Griggs, and laid down at their Ferralog recording studio. It’s really fun, upbeat stuff that manages to sound instantly catchy/recognizable and really different at the same time, given that it derives its basis from some brief overlap period of late ’80s new wave and early ’90s alternative. And, says Griggs, who mixed these two tracks, there are a bunch more on the way soon. Definitely something to be excited about.

The New Year – Snow.
RIYL: Refraining from calling it a comeback.
What else you should know: Bandcamp’s “Album of the Day” this past Wednesday went to The New Year’s first album in nearly a decade. It’s an outwardly simplistic record with unmistakably complex undertones. Whether you’re in it for the surface level chill vibes or the deeper dichotomies of the lyrics and arrangements that become more clear several listens in – or maybe you’re just a fan of Bedhead/every other Kadane brothers project in general? – you’ll find something compelling about this long awaited effort.

Plain Jane Francis — homebody.
RIYL: Steady grinding.
What else you should know: It’s been a month since his last release, so of course we’re long overdue for something new from the ever-prolific Plain Jane. He raps all about the process that keeps him so prolific on the second track of this new EP. He stays home, doesn’t go out. He’s already working on new shit before the last shit is even out. Are the rest of you taking notes?

Josh Weathers – “Before I Met You.”
RIYL: Getting back on the horse.
What else you should know: I guess Weathers is officially un-retired from music, eh? And that his serenading the Trumps at an inauguration day ball wasn’t just a one-off gig to help raise awareness for his anti-sex trafficking nonprofit? Nope, he’s, like, all the way back, it would appear, playing high-profile gigs like the recent Larry Joe Taylor festival, where he encapsulated the audience’s attention without even setting any of his instruments on fire. And now the buttery-voiced soul man has got an official new single out with more reportedly on the way. All. The. Way. Back.

Spike Chester – A Night Worth Forgetting.
RIYL: Fucking contradictions.
What else you should know: We’ve previously featured this album’s first single, “Catch a Fire,” which we now know to be by far the strongest track on the thing given that the full thing has been released. Throughout the remainder are several F-bomb-laden references to how religious he is. Which just feels a little… off.

Kacey Musgraves – “The Wurlitzer Prize.”
RIYL: Paying your respects.
What else you should know: Back in the summer of 2015, an all-star concert paid tribute to Waylon Jennings ACL Live At The The Moody Theater in Austin. It featured Willie Nelson, Kris Kristofferson, Toby Keith, Chris Stapleton, Jamey Johnson and lots of others. Kacey Musgraves was there, too, and we who weren’t there finally have some tangible proof of that now that a recorded version of the concert has been released. — CG

Pearl Earl – “Meet Your Maker.”
RIYL: The very Pearl Earl-ness of Pearl Earl.
What else you should know: Even though this one is a bit more ‘60s psych-leaning that PE’s previous efforts — a holdover from frontwoman Ariel Hartley’s dalliances with Acid Carousel, perhaps? — the band is in a place where everything it puts out is unmistakably them. They’ve certainly crafted an identifiable sound. And it’s cool to see that, even when they’re working in big fancy studios and with big fancy producers like Alex Bhore and Brack Cantrell at Elmwood Recording, this band still holds on to some of those initial lo-fi qualities that made us so quickly latch onto them in the very beginning.

Larce Blake — Why Can’t I Sleep.
RIYL: Burning the midnight oil.
What else you should know: Here, the young IRAS producer responsible for many of Devy Stonez’s immaculate beats is rolling solo with a four-song EP intended to show off what he’s capable of at the mixing desk when left to his own devices. With no rappers getting in the way – save for the track with the Big Tuck sample – it’s his production work getting all the shine here. And shine it does.

ArraDon – “Stacks N Bezels” (feat. Curtis Mayz).
RIYL: Horses of a different color.
What else you should know: ArraDon is the new stage name of Tunk, who is trying to turn over a new leaf with tracks like this one — not only with its laidback, jazzy, horn-filled groove, but with rhymes about things he should have done differently in the past. Says the Day and a Dream blog, “ New Revolution Swangin’ Musik from the artist formerly known as Tunk is on the way.” Looking forward to it.

Tyrannosorceress –“Haunting Black Infinity”
RIYL: Double, double Jurrassic-era trouble.
What else you should know: This week, Dallas metal act Tyrannosorceress proved itself more than just an act with a super cool name. Following a “Hey, a band with a name like this exists!” post on Decibel, it seems the editors over there decided to give the band’s new record, called Shattering Light’s Creation, a listen — only to realize that maybe they were too quick to just pass this band off as a well-named one. In turn, the magazine then debuted this track from the band, which is set to come as part of the new album that’s dropping on June 23 via Dallas’ own Tofu Carnage Records. Decibel calls the whole new disc “thoroughly impressive,” and after this first taste, we’re eager to see if we agree.

Cover image of TYE via his “Eternity” vido shot by Dance Dailey.
No more articles