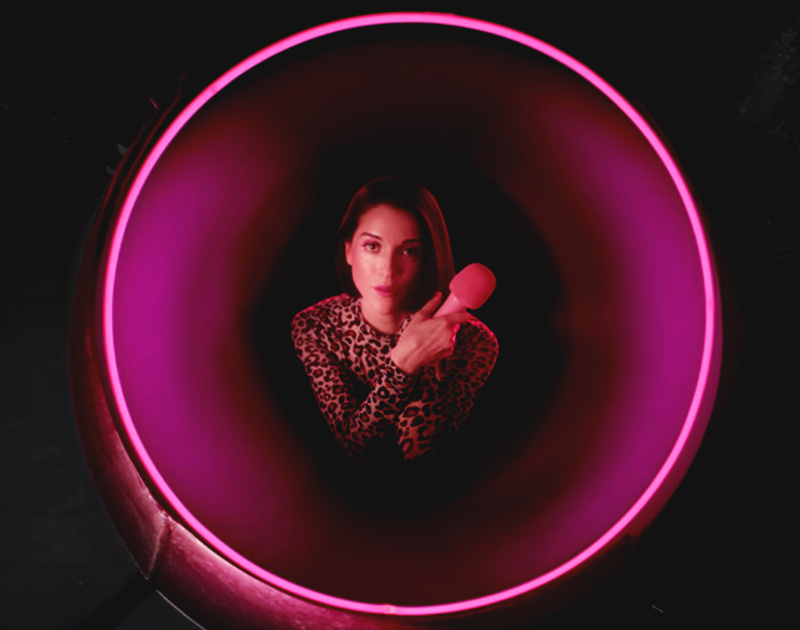 St. Vincent – “New York”
RIYL: Everything Annie Clark touches.
What Else You Should Know: The song’s been out for a few weeks now, but video for St. Vincent’s “New York” is such a visual delight, we couldn’t not share it. Here, the ode to the city Annie Clark is breaking up with is recreated with a wonderful pastel aesthetic directed by Alex Da Corte, who had this to say about Clark’s vision in a press release: “I think Annie’s New York is the New York of my dreams–one that is blurry and fractured, dreamy and flat. It is the Toontown to my Hollywood.” The single is generating tons of buzz around the artist’s upcoming album and fall tour, which unfortunately excludes Dallas.

Devy Stonez – “Up The Stats”
RIYL: Shooting Your Shot.
What Else You Should Know: In the video for “Up The Stats” — already one of our favorite hip-hop releases of the summer — Devy Stonez finds himself on the outside looking in while others make their play to be the winner. But once our guy finds himself in the game, he pulls up and shoots his shot — game winner. Whether it’s intentional or not, it’s a pretty great analogy for how we’ve seen Devy Stonez stepping into the forefront of Dallas’ hip-hop scene.

Toadies – “Mama Take Me Home”
RIYL: Rubberneck.
What Else You Should Know: A couple months back, Toadies guitarist Clark Vogeler discussed in a statement how his band’s new album came to be: “When we got to the studio with nothing more than a pile of riffs, what came out of the band was really loud and heavy music. So not only is this album louder than 2015’s Heretics, I think it’s louder and heavier than the last couple Toadies albums.” In all, the band’s seventh album, called The Lower Side of Uptown, and due out September 8 but streaming in full here right now, definitely seems like a callback to the band’s seminal Rubberneck album, and that has us excited.

Blindwish – Good Excuses
RIYL: Early 2000s Post-Hardcore.
What Else You Should Know: At some point around 2008 or 2009, post-hardcore music started getting out of hand. Bands became consumed with their image, dramatic breakdowns, screaming vocals and electronic elements that grew repetitive and uninspired. Since then, the genre’s felt like a sea of clones but Blindwish’s debut feels like a breath of fresh air. The album is out now but you can listen to a stream of the album via Rise Records and you’ll happily hear influences from seminal post-hardcore bands like The Used, Thrice and Saosin.

Sad Cops – “It’s Eating At Me”
RIYL: Showering with your guitar.
What Else You Should Know: For a band that makes music rife with angsty emo lyrics and rudimentary instrumentation, Sad Cops’ music is oddly refined. It’s minimalism at its best and Grayson Harris’ vocals and songwriting come across as earnest and impactful. That sentiment is even easier to digest when you see the band in action like in this new, charming clip for “It’s Eating At Me” — the band’s first-ever video! — from its wonderful 2016 album, Liam Murphy Holt.

Wa$tee – “Juvy”
RIYL: Taking a head shot with your only chance.
What Else You Should Know: The best thing about “Juvy” is that the beginning of the song sounds like it’s actually starting midway though and forces you to catch up — not an easy task because the song has so much energy — but once you get your bearings it’s definitely a fun listen.

Dizzie The Wizard – Cosmic Phenomena
RIYL: Connecting with the elements of the universe.
What Else You Should Know: Dizzie The Wizard’s latest EP is an aggressive, self-affirming journey of a listening experience. No pun intended, but the music can indeed be dizzying at times. It’s energetic, intriguing and The Wizard, turns out, is a better rapper than we knew. This is an outlier of an EP from what we’re used to — and we love it for that.

12 Gage – “Time”
RIYL: Shining before you hit your prime.
What Else You Should Know: About a month back now, 12 Gage earned his spot on our when he released “Indecisive” and demanded out attention. Now he’s back with a new track that may cement his place as a fixture within the city’s deep roster of hip-hop talent.

KerryTheAce – “don’t mean it”
RIYL: Feeling important and balling like Jordan.
What Else You Should Know: It’s just so easy to listen to this song and bounce your head along to it! It’s weird: KerryTheAce pretty much maintains the same cadence through the whole track and the beat doesn’t have any progressions to it. I guess you just kinda get lost in the zone the track creates.

Garret Owen – “Rose Hill”
RIYL: Up and The Notebook
What Else You Should Know: Owen’s melancholic “Rose Hill” is a slow-burning track that’s just as captivating a listen as its cinematic video is to watch. As we mentioned in our White Noise column earlier in the week, Owen has a show tonight opening for Charlie Sexton at the Kessler Theater that’s worth your time.

freyjalune – “divination :: ritual”
RIYL: Weightlessness.
What Else You Should Know: As our pals up at The Dentonite wrote about this work earlier in the week, this isn’t so much an album as “a musical journey verging on a spiritual experience.” And, after an odd and stressful week, it’s maybe just what the doctor ordered.