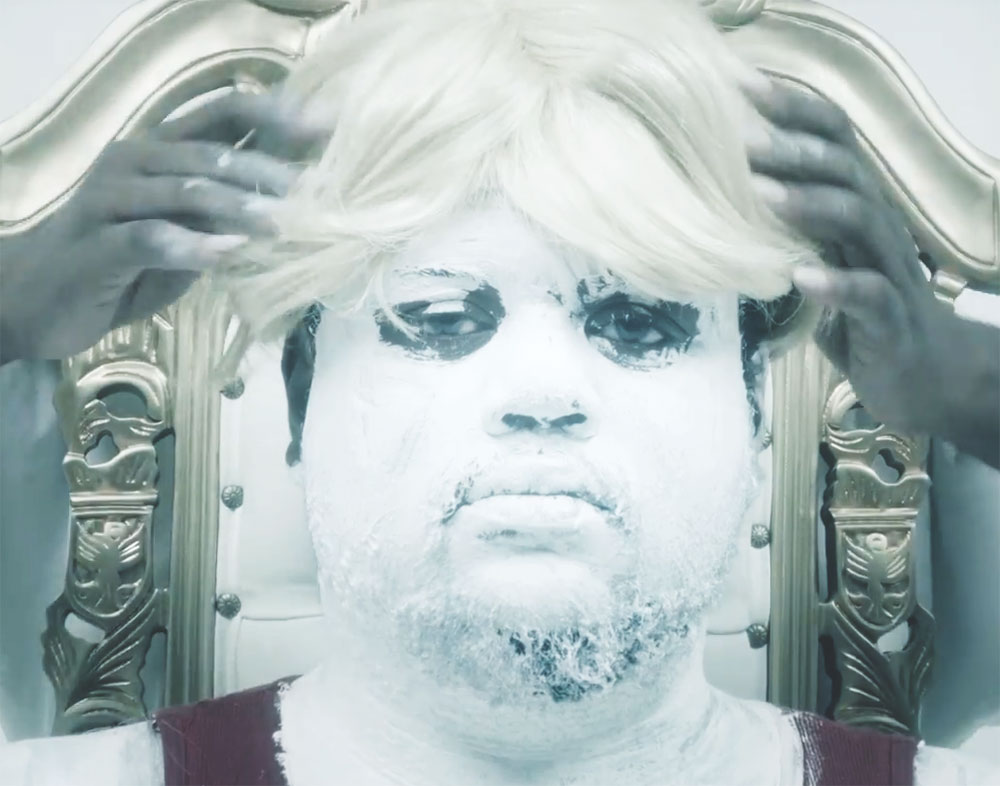 Jon Theory – #FFFFFF
RIYL: Finally figuring out how to express yourself.
What else you should know: Jon Theory’s absolutely wonderful and introspective “#FFFFFF” tune is from his aptly titled new project, Lost Pages From His Journal. The song feels incredibly personal as Theory speaks on his experiences as an outlying black youth — and, specifically, finding joy in experiences erroneously regarded as “white” activities while still having to confront the prejudice minorities regularly face. The song on its own is affecting, but the self-directed video heightens the tension as the artist is painted white by others around him. In a Facebook post accompanying the video, Theory explained his inspiration: “All I ever wanted to be in life was a voice for those who didn’t know quite how to express their feelings.” Check out the rest of the project here.

EB Rebel – “Club 27”
RIYL: Seeing 28.
What else you should know: EB Rebel tackles the lures of fame and success on “Club 27,” which is a direct reference to the 27 Club — a list of popular artists who died at that age, among them Jimi Hendrix, Janis Joplin, Kurt Cobain, Amy Winehouse and more. The somber tune’s production comes from Dallas producer Ish D and the sharp visuals come from celebrated artist Jeremy Biggers. But even in that company, Rebel’s confident delivery and affecting storytelling are the greatest feat.

Pedigo’s Magic Pilsner – “Orion”
RIYL: Triumphant debuts.
What else you should know: Pedigo’s Magic Pilsner’s debut album is on its way with a release date of March 2, 2018. And, so far, we like what we hear. But, perhaps more important, Old 97’s frontman Rhett Miller is also on board. Here’s his take: “John Pedigo has crafted a beautiful set of songs with his new Pedigo’s Magic Pilsner. Accompanied by lush arrangements, John’s voice delivers stories that display the sense of humor that’s always defined him, only now the stories come with a newfound depth. Pedigo’s Magic Pilsner is a triumph. Drink up, y’all.” That’s high praise right there, not that this should be surprising to anyone familiar with Pedigos earlier work in The O’s and other popular area outfits hes fronted over the years.

Nawfside Kognak – “Grindin”
RIYL: Falling in love with prescriptions.
What else you should know: Nawfside Kognak has no interest in frills, and that’s probably his greatest quality. Just as he did on “Re Rock,” he keeps “Grindin” simple with a moody trap beat and delivers a verse straight off the cuff with an air of authenticity that few can match.

Mitchell Ferguson – “Go, Kid, Go”
RIYL: That final fight scene from The Protector.
What else you should know: “Go, Kid, Go” is a fine tune. It’s OK, kind of a fun listen. The real treat here, though, is its accompanying Cinderblock Sessions-helmed video, which is one continuous, uninterrupted scene shot in Deep Ellum traffic. The tough-to-turn-away-from clip is very well done.

Crit Morris – “Finally”
RIYL: Finally being on your shit.
What else you should know: Never underestimate the effectiveness of some well-placed Autotune. On the fun and humorous “Finally,” its employment gives the whole song a catchy hook feel, while Morris maintains a melodic tone to his delivery throughout.

Coach Tev – “Didn’t Know We Had An Issue”
RIYL: When your girl makes you self-conscious about you wife.
What else you should know: At this point we shouldn’t be surprised, but it’s still astounding how tactful Coach Tev is with his music and how hyper-aware he is of his direction. On “Didn’t Know We Had An Issue,” Tev addresses those times in life when someone you’re totally unaware of has a problem with you. But as a wise man once said, “If you have haters, you must be doing something right.” That in mind, he addresses the unnamed culprit with his signature wit and low-key delivery — but, over the course of the track, the artist eventually picks up steam and really starts to bark back. That’s an energy we don’t often see from the tempered Coach, and we dig it.

Kaz Moon – “dba.1986”
RIYL: Quick turnarounds.
What else you should know: Less than two months ago, we were pretty stoked on Kaz Moon’s Anomie release. The writing was sharp, the music was smooth and enticing — and it had us wondering what to expect next from the artist. Enter “dba. 1986,” in which this newcomer already sounds more developed. The vocals are stronger and more lively than anything we heard on the previous release. We really like where this artist is headed.

Whep – Whep
RIYL: Playing things fast and loose.
What else you should know: If you’re looking for nine minutes of pure garage-punk energy, look no farther than Whep’s five-track, self-titled affair. In less time than it takes to cook a frozen pizza in the oven, Whep spits out five blistering tracks. Hit play and strap in.