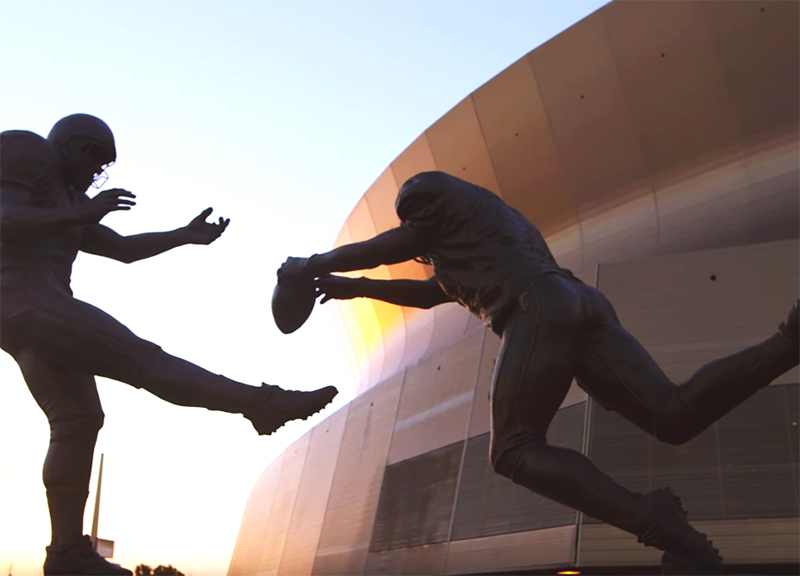 Gleason Is Refreshingly Unsentimental About Disease.

One blocked punt doesn’t mean much in a typical game of football. But when Steve Gleason blocked a punt in the New Orleans Saints’ first home game after Hurricane Katrina, he became a local hero. Now, in the new documentary Gleason, he becomes an international one.

Diagnosed in 2011 with ALS (Lou Gehrig’s Disease) — a neurological disorder that is almost always fatal — Gleason used his considerable influence to make an impact on those affected by the disease, even as his work with his charity Team Gleason took a massive toll on his wife and young son.

Thankfully, Gleason doesn’t shy away from this.

Directed with the same eye for both humor and humanity that he brought to Finders Keepers, Clay Tweel assembles the video diaries Steve shot for his son to watch along with harrowing conversations Steve holds with his family and friends as he tries to be on good terms with everyone before he goes.

It’s refreshingly unsentimental, but there is plenty of conflict. To me, the crux of the film is Steve’s contentious relationship with his dad Mike, who constantly makes excuses for his less-than-stellar job in raising him. They also have strong opinions on faith, with his dad following a more fundamentalist Christian path, and Steve following a more basic be-good-to-each-other philosophy. I wish the film had explored this dynamic more; there’s real drama there.

But there’s comedy, too. Both Steve and Gleason recognize that sometimes you just have to laugh, like when Steve has literally lost control of his bowels and has to call a nurse to loosen his stool: “Am I the most attractive guy you’ve ass-fingered?” he asks with a gleam in his eye.

Steve obviously has a strong support system (and considerable resources too, which is not as big an issue since he fought for Congress to include mandatory coverage of speech devices under Medicare and Medicaid), including his ferociously strong wife, Michel. But curiously absent are any of his Saints teammates or coaches besides linebacker Scott Fujita. They’re at the stadium for events he’s part of — including a stadium dedication — but there’s not a single shot of them visiting him at home or the hospital. Curious, that.

Still, Gleason is a moving portrait of a remarkable fighter. Bring the tissues.