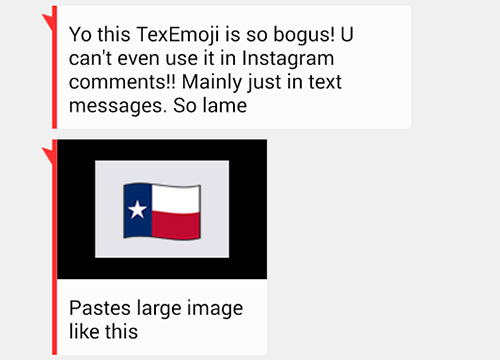 Our Taco Emoji Dreams Have Been Crushed: The TexMoji App Is A Huge Disappointment.

After years of awaiting its arrival, followed by months of a promised coming-soon tease, the taco emoji — along with a variety of other Texas-related icons — finally made its debut today as the highly anticipated TexMoji app officially went on sale in the iTunes store for $1.99.

How cool is that? We can all now include new emojis reflecting our Texas pride in or Instagram and Facebook posts! Awesome, right?

Turns out, the new app is kind of a bust. For one thing, you won't be able to post these emoji within most social media apps. That's because TexMoji, we're sorry to report, isn't compatible with unicode emojis. In layman's terms: It doesn't show up within the characters of your standard text keyboard; instead, the app exists as its own standalone “keyboard,” from which users can select images that will then be copied and pasted into a text conversation, kinda like how the Bitmoji app works. What this means is that you can't use these icons in Facebook or Instagram comments, just in text conversations where they exist as glorified clip art image attachments.

Granted, the app makes no bones about this in its description, acknowledging that it instead uses “uses high-quality and high-resolution emoticons that have been rendered to fit an iMessage bubble to show your Texas pride while you text!” And emoticons are no emojis, as we all know. But, whatever, that doesn't make it any less of a disappointment.

It's no wonder, then, that negative reviews are already clogging up the app's iTunes reviews.

Our recommendation? That you save your $1.99 for a real taco, folks. This one sucks.