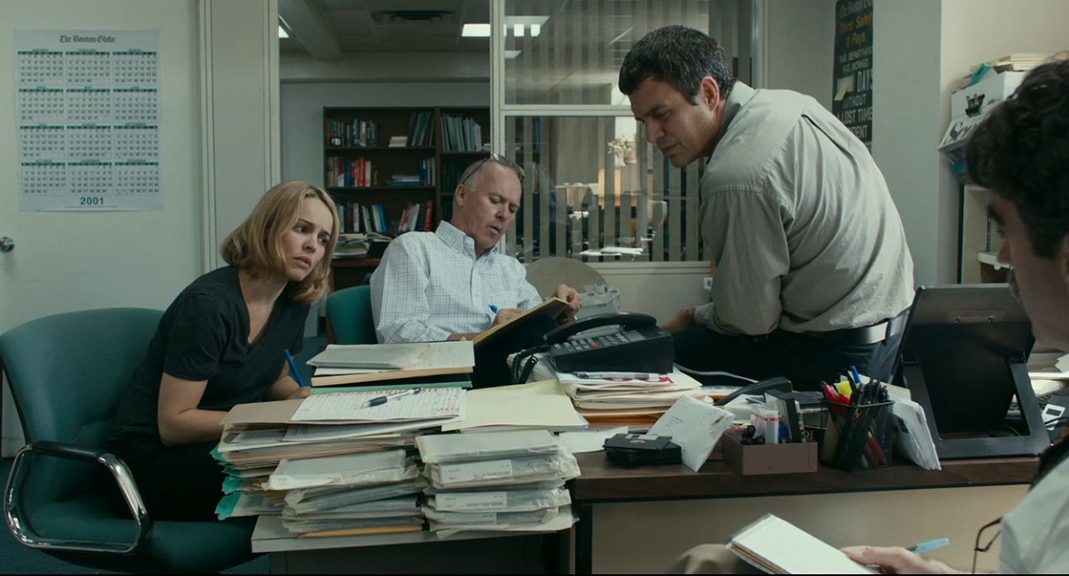 In 2003, The Boston Globe won the Pulitzer Prize for Public Service Reporting thanks to its series of exposés on the Catholic Church's systemic cover-up of abusive priests. As it was then, it remains shocking that such horrors were inflicted on children — and then allowed to continue happening for so long.

But Spotlight is at least partly inspiring, mostly because it focuses on the journalists that refused to let the story stay buried.

Here, Michael Keaton plays Robbie Robinson, the editor of the “Spotlight” team. He and three savvy reporters — Mike (Mark Ruffalo), Sasha (Rachel McAdams) and Matt (Brian D’Arcy James) — were all raised Catholic, and they’re a little uncertain about the new Jewish editor from Miami (a terrific but understated Liev Schreiber) who wants them to start digging deeper into a story about a priest convicted of molesting dozens of kids.

Throughout their reporting, these journalists encounter countless of people who simply don't want to talk about the story, either out of fear or some misguided respect for the institution. Actually, the movie sometimes feels redundant in that regard: A reporter will hear a heartbreaking story from a victim, then get an angry response from someone who works for the church, and back and forth we go.

But like All the President's Men before it, this is a film about doggedness winning out and determined journalists doing whatever they can to get the truth out. The Globe's “Spotlight” team may be unorthodox, but they're never unethical in their pursuit of justice.

The whole cast used to tell this tale is great — and even those in smaller roles. The actors playing the victims of abuse typically only get a scene apiece in Spotlight, but they're an extremely effective lot at describing their seductions by these priests and detailing the shame they felt in keeping their traumatic experiences secret for so long.

Each actor of the newspaper staff is similarly note-perfect. Keaton does the heavy lifting, sparring with the good ol' boys he went to Catholic school with who are now complicit in the cover-up. James is exceptional as the only remaining semi-religious team member and the only one with kids; he feels more like a real person than the rest of the cast. McAdams and Ruffalo are terrific as usual, but their characters have slight issues. McAdams' Sasha is too underwritten. The whole team is married, but hers is the only spouse we see — too bad that doesn't really add anything extra to her mix. Mike, on the other hand, is overwritten, and Ruffalo, rocking his signature bad haircut and mouthful of Milk Duds, feels about ten years too old to play this part, even if he plays it great.

As or the Catholic Church, Spotlight mostly represents it as a monolith of evil — and, for this movie, that's OK because this is not a film about the church. Still, Spotlight saves some indictment for journalists, too. After all, it's not as if 2001 was the first time any newspaper had ever reported on these crimes, and a powerful reveal in the last act makes one of the saintliest reporters suddenly come off as a little more human.

Also helping things is the fact that Spotlight is perfectly paced and structured like a thriller. In other words: Scenes we've seen in a hundred other movies – searching through old records in a dusty basement, running to a courthouse before it closes, going door-to-door to ask questions – feel fresh and exciting in this setting.

Like the original articles this team produced, its story is one that needs be told. In Spotlight, that story is told very well.

And that's the best any journalist or subject can ask for.