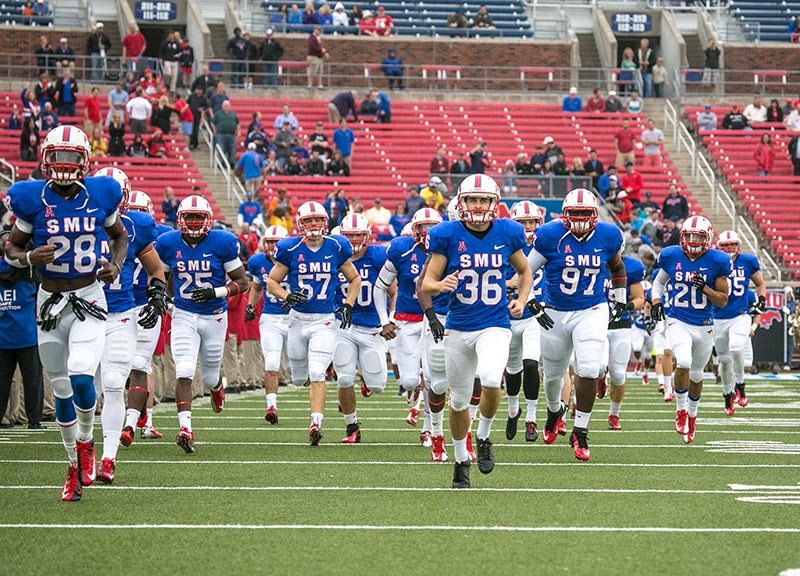 Scenes From SMU's Triple-Overtime Thriller Against Rutgers on Saturday.

Early in the second quarter against Rutgers University at Gerald J. Ford Stadium on Saturday afternoon, that fate seemed all but certain as the Mustangs trailed the Scarlet Knights 21-0. But then something rather encouraging took place: SMU battened down the hatches and stood its ground, showing off a resiliency that the team hasn't yet shown in this season. In the second half, the team found its footing, forcing Rutgers into a thrilling triple-overtime shootout that eventually ended in a 55-52 loss but could easily be counted as a moral victory for the home team.

It had been a rough start to the football season for the Mustangs heading into this game. Prior to squaring off against Rutgers, the team had lost three of its first four games. Granted, its schedule hasn't exactly been an easy one; the team's three losses were to state rivals Texas Tech University, Texas A&M University and Texas Christian University — teams currently enjoying the kinda of success that SMU so enjoyed in the pre-death penalty '80s.

Saturday's game appeared to initially be following this same script. Though the first two quarters, senior quarterback Garrett Gilbert was pressured on nearly each pass he attempted and sacked three times. A botched snap in the first quarter further added to the seeming futility, as Rutgers recovered the ensuing fumble in the SMU endzone for a touchdown. The Mustangs' stagnant offense wasn't helped much by punter Mike Loftus, either; after punts of 25 and 13 yards, he eventually found himself replaced by placekicker Chase Hover.

Perhaps the lone bright spot of the first half of play for the Mustangs was Gilbert's 21-yard second-quarter touchdown pass to Jeremy Johnson, who made a spectacular off-balance grab and trotted into the endzone by himself and perhaps set the tone for his team's second-half offensive spark in the progress.

In that second half, the Mustangs' momentum continued to grow, starting with its defense forcing a Rutgers punt on the opening drive of the half and the offense subsequently scoring on a quick 55-yard touchdown pass to Keenan Holman.

From there, it was the Gilbert and Johnson show — Gilbert would set SMU football records in this game in pass attempts (70), completions (45) and passing yards (484); Johnson, who scored three touchdowns on the day, would set a school record with 217 receiving yards — as the team scored 21 unanswered points in the fourth quarter to force overtime.

It was dramatic, for sure. Following two touchdown passes from Gilbert to Johnson and Darius Joseph, respectively, Rutgers' lead was trimmed within one score at 35-27, Gilbert once again connected with Johnson on a short out route that turned into a 43-yard gain and put the Mustangs in scoring position with two minutes left in the game.

Two plays later, the Gilbert and Johnson connected again on another out route that the receiver turned into a big gain, this time by juking one defender, breaking a tackle and lunging for the goal line with 6-foot-4-inch Rutgers defensive end Darius Hamilton wrapped around his ankles.

Then, still down two points and with just over two minutes remaining in the game, the play of the game took place. After SMU head coach June Jones' coaching staff opted for a two-point conversion in an attempt to tie the game and potentially force an overtime, Gilbert lined up in a shotgun formation with a four receiver set, looking for another quick throw.

But, with his receivers well covered and three Rutgers defenders collapsing his pocket, Gilbert was forced to improvise: He spun out of trouble, scrambling to his right, along the sideline, looking for a receiver; just before stumbling out of bounds, though Gilbert heaved a pass to the opposite side of the field, where he connected with a wide open Johnson, who caught the ball, stretched out on his barely in-bounds tiptoes, while falling to the ground.

It was a remarkable play.

And the team's offensive good fortune would continue in that play's wake, with Rutgers and SMU each trading scores to kick off overtime play.

In the third overtime period, however, Rutgers forced SMU to settle for a field goal. And though Rutgers' offense had grown stale throughout much of the game's second half, freshman running back Justin Goodwin was able to prove himself a workhorse regardless. By the third OT, Goodwin had already accounted for 192 yards of total offense and two touchdowns when Rutgers put the ball in his hands twice more.

First, Goodwin rattled off a 13-yard run. Then he broke loose along the sideline on a counter play, shaking off two Mustangs in the backfield and juking past two more defenders before cutting back inside, spinning through an ankle tackle and falling over an SMU defensive back with the ball outstretched over the goal line to score the game-winning touchdown.

It took four and a half hours to get to that point, though. And, given that, sure, it was a tough loss for the Mustangs, who fell to 1-4 on the year and opened conference play with a loss.

Still, the game showed the potential that the Mustangs have flashed under June Jones. And conference play continues on October 19, when SMU visits Memphis. 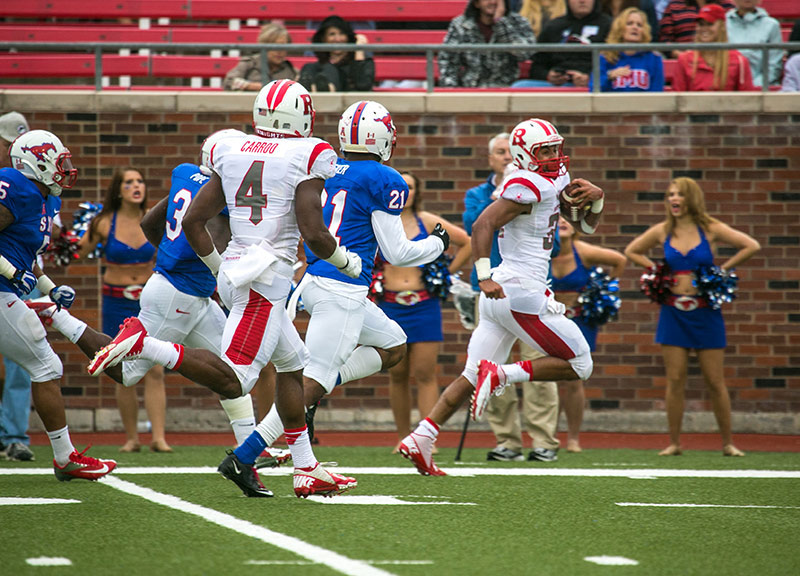 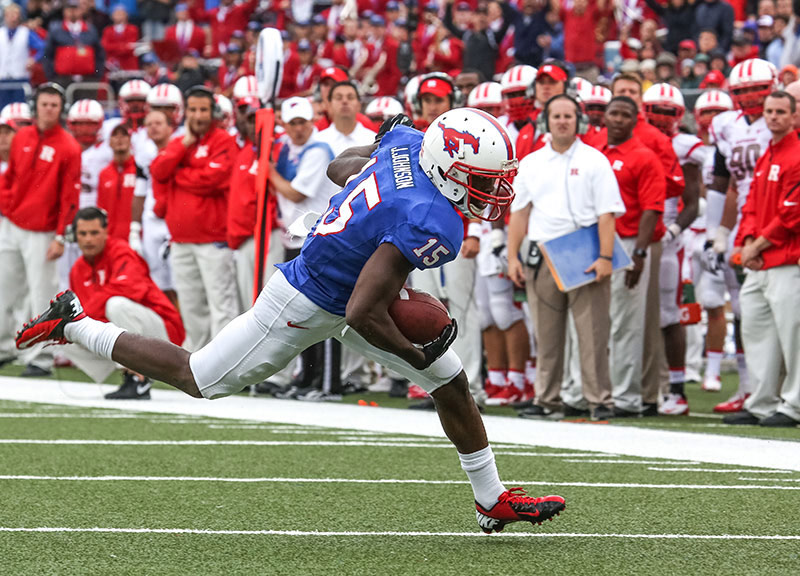 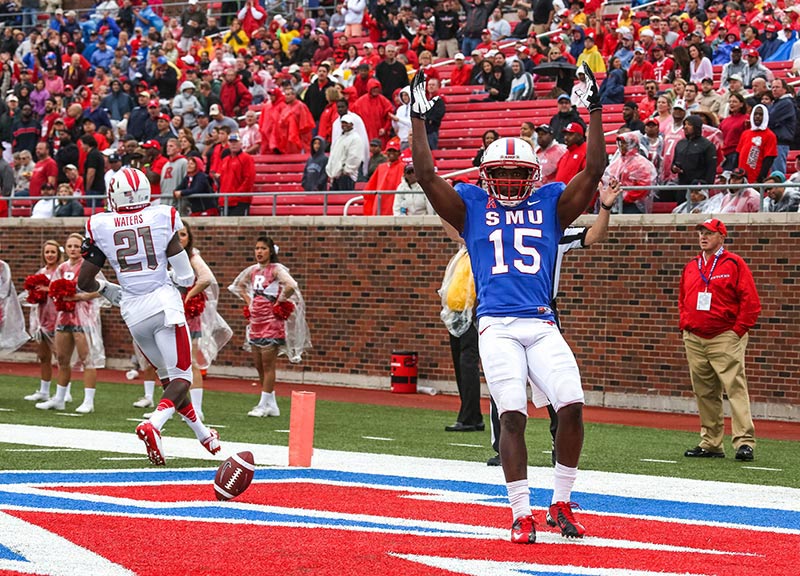 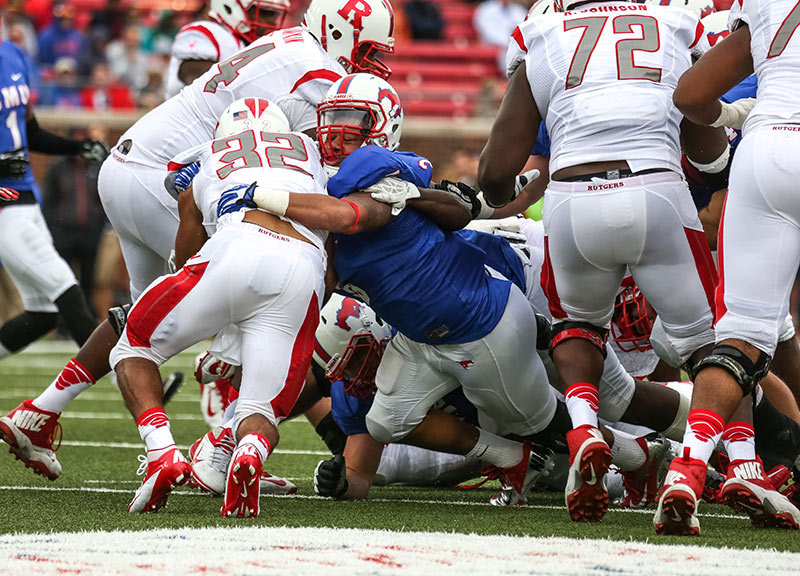 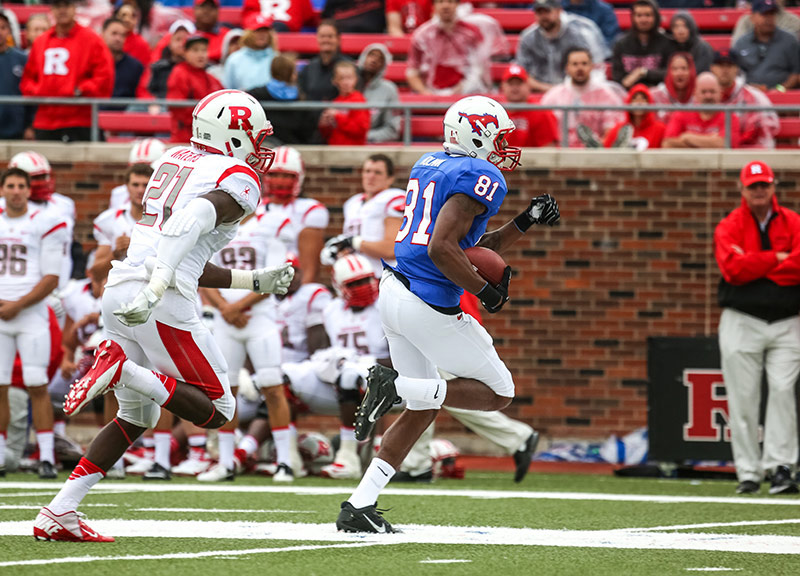 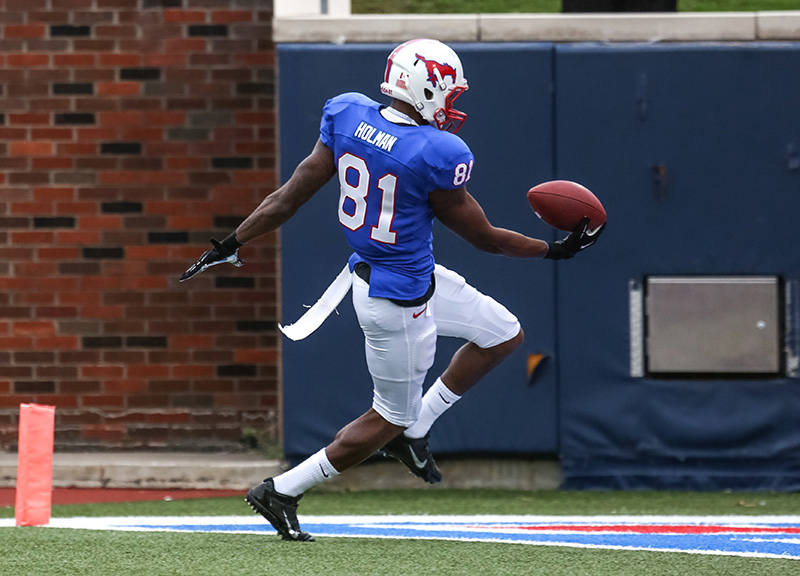 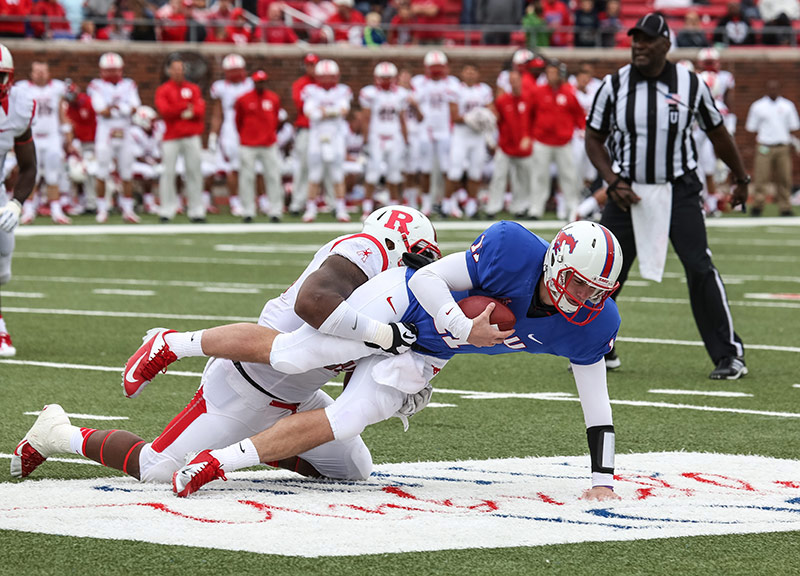 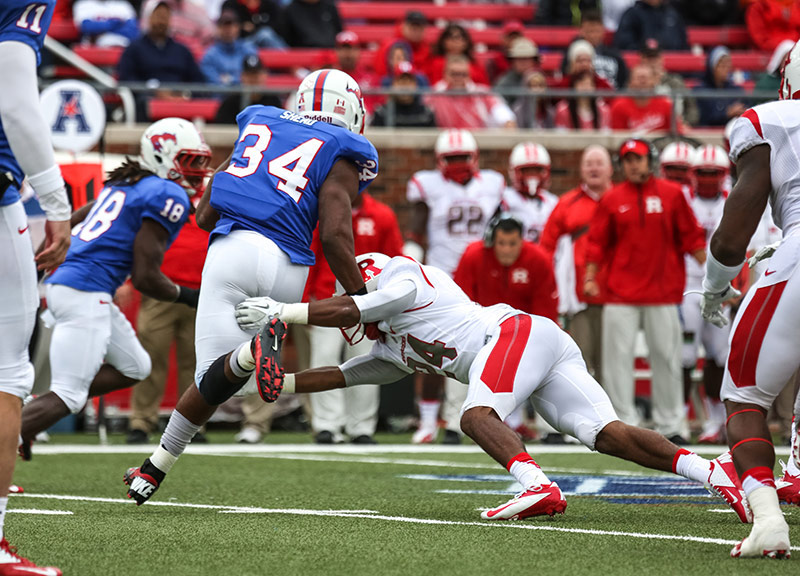 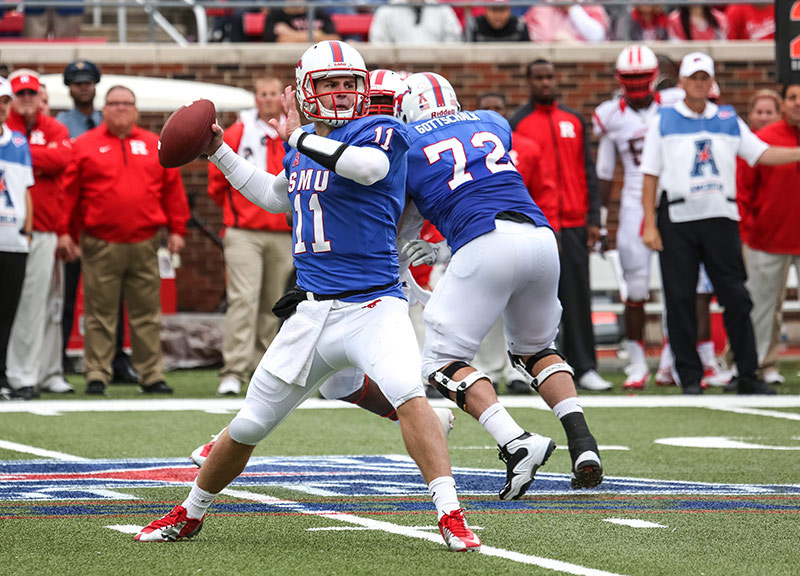 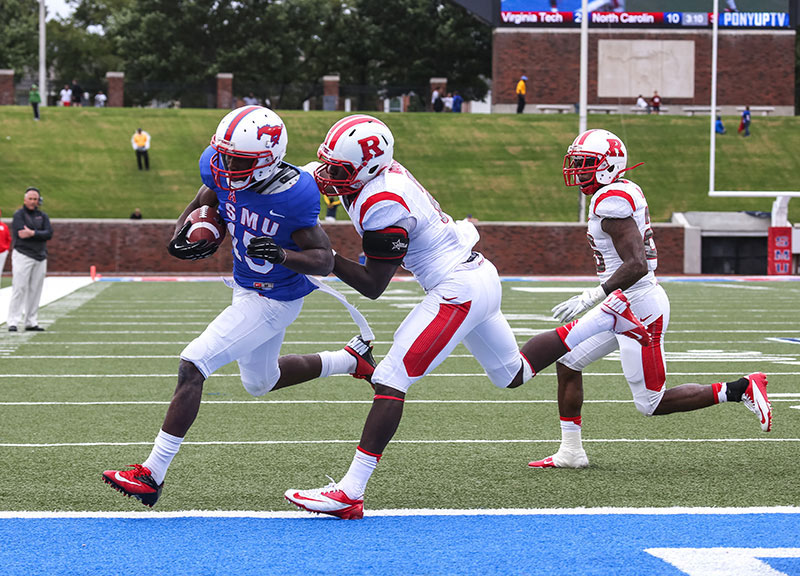 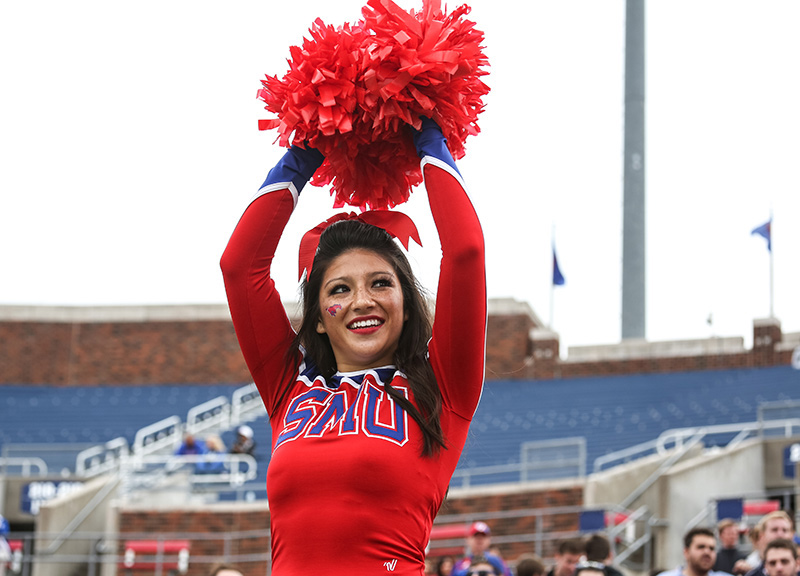 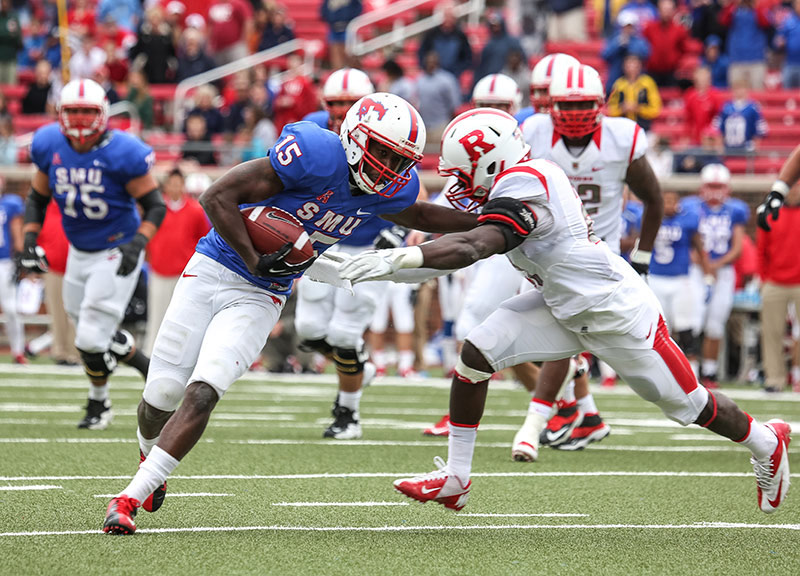 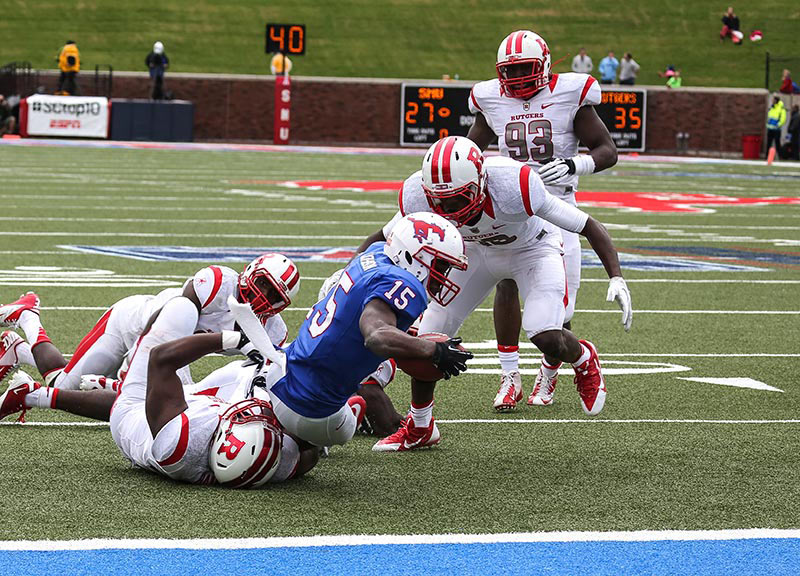 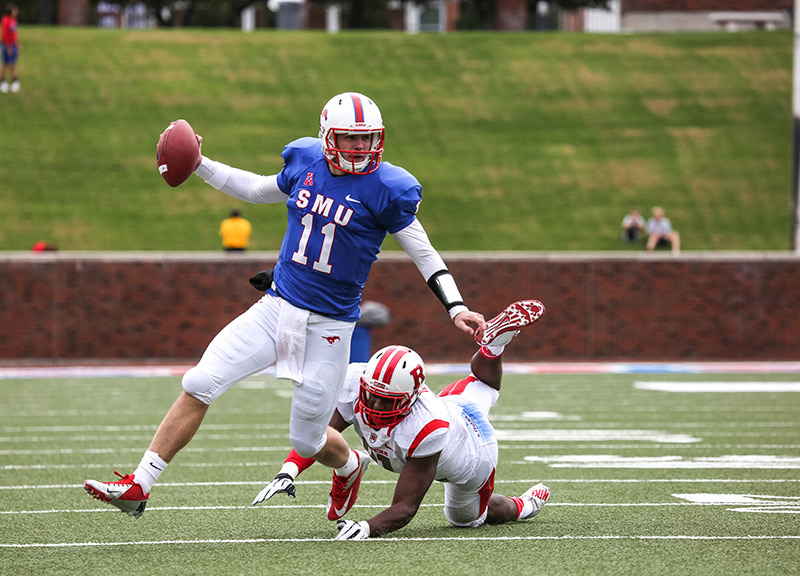 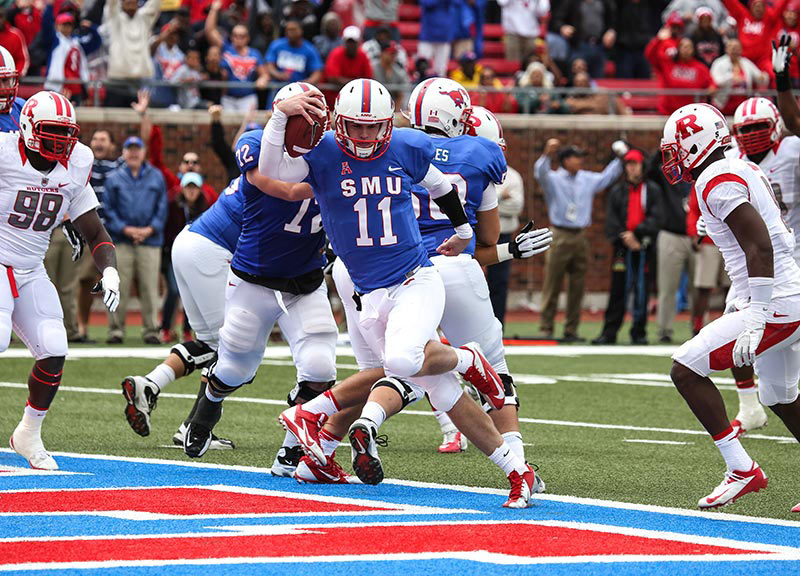 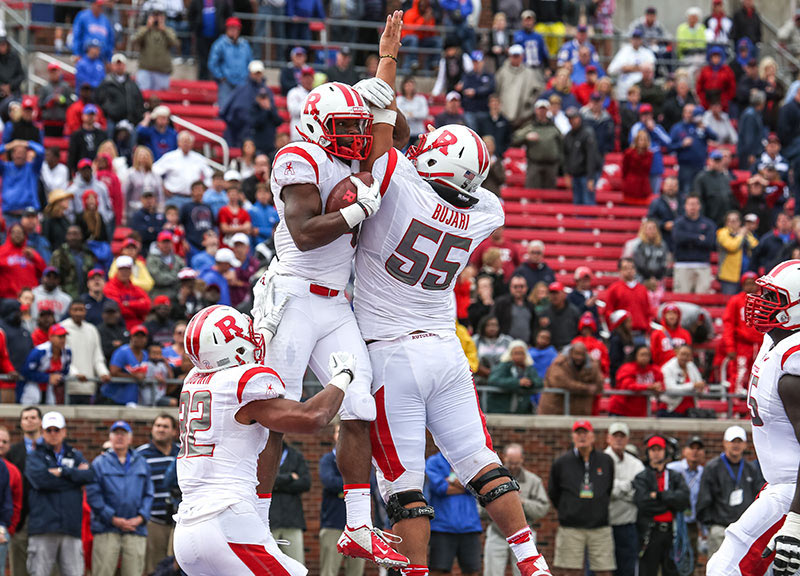 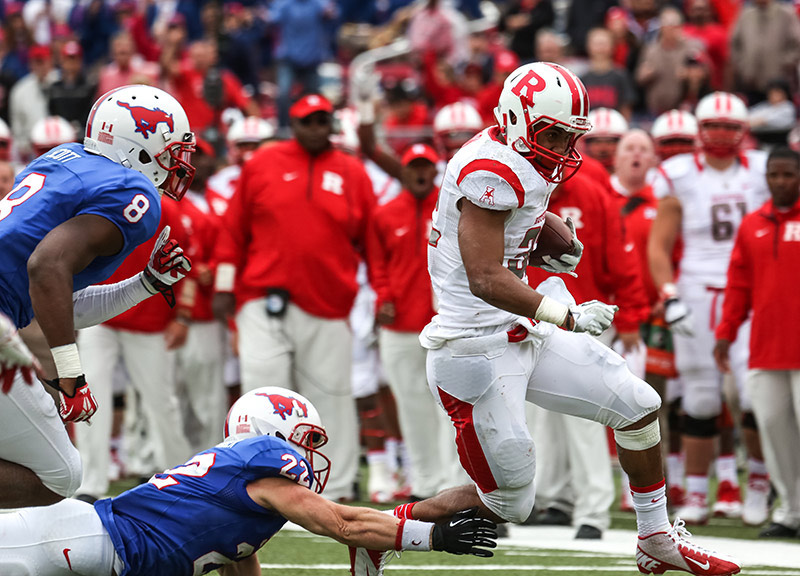 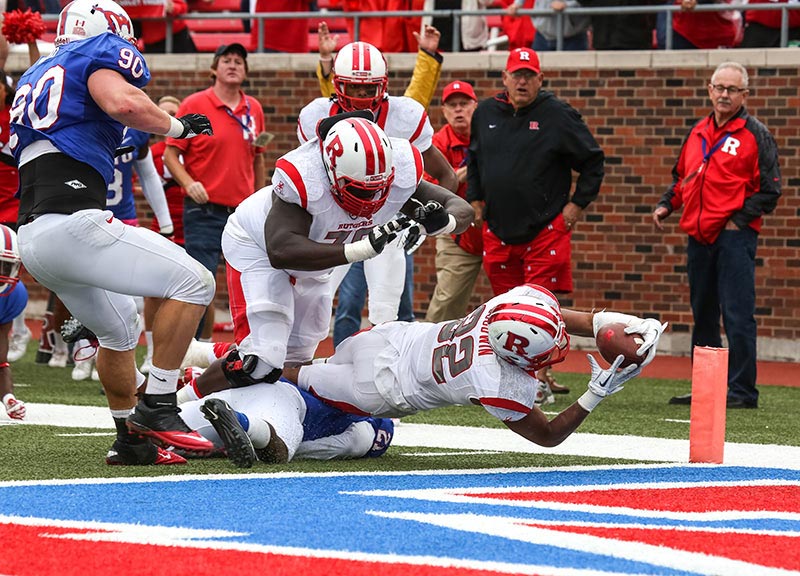