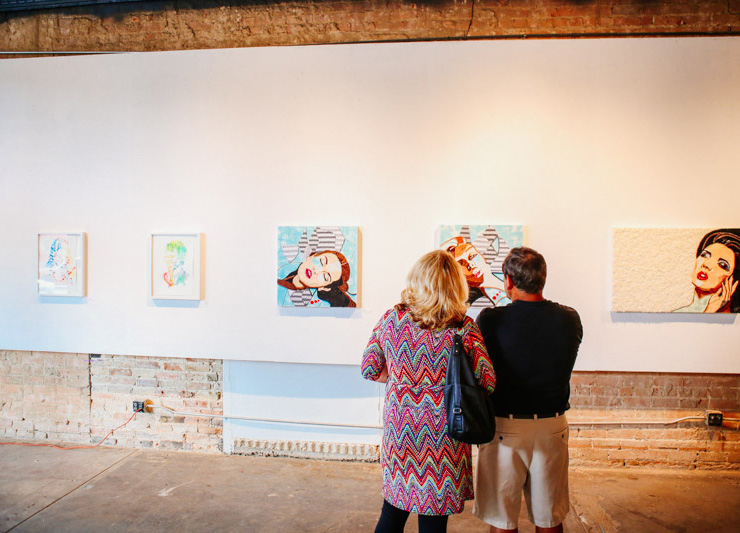 Gallery walks as large as the one that took place in Deep Ellum this past Saturday are, by nature, fairly cumbersome affairs. With 17 galleries participating — as was the case with this particular Deep Ellum Community Association- and Dallas Art Dealers Association-sponsored walk — it becomes a matter of time-budgeting and choosing which galleries are, unfortunately, to be skipped over — and, worse, having to do so with very little knowledge of what each gallery actually has on display.

My point is this: If planned poorly, the experience can contradict what visiting a gallery is actually about.

Or is it? Obvious time consumption issues aside, trying to see 17 galleries worth of art sounded kinda awesome to me.

So, just this once, in lieu of approaching the Deep Ellum Spring Gallery Walk as one perhaps should — that is to say, giving each gallery plenty of viewing time so that one can fully appreciate the art on display — I decided to make it less about absorbing all the fantastic art and more about pushing the limits of just how fast I could see 17 galleries worth of art.

It was… well, it was an experience. One I'd recommend? Well, here's how it went down.

6:20 p.m. I arrive in Deep Ellum and park across from Murray Street Coffee because paying for parking is dumb. Also, I immediately enter panic mode, having just realized I have only 1 hour and 40 minutes to see 17 galleries because this thing ends at 8. Fuck me.

6:30 p.m. I arrive at the starting point of my sprint, Kettle Art. On display inside was a show titled “Patterns of Passion,” featuring the portrait-driven art of Corey Godfrey and Aralyn McGregor, plus the design-heavy paintings of Judith Lea.

6:37 p.m. After a brief walk up Main, I enter the somewhat hidden space of Steve Paul Productions for the “Art + Technology: Experimental Works by illustrator Steve Deitz” show. The pieces on display made heavy use of bold, high-contrast colors and deep, sculpted textures, which also made use of the new Oculus Rift technology to create an even more in-depth experience.

6:50 p.m. I arrive at the shared Liliana Bloch and The Public Trust space. And, half an hour into my venture, it's already been foiled. I was forced to skip over Barry Whistler Gallery because, well, it wasn't open. Also, there was some sort of sporty-looking chick wearing her yoga clothes having a photo shoot out front of the gallery. Maybe it was a performance piece about the male expectations put upon women? No, probably not. Anyway. Inside The Public Trust and Liliana Bloch, several series of photos were on display. The one that dominates most of the space featured the photography of Matthew Mahon. Besides the photographs being visually stunning, the subject of the body of work is enthralling: Mahon went out and found female prostitutes and paid the fee for their time, but, rather than do the thing that people normally do with prostitutes, he shot portraits of them.

6:56 p.m. I enter the clean and modern space of Kirk Hopper Fine Art with sweat gathering around my temples and lower back. I've suddenly come to the realization that I will never get to enjoy proper patio weather, as the one week of sub-80 degree weather has passed and I was too busy to notice it. I get sad. And I'm starting to tire, which isn't helping. Also, to worsen my impending tiredness, Eduardo Partillo's whale-like creation lying in the center of the room is basically a giant pillow in my mind, and I can't stop thinking about that.

7:02 p.m. Because I’m not totally insane, I walk back to Kettle instead of walking all the way to the participating Exposition Park galleries. A short-distance taxi service called E-Frogs has been shuttling art walkers all around the area, so I hop in an empty six-seater golf cart and let the driver take me to 500x. It's basically like Uber, but without the compulsory wallet-grabbing and extraneous amenities. They operate entirely off tips, so you're not taking out a loan for having someone drive your drunk ass around. Win-win, right?

7:10 p.m. I might not be walking any longer, but this is still a sprint, and I sense that walking into 500x. Or maybe I'm just startled by the pieces on display in the space, which ranged from colorful, texture-heavy creations to sculptures of severed feet on bloody pillows. I leave confused and somewhat uncomfortable.

7:18 p.m. I enter CentralTrak: The University of Texas Artist Residency and Gallery, take some photos, head out earlier than I would've like as time has become more and more precious, and there are still plenty of galleries left to see.

7:27 p.m. Beefhaus, a newer gallery in Expo Park, presents one of the more unrefined, yet dirtily enticing spaces of the participating spots. The linoleum floor has cracks and is just completely missing in parts. The rooms themselves, meanwhile, are tiny and suffocating. Yet, with this small space, the work has a much more in-your-face appeal. The work that first greets me — a throwing up a video of two people sitting in a cramped room — only adds to this effect. Around the corner and into the next room, I'm greeted by a couple that's meditating together. Turns out the projection was a live feed.

7:38 p.m. Cohn Drennan Contemporary, one of the newest spaces in Expo Park, uses a small loft space on Commerce to create an open yet intimate gallery. On display are pop art paintings of meat by Chisum Justus. The way in which the pieces are displayed feels more like a house show than a formal gallery, which, when hopping between more than a dozen galleries, isn't a bad thing. In this case, it helps the space stand out in my memory.

7:45 p.m. After the smallish spaces of my previous few gallery stops, the massive, multilevel space of the historic Dallas Power and Light Building on Commerce, known formally as The Power Station, is daunting — and even more so because much of the space is vacant. You have to walk up three levels before you get a room displaying a handful of new media pieces. Though the work is generally uninspired, the space is definitely one of the best in the area, and that helps make up for it.

7:50 p.m. After hopping back into an E-Frog, I realize that I have come to the point where hard choices have to be made. Originally, the plan was to go to 29 Pieces gallery next. But, after a quick glance of the map, it becomes apparent that the location is just too far out of the way. So, for the final stop of my journey, I arrive at the Continental Gin Building Spring Open Studios just as they're closing up shop.

While the original goal of hitting every single gallery on the list proved impossible — the one-hour-and-40-minute time constraint didn't help — my First Annual (even though this probably won’t happen again) Deep Ellum Gallery Sprint was kind of a success, I think. I mean, I did make it to 15 galleries in just under two hours.

I didn't get much out of the art, though. So, yeah, there's probably a reason that they recommend you walk it. 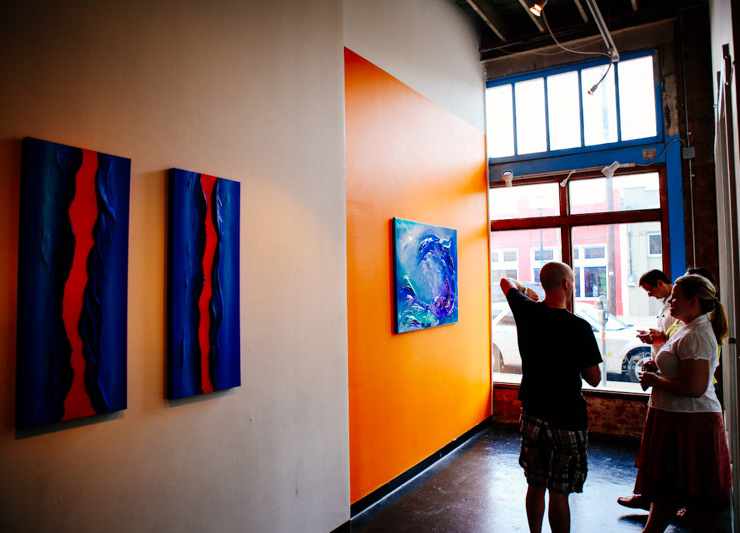 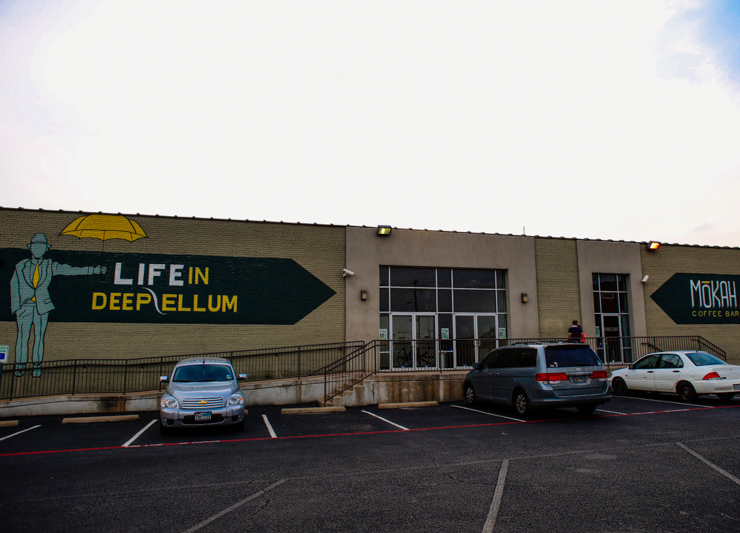 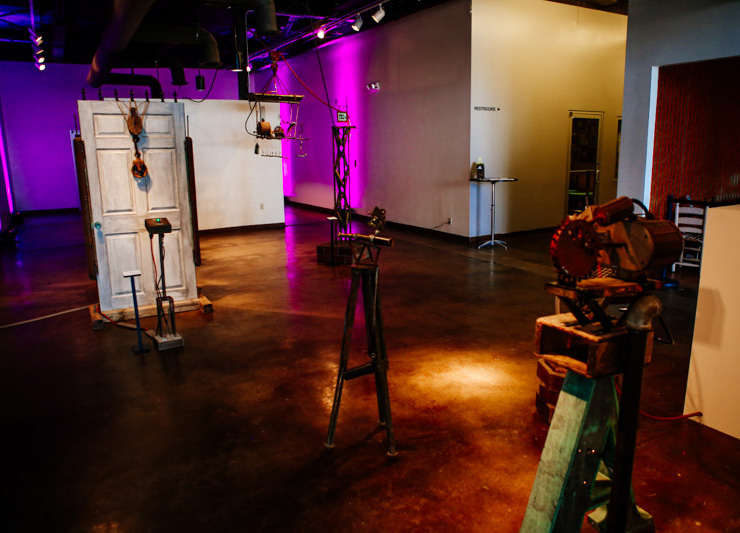 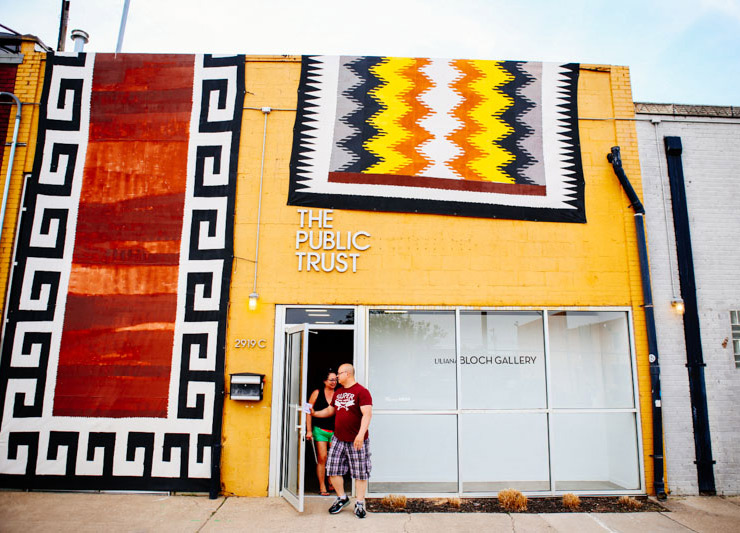 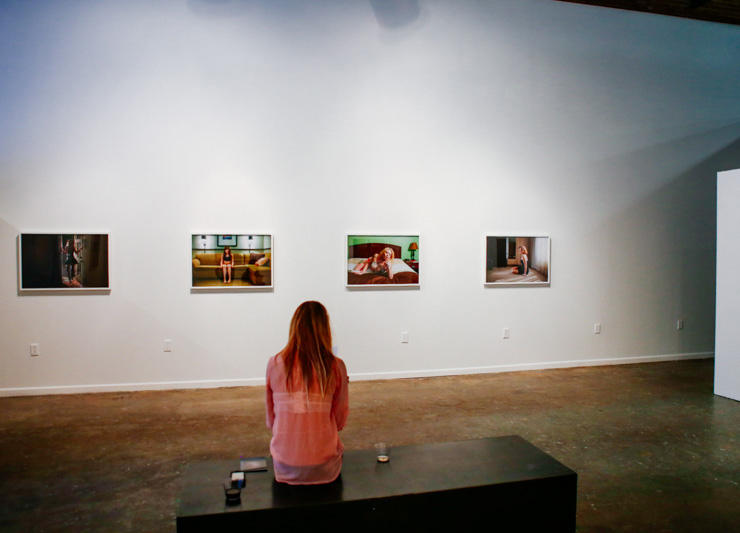 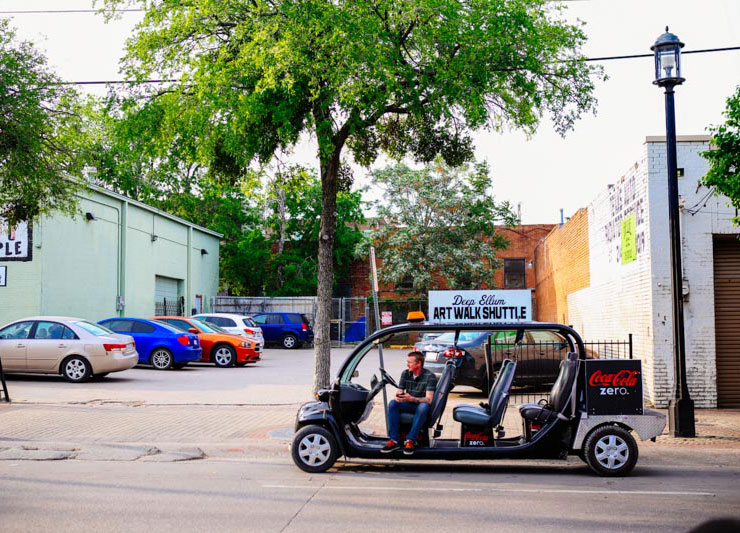 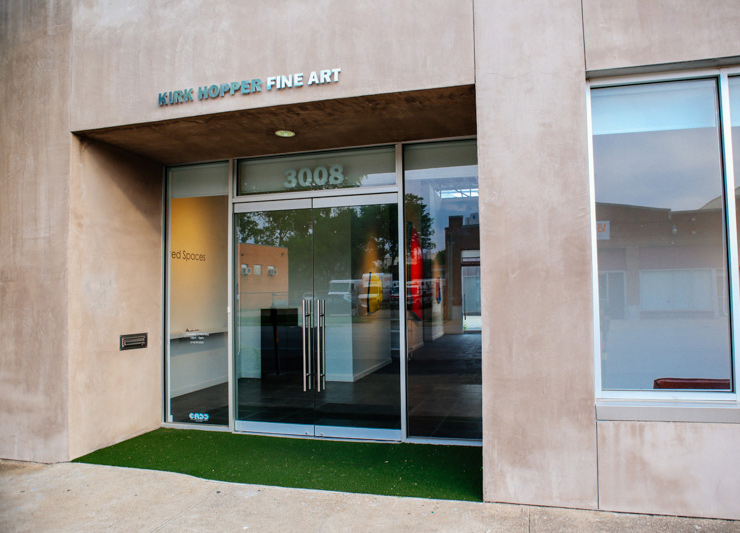 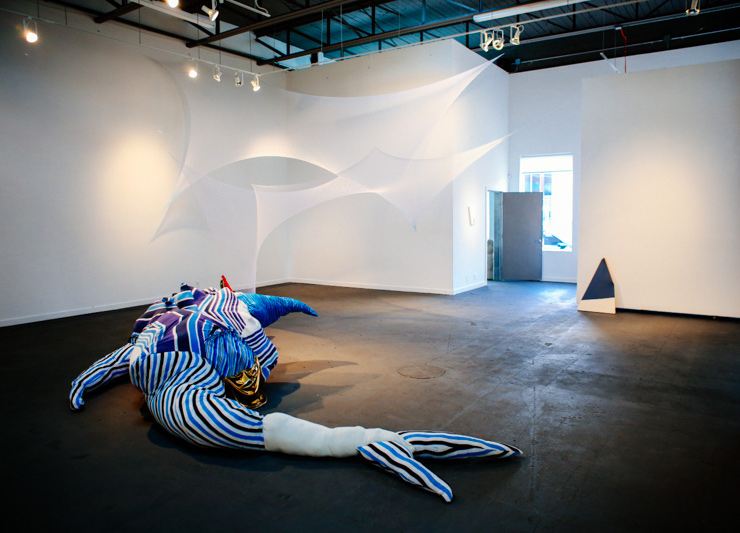 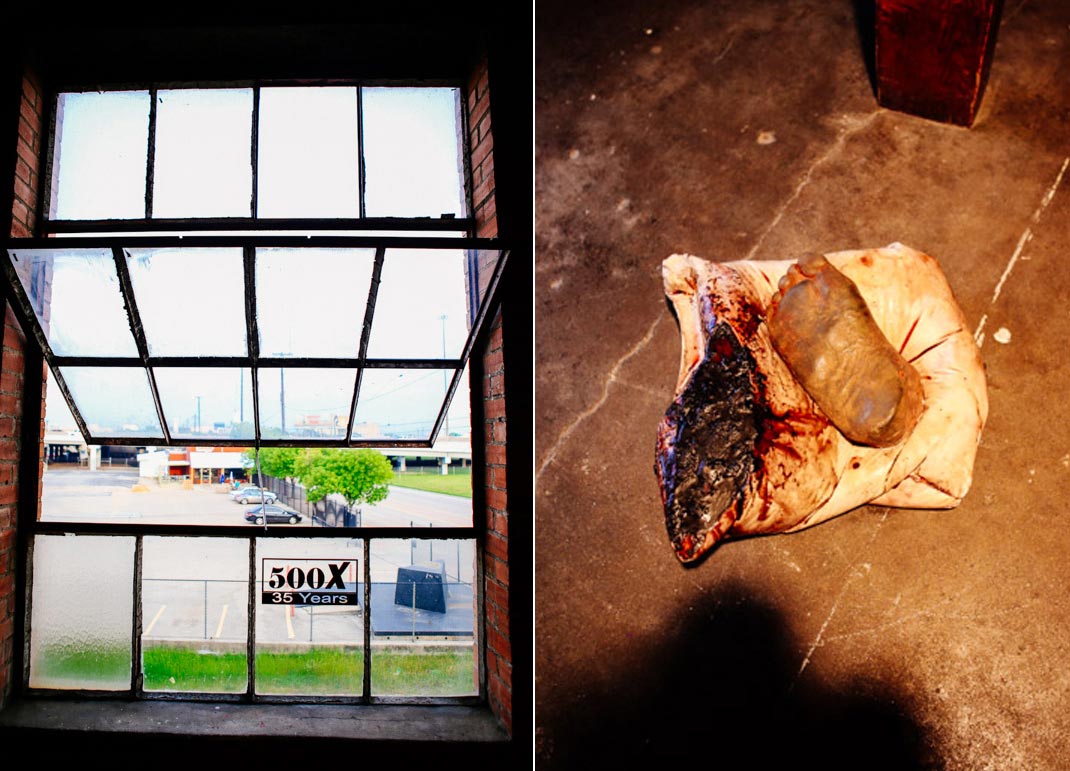 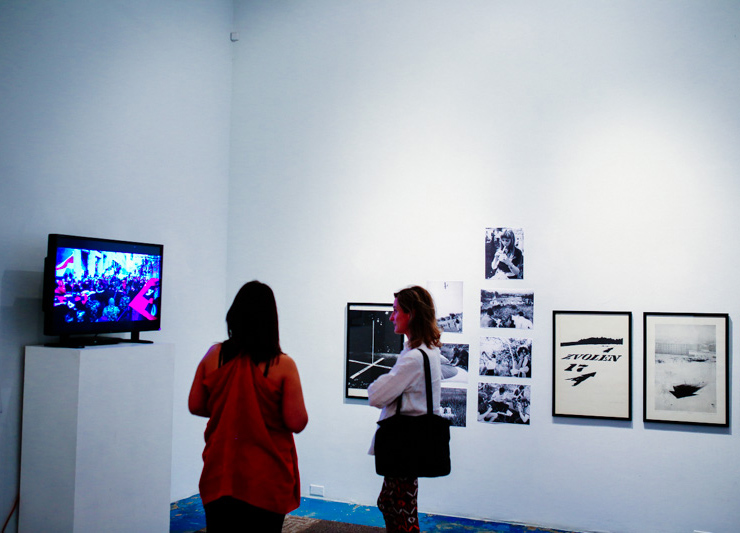 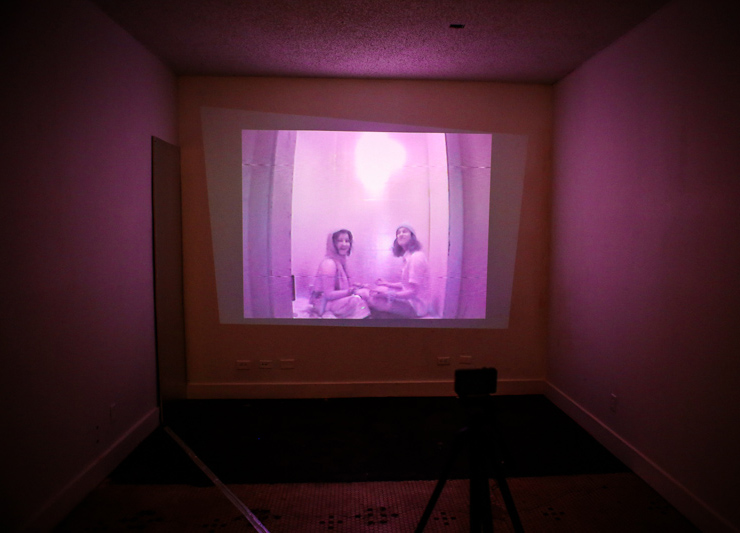 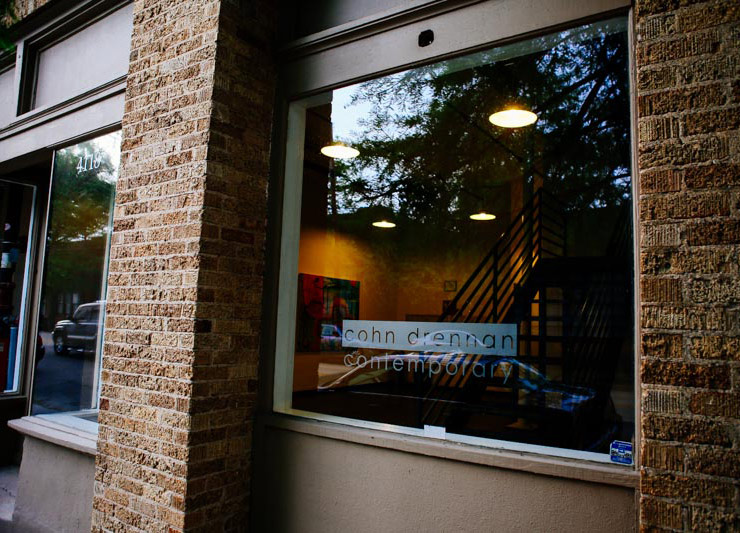 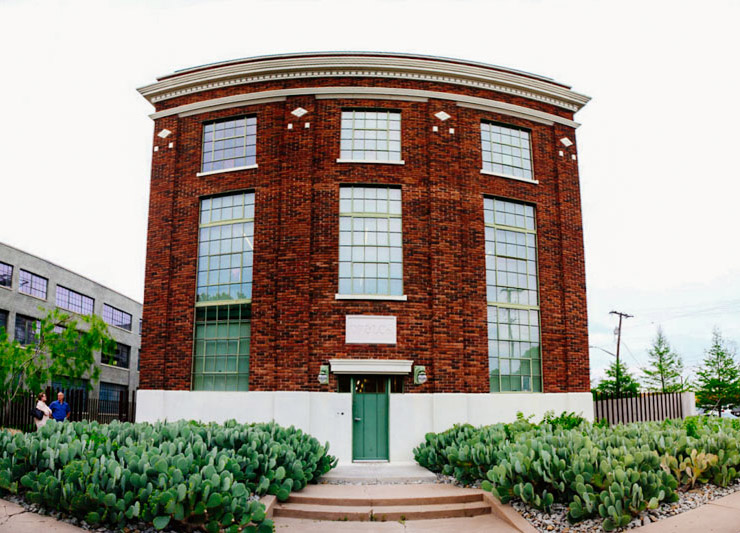 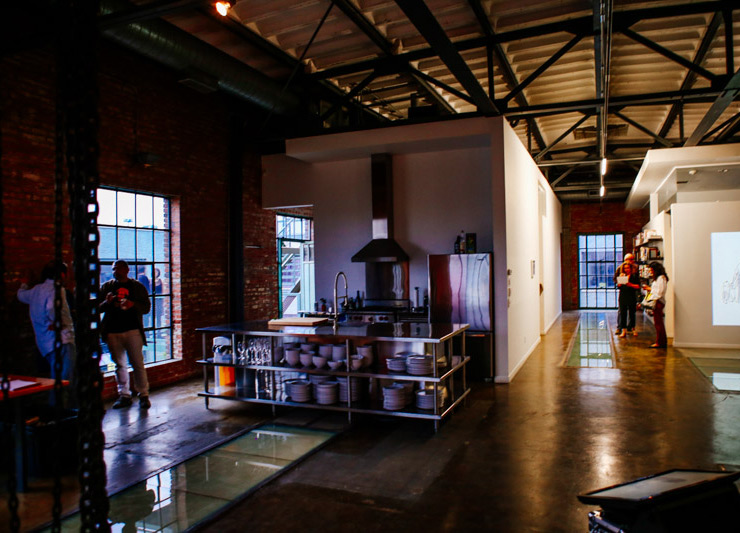 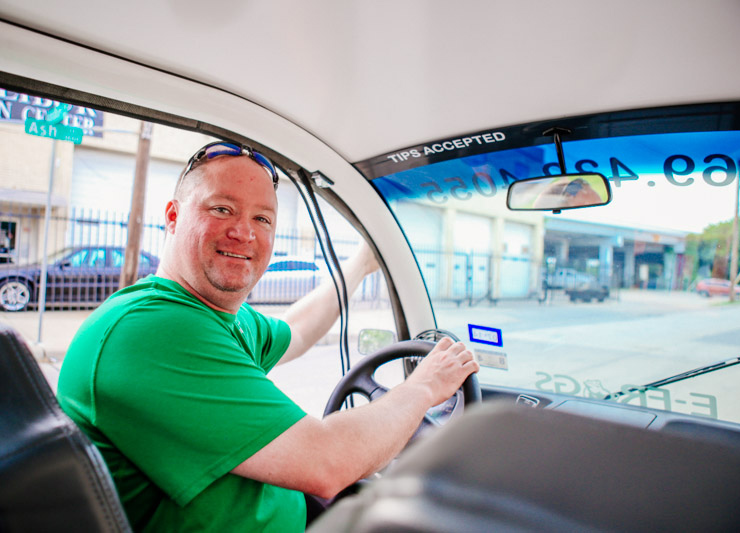 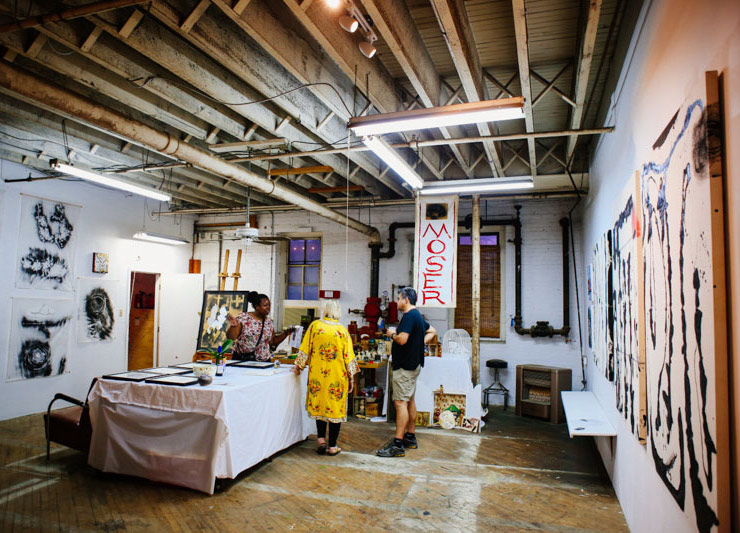 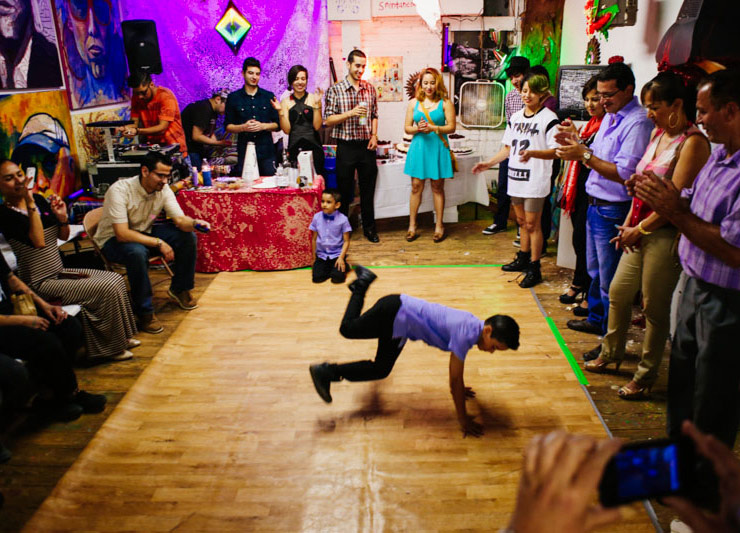 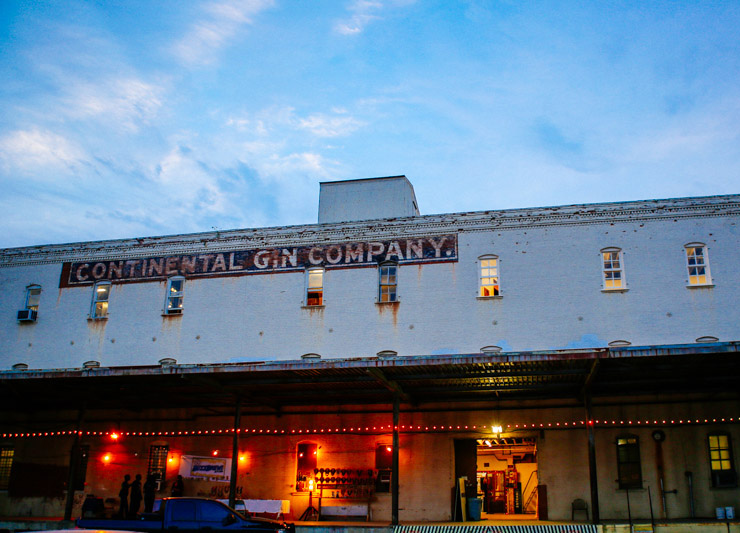