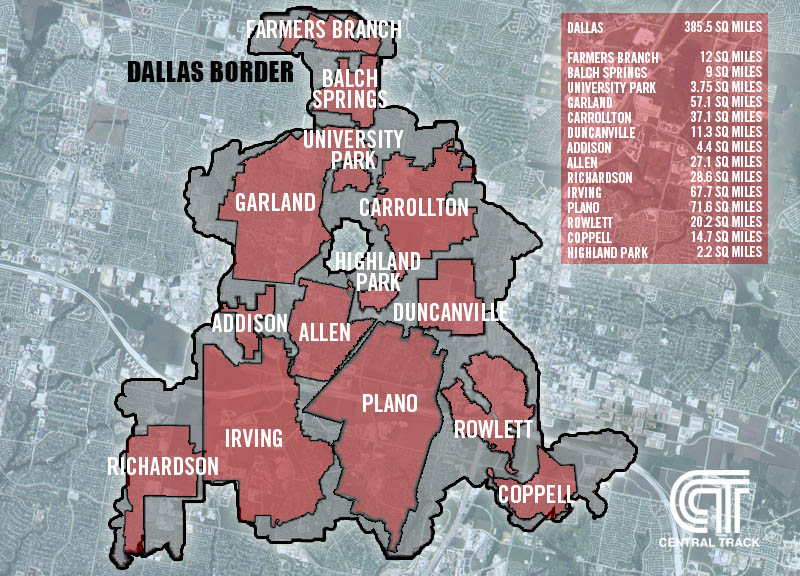 How True Is The Old Stereotype That Dallas Is Mostly Made Up of Suburbs?

The old adage about Dallas is that it’s a city comprised mostly of suburbs. And, certainly, given the amount of regrettable sprawl that has debilitated the city’s core development (especially in the downtown areas), most people accept that statement as a legitimate one.

Yet, really, how true is that so-called fact?

Tough to say. But it’s definitely not a 100 percent truth.

After all, on its own and without its many well-populated suburban cities included, Dallas is the 18th largest city in America as land mass goes, boasting 385.5 square miles within its borders. (Interestingly, Fort Worth comes in at 19th on the list, as Houston and San Antonio check in at Nos. 9 and 13, respectively.) That’s a significant chunk of land. And, according to the U.S. Census, more than 1.2 million people reside within the city limits, making Dallas the ninth-most populous city in the States.

Again, those numbers are nothing to shake a proverbial stick at.

Of course, things get tricky — and Dallas’ reputation as a suburban haven seemingly becomes solidified — when the North Texas region as a whole is brought into play. As a whole, the Dallas-Fort Worth-Arlington Metropolitan Statistical Area boasts a population of more than 6.5 million people, making it the fourth-largest region in America, placing it one slot ahead of Houston and trailing only New York, Chicago and Los Angeles in that regard.

That massive population jump, combined with the significant jump in the rankings of such figures, no doubt plays right into the old Dallas suburban mecca stereotype. But individually — and, if the many spring and summer festivals put on and proudly branded as their own by these municipalities are any indicator, these suburban cities would very much prefer to be viewed individually, thank you very much — many of Dallas’ suburbs stand capably on their own. And, to their credit they really do: Just-released breakdowns of population growth between the 2010 U.S. Census’ April 2010 release and July 2011 shows that four North Texas cities — Plano, McKinney, Denton and Carrollton — are among the 15 fastest growing cities in America.

That may be great news for North Texas as whole, but these population jumps only add so much value to Dallas itself in the end. And then there’s the fact that these population increases are a relatively new phenomenon.

So, again, we wonder: How true is the stereotype about Dallas being a land of suburbs?

To answer this question, we decided (and, we acknowledge, were fully inspired by a boastful LA Weekly post about the sheer size of Los Angeles) to take a look at Dallas’ land mass as compared to that of its suburbs.

Dallas’ suburbs are hardly tiny — Plano’s 71.6 square miles isn’t too much smaller than Boston’s 89.6 — but, in the end, Dallas still significant dwarfs all of them.

In fact, as our map shows, without any distorting of their land masses, you can comfortably fit 14 Dallas-area suburbs within the borders of Dallas itself. Hell, maybe even a few more if we got a little more clever with our placements of them in this map. Nonetheless, we think it’s a pretty revealing graphic.

And, if it doesn’t fully answer our question about whether Dallas is, in fact, a land of suburbs, perhaps it starts us down the path toward an answer. Because, sure, there may be many suburbs of note around Dallas. But, to be certain, Dallas stands just fine on its own.