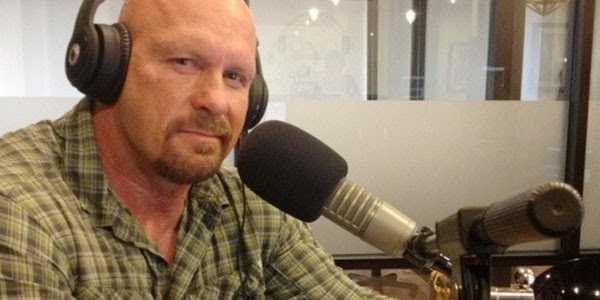 The Five Best Wrestling Podcasts For Preparing Your Ass For WrestleMania 32, Brother.

Wrestlers love talking. It's an important component of establishing their character and drawing in fans, be it to boo or cheer for them.

It's arguably more important than the actual wrestling.

In that regard, it's not surprising that some retired wrestlers have managed to stay in the spotlight by, in some capacity, keeping right on talking. These days, podcasts provide the perfect medium for old grapplers to do what they arguably do best — only without the physical strain that wrestling places on the body.

And with WrestleMania 32 coming to Jerry World in April, it's a great time to start getting familiar with some of these podcasts, too, so as to better prepare yourself for all that madness.

That in mind, here are some of our favorite places for getting that wrestling fix.

5. Talk Is Jericho. You should really skip the first 15 minutes or so of this podcast every week, frankly. Truth is, most wrestling fans would agree that Jericho has been in a bit of a slump lately. One of the most exciting light heavyweights of the '90s has had to slow down in his mid-40s and, in turn, his promos (talking segments) have gone from great to cringe-worthy in a matter of a few years. This is in full display in the introduction to his podcast, which is filled with lame jokes and out-of-touch opinions on the wrestling industry, as well as awful sponsor shilling for products such as MeUndies. However, Y2J is still able to conduct some great interviews, especially when he has the likes of wrestling legends such as Edge and Paul Heyman on to give insight to the world of pro wrestling. And episodes like the Eddie Guerrero tribute show with Jericho, Chavo Guerrero and Dean Malenko are can't-miss.

4. MLW Radio. Hosted by former WWE writer and producer Court Bauer and Mexican wrestling legend Konnan, MLW Radio takes you behind the scenes into the writers' room. The two have experience in all aspects of the business — Konnan helped found AAA, the biggest lucha libre promotion in Mexico, and they still have connections working inside WWE — so they are able to give an insider's take as to what goes on behind the scenes. Their network also has multiple other wrestling-related podcasts from various wrestlers and bookers like MVP, Kevin Sullivan and Jim Cornette, with varying quality.

3. WOOOOO! Nation with Ric Flair. The Nature Boy is regarded as one of the best talkers of all time. Also, he's been in the wrestling business for-fucking-ever. At 66 years old, he would still be wrestling too, if he could pass WWE's physical. The Dirtiest Player in the Game has seen and done it all, and there's no one better at telling road stories than him. The most notable episode of the relatively new show would be Flair's interview with Hulk Hogan only a couple months after the Hulkster's racist tirade was leaked.

2. The Art of Wrestling with Colt Cabana. Colt Cabana is the face of indie wrestling. If you aren't familiar with indie wrestling, you probably know him as that guy that CM Punk mentioned in his infamous pipe bomb promo. Cabana has been on the road for the past 16 years, and has had stints from being a jobber in WWE to being tag team champion in Ring of Honor. What's so great about his podcast? It's explained in the title: Cabana looks at wrestling as a performance art; he talks with and interviews famous wrestlers about how they've honed their craft, why they love wrestling and how much they've sacrificed to do what they love. Cabana captures the humanity behind what is often looked at as an inhumane business. Most notable, Cabana was the first person to interview CM Punk after he walked away from WWE in January 2014. There, Punk dishes all the dirt on the inner workings of the WWE, from the clueless doctors to the hypocritical business practices.

1. The Steve Austin Show. Stone Cold Steve Austin opens up a can of audio whoop-ass twice a week, interviewing some of the most famous wrestlers in the business with the no-bullshit attitude only he could get away with. Oh. Hell. Yeah. Austin's podcast is so good that WWE even worked out a deal to have special live streams of his show on the WWE Network, where he's interviewed some of the biggest names in the company, including Paul Heyman, Triple H and Vince McMahon himself. The Vince McMahon episode is especially of interest because Austin is able to show just how completely out-of-touch with the audience McMahon really is. One of the most special things Austin does on his show is audio commentaries for some his most famous matches and some of the best matches in wrestling history, including his match against The Rock at WrestleMania X-Seven and his match against Bret Hart at WrestleMania 13. Austin talks about all of the details that go into calling a match and just how difficult it can be to put together a match to satisfy the millions of people that are watching live. It's must-hear stuff — that's the bottom line.