[Q&A] The Humble Beginnings Of 10k.Caash. 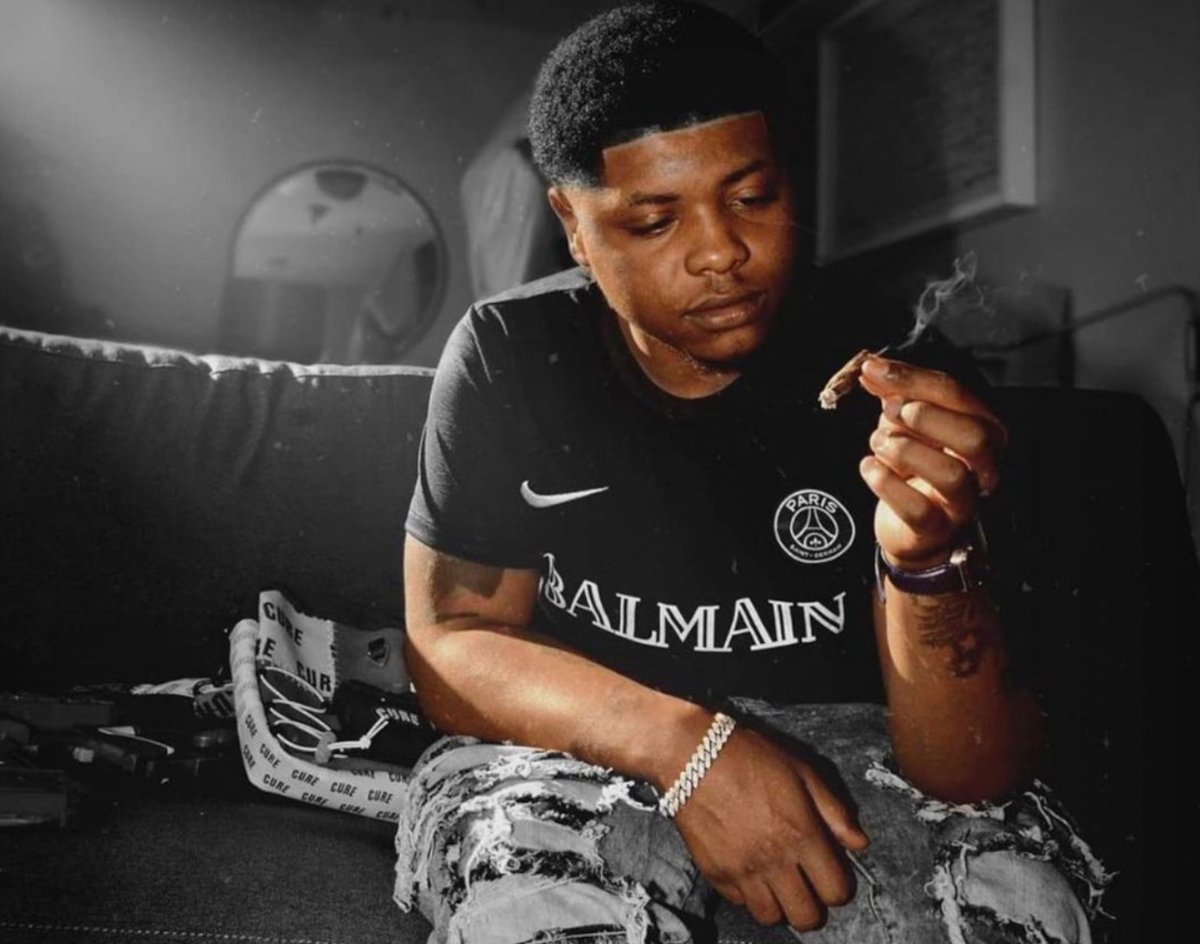 From Viral Dance Videos To Getting Signed To Def Jam Recordings, The Dallas Rapper Says He’s Not In It For The Fame — He Just Wants To Make Others Happy.

Back in 2018, a popular dance craze started blowing up on social media.

Rappers like Lil Uzi Vert, Drake, Travis Scott and Ski Mask The Slump God had performed The Woah, a bounce-and-lock-type of dance, in live performances and music videos. Also, it was just a cool little dance to do for social media video posts.

Very quickly thousands of people began filmed themselves “hitting” The Woah with their friends, classmates and so on. It kind of became part of Gen Z pop culture, which we know is constantly growing and we love that, actually. It’s the “Dougie” of their generation, if you will. The Woah’s popularity even led to artists releasing songs inspired by the dance for the purpose to be, well, danced to.

If we go back in time to its origins, Lil Uzi was actually one of the first celebrities to adopt The Woah, but who really invented it?

If you ask Oak Cliff rapper 10k.Caash, his answer is simple.

As a teen, 10k.Caash, whose real name is Treyvon Britt, started making dance videos on social media platforms like Triller and Dubsmash with the dance crew Rollie Bros, which was comprised of D Smooth and their friends. However, 10k.Caash had become one of the stand-out dancers of the group — earning them views on social media for his dances.

10k.Caash just likes to dance. In fact, he was so hungry for it that he would go out and network with artists so he could dance to their unreleased tracks. Then Lil Uzi reached out.

Now, 10k.Caash is chilling with rappers and releasing his own music that’s not like anything we have in Dallas. After signing with Def Jam in 2019, he released his debut album The Creator, which perfectly describes his childish, comedic personality. It’s the stuff his fans get rowdy to. He went on tour with his friend Lil Uzi while still in high school. Befriended Rico Nasty. Found mentorship in rapper G.U.N. Yet, it’s not about the fame nor the luxuries. He simply wants to make people smile. How? By making music that reminds him of his favorite things, but this year the 20-year-old wants to grow up a little bit.

His newly released album 10K — his seventh album — is a more “matured” take on 10k.Caash, which just means it’ll only get crazier from here.

We caught up with the icon about his come-up and the next phase of his life. (He’s a really cool dude, by the way.)

I like to start these things by asking my subjects the same question even though I know the answer. I ask them this way because I think it’s fun. So, let me ask you, “who the fuck are you and who the fuck do you think you are?!”

I’m 10k.Caash. Who the fuck do I think I am? I think I am 10k.Caash [laughs]. Man, who am I? I would say I’m probably the most energetic. I probably smoke more than anybody. I’m just a great person to be around. I’m never mad. I always have a smile on my face no matter the situation. I’m just never a down person, like nothing ever really gets me down.

When it comes to your music, is your ultimate goal to make people happy?

Yes. When I was young, I used to be sad a lot. It would be to a point where I wouldn’t talk to nobody. I would eat myself into depression and stuff like that. Around middle school and high school, I started dancing with people. It just made me happy. I never really thought I could just be that happy at that time of my life. In all honesty, I would say it would come from just me, like —  not going too much into detail — me growing up in the places where I would stay. I was the only child. I really stayed with my grandparents for half of my life. My grandparents are really really old, so I had to help them out a lot. My grandpa barely could walk and I had to help him. When it comes to like life stuff in general, I don’t take life for granted at all. At some point, somebody always can do worse than what you’re doing so there’s no reason to be down. You’re not in the worst situation that you possibly can be. Someone always has a worse.

What was it like growing up in Dallas for you?

I grew up in Oak Cliff. There’s not too much to say. It’s just Oak Cliff, you know, it’s gritty out there. You got to always watch your back. You got to watch who your friends are and that was also the hard part about everything. When I blew up, I wanted to do it by myself without anyone’s help. When it came to Dallas, I really didn’t want anybody over my success. Like how people touch other artists and have them over their success and, like, hold that above their head. I didn’t want anybody to do that for me. So, I took it upon myself to go and meet people and talk to people. I was steady blowing peoples’ DMs like, “You got any unreleased songs? Can I dance to them?” and this and that. Before I knew it, I was in my bathroom in Oak Cliff dancing to unreleased Juice WRLD songs.

Was dancing always a part of your life or was it something you were interested in as you got older?

I used to dance when I was very little. I used to dance to Yung Nation all the time. My uncles and cousins used to dance all the time. Dancing really is in the family. My grandpa used to breakdance back in his days, so I guess it’s kind of in my blood [laughs]. In middle school, nobody really made fun of for dancing because I was getting views. I was in middle school with almost 80,000 followers. I kind of always been going viral, so it really wasn’t anything new to me. Ugly Guy had a song called “I Beat My Meat” and we danced to it. It went viral because of my part and they had us on WorldStar and everything. It actually took Ugly God to a different level, so that kind of stamped us to where we can almost dance to anybody’s stuff and not get copyrighted. It was kind of great being the only people to actually do that stuff and have permission to do it.

So if you’re best known for your dances, how exactly did you get into rapping?

Lil Uzi Vert is actually the reason why I got into rap. He says, “You dance so you automatically like the beats, why not rap?” So, I met with Beat by Jeff and we made the beat in about three minutes and I made the rap in about four minutes. My very first song blew up. My first song was “Dip Swagg Dip.”

It sounds like you’ve always had a spotlight on you. Your fame is nothing new to you. Would you say you’re a pretty humble person or do you know you’re the shit?

I’m actually a very, very humble person. For the simple fact that my mom used to take me to concerts all the time. We used to always be backstage with all the rappers. I met half the rappers when I was young. I grew up to actually get to know them. It was actually kind of different growing up and seeing people who started back then and now them seeing me and it’s like, “Wow, they actually look up to the stuff that I do.” It’s actually shocking to me, but also the reason for me to always be humble.

Wait, you used to go to concerts with your mom? Was she a huge fan of that kind of stuff?

Yeah, I have pictures of me and Geezy, me and Yo Gotti. Rae Sremmurd. I used to always be at concerts. I used to leave school to go to concerts with my mom. My mom still goes to concert, like she’s would call me and be like, “there’s a concert coming. Can you give the floor seats?” I be like, “Yeah, I got you” [laughs]. She definitely loves shows, she just loves music.

Would you say that part of your music career was inspired by your mom?

Yes. The type of music that I listen to, I really would not know if it weren’t for my mom and my grandparents. My grandparents used to listen to Little Richard a lot. They used to listen to a lot of old school. Honestly, the old school music … there’s just something different about how the bass hits, the guitars, all the instruments that play. It made my music. I wanted my music to have some type of feel like that. When they were making music back in the ‘60s/’70s, it was for people always sad and depressed about a situation they were going through. Music will make people happy. No matter what the situation was, any time you turn the radio on, there’s dancing going on, happiness, all happiness everywhere. Even when it came to the Soul Train era, every time a black person would turn on the TV and see Soul Train they would get happy and dance along with the people. It shows that dancing is a way to make people happy. No matter who the person is. If you dance, you’re going to be happy.

Your music, obviously, is a little different than what most rappers are doing in Dallas. You’re inspired by sounds from video games and cartoon, and just quirky sounds in general. It sums up your personality pretty well. How do you incorporate your personality into your own unique sound?

Why go that direction?

Because nobody does. Like, we’re all different, you know? And at the end of the day, we’re all humans, but we all have different personalities. And why would I want to copy another person’s personality when I have my own?

Right. Just like dance, gaming and cartoons make us happy and distract us from life’s hardships, which is really what mostly inspires you. However, do you have any musical influences? Anyone you admire?

Actually … no [laughs]. Yeah, no. I actually listen to artist that’s in Dallas right now. I do really do that, but when it comes to having an inspiration, I don’t really have any.

I actually do not write. I freestyle everything. I honestly just have fun. The whole purpose of my music is to have fun.

I can see that just based on your debut album The Creator, how is this new album you just released different?

This new one is to show that I’m maturing. I’m only 20 – so I’m maturing. I want to make dance music but I want my niche to be more mature now. This is still kind of the same, but I was aiming towards more of a mosh pit. I want to get more crowd interactions for my next couple shows. This one I just dropped, it was something to give out for the new year and have a new sound.

Catch 10k.Caash at So What?! Music Festival in Choctaw Stadium May 2022.