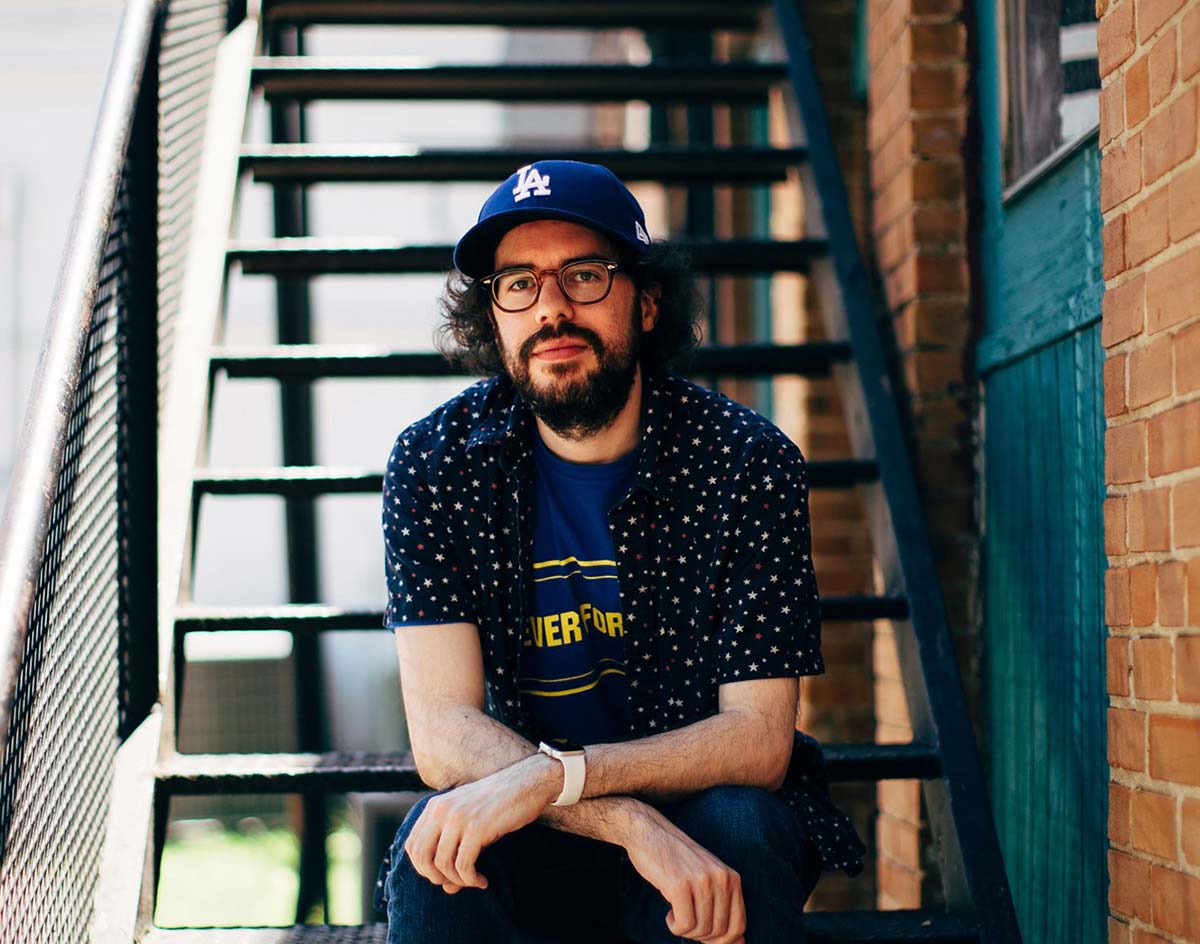 After Years Of Complaining About Not Fitting In Locally, The Singer-Songwriter Finally Found His Place When He Quit So Actively Looking For It.

Singer-songwriter Nicholas Altobelli used to say — publicly, repeatedly — that he didn’t feel like he belonged in North Texas.

He would say it in interviews, onstage and even in his own songs.

But he stuck around here just the same. Eventually, he found himself working well with certain respected regional players, including Salim Nourallah and John Dufilho.

He also found work outside of music. A few years ago, he became a full-time teacher — and, interestingly, that career move seemingly coincided with a creative spark. When he wasn’t teaching or taking care of after-school activities, he could be fond writing and recording new material at a rapid pace.

Along the way, he became a much happier person, both on and off stage.

Still, 2020 wasn’t exactly a cake walk for him. Even before the pandemic affected his life and, naturally, his work as a teacher, Altobelli faced the tragic loss of his uncle John, his aunt Keri and his cousin Alyssa, who died in the same helicopter crash that also claimed the lives of Kobe Bryant and his daughter Gianna in February of last year. (Altobelli politely declined to comment on the matter with us.)

He coped with these tragedies the same way he’s learned to in recent years — through music and education. Altobelli recorded an all-acoustic record called Kids, and entered into a master’s degree program. He released the album last fall, and not surprisingly, he’s working on another album right now.

He’s excited to play again, and his return to the stage will arrive with a June 12 gig at Opening Bell Coffee in The Cedars.

As he gears up for that show, he caught up with us to discuss how how life as a teacher has affected his life as a musician, how his latest album came together during the pandemic and what his life might look like if he one day opened a doughnut shop. (We’ll explain.)

I can tell you really love your job as a teacher just based on what I see you posting on social media. It’s pretty clear that becoming a teacher lifted you out a funk you had been in for years. How have the last 12 months been for you?
Like most professions, it’s been a rough year. With that said, I’m super proud of educators for stepping up to the plate. It hasn’t been easy but we are a profession that will adapt to change, and I think we did a really great job.

Has the pandemic altered the way you talk to students in any way?
Of course! However, I am the same teacher virtually as I am in person, which is basically in the style of a game show host on too much caffeine.

Did the pandemic alter or derail your plans to obtain your master’s degree?
My master’s program was entirely online, so I was very lucky that it didn’t alter my plans at all. It was a great experience because it really helped me prep for what teaching looks like on the online platform, and I was able to transfer some of that knowledge to the classroom. Hopefully there isn’t another catastrophic world event when I go for my PhD in a few years!

You recorded your album Kids in the middle of the worst of the pandemic. What was that like for you?
It was horrible! I felt like the world was ending. I didn’t know if I was ever going to play live music again or if I was ever going to see live music again. It was already a really strange year, so it just brought out some emotions and memories that I needed to get on tape. I will say it was really nice to get back to that place of writing music, recording it on the spot and then releasing it. I might try to get back to that model in the future.

As a musician myself, I know there was a good stretch of last year where I was not that motivated to make new music at all. How about you?
Oddly enough, sort of the opposite for me. I ended up starting my eighth LP with John Dufilho. In fact, we just wrapped up on it — or at least very close to finishing. I used music as an escape last year, and I guess that’s where Kids came from. I’m excited about this new one. It’s very different from what I’ve done in the past. What was hard for me was not playing live. Live music for me is very cathartic, and not having that outlet was — is — really tough. I can’t wait to get back on stage.

I know there was also a time when you were embarrassed by your early material — to the point where you pulled them from digital services. But you’ve since put them back online. Why the change of heart?
I think, as an artist, you go through these waves of emotions regarding your past work. For me, I was making a decision to embrace this newfound love of music and recording. Earlier on, I really didn’t know what I was doing. But when I made Without a Home with Salim Nourallah, I finally felt like this was who I am and this was the music I was supposed to create. I was writing more about myself, and it was just more enjoyable to play and listen to. Looking back I probably should not have taken those albums down, because they are part of my journey. Fast forward a few years, and I find out that one of those old songs ended up in the video game Tom Clancy’s The Division 2. I’m still amazed that even happened. Because of that, I needed to put that song out or risk losing dozens of dollars. That’s where the Folklore compilation came from. It was super cringey and fun to go back to those old albums and handpick songs to go on the album. It really took me back to those times when this was so new and magical — and that’s not to say it still isn’t. However, when you do this for awhile, the new car smell tends to fade a little.

You made no secret about how you’ve distanced from your once-devoted fandom to a certain singer-songwriter whose name rhymes with Bryan Atoms when that expose about his sexual misconduct came out in the New York Times in 2019. Have you found a better replacement in a band or artist that hits the way he did for you for so long?
[Laughs.] Bryan Atoms is going to be my new band name! Thank you for that. I’m always listening to music, so I don’t know if I have an artist that really hits me hard. I love the new Taylor Swift albums. The song “Betty” is incredible and should be celebrated. I’m like most people who have a thousand-plus song Spotify playlist that just shuffles through. I don’t have one ride-or-die artist like that. I’m a music fan and love all kinds. If it’s good, I’ll listen to it. I don’t care what it is. Actually, there is one song that I have on repeat right now: “Scared to Live” by The Weeknd. Amazing song.

For years, when we would talk for interviews, you would say that you wished you lived somewhere else — and preferably a place that doesn’t have brutal summers. What has kept you here all these years, instead of say, Indiana?
I hate summer. This is why — despite my amazing hair — I will never be a country music star. I have California DNA in me, so it’s really hard to endure 100 degrees. With that said, I have a good thing going here, and I don’t see myself moving anytime soon. Maybe one day when I’m old and senile — let’s say in the next 10 years — I’ll pack it up in search for a cooler climate. In the meantime, as long as I get an occasional thunderstorm, I’ll be good.

Do you have any plans to do more recording this year?
Yes! Like I said before, we are wrapping up an LP that John Dufilho and I have been making since last fall. It’s called Technicolor Hearts. I’m super excited about it. There are some amazing special guests on it like Eric Slick of Dr. Dog, Doug Burr, Kristy Kruger, Salim Nourallah, McKenzie Smith and others. Sorry for the name-drops, but that’s the music business!

I’m really proud of this one. It’s also super different from how I’ve made albums in the past. We started with zero lyrics and complete songs, and we just jammed in the studio. We also experimented with different sounds and stuff. I’m beyond excited to get it out there. I think I’ll probably have it out either by the end of the year or early next year. Or maybe I’ll just drop it on a random Friday and not tell anyone, but I don’t think my publicist would like that. So, stay tuned. Maybe you’ll hear something in the fall.

OK, last question. One of the more charming developments of you becoming a teacher is you posting about how much you love when your students bring doughnuts in to class — to the point that you’ve even threatened, perhaps just jokingly, to open up a shop of your own one day. If you were to open your own doughnut shop, would you play daily shows in there?
No way! I’ll be too busy tasting and testing the doughnuts.