[Q&A] Where Do You Go When Your Gigs Disappear? 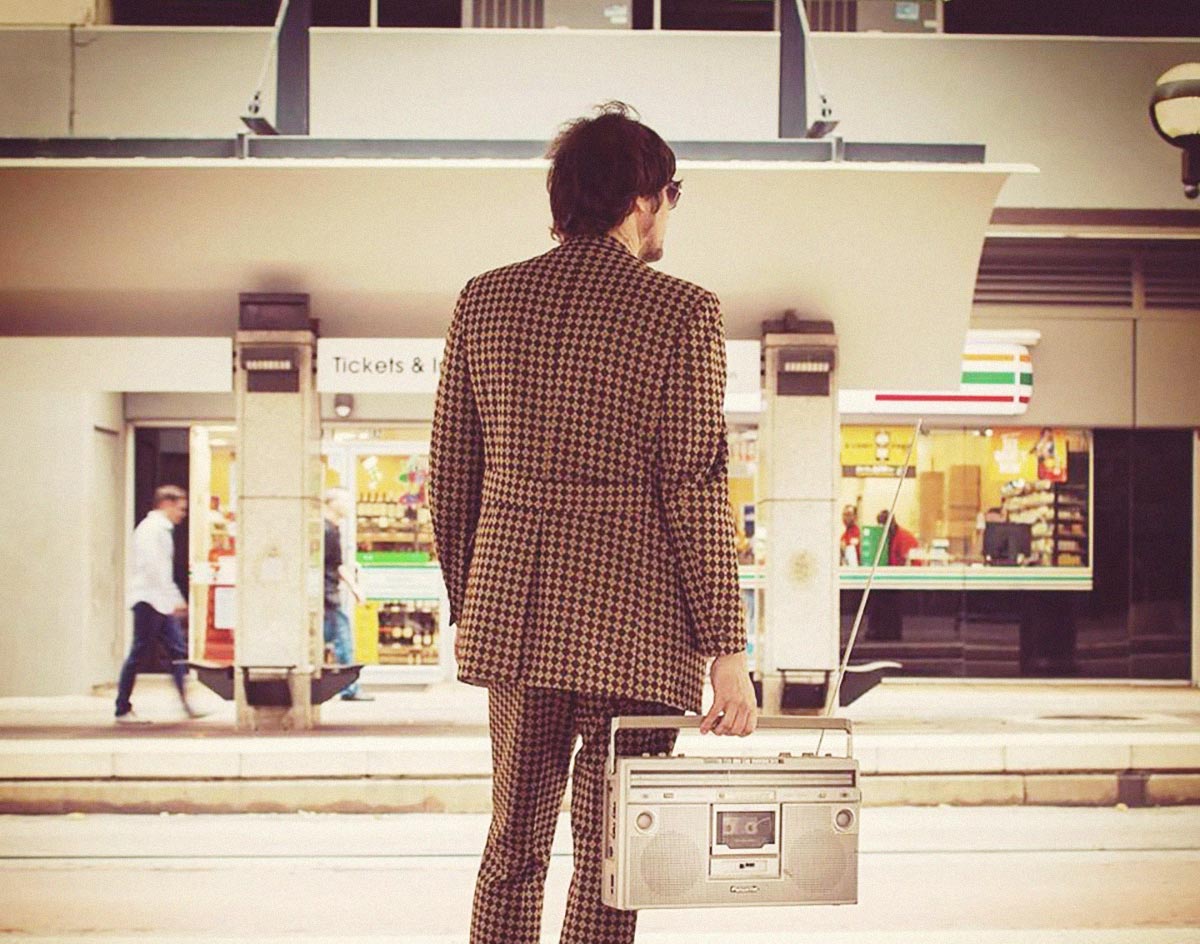 When The Pandemic Shut Down The Tour-Happy Dallas Musician Salim Nourallah’s Efforts Abroad, He Turned His Focus Toward Revamping His Studio.

More than three decades into his music career, Salim Nourallah remains one of the most prolific contributors to the Dallas music scene.

Along with the slew of solo albums and collaborations that he boasts under his belt, he’s also run the successful Dallas recording studio Pleasantry Lane Studio for going on 20 years now, working with acts ranging from Old 97’s and Sealion to Chris Holt and Black Tie Dynasty. Through his record label imprint Happiness under the Palo Santo Records banner, meanwhile, he’s additionally released albums with bands from all over the world, including acts such as Snowy Band, Catholic Action and Emma Kupa.

He bases all of these efforts out of Pleasantry Lane’s offices within a garage near the M Streets that he has converted into a fully functional, state-of-the-art recording operation. It’s a sleek-looking space enhanced by the fact that it’s neighboring garage has additionally been converted into a space for hosting small shows when not serving as a hang-out spot for bands. And, simply through word of mouth, his remains a frequently booked business.

Still, the pandemic — as it has many — hit Nourallah hard, on both the production and performance sides of his life. There were some upswings, though. These days, he’s brought in Dallas musician John Dufilho — arguably the only Dallas musician with a longer resume than Nourallah’s own — to serve as an engineer and producer at Pleasanty Lane.

SEE ALSO: [Q&A] HOW A RECORDING STUDIO SHIFTS IN A PANDEMIC.

These days, both Nourallah and Dufilho say they have a lot to look forward to.

Ahead of the release of Nourallah’s new Your Birthday Without You LP, we caught up with him and Dufilho at their studio on the night of the first “cold” front that the fall slowly breezed in. Throughout our talk, we discussed the history of the studio, how this pair came to work together and what they look forward to for the rest of this year and into 2022.

So, the story I heard about the last year and a half (or so) was that Pleasantry Lane was renovated — and then the pandemic hit. Is that right?
Nourallah: Not quite. A part of it’s right. When the tornado ripped through Highland Park [in 2019], my tracking room took some blows. A tree fell on it. There was water coming in a wall. There was no rebar in the floor because it was never designed to be a studio — it was a garage. The building was basically saying, “I’m done.” Bob Suffolk came over and he was like, “We’re gonna have to take everything out and start over.”

Because I also have the space next door, I thought, “OK, there’s never been a better time, because we’re going to clear out the studio and do all the repairs.” We put the XLRs in the underground and set up the headphones, making it into a real studio.

The renovation took months, so by the beginning of the pandemic, we had just finished the new, glorious tracking room. And then the pandemic hits, and everything is shut down. But that’s also part of the story of how John and I combined forces.

John, along with your many bands, you previously worked for a songwriting company, right?
Dufilho: Not really. I wrote songs for a living, and I still do. I was working out of a post-audio house with Kevin Brown. He usually handled the TV and radio commercial stuff. I handled all the composing and songwriting stuff, and sometimes we’d switch around. When the pandemic hit, nine-tenths of the ad agency work we had went away. But Salim and I have had plans to work together for 20 years. [Laughs.] We’ve always made records together.

Nourallah: I was wanting to get the studio where it was more like a team, so it wasn’t just one house engineer. Having Kevin and John come in was awesome. I was completely grounded, and so was he. All our gigs were gone. We didn’t know what to do, really. There were no clients. John and I started working on a weird project I had called The Mustache Years.

My father was a Syrian immigrant who died in August of 2019. Two years prior to his death, I had been making recordings of him on a standing lunch date at a middle eastern restaurant called Sababa. I would go to lunch with him and turn on my recorder. I would start asking him questions. So I had hours. It was part of my grieving process. I had just talked to a producer in LA who was like, “Oh yeah, we should turn this into a podcast!” And so John started coming over and helping me edit and put a pilot to pitch. And that was the beginning of it. It was really nice not working on music.

And then, of course, we ended up working on music. [Laughs.]

We did a band album in Nashville with Marty Wilson-Piper from the Australian band The Church. The plan was, last year, we were supposed to put out this record called Nuclear Winter. Marty was going to come to America, and we were going to tour. But that was pandemic year, so all of that got erased by COVID. John and I waded into editing the record and sorting it out. There’s 18 tracks. It was a mess, and because there was no tour, I decided I wasn’t going to release this until Marty can come back to America.

Did you have clients lined up before the pandemic?
Nourallah: Yeah! We were gonna have a party. We were probably going to do valet parking and be stupid, and annoy all the neighbors. We felt we should celebrate the studio renovation, and invite all our friends. So that never happened, of course. I wouldn’t feel comfortable doing it right now, even. Now that it’s been renovated for a while, it’s like, do you have a birthday party two years after your birthday? No.

We didn’t have anything lined up. I was the only client.

You like to tour, Salim. I know in the past you’ve toured Europe.
Nourallah: Yeah! I was on a German record label for about 10 years. I went over there three times with my ex and our son — so it was very McCartney, early Wings-style. With touring, I’ve been really down lately. John’s been out, but I haven’t played a show in 18 months, at least. The last show I played was in Washington, D.C., with Rhett Miller. In April, I had an EP coming out, and Rhett and I were going to play a bunch of shows. We were going to play the Granada Theater acoustic, which I thought was pretty epic. It all got washed away, along with the Marty Wilson-Piper tour, along Catholic Action coming.

I feel like Howard Hughes right now. I’ve been living vicariously through John because he’s played a few gigs.

Dufilho: I haven’t played many, but I’ve played a couple.

Nourallah: We had some gigs in October lined up as Salim Nourallah and the Treefort 5 since the Hit Parade record. We were going to play this festival in Mineral Wells. We were going to try to set up a week around the band coming back together for the first time in two-plus years. One by one, it started evaporating. Now I’m playing one show in Mineral Wells at noon on Saturday, October 9. I’m going to drive to Mineral Wells, strum my acoustic guitar for 40 minutes, and that will be my return to live music! [Laughs.]

As someone that goes to shows and plays shows, are you nervous about either situation?
Nourallah: Well, I haven’t been to a show since I saw the Trashcan Sinatras at Opening Bell in the fall of 2019. And, again, I haven’t played a show since that show in Washington, D.C., at the beginning of 2020. That’s why I said I feel like Howard Hughes. [Laughs.]

Do you have your sights more on next year?
Nourallah: Mental health-wise, yes. I’m trying to get through the year. Somehow, it feels worse than last year. It felt like things were beginning to open up. I finally went on a vacation with my kids. And then delta [variant] rolls in and everything starts getting weird. Gigs start disappearing. I really don’t know.

We’re generating tons of music, and we’re working here all the time. The label is doing stuff. John and I have been working on this great British band called Diesel Park West. Me, Chris Holt and Paul Averitt did a Diesel Park West song for a Break in the Battle release. No one was administering their publishing, so I had to find the lead singer, John Butler, to get permission to release the song. That started a friendship. He looked my music up and loved it. The label put ot their Let It Melt album from a couple of years ago, and now Dufilho and I are working on their next album, which is going to be called Not Quite the American Dream.

The problem is, if you’re Taylor Swift, it doesn’t matter if you make five records and don’t play a gig; you’re still gonna sell a load of records. But if you’re me or John Dufilho or Catholic Action or Diesel Park West, if you’re not playing gigs, you can hardly sell any records. But are we supposed to stop making records, just because we can’t play gigs?

I’m piling up CDs in my garage that I can’t sell because I’m not playing gigs. I don’t have any sort of answer than, we’re just gonna keep making music and keep rolling. Hopefully, we can play gigs that are not just in parks. I don’t want to spend the rest of my life playing in parks.

This interview has been edited and condensed for clarity. Cover photo via Salim Nourallah’s Facebook page.