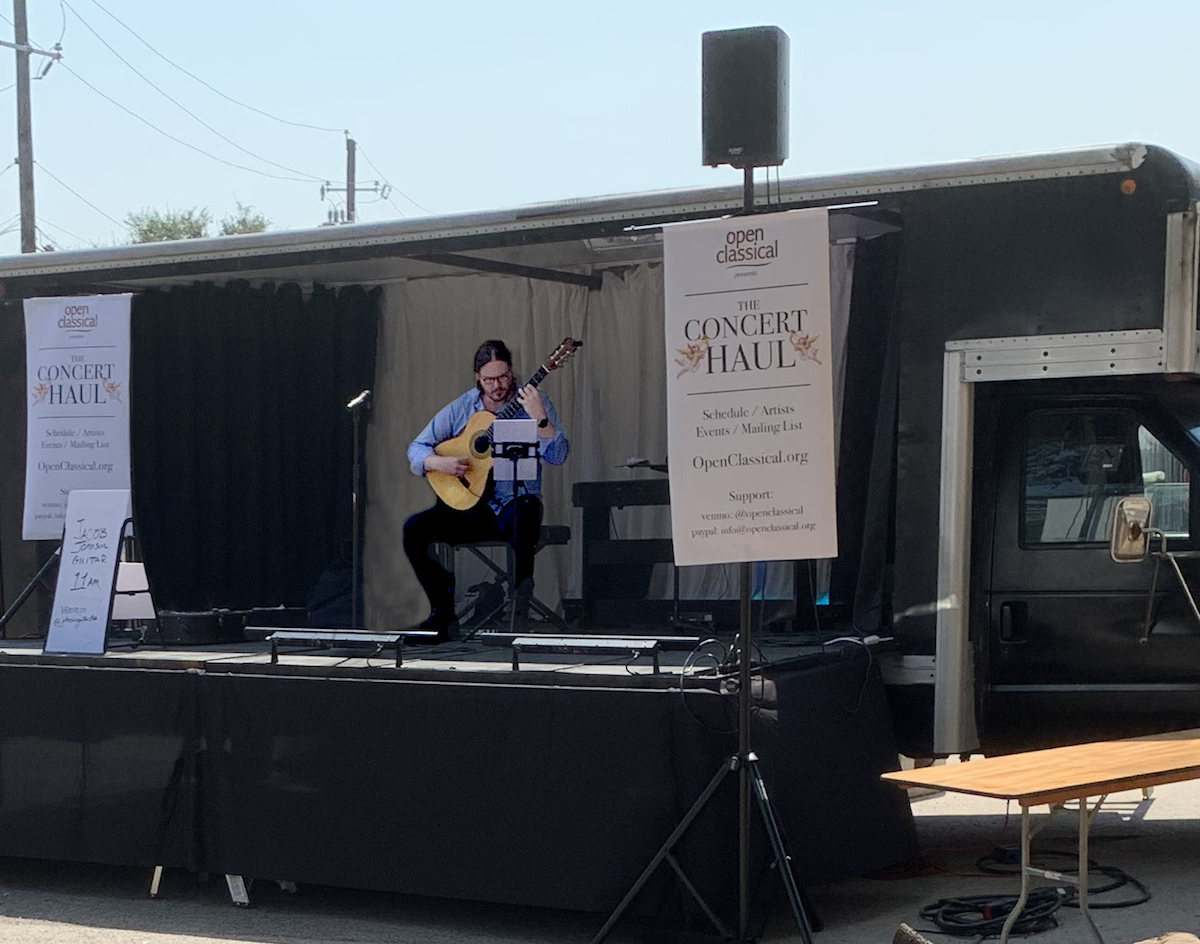 How The Composer & Arts Director Is Keeping Classical Music Performance Alive & Safe In DFW With A Mobile Stage — The ‘Concert Haul.’

Mark Landson is a well-respected and important member of the classical music scene in North Texas. Whether he’s playing with a small group of violin players or backing up Say Anything, you’ve probably seen him around. He’s a co-executive director at Voces Intimae, Artistic Director at Open Classical and a composer for Neo Camerata.

As much as classical music is steeped in traditions that date back centuries, hearing live performances in 2021 and 2022 has been a challenge, not unlike what all other concert productions have dealt with. Taking inspiration from a Baltimore-based mobile truck that transforms into a fully-functional stage, Landson’s Concert Haul slowly became a reality.

Boasting a stage large enough to fit up to a dozen musicians with professional microphones and a sound system, the Concert Haul is not a thrown-together sort of matter. Hoping to be a destination situation for locals, it’s a wonderful idea at a time where we don’t know how much longer this pandemic will continue.

Landson is taking donations for improvements to the Haul and has high hopes for its future. It’s already brought in a lot of donations and has been used a few times already. We spoke with Landson about how the concept came together and how it helps the local community.

How long has the Concert Haul been around as an idea versus it being a reality?

A year ago, a friend and patron of Open Classical approached me. This was facilitated by a similar truck that the Dallas Symphony has had in town. These people in Baltimore created this thing called the Concert Truck and they’ve used it several times throughout the year. The first time they had it was back in December of 2020. So, this friend and patron said, “I’ve got a box truck that we could make a mobile stage out of it. I was meaning to turn this into an RV. I bought it some years ago and I’ve never done it. I’d like to donate it to Open Classical.”

I jumped at the chance because I could see the enormous potential for this. Of course, this was at a time when we weren’t doing any kind of live events through Open Classical. For five months, I ran an online event called Online Showcase. We had an online open mic where people could send in split-screen videos on their own. Or I would help produce those videos. That kept our donors and audience engaged. But with the pandemic and online fatigue, those things that worked in May 2020 didn’t work in October or November 2020.

Shortly after that petered out, and it didn’t make sense to spend 80 hours a week producing a video show people weren’t watching anymore, (laughs) I was like, “Well, what are we going to do next until things start coming back?”

That was when he said, “What about this?”

What was the next step?

I made the decision this was going to be very useful beyond this special time in history. I got a studio designer and friend of mine, Bob Suffolk. He said, “I will design this project for free. You just have to pay the cost of my crew and the materials.” That was a wonderful thing.

But during the pandemic, when the contractor prices went up sky high, we went through this time period where Bob couldn’t get his crew to work on it. [Laughs] They had these other jobs that were higher-paying.

It really turned out to be an odyssey. Getting the thing completed was a work in of itself.

When was the turning point?

Luckily, all of these months later, we took it out in July for an event for one of our donors’ birthdays. We made some improvements and used it for the Deep Ellum Arts Festival in September. We were able to put 18 hours of programming on one of the stages.

I convinced the booker at the festival that we would use the truck instead of him building a stage. We did that for those three days. It turned out beautifully. The sound was great. People really enjoyed it.

We had some more improvements to make to take it out into the neighborhoods. You know, set up quickly, tear down quickly.

Now we’re ready to go on it. I’m very excited. It’s also very unfortunate the pandemic is dragging on and affecting so many live performances. But, on the flip side, it means the investment we’ve put into this is going to be worth more.

What do you hope to do with the Concert Haul if and when things get back to normal?

I’ve seen solo violin players serenade Target and Kroger parking lots with a sign that plugs their CashApp or PayPal name for tips. Your truck sounds like you’re doing something about the times and not being helpless about the times.

It’s a very difficult landscape to navigate. We have to adapt the most we can. There are a limited amount of things we can do. There are real financial restraints in putting on a show: the number of people, the number of seats. All of those value perceptions have been built up over many decades. Those are not changing. [Laughs]

Plus, there is real danger in having to cancel the show if somebody in the show got sick. That happens now all the time.

[Concert Haul] has its own challenges we’re going to figure out. The good thing is, I know the Concert Truck has been running for five or six years. They have signed with a well-known and respected classical booking agency. So there’s a business model they’ve created and it’s working.

Just with the donations, [Concert Haul] has been our most popular project. There are a lot of people that can see the value.