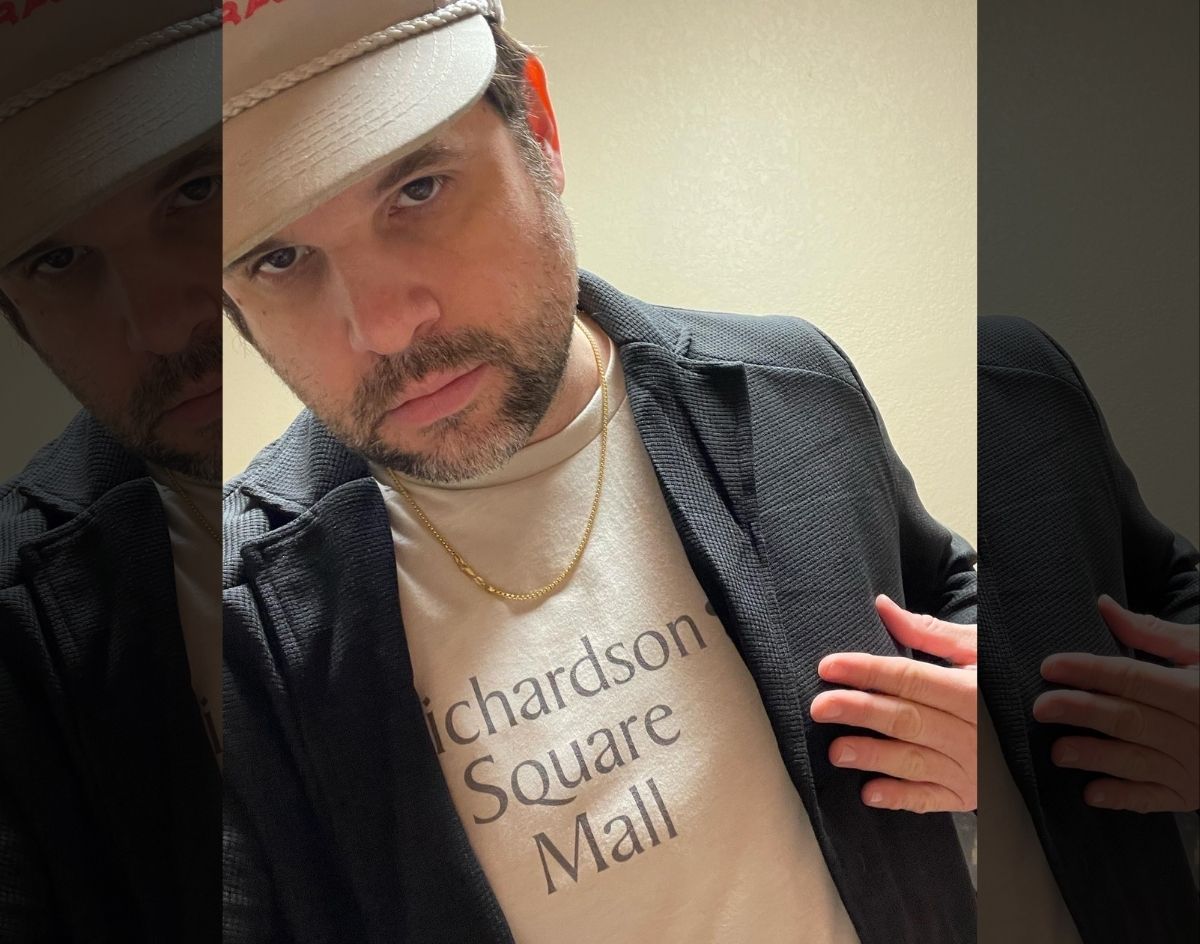 From Fort Worth To Los Angeles, We Catch This Seasoned Musician To Talk Projects Of Past And Future… And Where He Keeps His Grammy.

Jordan Richardson has only 20 minutes to talk before he has to catch a flight to Los Angeles. Speaking from his parents’ Tarrant County home, he has a lot to share in that small span of time.

Richardson’s enthusiasm for life and music is infectious. He grew up in Crowley, attended TCU and recorded bands in Fort Worth before he moved out of town to play with a band called Oliver Future, which morphed into forming a band with Ben Harper called the Relentless7. That band would tour the world, opening for numerous acts, like Pearl Jam. Richardson would later win a Grammy in 2014 for his work on a Ben Harper/Charlie Musselwhite album.

In recent years, he’s played in White Denim, Oil Boom and Epic Ruins, and he currently plays in Quaker City Nighthawks. And oh yeah, he’s the main guy behind the acclaimed Son of Stan project.

There are many good reasons why you see Richardson’s name as either musician, producer, mixer or mastering engineer: he’s reliable, passionate and always working on material. Whether it’s working at his Electric Barryland studio on farmland in a part of town that’s a little bit of Tarrant and a little bit of Denton County, or flying all over the country to work on various projects, he’s always doing something.

We recently featured a brand new Son of Stan tune called “Cool Country,” so we wanted to catch up with him and see what all he’s been up to. From Son of Stan to composing music for “The Hang Zone” midday show on the Ticket to what he has in the pipeline.

Oh, and where that Grammy of his is stored these days.

Have you been so busy in the last few years that you haven’t had a lot of time to work on Son of Stan material?

No, I wouldn’t say that. The last few years, the world’s been on fire, so all I’ve been doing is working on Son of Stan, just haven’t been playing out. The public profile might appear as though it’s gone dark, but there are probably two dozen tunes of all different varieties. Like, a rock EP that’s been pushed aside. Then there’s more compositional, orchestrated stuff. And the stuff that’s been given most of my attention lately. It’s still very much Son of Stan, but it’s kind of like this jazz/pop-oriented, late ’70s, early ’80s influenced pop music. That involves a lot of players from all over the country. I’m really going for it. [Laughs]

So there’s been a lot of stuff I’ve been working on. In 2020, I released a song called “No Consequence,” which hinted at this new sound, which is somewhere between drug-influenced psychedelic weirdness and then it will flip into this jazz-rock, Steely Dan influence.

During this time, how did making music for “The Hang Zone” come about?

That came about through having known guys at the Ticket for a long time [like] Mike Rhyner and Danny Balis. That was one way before I moved to California. A friend group [was] born out of the Barley House. Since I moved back, I’ve become pretty good friends with Jake Kemp. Along the way when they were launching the new show, he approached me about doing music for it. They were sussing out what the show was going to be all about and if I was interested. He threw out a couple of vague ideas. They wanted to do a late-night type open, so I met Dan McDowell at the studio and talked a bit more about it. Ultimately that turned into the composition me and Michael Doty did for that show. That led to doing other music for the show. They’ll have a segment idea and I’ll do music. It’s an ongoing relationship where if they need some music, I’ll try and do it.

Are you splitting your time between living in your apartment in Fort Worth and going out to Los Angeles for a few days at a time?

In a full move of freedom, I gave up my apartment. I’ve been either staying at the studio or in different places. I’ve got a place in Los Angeles. Other than that, subleasing in various cities that seem inspiring. Follow the work or follow the fun.

I think sometime in the spring I’ll do the same in Dallas, just to spend some time there. I’m always on the move. There was something not feeling totally correct during the winter storm last year. My mom had surgery. It became an oppressive feeling to be tied to an apartment. Once I did that, it was like, “I’ll just live a sublease life.” [Laughs]

Do people contact you from all over the world and ask if you could master something or fly out and record with them?

Yeah! It’s exactly that. Relationships that I’ve kept from my time living in Los Angeles, and the world’s kinda small. East Coast or New York or Nashville or Los Angeles, or even some things abroad. There’s a lot of producing going on and a lot of mixing and mastering.

There’s a lot of things on the burner [for Son of Stan] right now. There’s a lot of music being made. I think I’ll consistently be putting out at least a single every couple of months for the next few months. I’ll have an album’s worth of material. It’s just about how to release it nowadays. Because I know it really doesn’t sorta matter that much.

When you recently told me that you were not tied to a genre, I couldn’t help but think of how your Horses project started out as inspired by Dashboard Confessional. Only a couple of years later, Horses sounded like Steely Dan and Huey Lewis and the News. It seems like your desire to be really outside the box is not a new thing.

Yeah! I’d say that’s correct. The freedom of anybody having a “solo” [project] is an avenue to explore whatever sound you want to do from record to record. My favorite artists will change from time to time. Horses being Steely Dan-meets-Huey Lewis — that sort of carried into what ultimately became Son of Stan in a way.

I’m still referencing Steely Dan to this day. They’re my favorite band. They’re a band that’s always their signature self. They even have types of chords named after them. They’re traditional jazz harmonies, but people will reference a certain sound.

I think that’s what it is. It’s always me, the subject matter is always sardonic, [humorous], kind of twisted and dark, but it might be presented as pop music. There are characteristics that keep it the same no matter what I’m doing.

Putting out “Cool Country,” it was gloomy and it was Halloween in LA. I was listening to a lot of syrupy Los Angeles producer music. I was like, “I think Son of Stan can do something like that, without trying to make syrupy hip-hop producer music.” This would be my own take on that.

It’s very much whatever I’m feeling. And the more I hear from people who enjoy what I do . . . it’s not in spite of them, but it always makes me want to dig into something more.

Because I’m not a household name and I play with Quaker City Nighthawks . . . we’re pushing boundaries. The sound changes because you grow and get older. But the growth has been accelerated because the world’s on fire. So we’re like, let’s go for it!

It’s genre-less but not unlistenable!

[Laughs] Yeah! For sure! I’m heading to Los Angeles today and there’s talk of making ambient music with my friend. But when we get into there, it’s signature-ly ours.

Since you have a Grammy, have you ever wanted to place it on your mixing desk and point to it whenever an artist disagrees with you? John Congleton did it as a joke with his and I wanted to plant that idea in your head.

[Laughs] John’s the best! He’s an absolute, huge hero to me. We’ve met each other a handful of times and typically that was because I was seeing the Paper Chase. He’s a person I point to. I chase him in sound. I’ve heard that story and it cracks me up.

I might do that. I’m looking at it right now. It’s in my childhood bedroom right next to a trophy I won for an import car show when I was in high school and a Luka Dončić Funko Pop. [Laughs] 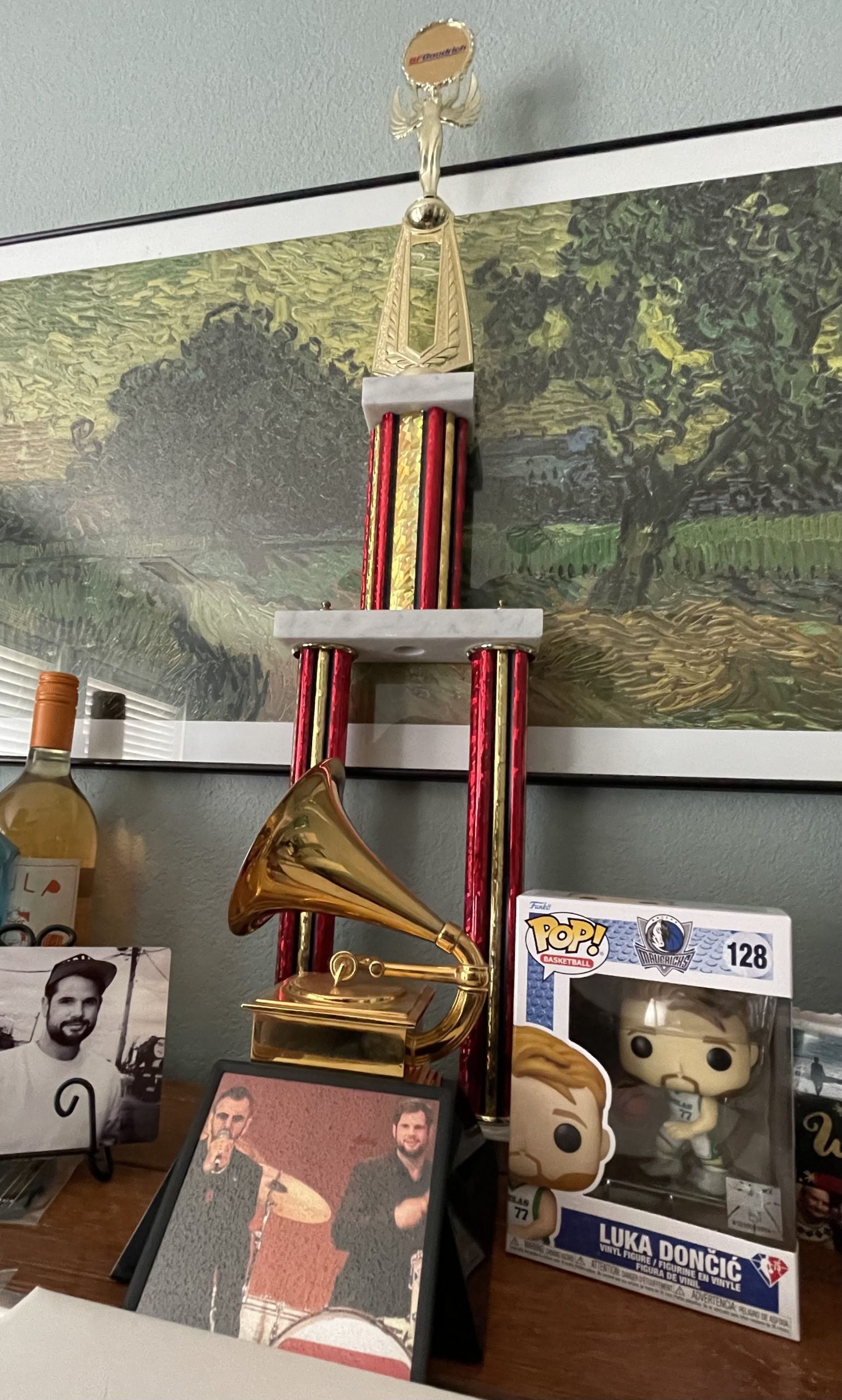