[Q&A] How To Make Marc Rebillet Look Good On Stage. 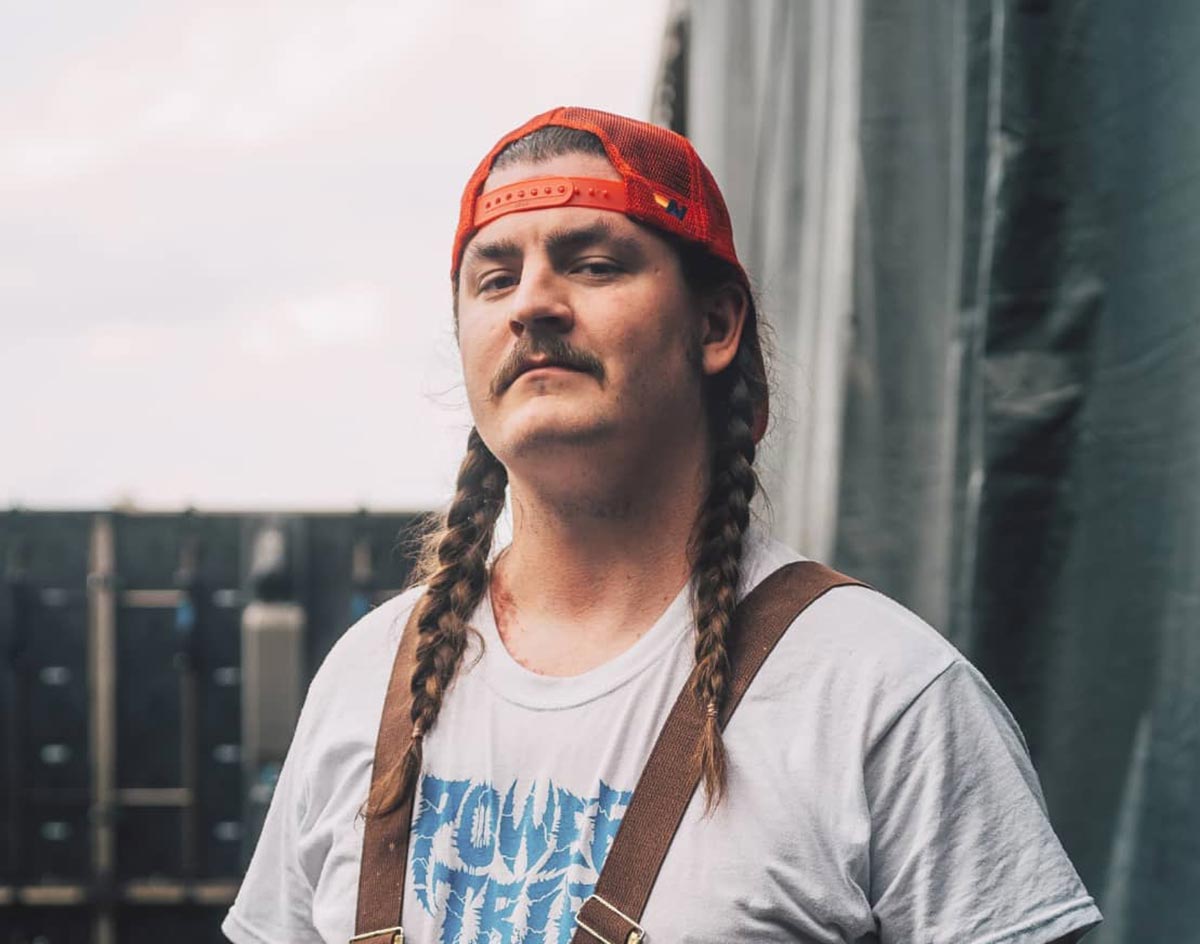 Sure, The Dallas-Sprung Master Music Improviser Knows How To Strike A Pose On Stage. But Photographer Shane McCormick Is The Man He Trusts To Capture Those Moments.

When we catch up with Dallas photographer (and sometime Central Track contributor) Shane McCormick over the phone, he sitting on Marc Rebillet’s tour bus and reviewing photos he shot at the Austin City Limits Music Festival while travelling to Birmingham, Alabama, for another gig.

Just a few years after moving back to North Texas and committing himself to life as a professional photographer, McCormick has racked up an impressive list of clients.

These days, he’s working double duty for the Dallas-sprung master music improviser Rebillet as both a touring photographer and a stage manager for the wildly popular performer’s Third Dose Tour. Along the way and through his @portrait_god Instagram account (more on this later), McCormick is sharing a warm, nuanced look at the people he snaps photos of for a living.

Over the course of our chat, we spoke with McCormick about how he landed the gig he has now, what it’s like to tour during this never-ending pandemic and how the tour has been for him and his small crew.

You’re originally from Austin, right?
I’m from Austin, yeah. I grew up there and have a lot of roots. I’m in Dallas now, though, living the life. That’s where me and Marc all met and became friends.

How long have you done photography professionally?
That’s a good question. I was paying my rent in college doing photoshoots while trying to be in a photo program at the University of North Texas. I ended up dropping out of school and going to work for HBO. I worked on a show called The Leftovers in Austin. I continued to work in the film industry for a while. Then there was a writer’s strike, so I ended up going into the service industry. I was working at a couple of music venues in Austin. Then I decided to move back up to Dallas.

I guess, professionally in Dallas, it’s been maybe three or four years that I’ve been shooting? But I shot before that. It’s been on and off. But I’ve been in full-on photo mode for a little bit now. I’ve got a little studio set-up. I had a studio with a couple of other photographers before coronavirus hit.

I think of photography in a way like musicianship. It’s kind of up to you to decide when you think of yourself as a professional. It’s not necessarily when people other tell you that you’re a professional.
Yeah! When I started shooting a lot of studio stuff, I was thinking I was a professional. I didn’t feel like I had imposter syndrome anymore — because people were coming to me to shoot, and I was being requested so many times that I was able to turn down gigs I didn’t want to do. That was probably right before coronavirus, and even during it. And now… I mean, I wouldn’t say we’re post-corona, but life goes on.

With photography, you always have to improve. You get comfortable with a style, but want to improve it. You learn along the way.
Absolutely! That’s how I kind of look at it. There’s always room for improvement. There’s always new ways to be creative and explore those kinds of outlets through the photography medium. Being able to be onstage and shoot live music, there’s a lot going on. Each stage is a puzzle because the lighting is different everywhere. And, also, the artist is going to be completely different. Marc Rebillet will decide he wants to go crowd-surfing — and I have to be ready for that, be in the right place at the right time, be able to telegraph his movements and stuff like that.

Do you usually shoot all-digital or some film or a mix of both?
I do a mix of both. I just recently got back into film. For a long time, it was something I couldn’t really afford. I didn’t have clients that specifically asked for film, so I didn’t do it. Everyone on the [tour] bus, though, we’re all photographers in some capacity. We love it, so we started shooting a lot of film. I just got a Pentax 67, which is a medium-format camera. I’ve been taking portraits along the way on the tour. But, for the most part, anything I’m being paid to do is all digital. You just can’t beat it.

Yeah, especially with when you shot a concert and people want to see it on Instagram that night.
Pretty much, yeah! They want to see it as soon as possible.

And have it all properly edited!
Yeah! [Laughs.] It’s nice being Marc’s photographer because I don’t have to abide by those rules. I don’t have deadlines. He trusts me to do my creative process the way I do it, in order for him to get the best images. And he loves them.

How did you get the gig as his touring photographer?
It’s a bit of a long story. I met him in Dallas one time. We were friends on Facebook after one of his videos had gone viral. I was like, “Oh, that’s the guy from Dallas!” and I added him on Facebook. We were friends for a year or two. He kept getting bigger and bigger. I kept seeing his stuff. Me and my friend Matt Battaglia decided to throw a joint birthday party at Ruins one year. We made a pretty funny flyer and posted it on Facebook. I guess Marc had just finished a show at BrainDead Brewery and decided to walk over and see what was up. I saw him and was like, “Oh my god! Marc! You’re here! So nice to meet you in person!” I asked if I could take his photo, and he said yes. I grabbed my camera, and four or five girls to come outside and surround him while I took his photo. He loved those photos. A few months later, I asked him if I could follow him around his European tour. So we ended up going to Europe and had a great time.

My producer that was helping me on that was Matt Battaglia, who asked Marc if he could be his tour manager because Marc didn’t have a tour manager at the time. So he sent him his resume, and about four or five months later, Marc said, “Hey, you want to do this?” And he’s been his tour manager ever since. And, since this was the first official tour after COVID hit, and he was like, “It makes sense to bring on Shane as the photographer.”

It seems like shooting crowds right now, it’s documenting an incredibly rare time. People want to have joy in such a terrible situation. Even photographing people with masks on, you can still see a lot of facial expressions in whatever they’re doing.
Absolutely! I hadn’t really thought of it that way. Being in Texas, it seems COVID ended a long time ago.

Or it never happened!
Yeah! [Laughs.] But we’ve done a number of venues where it was their first show back — and it’s a sold-out show for the first show back. And people are just so happy. They’re so happy to feel like they can live their lives again. That being said, each show Marc does, you have to show your vaccine card or show a negative COVID test within 72 hours. So the presence of that is still here. And everyone is wearing masks onstage, usually, unless it’s outside. It’s gone relatively smooth. The most difficult part is the venues not really knowing how long it’s going to take to get everybody in checking that kind of stuff. We’ve had some issues with that. But other than that, everyone seems so happy to be back. But you’re right: Even when taking pictures of people with their masks on, you still see the joy in their eyes.

OK, last question. I’ve got to ask: Was your Instagram handle @portrait_god something you came up with or someone called you that?
[Laughs] It started out as a joke. Back when Kanye West made his name something God or “Rap God.” All of my friends had changed their Instagram handles to something along the lines of their profession and then “god.” I did that as a joke and then over time, people started calling me that in the street. People started knowing me as “Portrait God.” Then people were like, “Oh, you really are the Portrait God,” which is hilarious. I was like, “Fuck it, I’ll just keep it.” It turns heads. It’s self-embellishing and funny. I’ve had some people think it’s an ego thing, but it’s not. It was a joke. But I love it now. It’s here to stay. 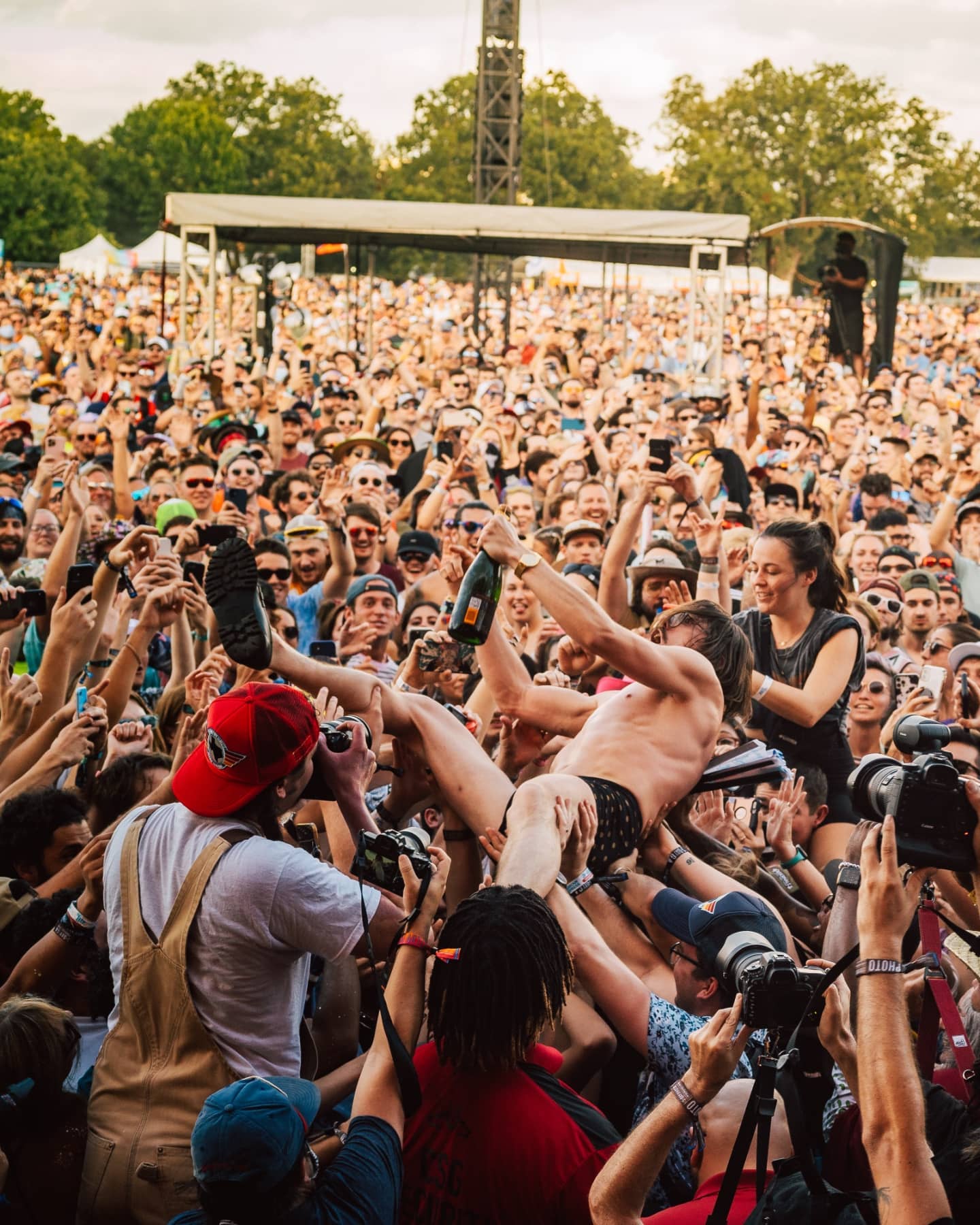 Where Marc Rebillet goes, Shane McCormick (in the red hat and with the camera up to his eye) follows. Photo by Karlo X. Ramos.

See more of Shane McCormick’s work on his Instagram page or at shanemccormickphoto.com.