Everything You Need To Know About Red Bull’s Formula 1 Show Run In Dallas. 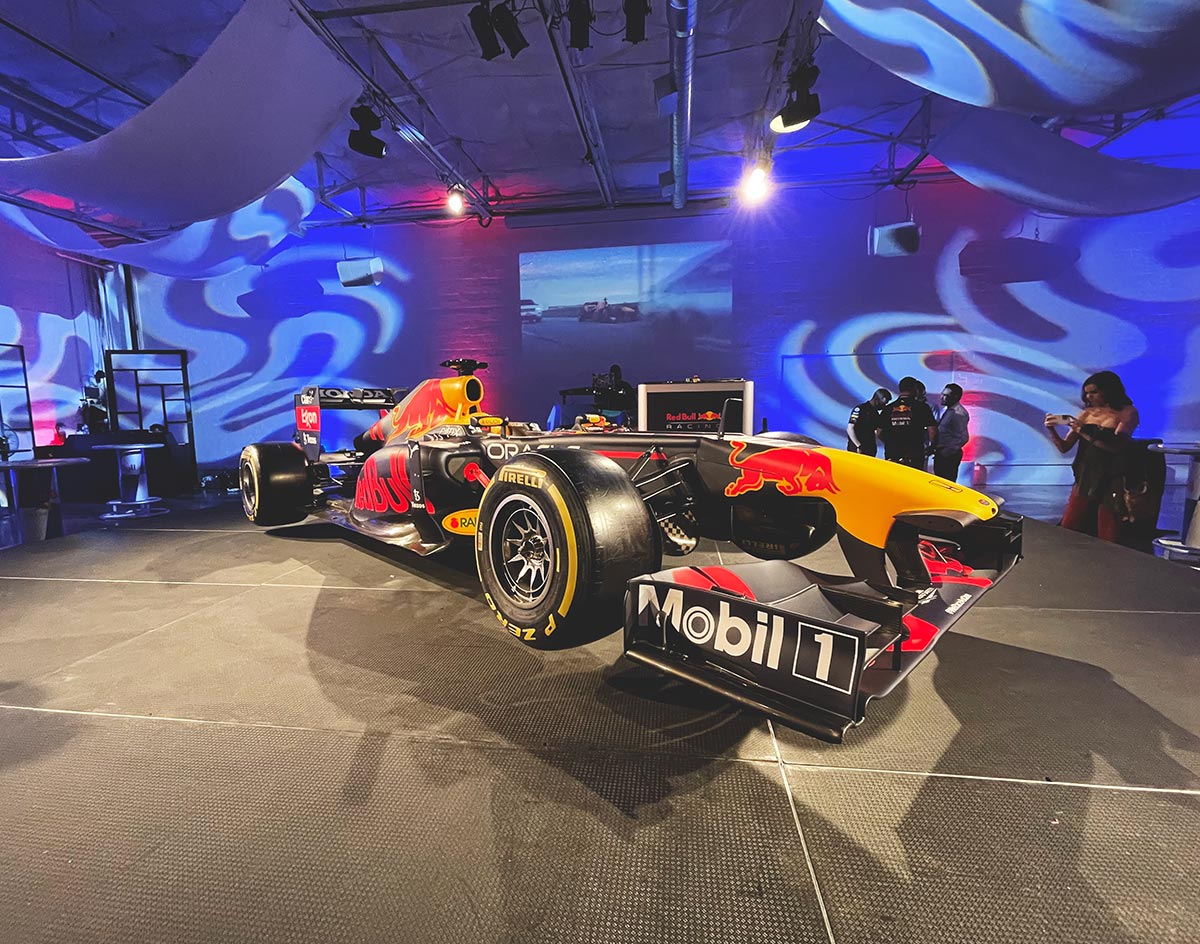 Before The U.S. Grand Prix In Austin Later This Month, Red Bull Racing’s Sergio Perez Will Drive A Formula 1 Car Through Downtown Dallas This Weekend.

On Thursday night in Dallas’ Design District, engineers for Red Bull Racing Honda’s Formula 1 team made quite a ruckus.

On a stage inside of the private event space The Empire Room, the reassembled the now-retired Australian driver Mark Webber’s 2011 RB7 car — one of two cars that helped the team win that year’s Formula 1 World Constructors’ Championship.

Then they turned on the car — one of the most powerful and technically complicated pieces of automotive machinery on the planet — and revved its engine.

The resulting sound was unreal. Just an absolutely thrilling thing to hear roar to life in person.

Listen to her roar. One of the loudest things I’ve ever heard in person. And I’ve seen My Bloody Valentine live! pic.twitter.com/DtfSwozctQ

Of course, that spectacle is only the beginning of what Red Bull Racing has in store for Dallas racing fans this weekend.

In celebration of the U.S. Grand Prix that will be hosted at Austin’s Circuit of the Americas later this month, Red Bull will host one of its celebrated Formula 1 show runs throughout the streets of Downtown Dallas on Saturday, October 16, from 10 a.m. to 2 p.m.

The event will feature a number of your typical Red Bull-associated flourishes — music, extreme sports demonstrations, probably some break-dancers and, of course, energy drinks galore — and will culminate with current Red Bull Racing Honda Formula 1 driver Sergio “Checo” Perez speeding that same championship RB7 along a 640-meter-long track that will run through stretches of Nowitzki Way, Field Street and Harry Hines Boulevard in the Victory Park and Harwood District neighborhoods.

It should be quite the scene — and, even better, it’s free to attend. In anticipation of the event, here’s everything you need to know about it.

When And Where Is The Event Taking Place?

The event, which will run from 10 a.m to 2 p.m. on Saturday, October 16, will take place right near the beating heart of the Downtown Dallas, actually.

The main staging area will be set up right in front of the American Airlines Center on PNC Plaza (formerly Victory Plaza), but the festivities can be observed from various area bars and restaurants, including Happiest Hour, Te Deseo and the W Hotel, and attendees can walk alongside the course and cross over it a various pedestrian bridges set up to help them do so.

They’ll need to in order to see various side-showcases set up alongside the track, including the exotic car showcase and the extreme sports demonstrations on the temporary vert ramp Red Bull is installing. Each of those events will take place a short walk away from PNC Plaza.

While there are some parking options available for the event where charges may apply, Red Bull organizers are also encouraging attendees to use rideshare options to get to and from the show run.

Below is a map detailing the event’s massive footprint, along with the designated rideshare drop-off points for it. 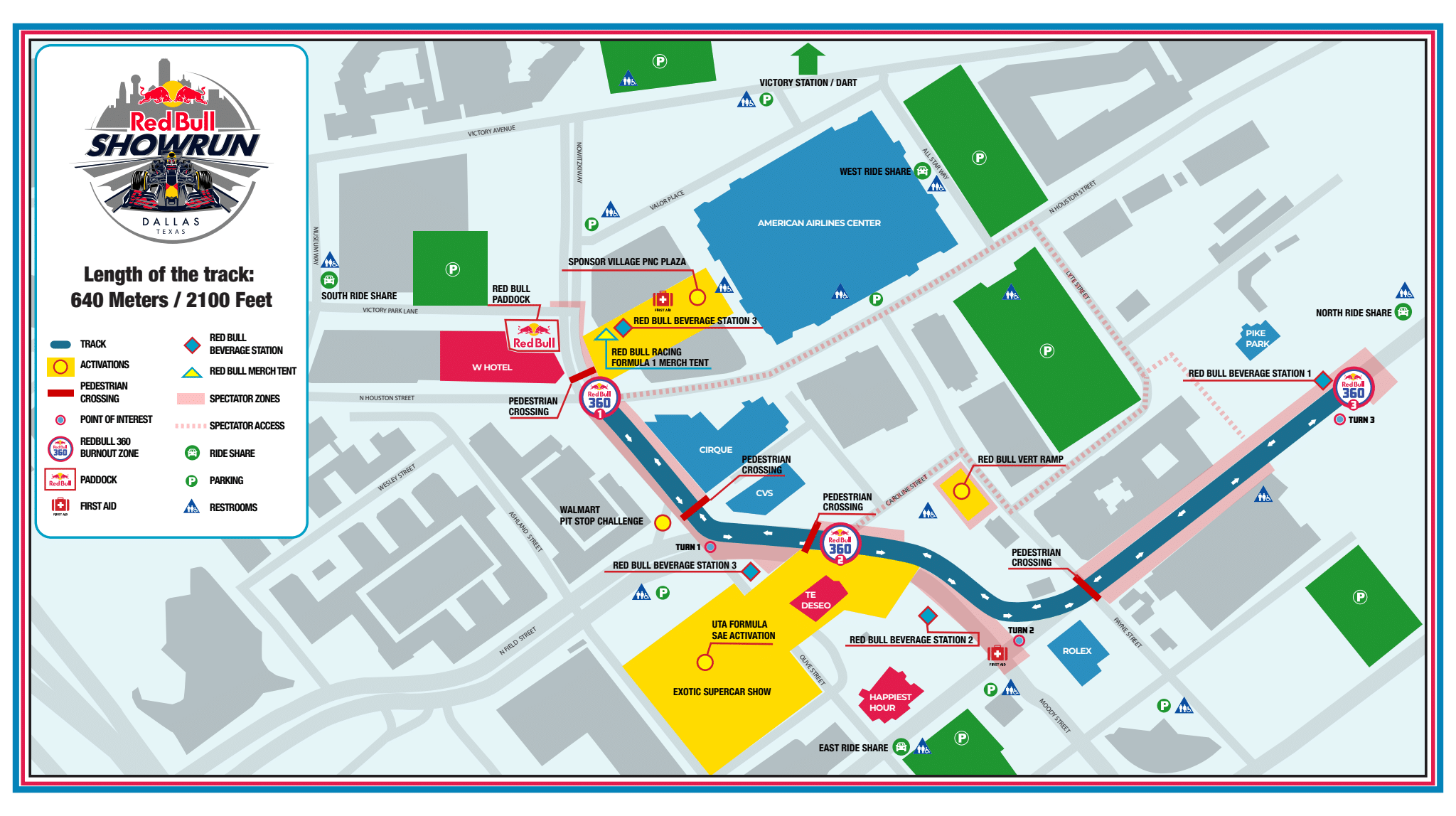 (Click on the photo and open in a new tab for a larger version.)

What All Is Taking Place At This Red Bull Show Run In Dallas?

A ton, frankly. While the event is ostensibly an event to encourage hype for the U.S. Grand Prix in Austin later this month, Red Bull is using the opportunity to champion its involvement in a number of other motorsports-related realms.

Here is the planned schedule of events, according to Red Bull:

People who live in the area or are hoping to drive through it should expect road closures to extend well before and after the event’s stated start and end times, of course.

How Much Will Attending Cost?

As already noted, this event is free to attend. And while there probably will be plenty of free cans of Red Bull to be snatched up along the course and event’s grounds, expect to pony up some cash for things like parking, merch, food and your usual sporting event fare.

Who Is This Sergio “Checo” Perez Guy That Everyone Is Freaking Out About?

Great question! In short, the man that race fans around the world know simply as “Checo” is a total badass and Formula 1 fan favorite — and Dallas race enthusiasts are absolutely hyped that they’re going to have the chance to seen him demonstrate his talents up close and personal this weekend. 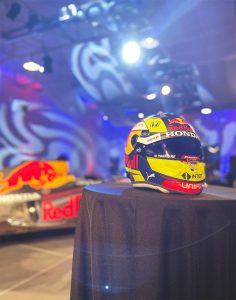 Perez has a cool story, for real. After starting out as a kart racer in his native Mexico, he moved to Europe as a teenager, without his family, to pursue his dream of becoming a Formula 1 driver — a distinction that can only be claimed by 20 or so men each year. And he reached his goal: When he made his debut in as a Formula 1 driver in 2011, he became the first Mexican national to accomplish that feat in more than 30 years.

But it’s taken him some time to come into his own. The 31-year-old is household name among motorsport fans and currently in his 11th season in Formula 1. Even though he renowned as one of the greatest tire-management drivers in Formula 1 history, Perez — who has driving for five different Formula 1 teams — has only recently seen his long-appreciated talents result in race wins.

In 2020, while driving for the Racing Point team in the Sakhir Grand Prix in Bahrain, Perez pulled off a miraculous last-place-to-first-place run — one of the wildest accomplishments imaginable in Formula racing — to take home the first win of his Formula 1 career. Earlier this season, his first while driving for Red Bull, he earned his second career Formula 1 victory at the Azerbaijan Grand Prix.

Perez currently sits in fifth place in the 2021 F1 standings. His teammate Max Verstappen is in first place. Their combined efforts for the team have Red Bull Racing currently sitting in second place in the 2021 World Constructors Championship. Verstappen is kind of the golden child in the world of Formula 1 at the moment — the likely successor to seven-time world champion British driver Lewis Hamilton’s throne at the best driver in the world. As such, he’s a major deal in his native Europe.

But here in the Mexico-bordering state of Texas, Perez is a cooler get for this Red Bull showcase. Expect to see tons of Mexican flags around the show run course in Downtown Dallas this weekend.

So This Is A Pretty Big Deal, Then?

Yeah, it really is!

While Formula 1 has historically had a hard time drawing fans in the United States — a perception that’s quickly changing thanks to the high-octane Formula 1-focused Netflix reality show Drive To Survive and the races’ live broadcasts on ESPN — the sport has long been considered the pinnacle of motorsports across the globe.

Thanks in large part to the exotic locations in which its globe-trotting races are held, F1 is also considered among the most glamorous sports in the world. Check out a race on TV and you’ll see movie stars, models and all kinds of other celebrities cheesing at the chance to get close to these race drivers.

It’s a whole scene — and it’s kind of wild that the travelling circus is coming to town, even for a commercial spectacle like this.