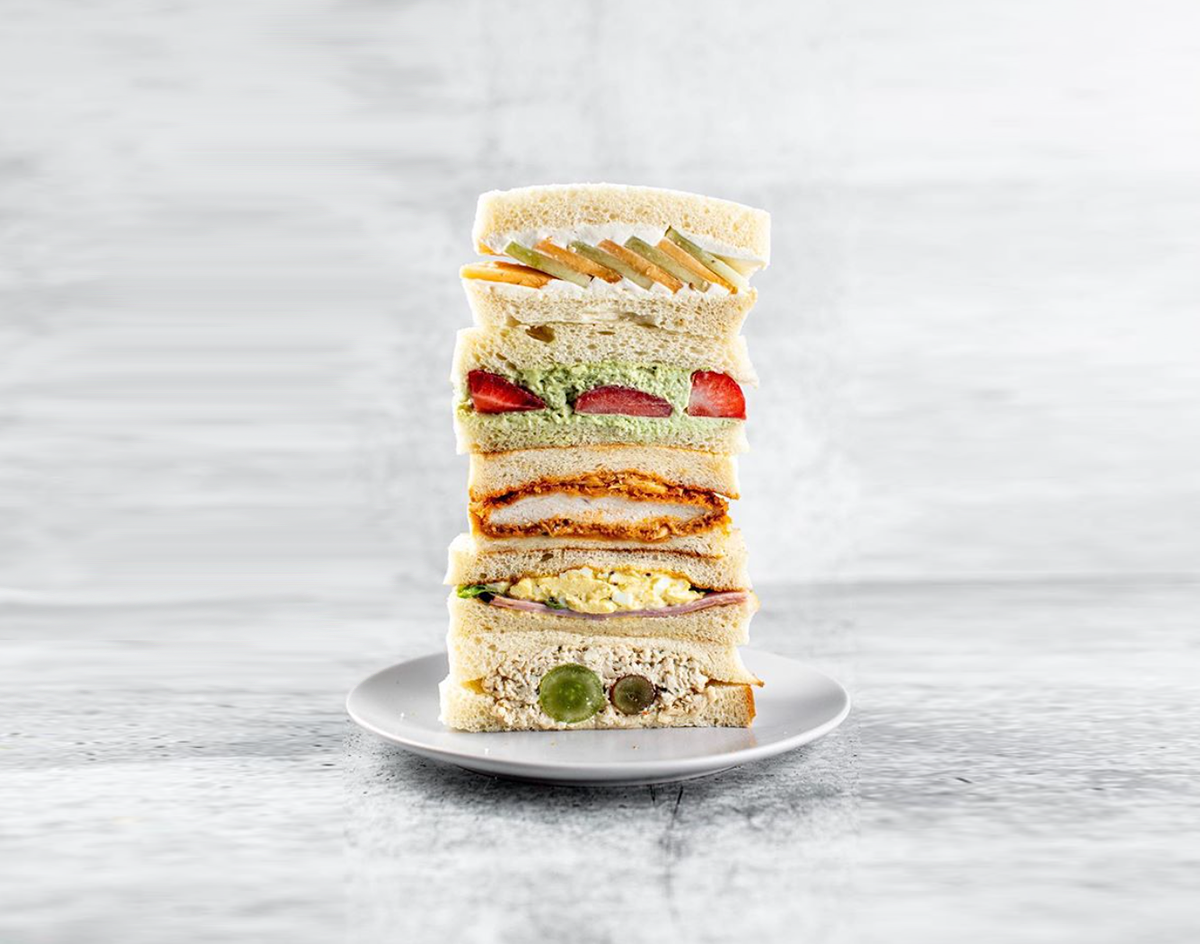 Over the summer, a new Dallas sandwich company called Sandoitchi arrived out of nowhere and started dominating our social media feeds with flashy graphics and eye-grabbing sandwich photos.

The brand caught lightning in a bottle with its rave early reviews, its on-point aesthetics and its retail-inspired (and quick to sell out) pre-order business model. Instantly, had its offerings selling out not like hotcakes, but like the neatly packaged Japanese milk bread sandwiches that they are.

Though still just a few months into its run, Sandoitchi impressively keeps living up to the considerable hype surrounding the brand. After establishing itself as an in-demand pop-up initially based out of the kitchen of Deep Ellum’s Niwa Japanese BBQ, the brand took its offerings to Los Angeles for a spell and quickly earned the praise of supermodel Chrissy Teigen in September.

The guys from sando itchi taught john how to make some of their famous Japanese egg sandwiches. So fluffy 😩🙏🏼🥰 bedside delivery! pic.twitter.com/0PYqEjlfb4

Showing no signs of slowing down, the brand is back in Texas, taking its sandwiches on a tour of the state with pop-up plans in Houston, Fort Worth, Plano and other markets.

No matter where Sandotichi goes, it keeps on selling out of its sandwiches.

We recently spoke with Tran to get a better understanding of just how Sandoitchi has managed to pull this off — and so well. Along the way, Tran also explained how his team’s shared love of Japanese culture, food, fashion and design all combine to make Sandoitchi what it is.

Let’s talk about Japan.
We’ve all traveled to Japan quite extensively. That’s probably all of our favorite places to go. I’ve never been with Stevie [Nguyen], but I’ve been with Angel [Acosta] and Andy [Sirois]. We all gravitated toward the food culture in Japan. Even when you go to 7-Eleven, their 7-Eleven is way crazier than ours in terms of service and cleanliness — but mainly in the food that they offer, and especially sandwiches. The whole wall is full of sandwiches that are pretty to look at — aesthetically pleasing and just packaged really well.

So then when we started developing what we wanted to do, we thought, “Why don’t we try to elevate Japanese sandwiches?” We were talking about this at the end of last year as we were trying to develop what this concept would be. We didn’t have a name, just a product. Then we started looking for brick-and-mortar locations back in January and February, but then March comes and everything shuts down because of COVID.

During quarantine, more people were online than ever. In business terms, it was a particularly exceptional time to utilize social media as a marketing tool. How did Sandoitchi leverage this opportunity?
It’s amazing what social media can do when people are working together. I mentioned to the group that the brick-and-mortar shop wasn’t going to happen any time soon — but, either way, we were like, “Why don’t we just start putting it out there?”

We’re a brand that grew up on Instagram. You can see literally every step from the beginning. In the beginning, we had parked “sando.itchi” as our name on Instagram, and we weren’t sure if that was even going to be the name of it — because it just means “sandwich” in Japanese, and we didn’t want to be like Virgil [Abloh] by blatantly just calling everything what it is, you know what I mean?

How was using social media — especially Instagram — instrumental in Sandoitchi’s initial growth?
In the first week, we had 100 or 200 followers. By the following week, we decided to automate this a little more, and we set up our website. Because of my background in clothing and retail, I thought, “Why don’t we set it up like a launch?” — only because that’s what I know. It wasn’t to build hype; it was literally just logistics.

So, we were like, “Let’s open up it up for pre-order.” That way we knew exactly how much ingredients to buy, and we weren’t just guessing.

Eventually, we got to a point where we were selling out in 15 to 20 minutes.

Recently, you guys have made some pretty big buzz in California — most notably with Chrissy Teigen. What’s up with that?
I’m based in Orange County these days, so we just said, “Let’s bring it to California.” The social media, press and influencer culture out here is just way, way bigger than it is in Texas. We had a ton of foodie people — more than I can name — start to tap in.

Of course, the big one is Chrissy Teigen. It was funny because she was on a Twitter stream saying, “I want a sandwich” — so maybe it was serendipity that she was on this sandwich crave and we happened to be in California at the time.

She reached out to us and it first started off as, “I want to buy a sandwich from you guys!” Then it turned into “Why don’t you come cook for me and John [Legend] and our team?” Then that became, “Y’know what? Let’s do a mini-series where you’re showing John how to make an egg sandwich.”

Um, that’s quite a huge jump!
From that, social media just kept growing, and we came back to Texas. This is our home base. Right now, we’re doing a tour of Texas, and we’re hitting different spots we didn’t hit before — like Plano, Fort Worth and a few other moves planned that I can’t yet confirm yet.

Clearly, your social media reach is very important but just how important are the visual aspects like branding?
Branding is super important! Stevie hates when I say this, but I want to say that the branding is almost as important as the food itself. If food was, like, a 100 as far as importance — like the look and the taste of it– then branding is probably like a 99.

We put a lot of time and thought into [our branding], and we have a really strong team. Angel and Andy are able to come up with very innovative concepts all the time that always stay fresh. I think there is a bit of playfulness and quirkiness to what we do, just because we don’t want to make it too serious.

It seems like the small Sandoitchi team pulls their weight and utilizes their individual strengths collectively in order to make big moves.
We’re all very passionate about what we do, and we all come to the table with different thoughts, angles and perspectives. We take the best ones, roll it all up and move forward. There’s no ego or pride in what we do; no one cares to have credit. It’s always what’s best for the brand.

Our advantage is that we do everything in-house from our social media to our packaging. Everything is done between us four. We don’t hire an outside consulting or PR company, so we’re very in tune with the engagement and the responses we get.

You may have a big company with a great product and a great PR team, but there’s still a bridge there that has to be crossed between the marketing and the product. Things can get lost from one person to the next. In our case, we may look like a big team, but we still operate very small.

The concept of “pre-orders” is something that is very normalized in the visual and fashion world, but you guys managed to bring such a concept to the ever-shifting modern food world — and it all started with a sandwich!
There’s that saying: innovation from necessity. That’s exactly what that is. We were trying to create something that would work because of what was happening in the world. From that, we look like the most innovative people — but, really, it was because we were trying to figure out a solution in the face of a problem.

Without purposefully forcing it, I think we check all the boxes as to why it pops on social media: It’s a great sandwich, it looks good in pictures, it’s aesthetically pleasing, it’s small.

It’s the perfect pick-up food. You can eat it with just your hands. It makes sense. The only thing I can think of that comes close to that is a Hot Pocket.

Well, they’re definitely not selling out of Hot Pockets in 15 minutes. Speaking of sold-out sandwiches: Which Sandoitchi sandwich is your favorite?
My personal favorite is the egg sandwich because that was the one that started everything. Stevie made a test item and sent me a picture, and I made my own in California. We were sitting there eating it and were like, “This is cool. I think we have a  business.”

The egg sandwich, to me, is the cornerstone of what we do. It also happened to be the one Chrissy Teigen wanted to show her fans. I think it’s the most relatable. Most people have their own egg salad recipe or you have all the ingredients in your fridge. It’s accessible and it’s relatable.

Real quick, I want to pivot back to your unique background. Do you have inspirations outside of food that you want to give your flowers to?
Coming from my background, which is rooted in fashion, I’ve always looked up to Japanese designers. Maybe it’s the world that I was a part of, which is that you go to a lot of of fashion shows and runways and it relies heavily on celebrity culture. I would never freak out if I saw Beyoncé, Kanye West or Pharrell; I would give them props, but it wouldn’t change my life or anything.

The people I do freak out about would be Hiroshi Fujiwara, Nigo and Jun Takahashi. Those are the people I really look up to, just because of the ethos they’ve always brought to their work, which is never based on a trend, but based on what’s true to them.

When these brands first started out, they weren’t the big brands they are now. They just stuck with it for so long and made it. They were the people that brought Japanese fashion to the forefront, and it’s just coincidental that we, as Sandoitchi, pivoted into Japanese food.

Japanese brands have always been my favorite.

From art to fashion to food, clearly, Japan always takes it — whatever it is — and turns it upside its head.
Japanese people do not fake the funk! If you’ve ever been to Japan or you’re familiar with it, normal people off the street — not fashion designers, not students, not models — when they walk down the street, they’re completely put together. They’re fully committed to what they’re going for.

That’s a serious commitment to the aesthetic — even American ones!
There are designers that fully commit themselves to what they do. We talk a lot amongst ourselves about how Japan definitely looks up to American culture and praises it, but turns it around and does it better than we do it — better than anyone else can, really.

They can take normal blue jeans that we throw away, bring them to Japan, make them super cool and elevate them, then start their own denim company. They’re not just sewing jeans, they’re buying the looms that the original jeans they brought over are made from that have been discontinued in North Carolina — and then they learn how to make the American jeans the old way, you know what I mean?

I think there is something we can all learn from our friends in Japan when it comes to visuals, innovation and style.
I think that this is in some small way Sandoitchi’s ode to that. Japan has taken American things and flipped them, and made them better.

This is our little piece of taking something that we love from Japan, doing it our way and putting it back out in the world.