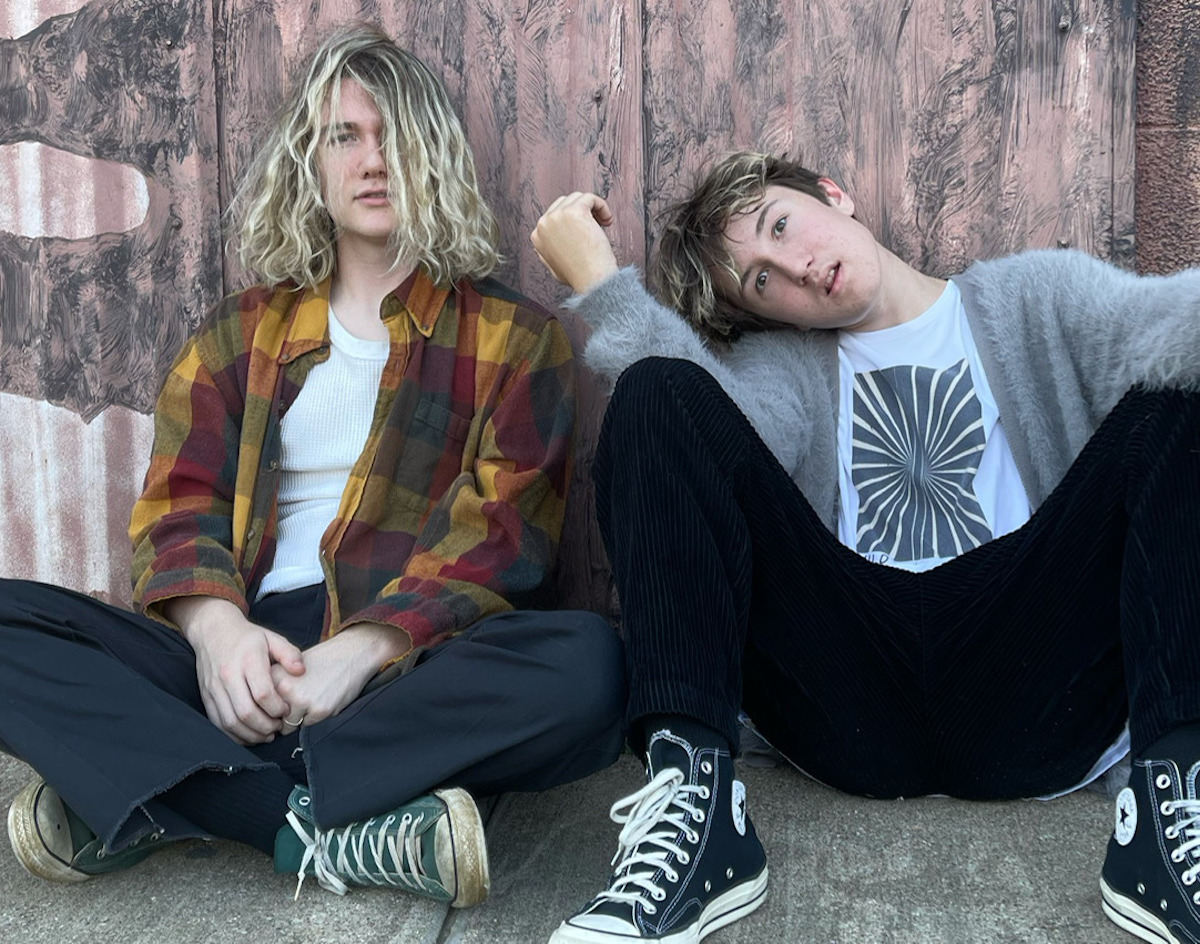 We Check In With The Brothers Behind Olive Vox And Ask About Their Upbringing, Musical Influences, TikTok And What’s On The Horizon.

We really admire what Olive Vox does as a band, and their unique story so far. And yes, Parker James has a big following on TikTok, but more on that later. Let’s focus on Olive Vox’s garagey blues/punk first. They put out their debut single last year called “Bury Me Low,” and they’re prepping a five-song EP to be released next month.

Parker and his little brother Caden Shea moved to Mansfield after growing up in California. Without having access to the kinds of electronics kids their age had, they had to use their imagination and create. And playing in a band together is a part of that.

Originally named Hoof, they decided to go with the goofy name of Olive Vox and it’s stuck. Their inspired cover of Ty Segall’s “Finger” caught a nice buzz last year, and the band hopes to grow and grow.

We caught up with Parker and Caden earlier this week to see how they’re doing, their upbringing, being really popular on social media, how their sound came to be and what to expect this year.

Parker, are you just getting over COVID?

How bad was it for you all?

Parker: Oh, not that bad. I mean, we both felt like we had a little cold. I got a sinus infection. Other than that, we were chilling.

Could you pinpoint how you got it? When I got it for Christmas 2020, it was from either a veterinary clinic, a gym or a gas station.

Parker: We played a show at Three Links and the band that went on at the very end, I thought it was kind of weird [how] the bassist and drummer were acting. They were acting like, “Don’t get near me” and they were also masked up. It’s not out of the ordinary to see musicians play with masks on, but the added-on behavior was a little sketchy.

Right after that show, my bassist and drummer got COVID, along with their families. But I think what me and Caden got it from was a New Year’s party. We walked in and there were a lot more people than expected. I thought to myself, “Oh my god, I better not get COVID from this.” And then a couple of days later I got COVID.

How did you end up going from living in California to living in Mansfield? Was it a job change for your parents? What happened?

Parker: My dad had a job out in California [where] he painted planes. Then he got an opportunity in Texas. It was getting expensive out there, so we moved. First year of living here, our parents rented a house and the second year [they] bought a house.

Have you guys always been in the Mansfield area since moving here?

It’s still weird to me how territorial people are about where things are, as someone who was born in New Orleans and spent the rest of my childhood in Houston.

Parker: We say Dallas because it has a better ring to it. It’s better than, “Olive Vox, the Mansfield band.” Everybody’s going to be like, “What the heck is that?”

Caden: No one knows what the heck Mansfield is . . .

Parker: We’re like 15 minutes away from Fort Worth, but from an outside perspective, even though it is called “Dallas/Fort Worth area,” no one really knows what the heck Fort Worth is unless you’re from Texas.

Why were you guys not allowed to have electronics growing up?

Parker: We were, but we couldn’t really afford them. My grandparents had an iPad, but did I use it? Heck no. I remember I begged my mom for a phone when I was nine. Didn’t need one then, but she bought one and she used it for a phone. Then she trashed it at Sea World because she got splashed by Shamu and it got wet. We used our imagination more than a phone.

Caden: I remember when my mom finally did get an iPhone, it was the craziest thing ever. But we couldn’t just really get a chance to grow up with it. We were too busy. My dad ran his own business and then in 2008, our whole family lost everything. We couldn’t go out and buy phones and stuff. After school, we would go over to our grandparents’ house and we would hang out and play in their backyard. In my opinion, we didn’t need phones when we had our imaginations.

When it comes to music, who are bands that directly influence Olive Vox’s sound, but you don’t really sound like?

Parker: Well, I listened to a lot of Ty Segall for a long while. That’s definitely a big influence. Obviously Nirvana. Cage the Elephant – massive influence. I listened to them for 10 years of my life. I like this band called Basement. They’re like an emo band.

Caden: As for me, Nirvana of course. Stuff that influences me but doesn’t correlate to our sound: I like Duster a lot. Teen Suicide. I really like Nine Inch Nails a lot.

With the band’s association with Parker being on TikTok, it would be easy to think you should play pop to get really popular, but I’ve taken it as, you guys are playing what you actually want to play.

Caden: Exactly. We don’t want to be, like Parker to be a TikTokker and just [be like] “Well, I got TikTok, I might just start up music and get all these people to write my stuff.” We genuinely like music. Parker just blew up on TikTok. We were musicians before TikTok, but it’s also a good tool because we can use that for promotion.

I’ll sound like the old guy: there are people who are really popular on TikTok, but that doesn’t always equate to being popular on other social media platforms. What is your insight into why that is?

Parker: I don’t know. On TikTok, I’ve seen different people blow up. Every app has its own algorithm. Me on TikTok, I have almost nine million [followers], but on YouTube, I’m just getting around to 100,000 [subscribers]. Simply because it’s a different platform. You still have to build your crowd, but every app is different. It takes a little more effort than some. It really depends on what app you’re talking about.

Caden: We don’t want to skimp on our music. We don’t want to hire anyone to write our stuff. I think it would be a cop-out. Really put our minds to it full force and make the best music we can.

Do you hope to tour?

Parker: We just went on tour. We played Chicago, New York, Fairfield, CT, Columbus, LA. All that good stuff. It was really cool.

It’s important to get out of town and see how you are in other places. Daniel Fried from Mind Spiders/Radioactivity/TV’s Daniel told me this once: You can be a good local band, but if you want to be a great band, you have to go out on tour.

Parker: Exactly! Oh my god. There are bands that have been stuck here for years, and they’re totally fine with it. I’m like, “Why the heck?” Playing the same clubs to the same people. You don’t grow and everything dies out. You’re going to be that guy who’s like 50 saying, “I was in a band once.” All sad and stuff. When Olive Vox started, I told Caden we can’t be just a local band. We have to be an international band.

Lastly, have you ever heard anything back from Ty Segall about your cover of “Finger”?

Caden: No, we never got any feedback from it. We were in the studio and we had a little more time left, so we decided to cover it because we really liked it. We never contacted him. Hopefully he’ll hear it.

Parker: He walked by me when we played Levitation in Austin. I said, “Hey man.” He said, “Yup?” And that was it. It was a weird reaction.