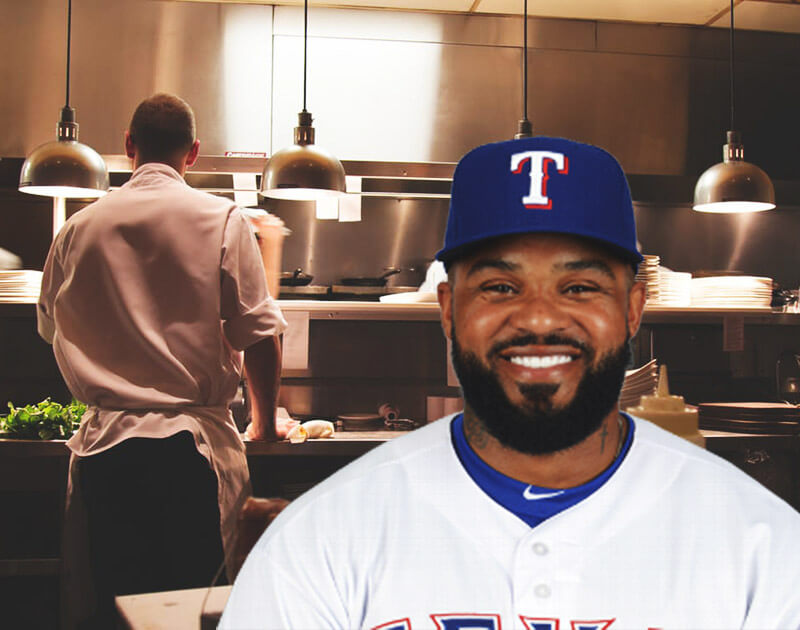 When Prince Fielder officially announcement his retirement during this past MLB season, it was a legit sad moment — mostly because it wasn’t the affable slugger’s call. After two spinal fusion surgeries in three years, doctors came to that determination for him, telling him he was no longer physically capable of playing the game that’s literally part of his bloodline.

But what came as a sad reveal ended up being a fairly heartening one, as Fielder remained on the bench with Your Texas Rangers, providing emotional support for the team from the dugout as it attempted to do some damage in the Second Season.

Now, though, the whole story’s got itself an even happier ending as Fielder’s determined what his post-retirement career is going to look like — and it’s a bit of a shocker. Fielder, in an interview posted to ESPN today, announced that, in addition to coping with life after baseball, he’s also been working on a cooking competition show for Netflix and Hulu.

Called Fielder’s Choice, the show will find the former ballplayer hosting, in his own words, “a mixture of baseball people, actors, musicians, chefs and whatnot. They bring out different dishes, and at the end of the show, I give the one I like the most the ‘Fielder’s Choice.’ It’s good TV.”

The idea came about, Fielder continues, when he and a friend of his were going over his finances and the idea of what Fielder wanted to do next with his life came up. Simply, Fielder said, “I always wanted to do a food show.” And, just like that, he got one.

There was almost certainly more to it than that, granted. Still: Must be nice!

That said, this is a cool indicator of what to expect from Fielder’s Choice: When asked in the interview what cooking shows he enjoys, Fielder lists Action Bronson’s Vice show F*ck, That’s Delicious as an influence. He also name-drops actor Chazz Palminteri, rapper Xzibit and pitcher CC Sabathia as confirmed guests.

So that’s something to keep an eye out for around March or so, which is around when Fielder says his show is set to be released.