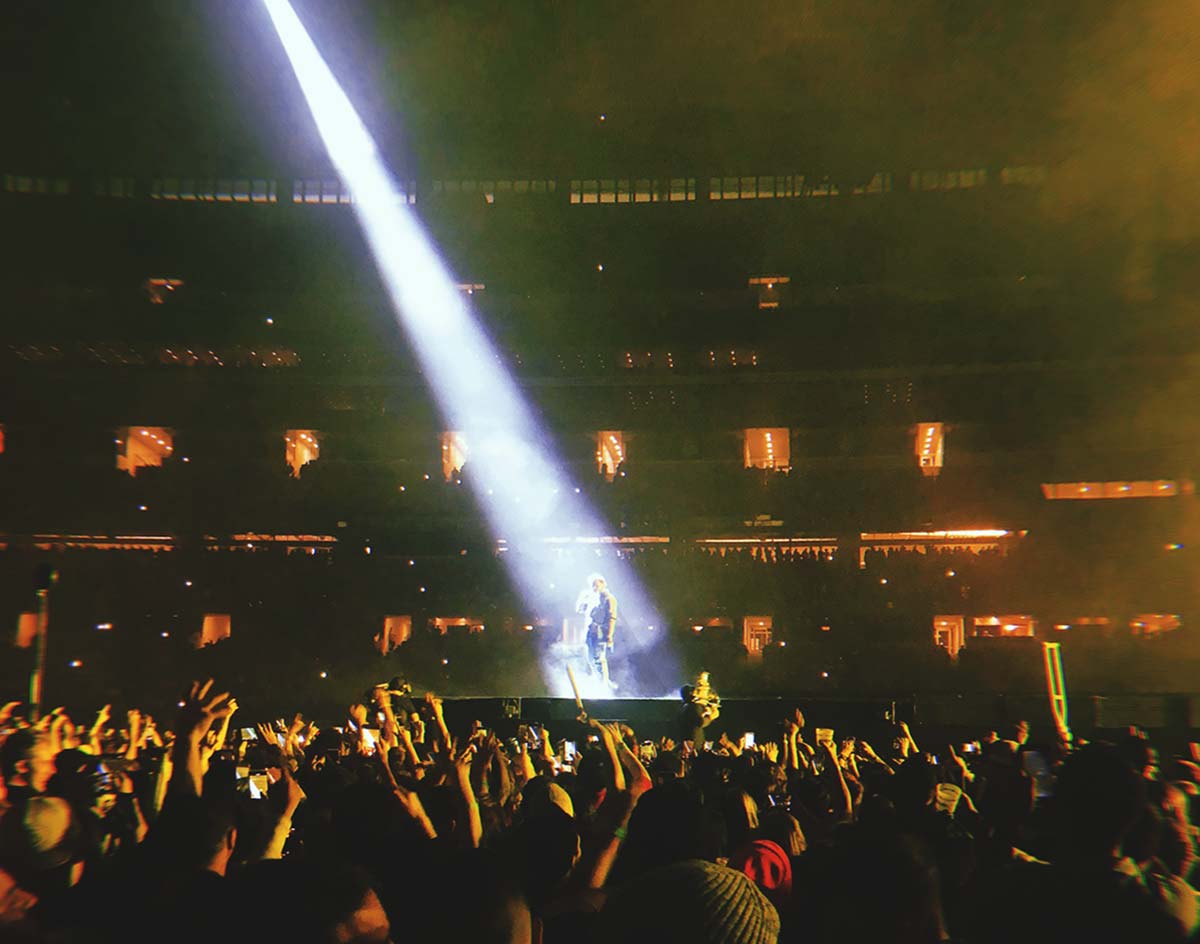 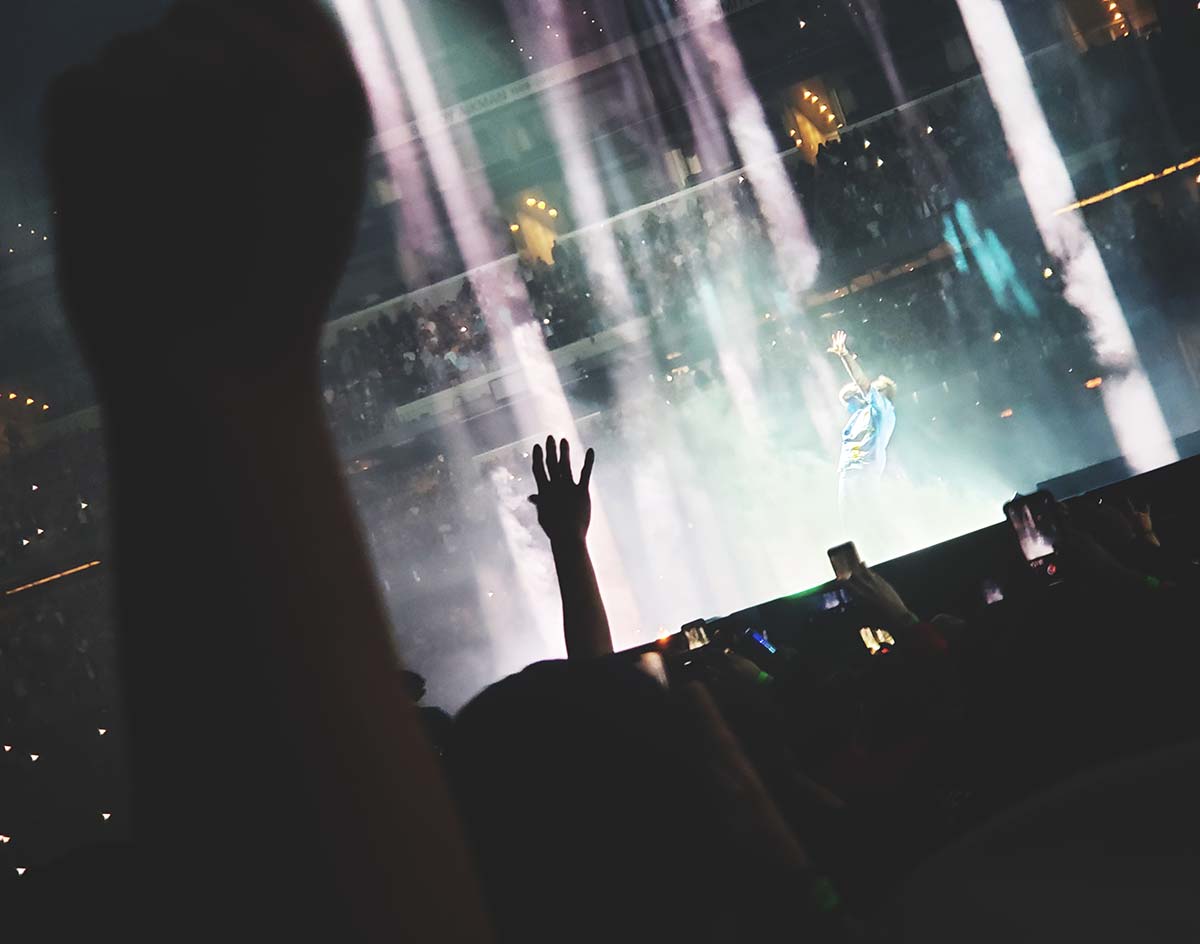 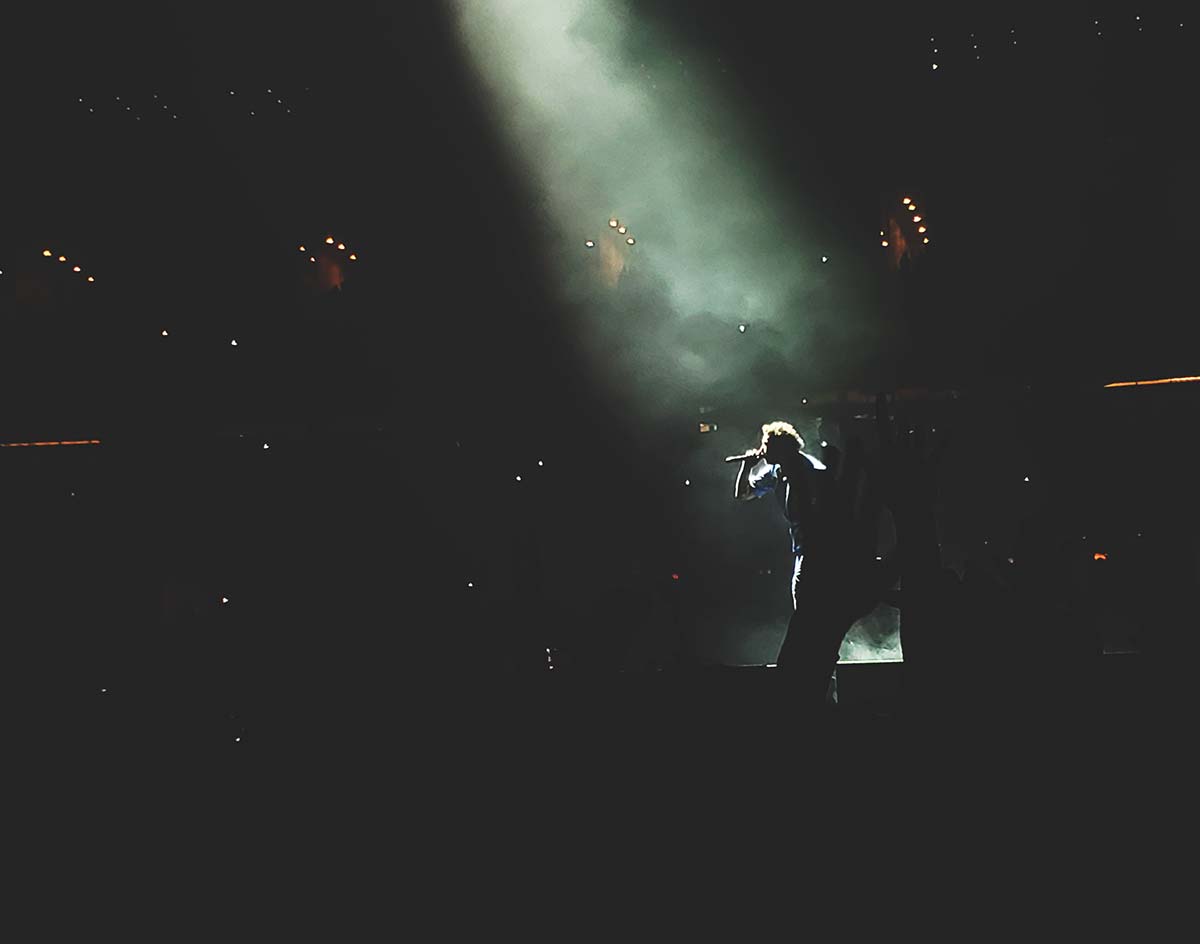 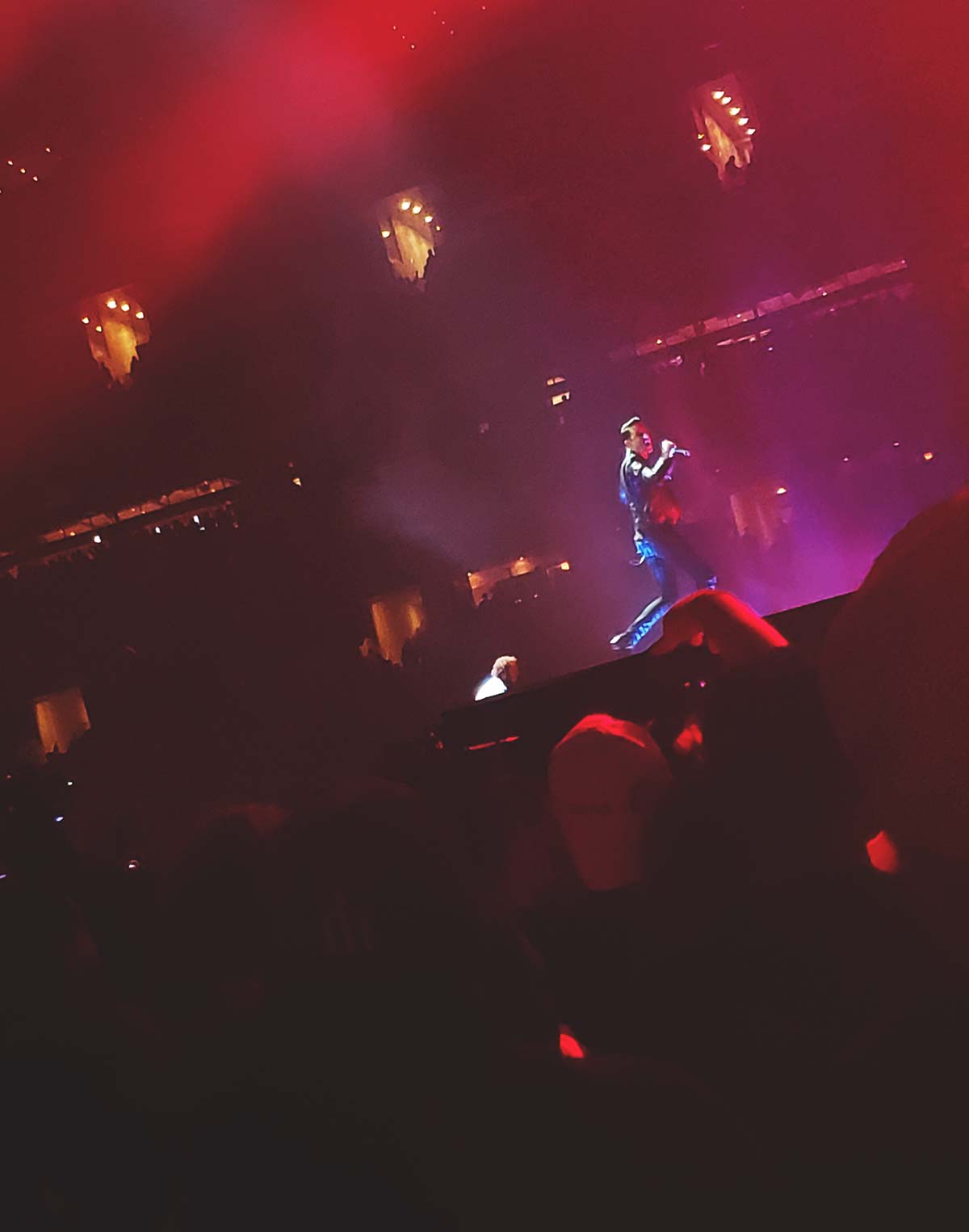 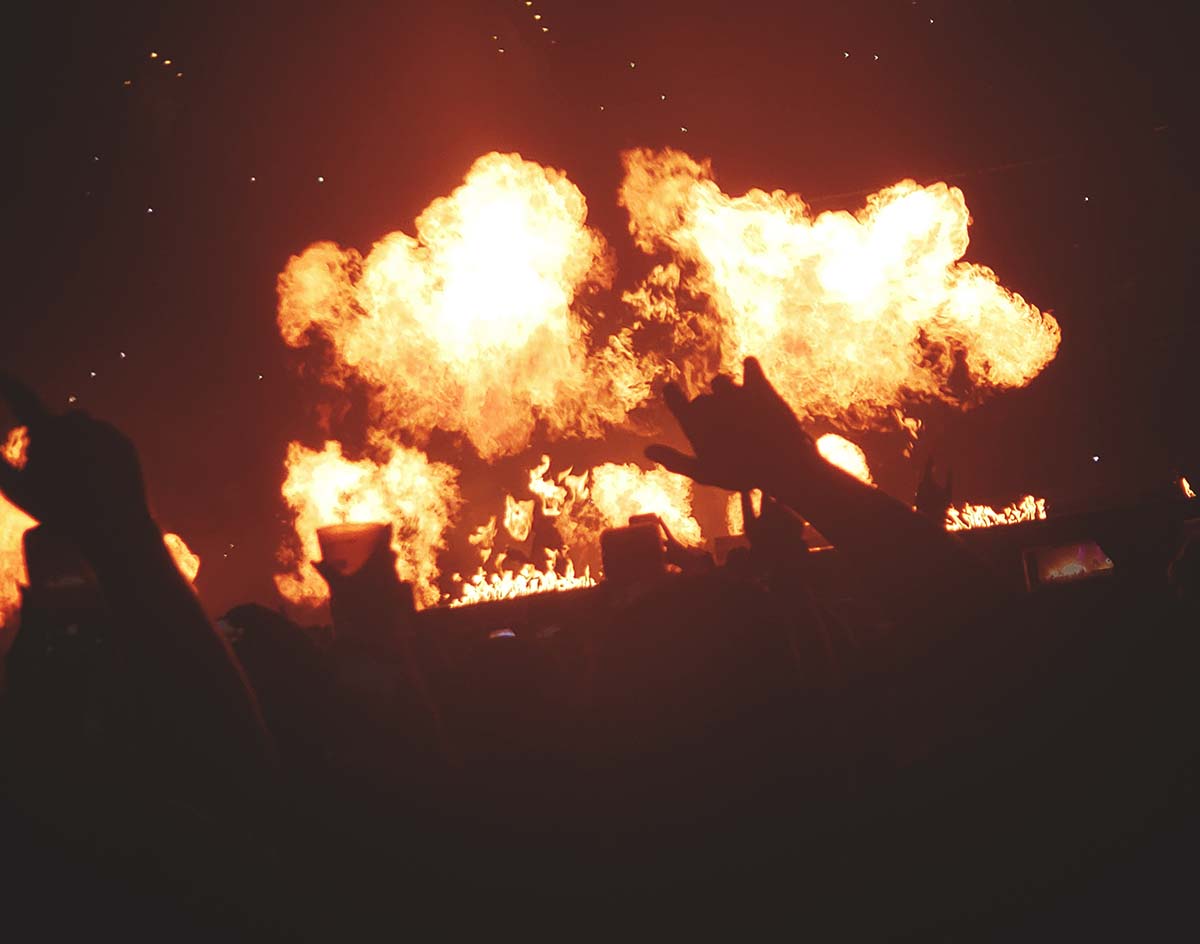 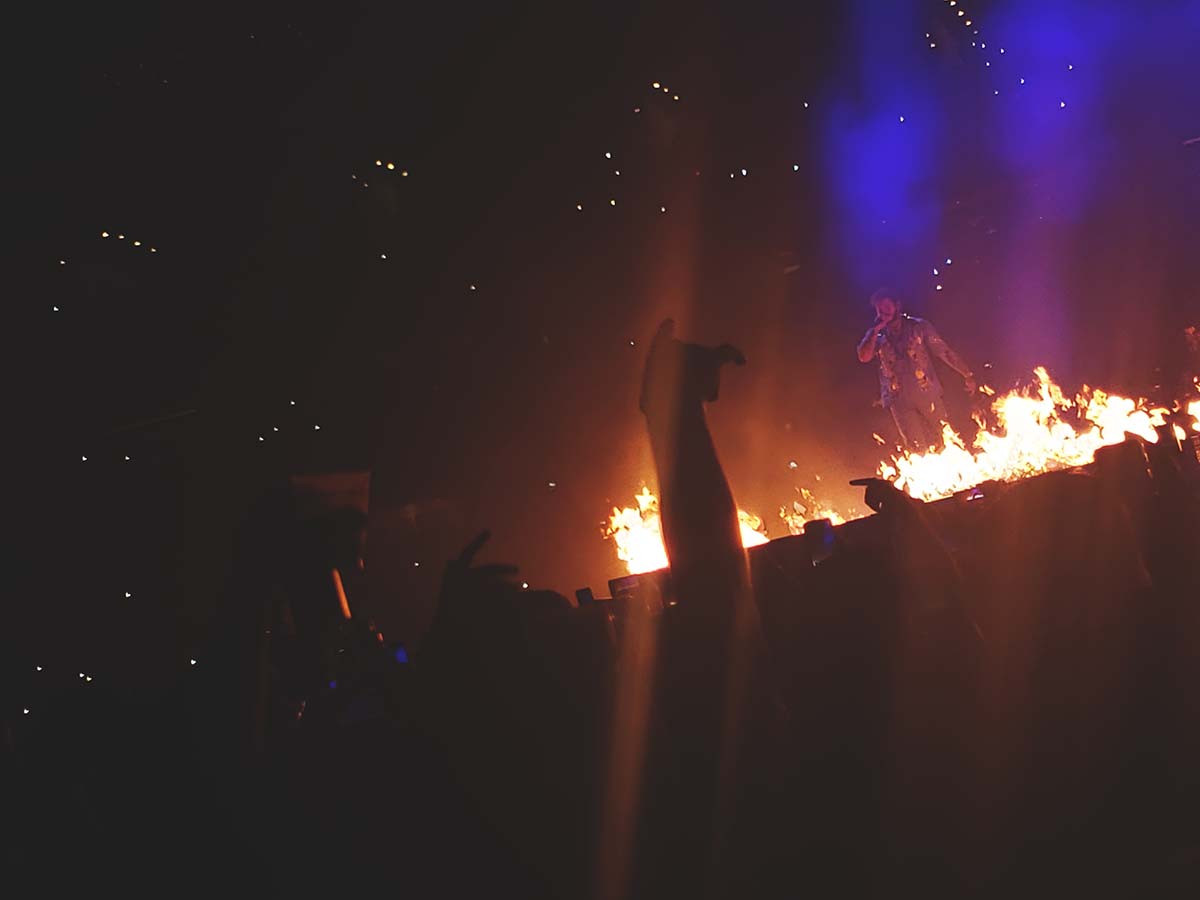 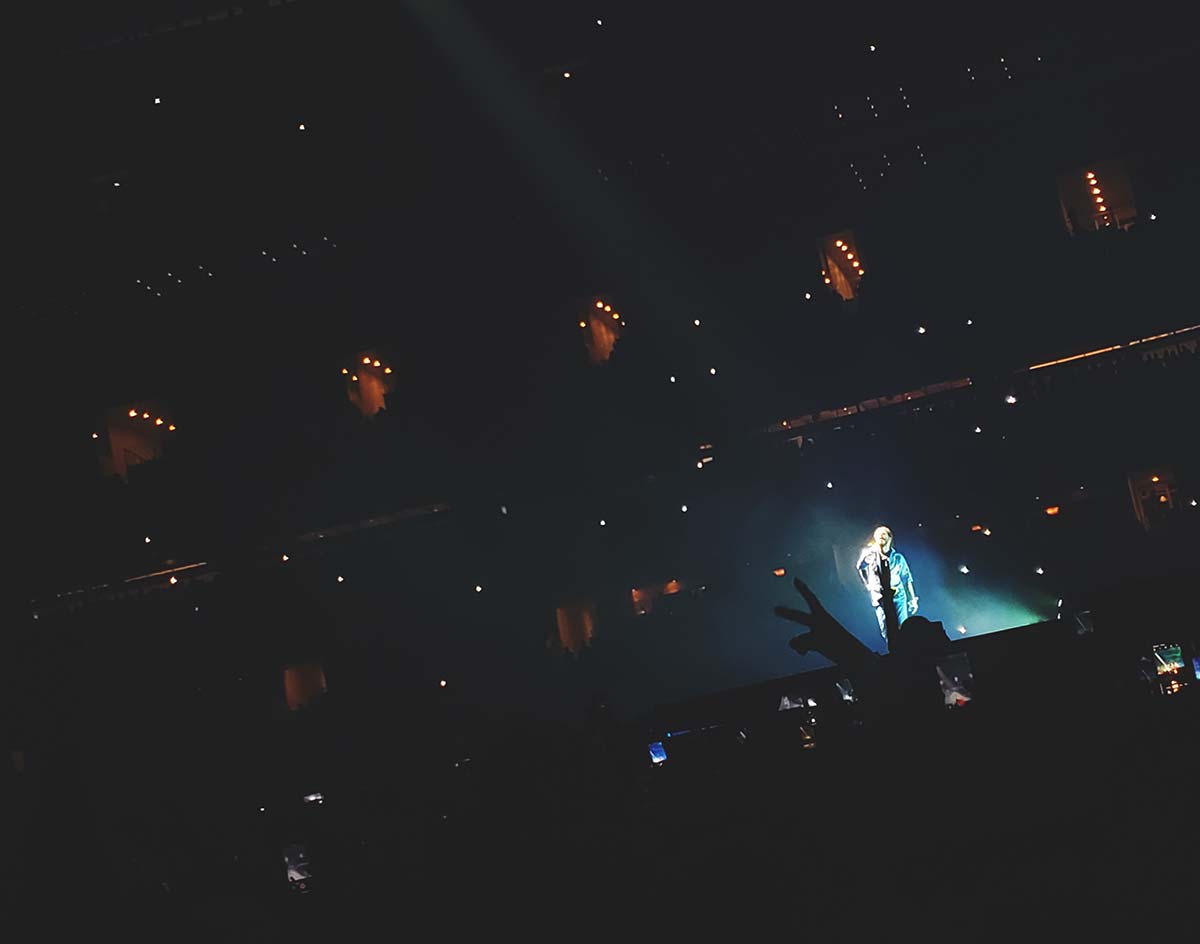 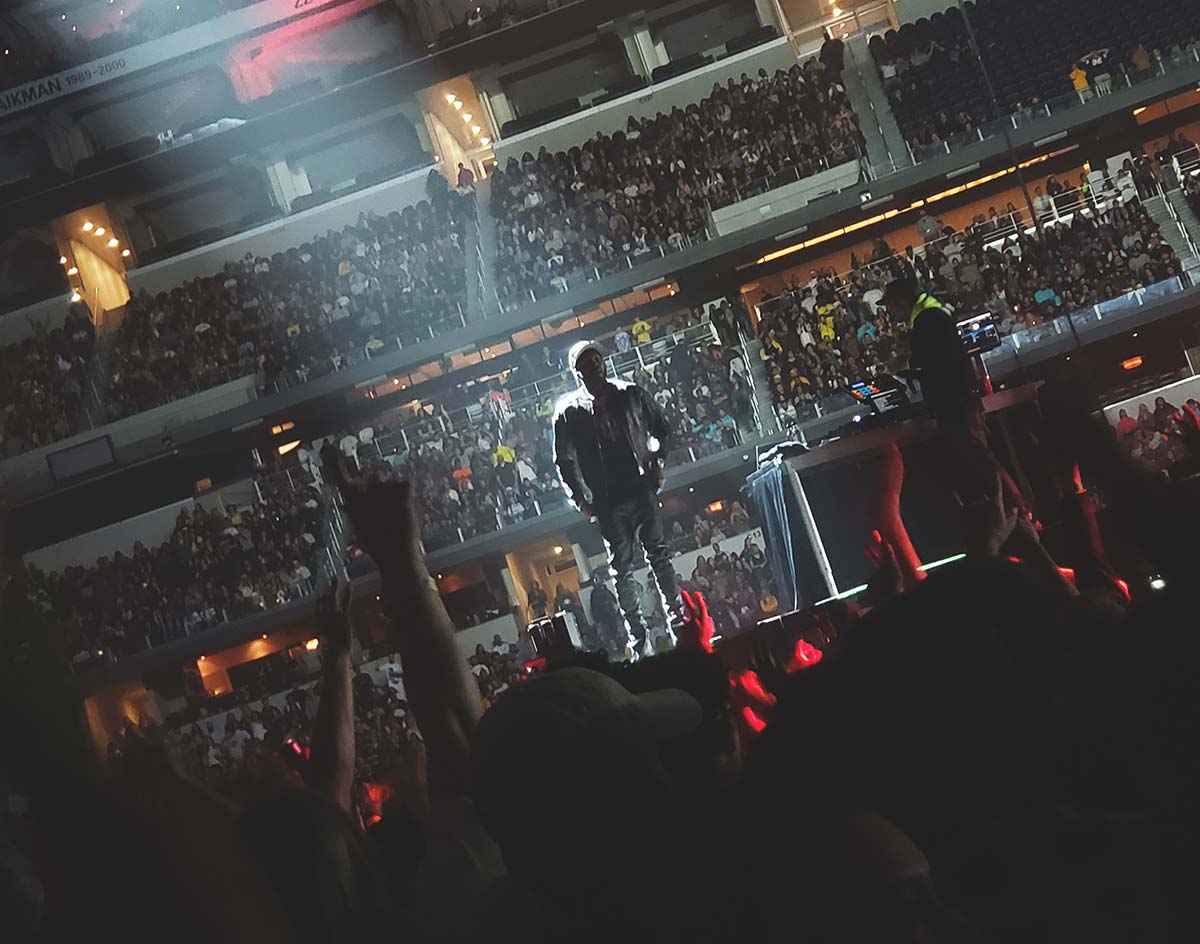 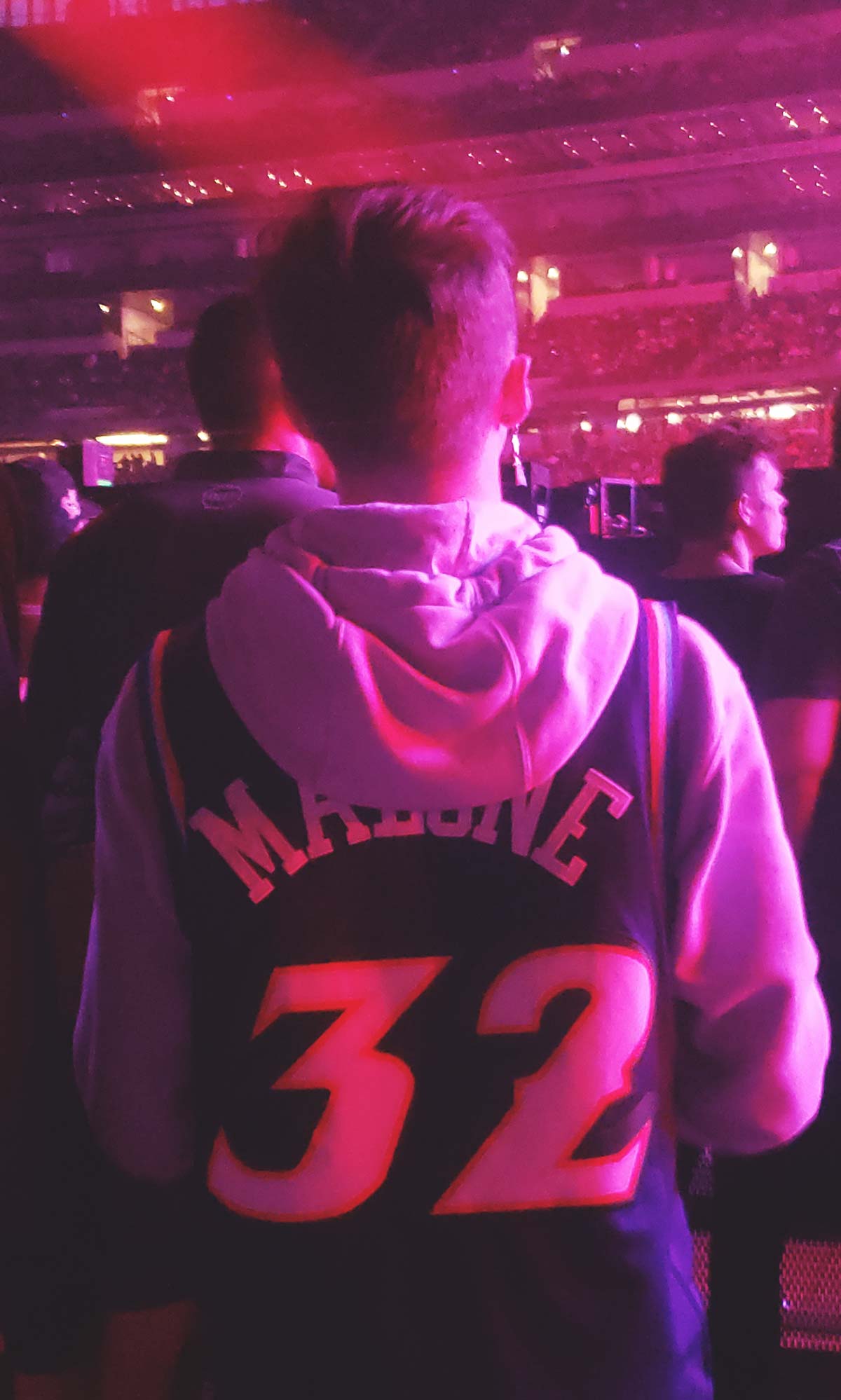 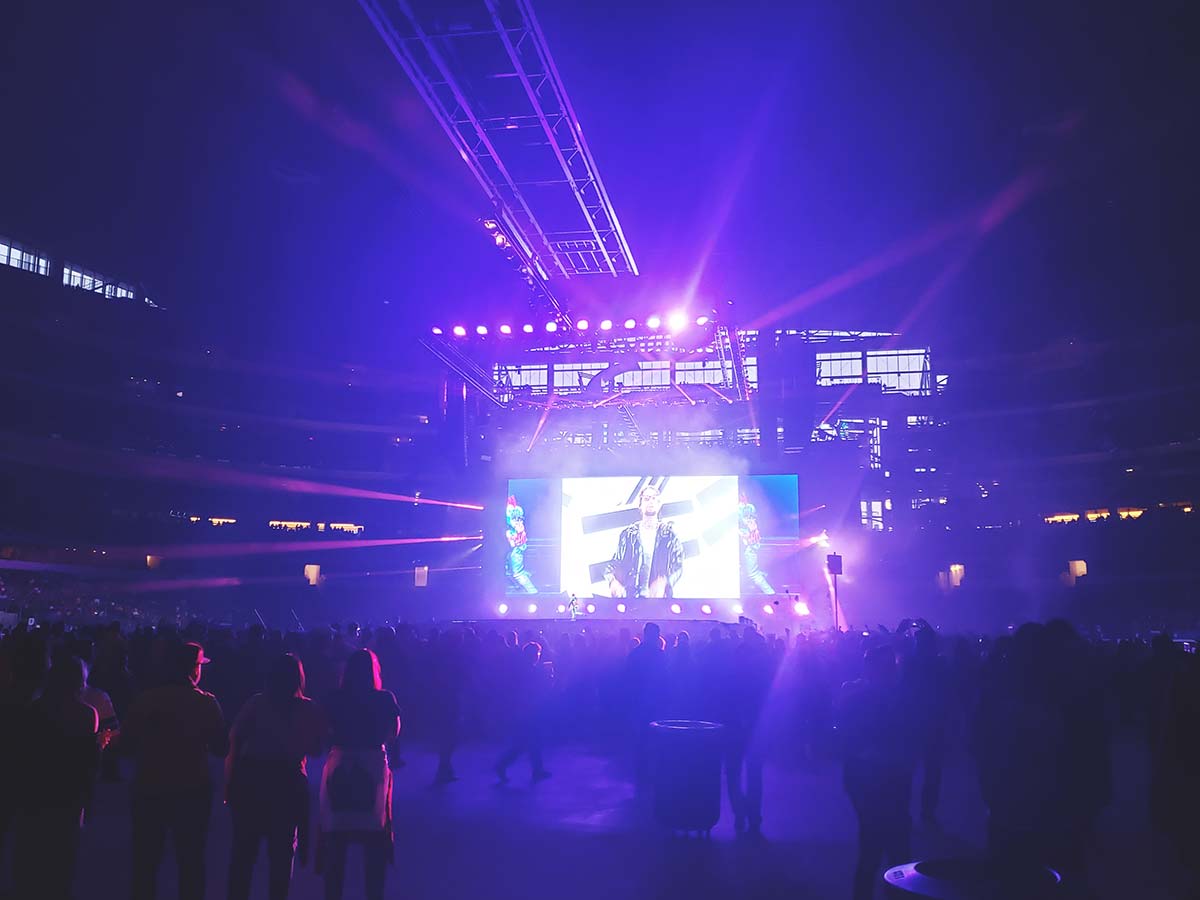 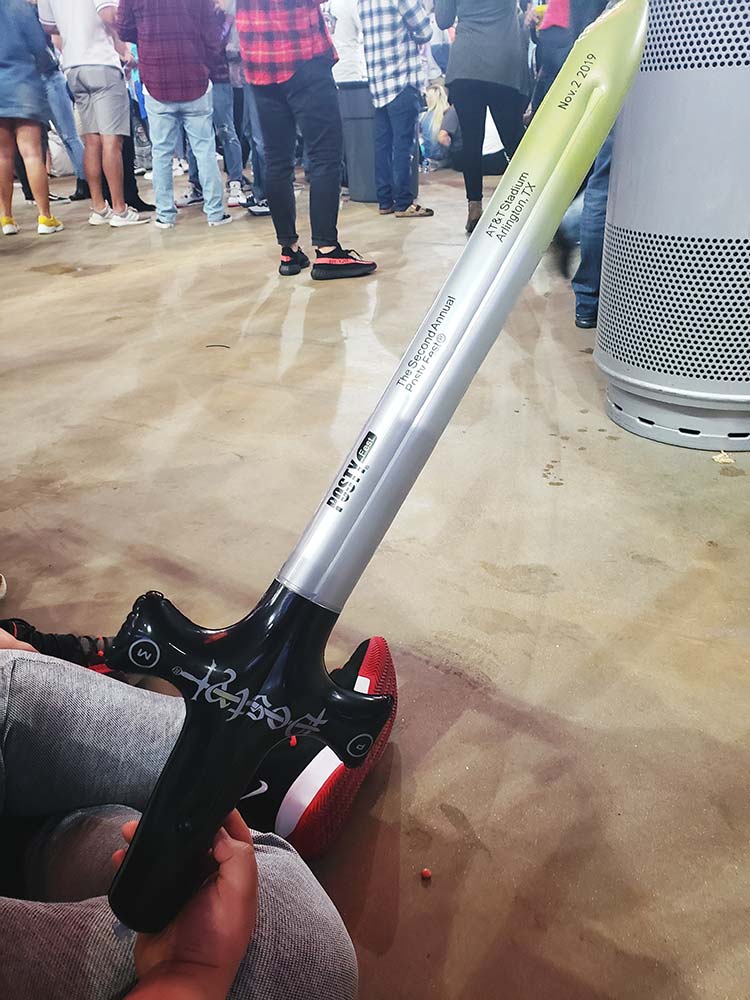 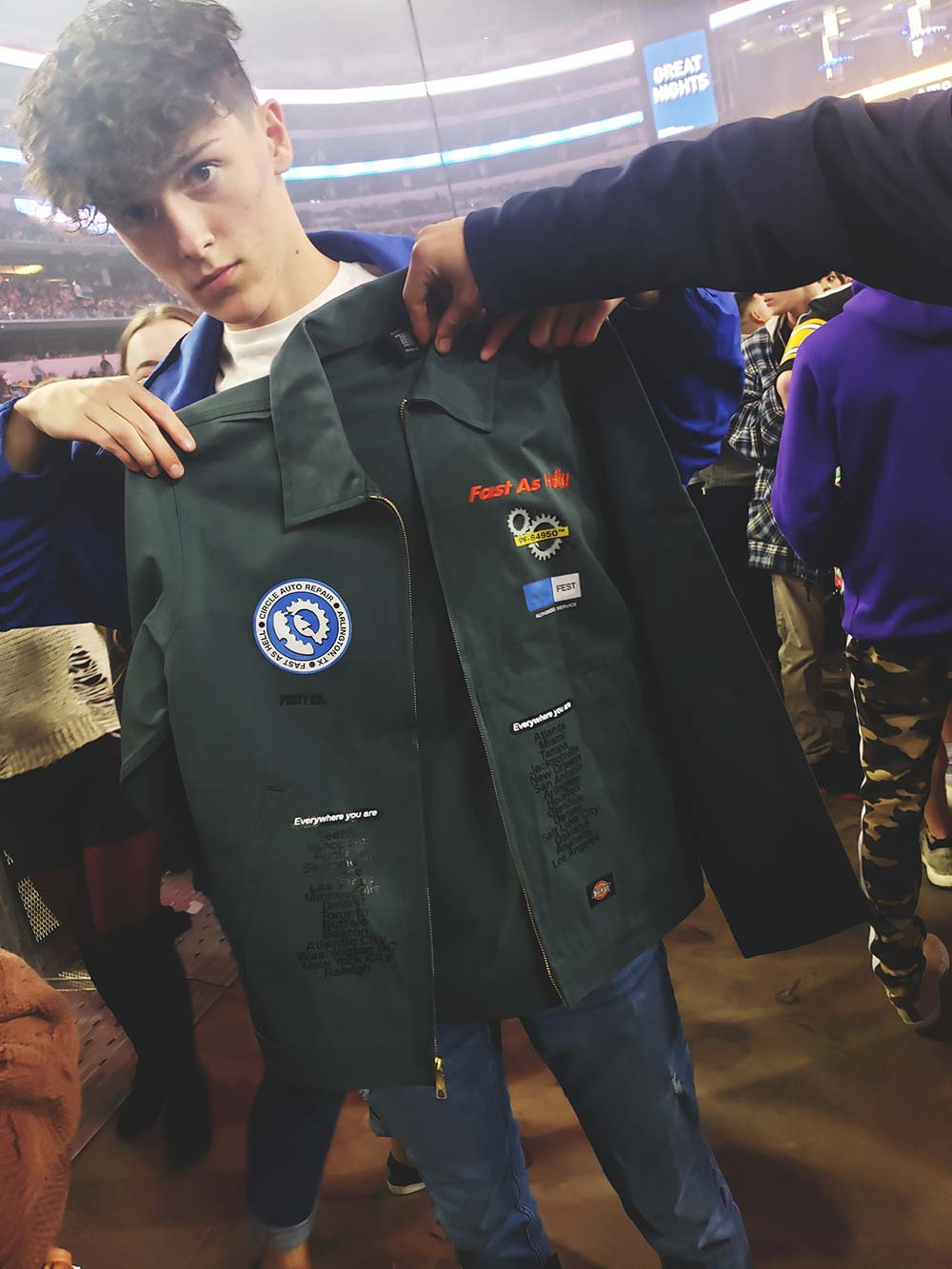 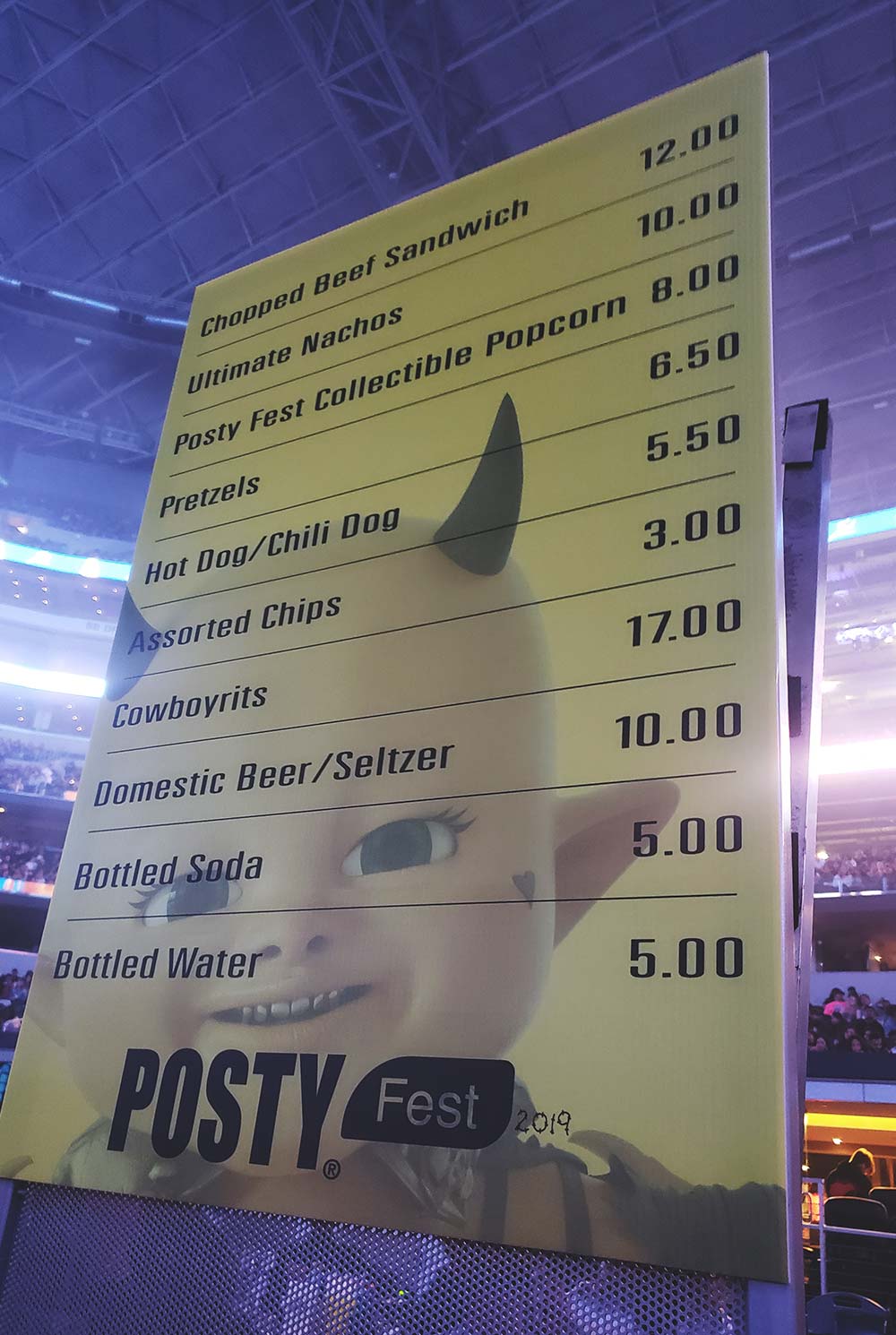 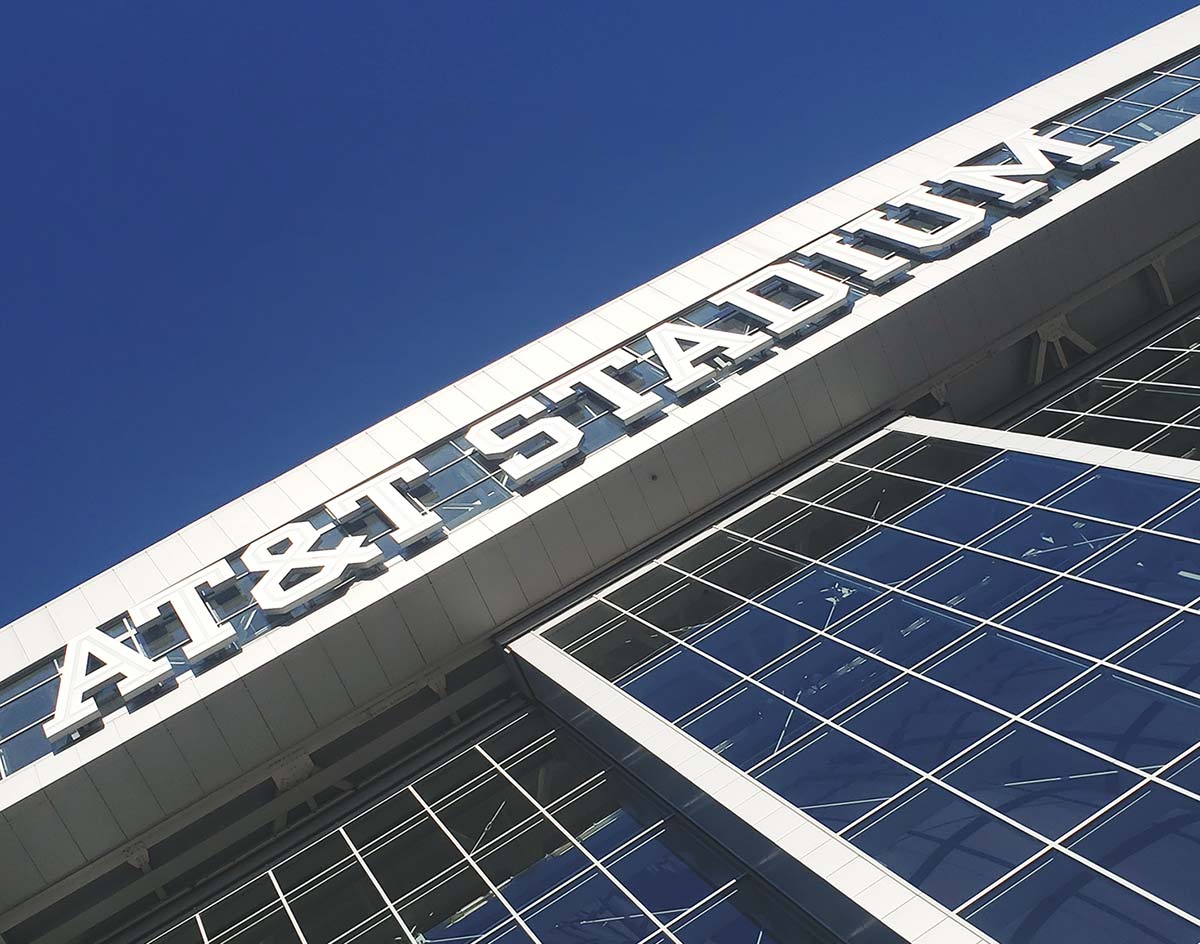 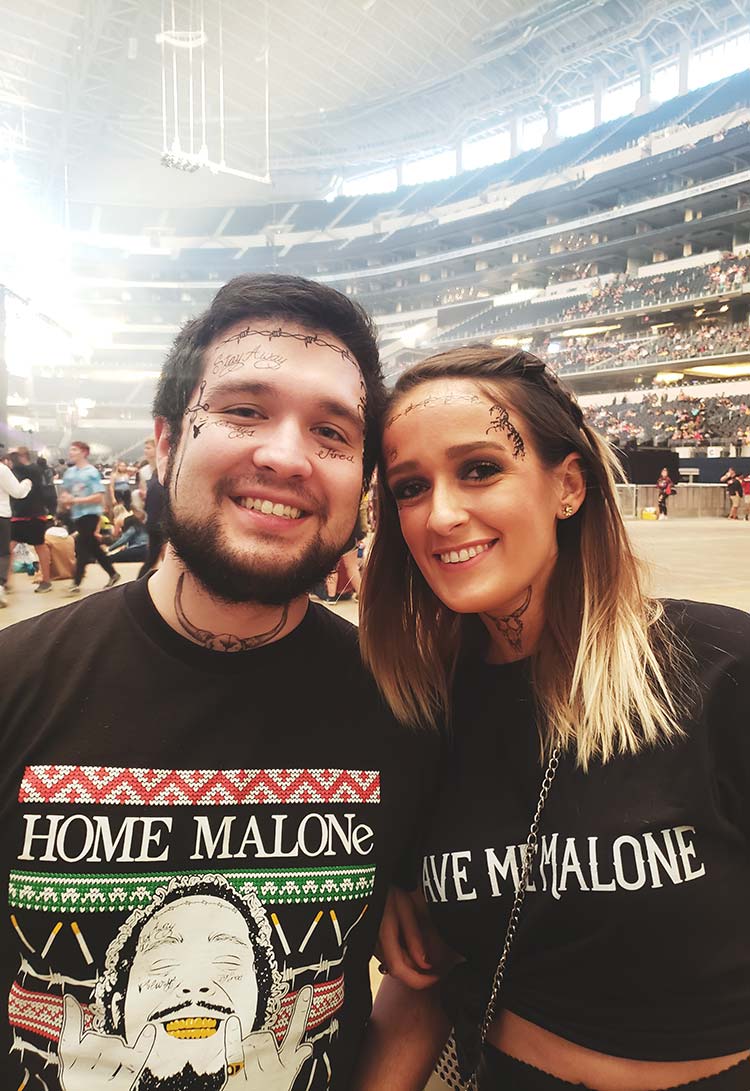 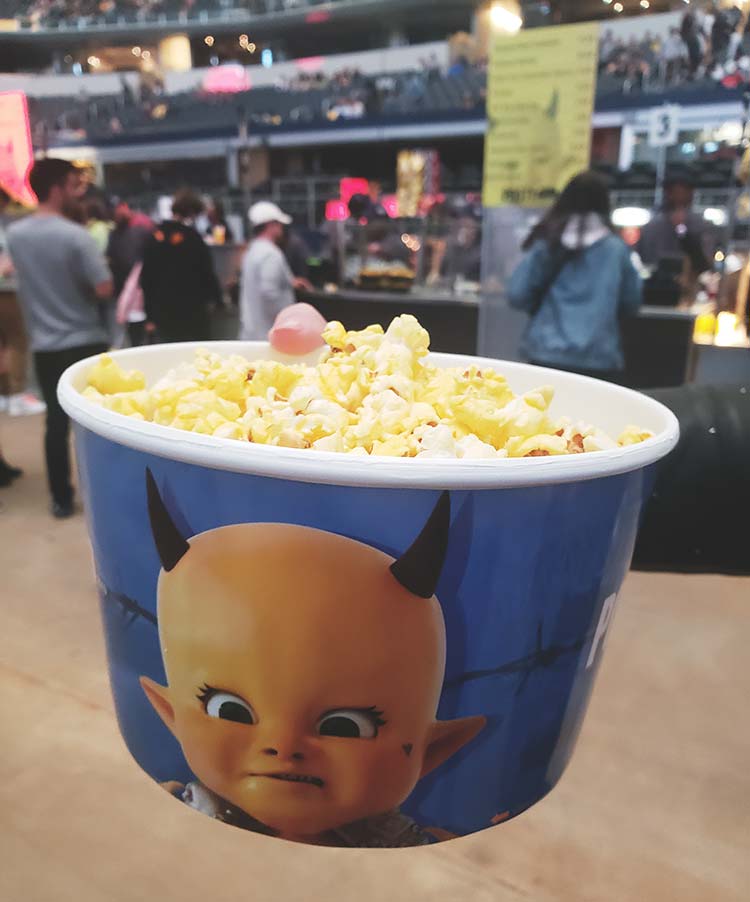 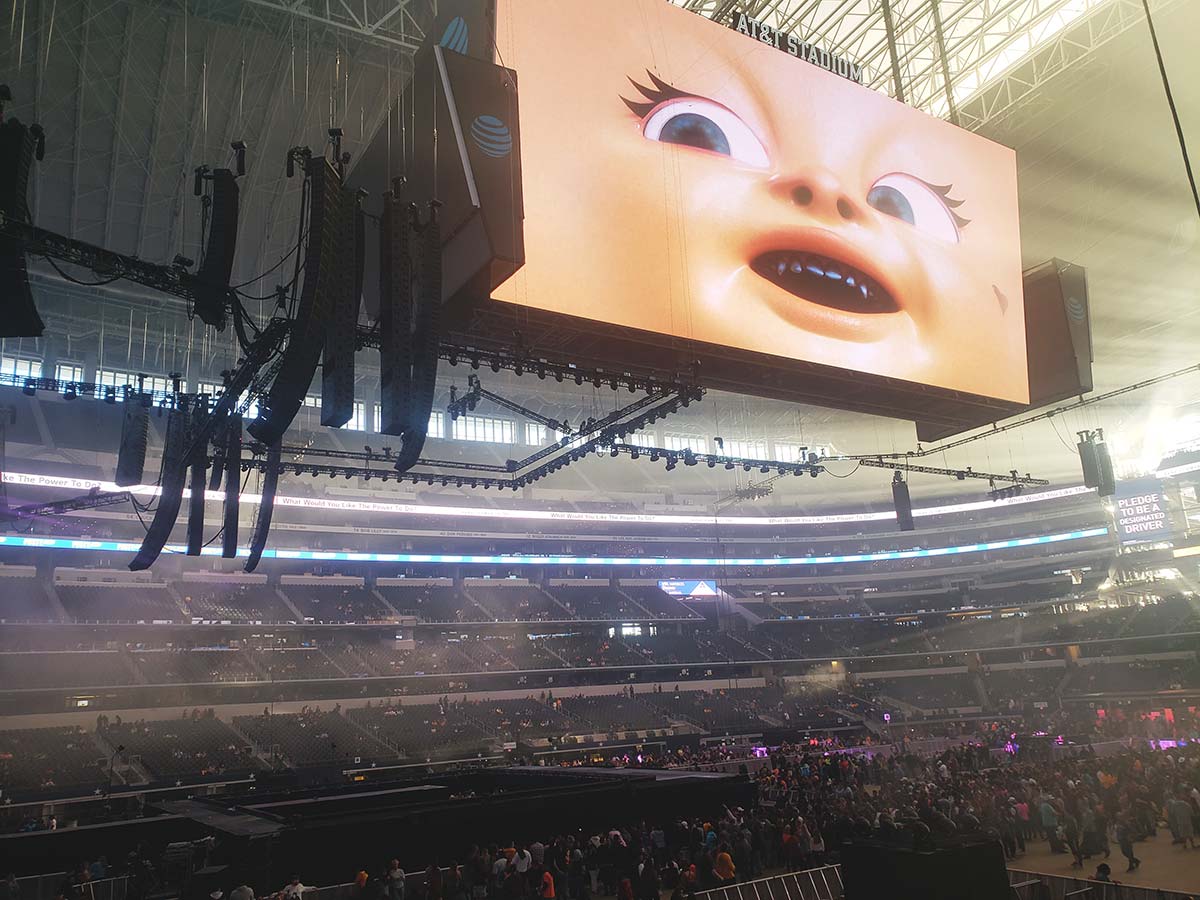 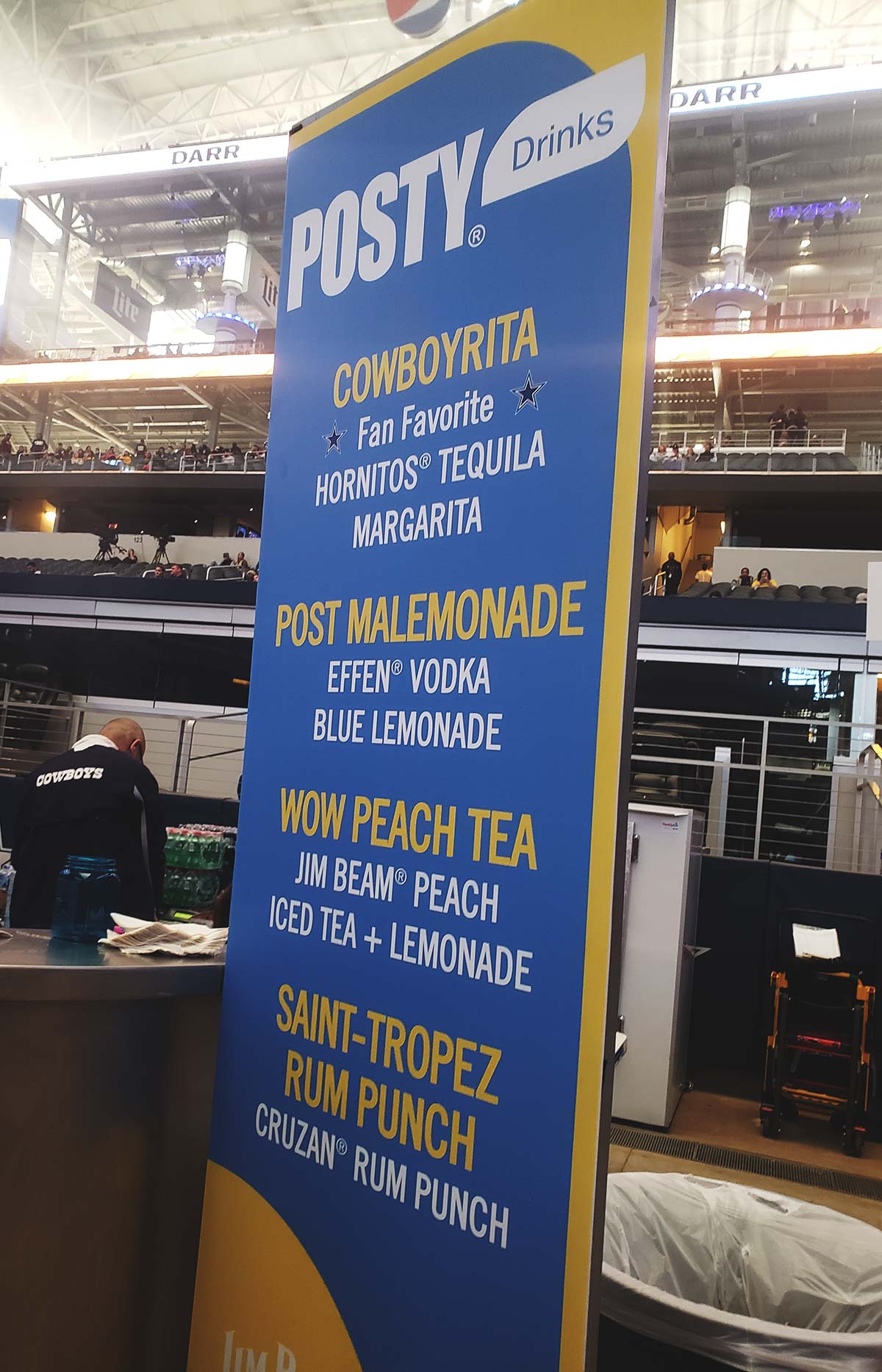 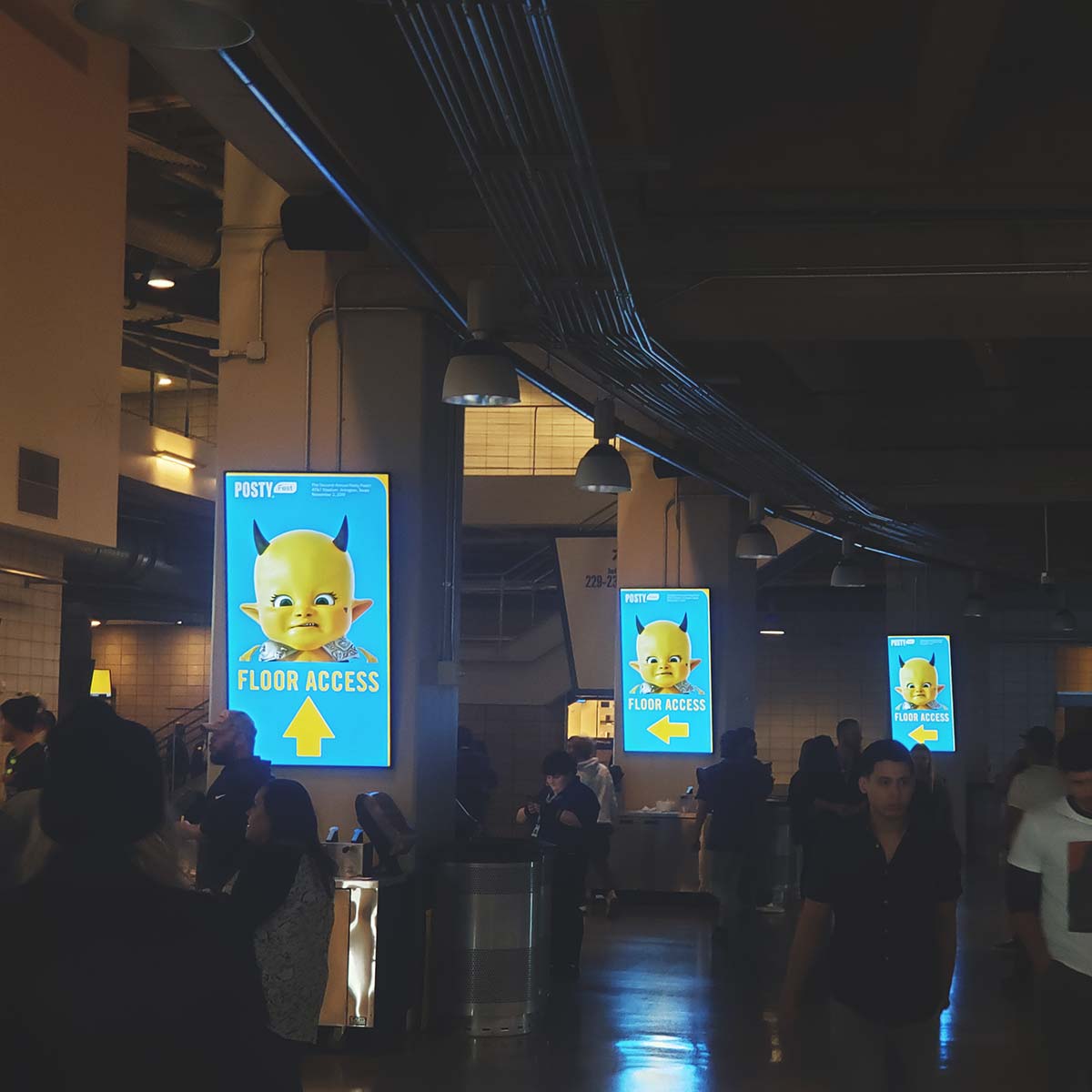 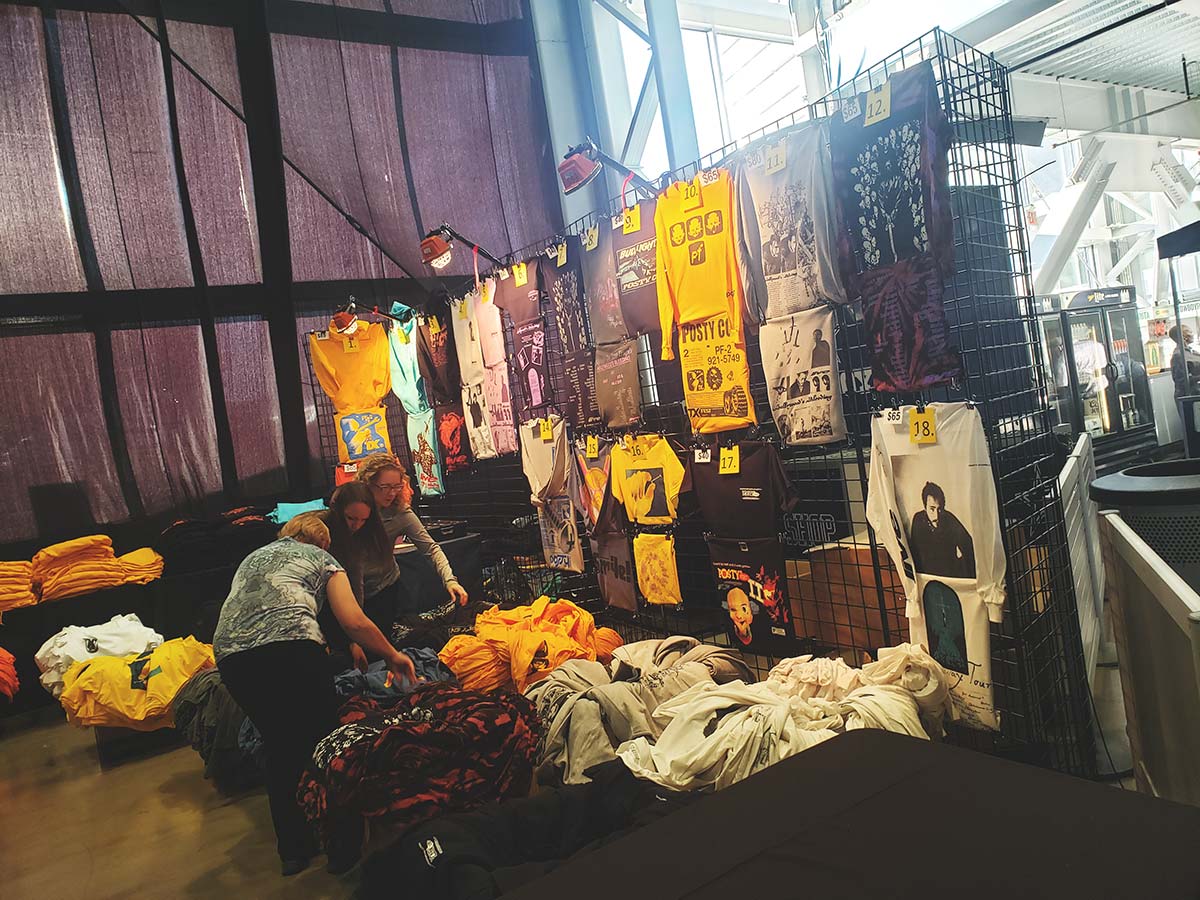 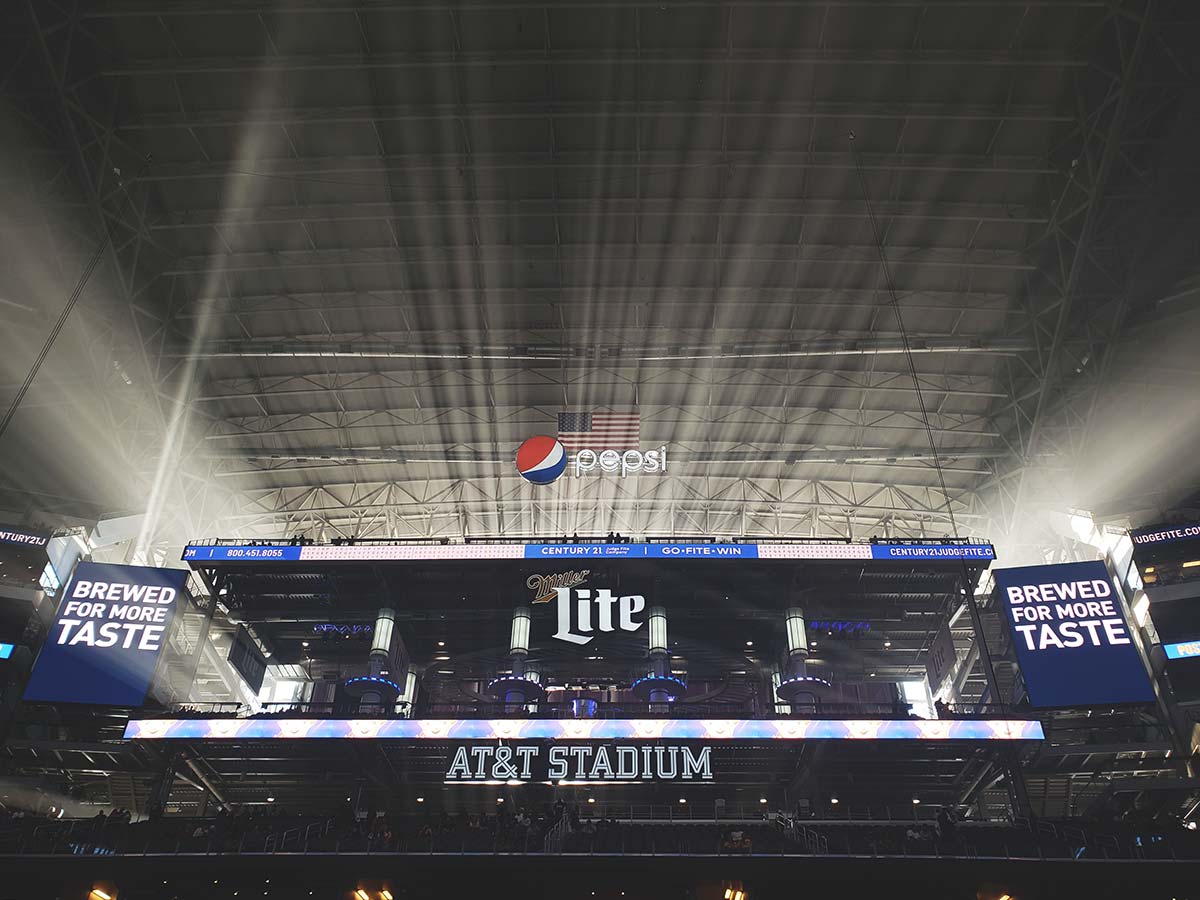 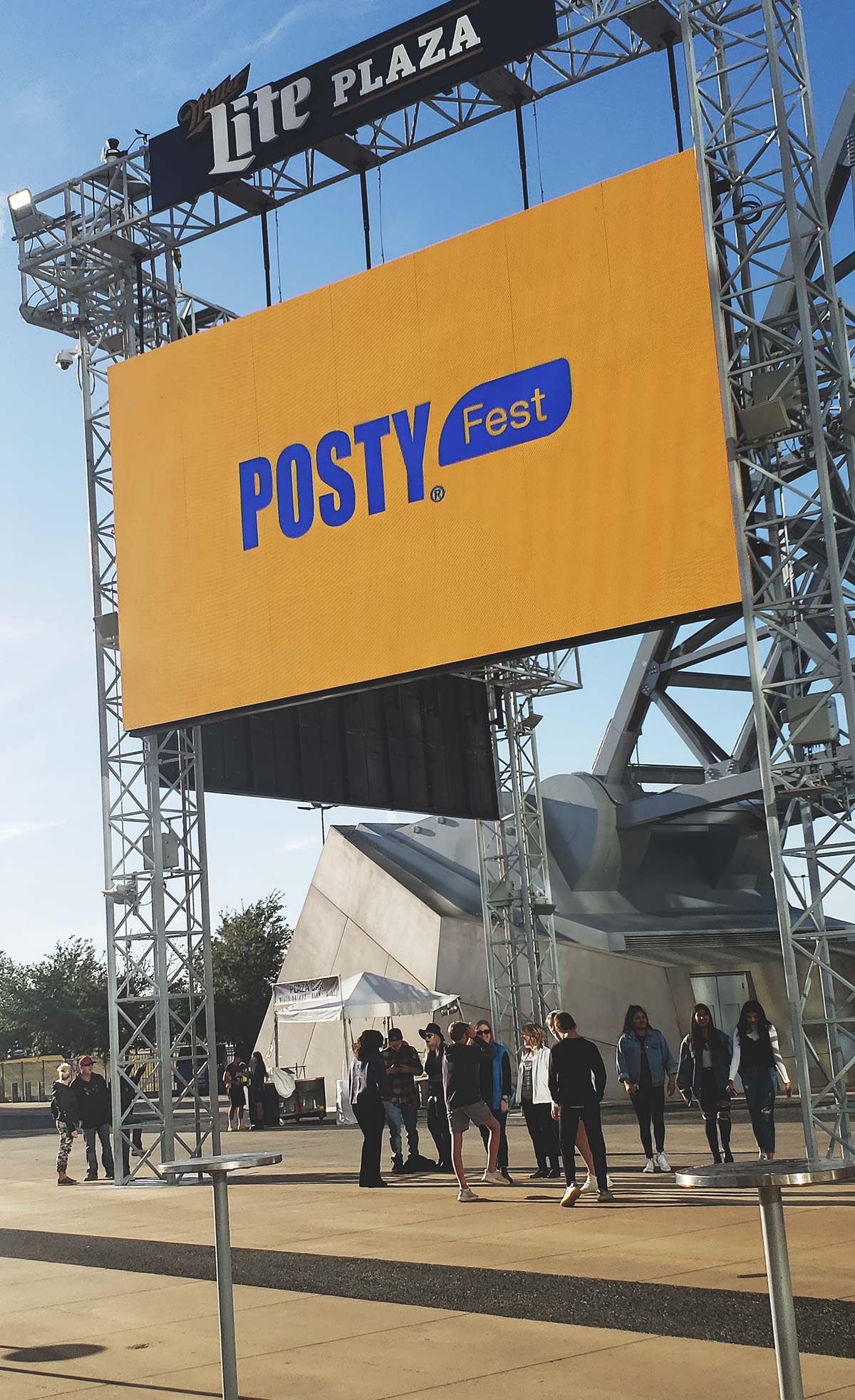 [Review] At His Own Curated Hometown Festival At The Home Of The Dallas Cowboys On Saturday, Post Malone More Than Looked The Part Of Stadium Headliner.

Cover photo by Emily Beattie. All others by Pete Freedman.

If there’s one thing the North Texas music industry has learned with certainty in 2019, it’s that throwing a music festival at AT&T Stadium — the much-ballyhooed home of the Dallas Cowboys — is by no means a guarantee of success. Look no farther than the clusterfuck that was May’s KAABOO Texas fest for proof of that.

But Saturday’s Posty Fest, the second annual hometown music festival offering from native Grapevine son Post Malone, was no KAABOO. By most all accounts, this 10-hour, three-stage and 15-billed-act affair in Arlington was an undeniable hit, drawing some 40,000-plus attendees to AT&T Stadium — more than double what it drew to its sold-out offering at Dallas’ 18,000-capacity Dos Equis Pavilion in its inaugural 2018 deal.

It was certainly a commercial hit, anyway. More than just a testament to the rap-indebted pop star’s substantial clout in 2019, Saturday’s festival was a celebration of the commodification of celebrity. Beyond the expected branding onslaught that reminded fans everywhere they looked that they were, in fact, in attendance at Posty Fest, the event was also in many ways a demonstration of the over-the-top nature of late capitalism — which we’re all in together at this point, for better or worse. In addition to the Bud Light cans for sale that bore Post Malone’s visage, fans could — and did — purchase all kinds of Post Malone-related merchandise at this affair, and far more than just your standard concert tee or concert-branded popcorn bowl at that. Yes, you could buy Post Malone’s Crocs collaboration here if you wanted. Dickies jackets designed by the artist, too. What about an Igloo cooler bearing the festival’s devilish mascot? Sure, if you wanted. Hell, if a Post Malone-branded blow-up sword was how you wanted to remember your attendance at this festival by, you could get one of those, too.

Might one describe this all as a little gauche? If you want to see Post Malone as emblematic of all that is wrong with America today, then yes, for sure. Without a doubt.

But Post Malone is far less a troubling symptom of American excess than an affable byproduct of it. And on a festival bill filled with artists who mostly looked desperate in their attempts to appear comfortable while performing on a stage this massive (both literally and figuratively), the 24-year-old born Austin Post was the only one who didn’t — not even for a moment — get swallowed up by the moment. To that end, it would take a real miser to deem this event anything less than a critical success, too.

Far removed from his days of performing the same song over and over again at Deep Ellum venue Trees simply because he didn’t have any other finished songs to resort to, Post Malone has indeed become a Very Big Deal. We’re talking about an artist here whose prowess has found him shattering long-held records from The Beatles and Michael Jackson alike.

(OK, boomers: Before you freak, take a breath. Your parents hated The Beatles, you might recall. And they thought Elvis Presley was a sinner because he shook his hips somewhat luridly by the standards of the time. Also, the joke is very much on you when you buy his fans’ tweets about not knowing who Ozzy Osbourne is. Learn how to internet. Hip-hop purists, you too need to take a chill pill when it comes to this guy: Posty is a rapper only by lazy designation; he almost exclusively sings his songs, which have mainstream appeal mostly because they, like every other hit du jour, are simply pop tracks bathed in hip-hop aesthetics.)

Despite the easy, jaded-music-critic narrative that Post Malone’s story is so often is slapped with, his appeal isn’t nearly as confusing as it is so often suggested as being. Rather, it’s gobsmackingly obvious. The guy writes memorably hooky pop tracks that are bolstered by pleasing melodies and abetted with slick production that’s designed to appeal to audiences with tastes that aren’t confined to a single genre. His success is neither shocking nor rocket science; it’s a simple matter of informed and clever songwriting, and the fact that he is just good at what he does, whether it’s meant for you. (If you don’t get it, then guess what: It isn’t. Since when has this not been the way things work?)

On Saturday night, Post’s appeal was obvious. For 90 some odd minutes, he performed hit after hit on his runway-like stage, much to the gleeful delight of his adoring and impressively diverse (by any metric) audience. He didn’t need many tricks beyond the music to succeed in this setting, either. Sure, he engaged in the expected placation ploys — “I’m so happy to be doing this in the best city and best stadium in the world!” he shouted between songs at one point to thunderous applause — but he mostly just performed his radio-tested and -approved songs, then otherwise charmed his way to this crowd’s roaring approval.

To varying degrees of success, his openers, to a tee, felt compelled to attempt much more. Jaden Smith, son of Will, took electric clippers to his hair in a stunt meant to rile up the crowd that looked at him cross when he rapped about having a tough upbringing. Pharrell Williams, the producer of countless hits, covered up his lack of performing pedigree by being joined on stage by dozens of dancers, whose concerted shimmying couldn’t help his set elevate past feeling like much more than an elevated jukebox offering, albeit a well-curated one. Meek Mill, meanwhile, covered his lack of widespread song familiarity by employing a pair of surprise guest song performances from Dallas rap hero Yella Beezy, who, along with Rae Sremmurd, had headlined one of the festival’s two outdoor stages, which was where the action earlier in the day was before things transitioned inside of the stadium.

Speaking of Rae Sremmurd: That group’s Swae Lee, who is currently on the road with Post as part of his still-ongoing “Runaway” tour, did make his expected appearance during the headliner’s set, joining him in joyously performing their blockbuster hit “Sunflower.” Though not announced on the bill previously, rapper G-Eazy too offered up a brief guest turn during Posty’s set, although that dalliance felt more like a chance for Post Malone to take a deserved breather than much else. Post didn’t really need those assists, though.

Through it all, he just did his thing, smiling widely the whole time. So, too, did his crowd, which probably would’ve shown up here in the same numbers, with or without the bold-faced openers joining him.

Like it or not, Post Malone is a rock star — one of the biggest in the world. And what do rock stars do? The headline stadiums — especially when they’re well en route to becoming the biggest musician all time with ties to the area in which those massive venues lie.

Saturday night was the first time this local kid was afforded the chance to do that. Barring catastrophe, it will certainly not be his last.