[Photos] Does Corn Dog-Eating Prowess Run In The Family? 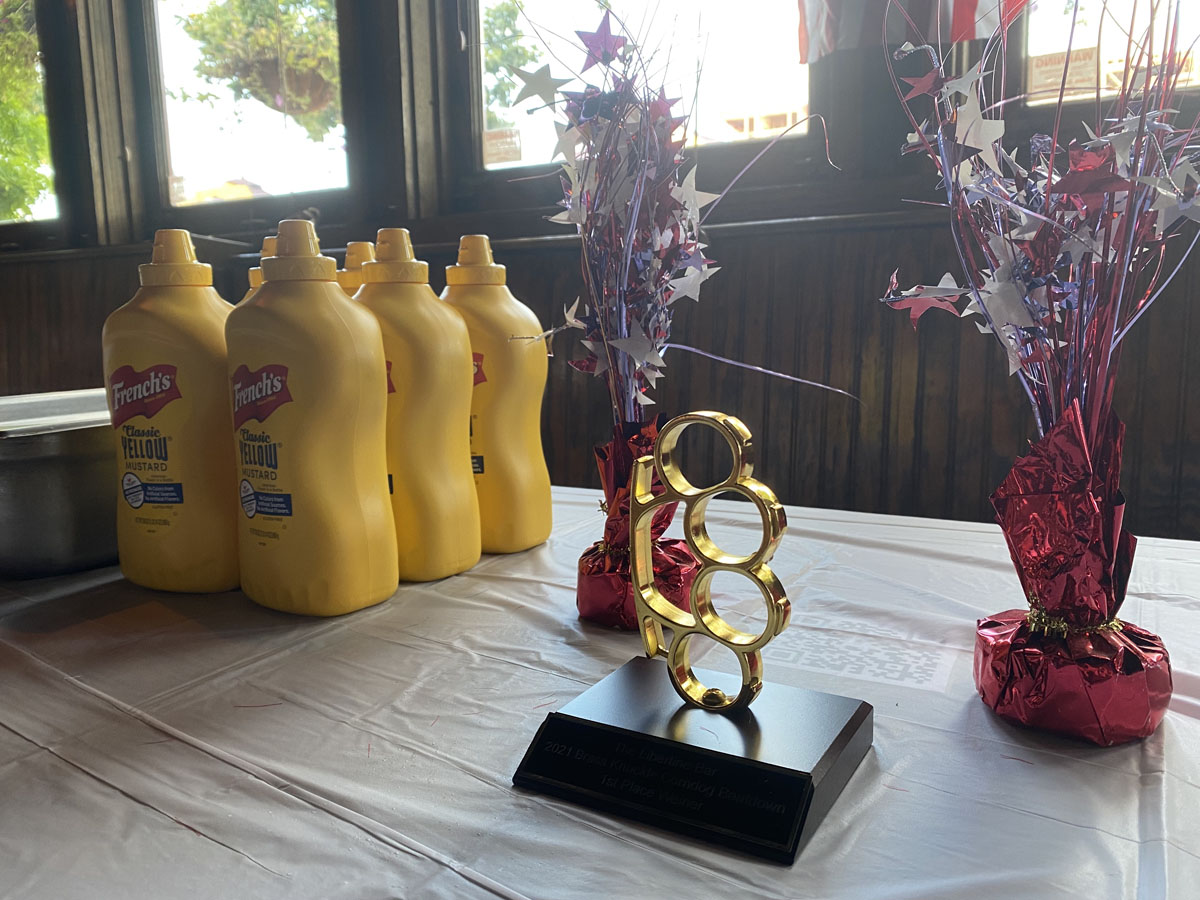 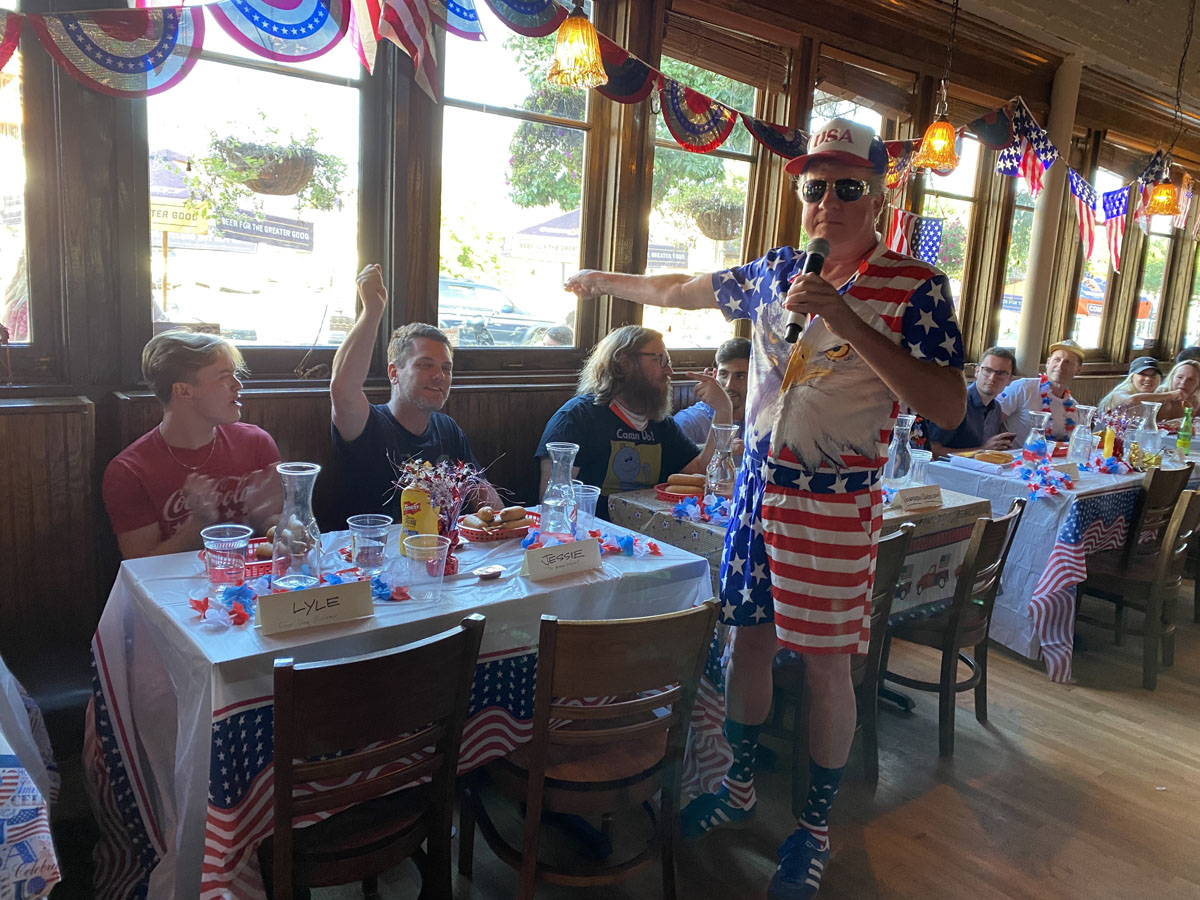 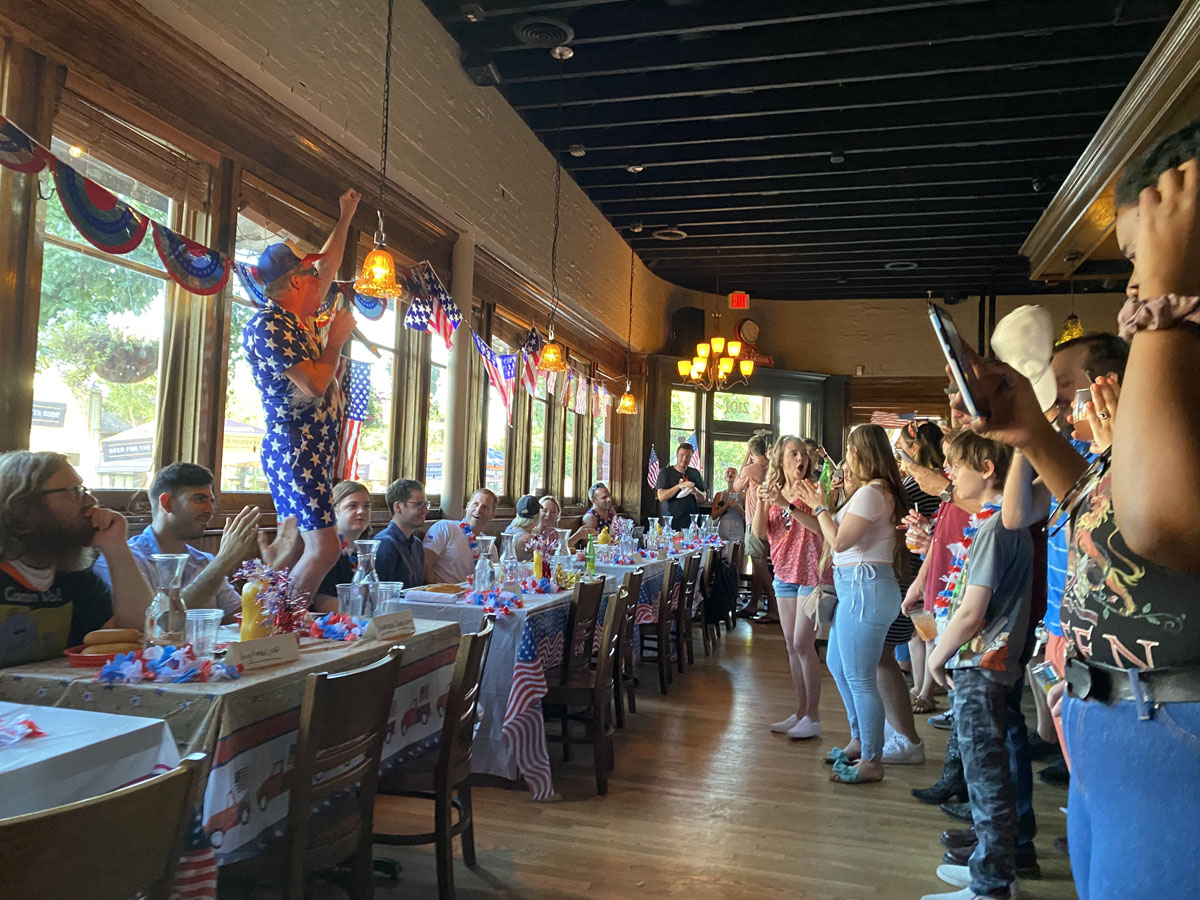 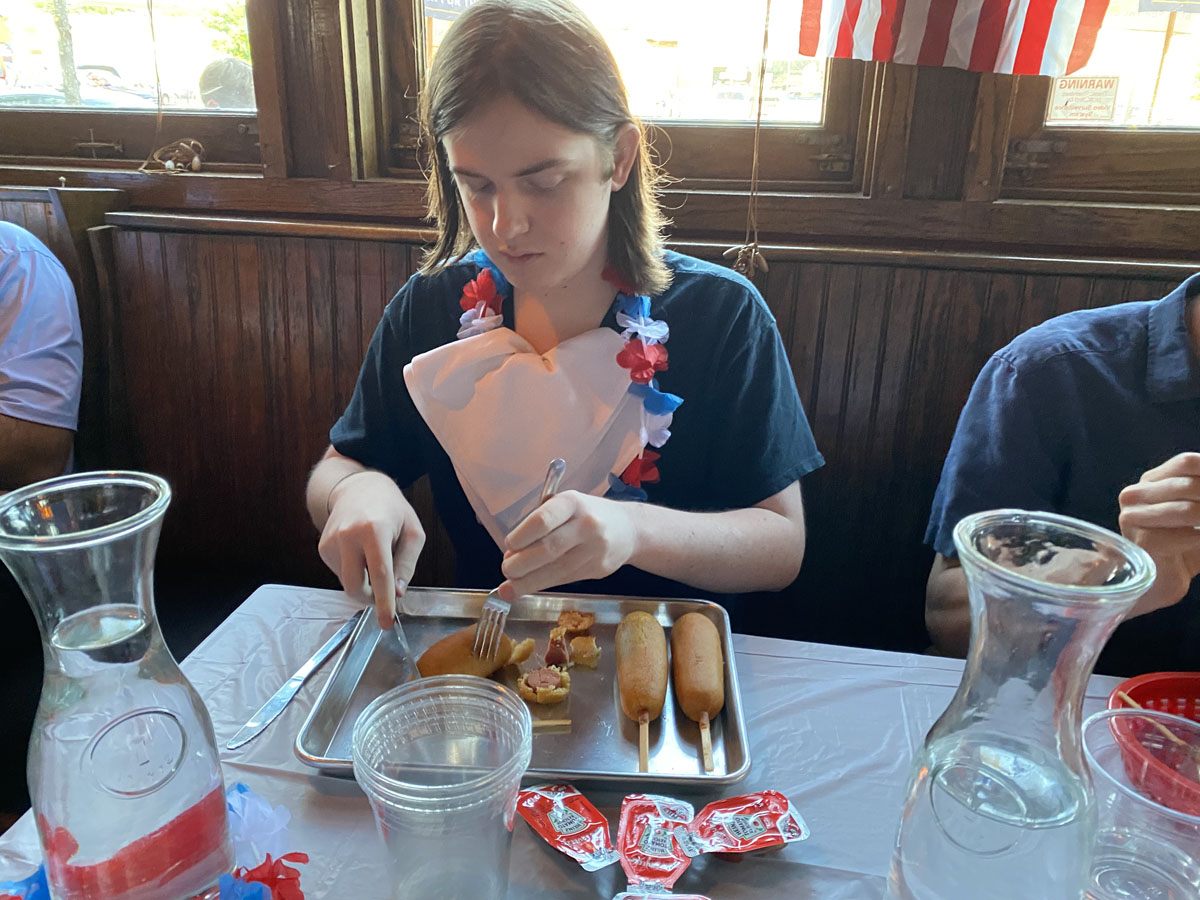 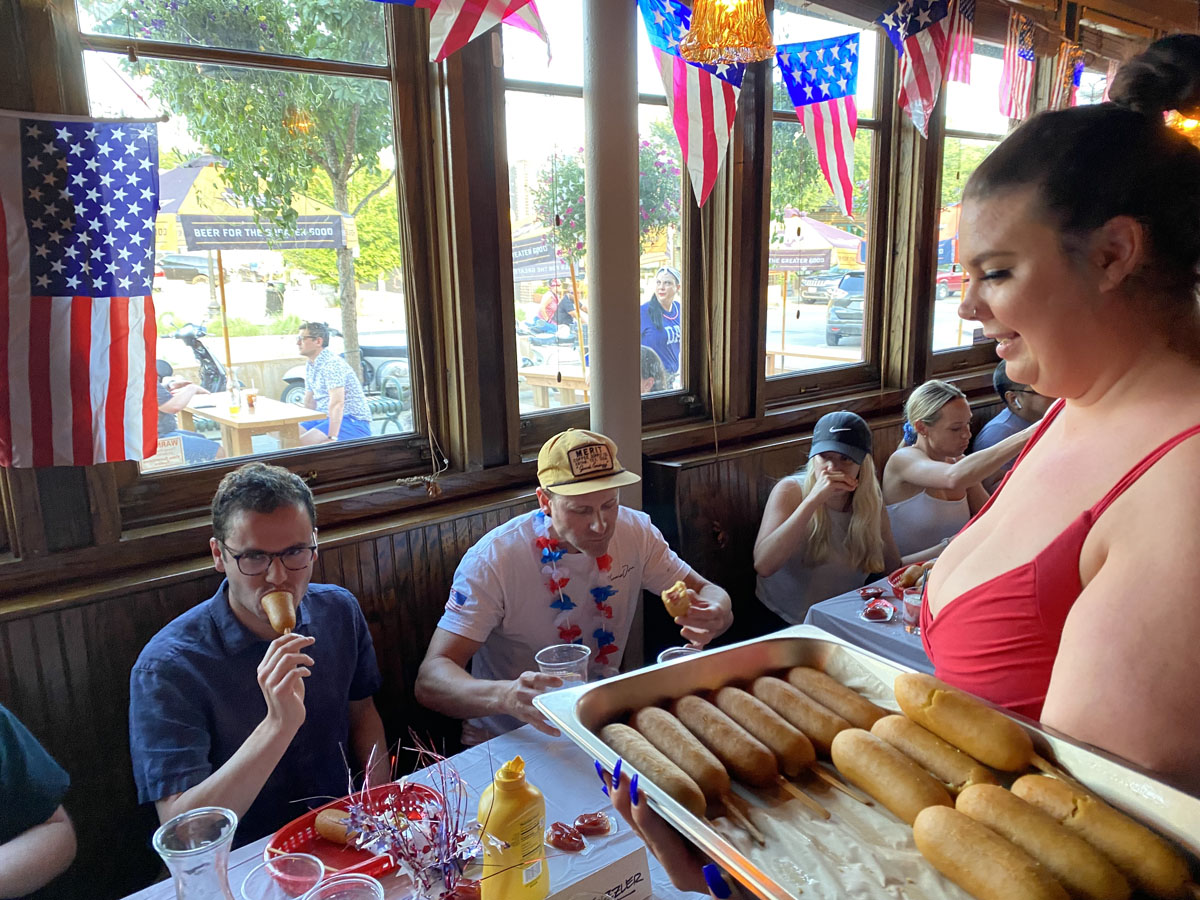 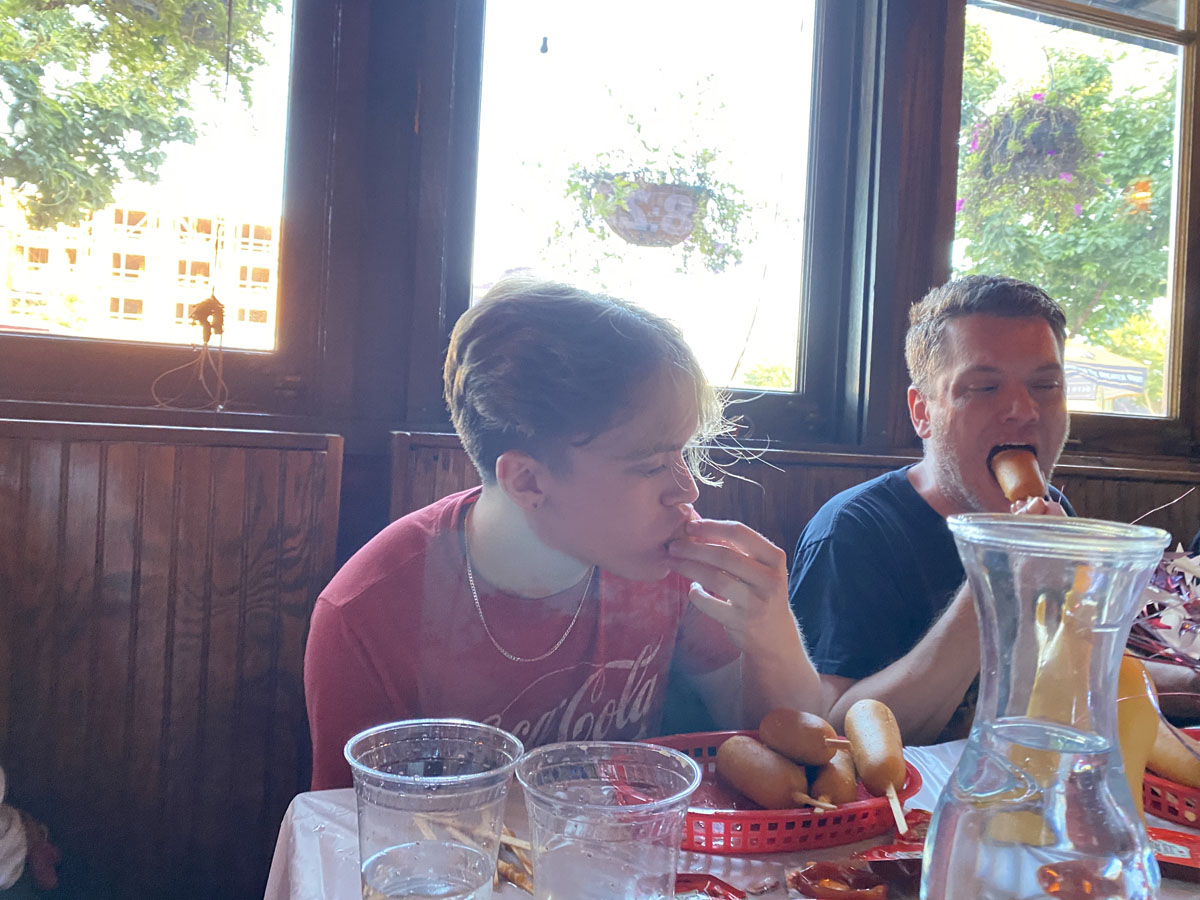 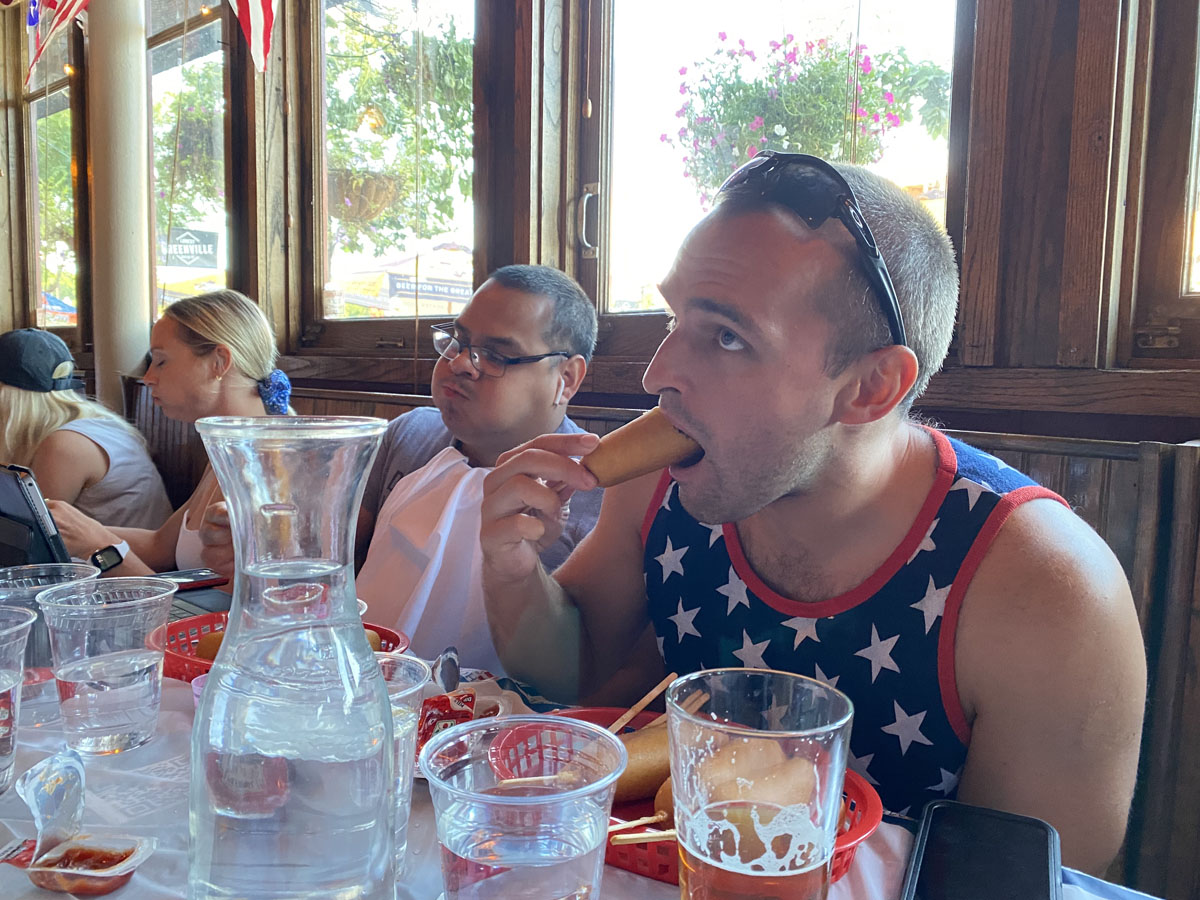 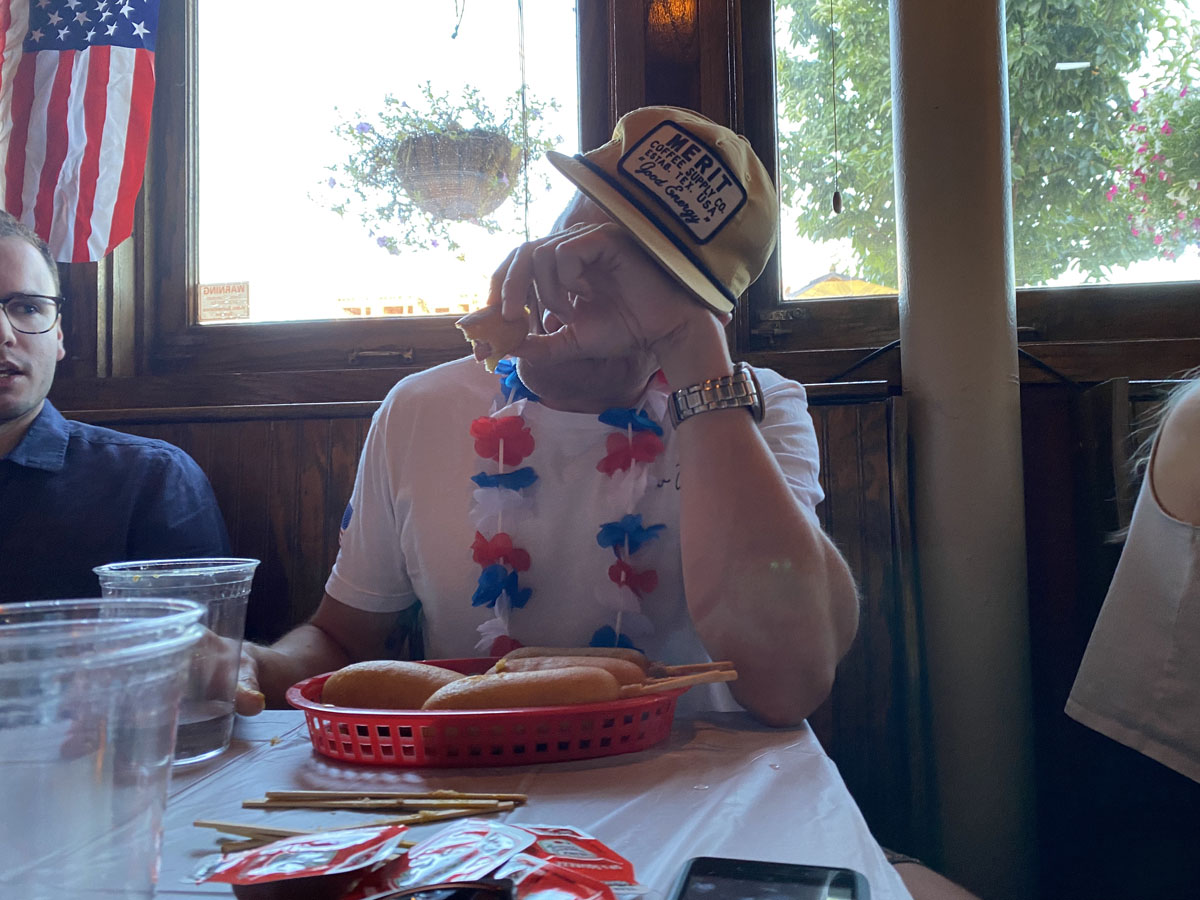 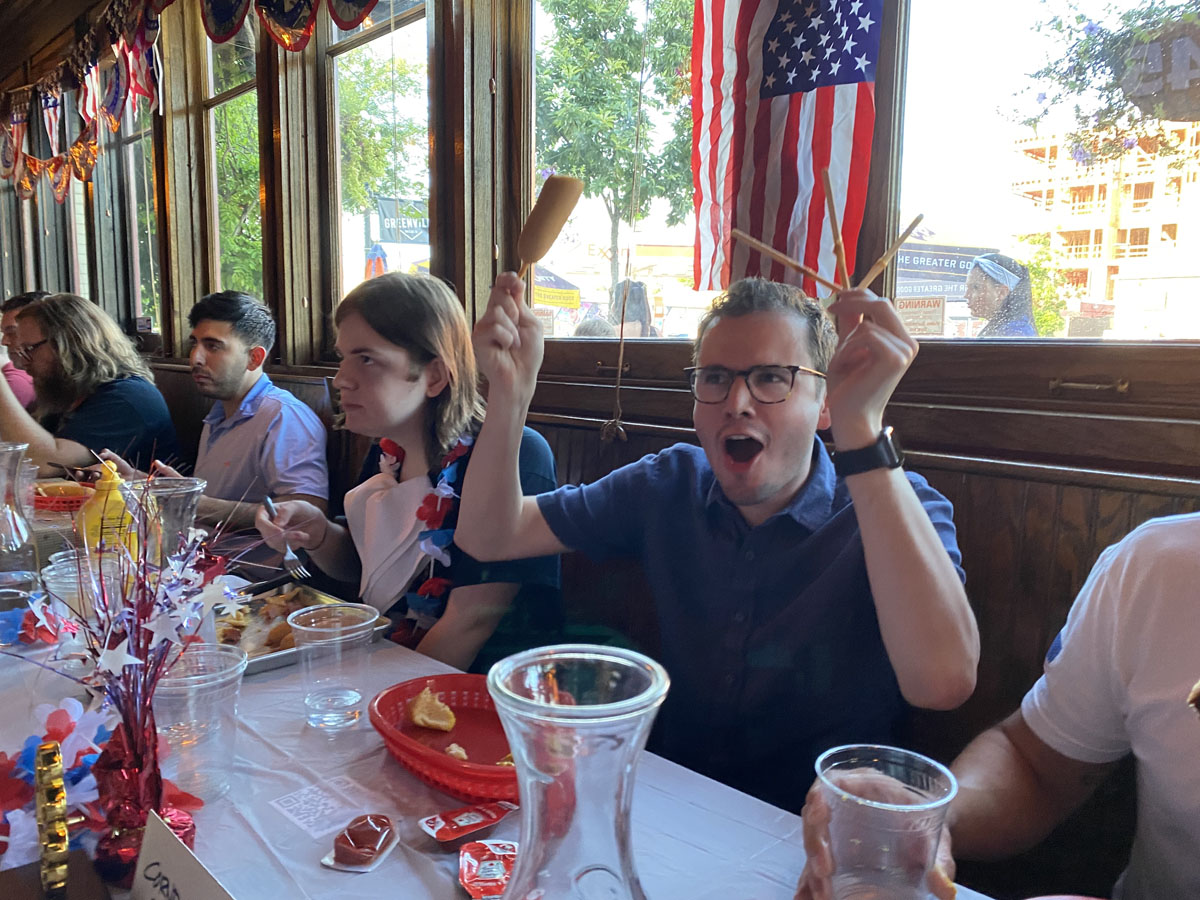 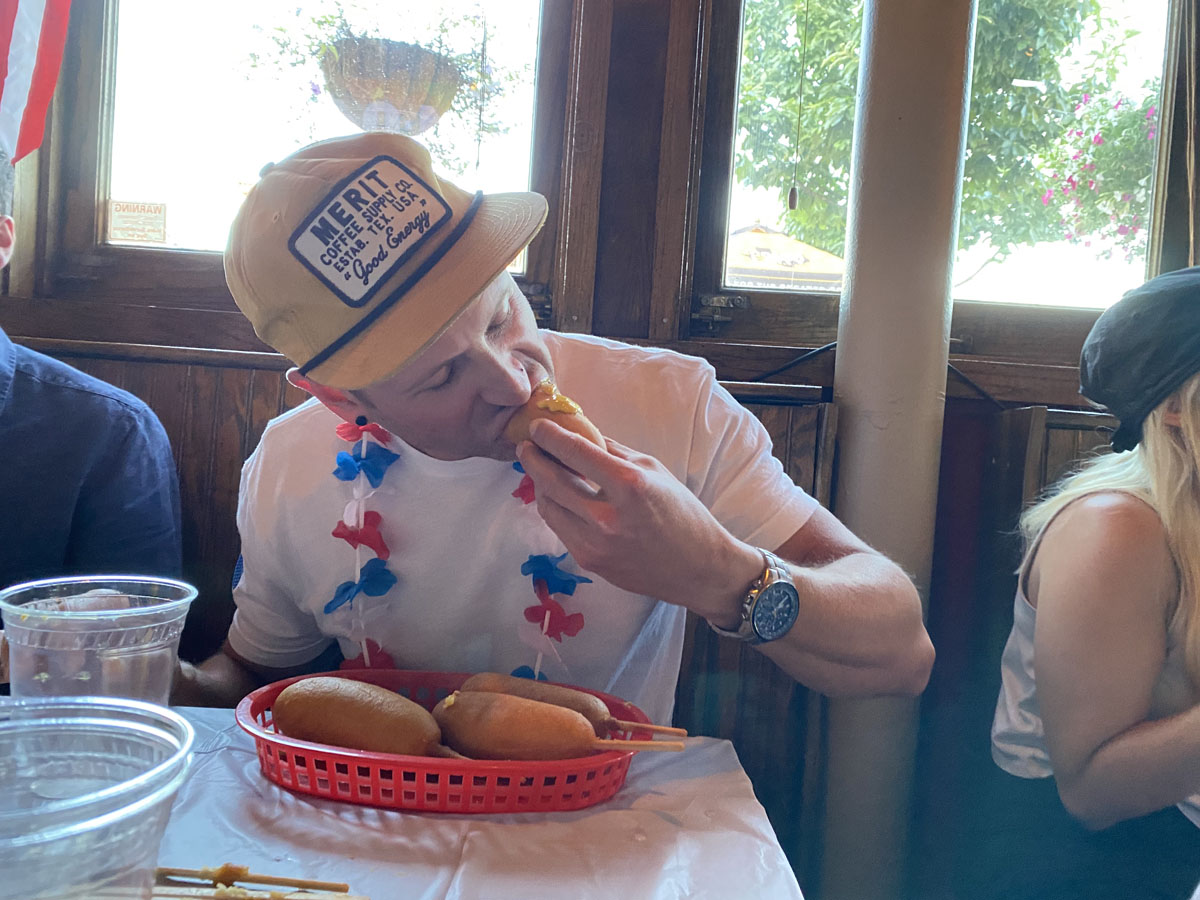 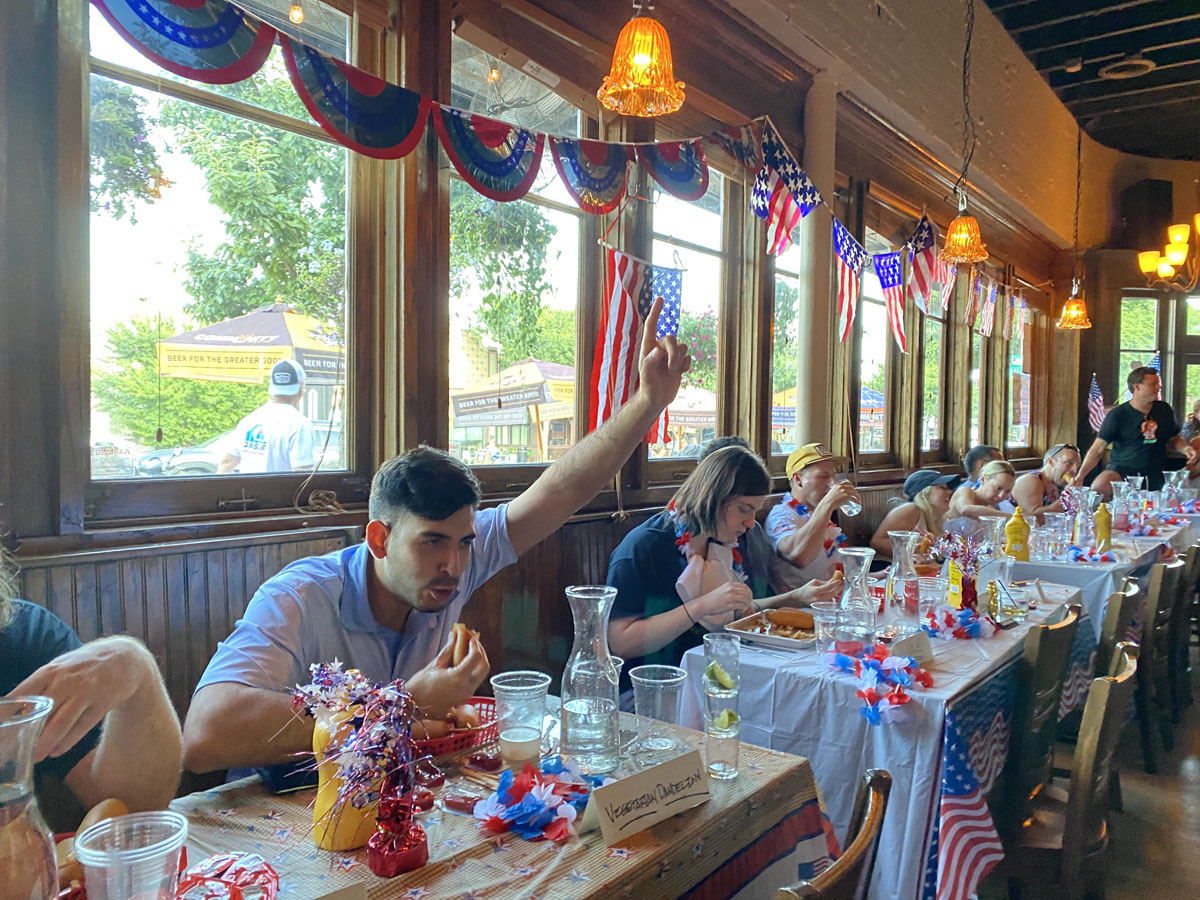 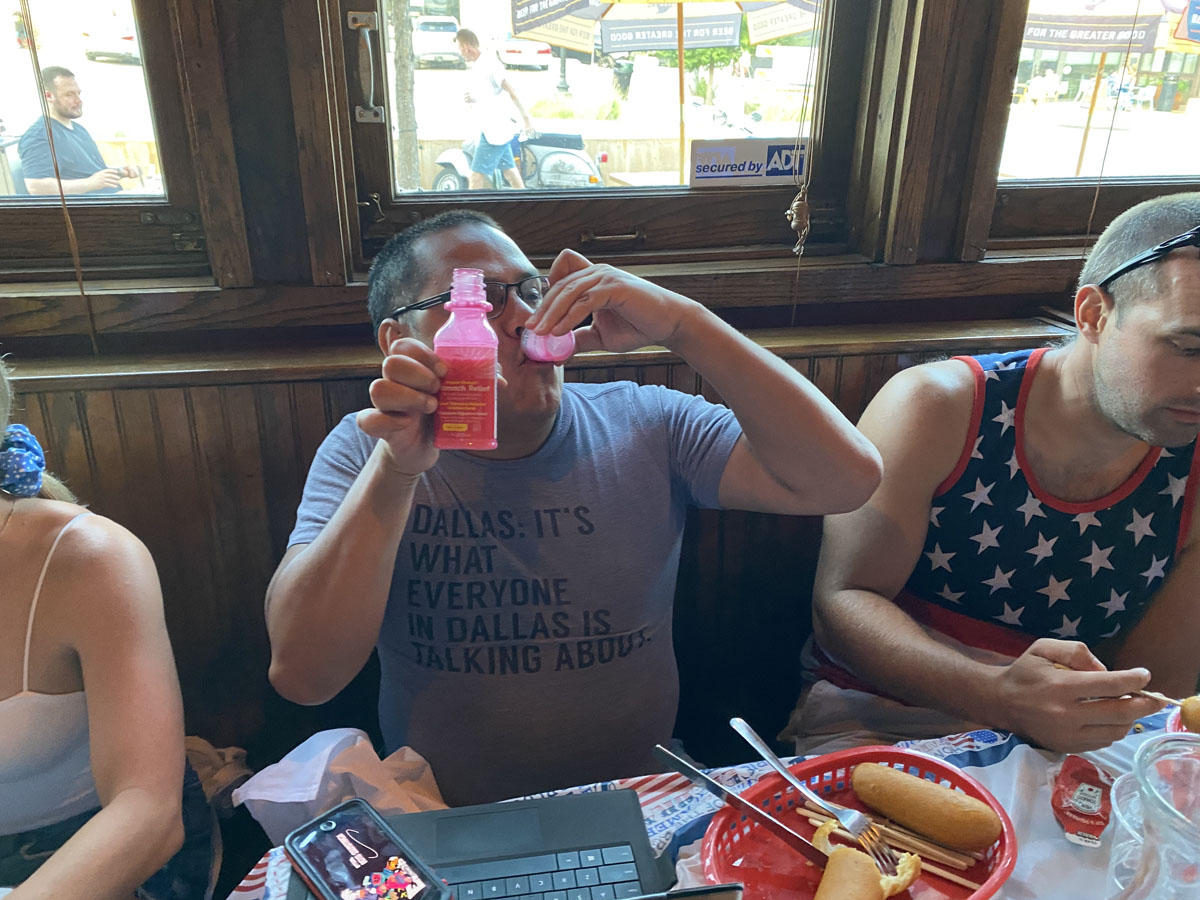 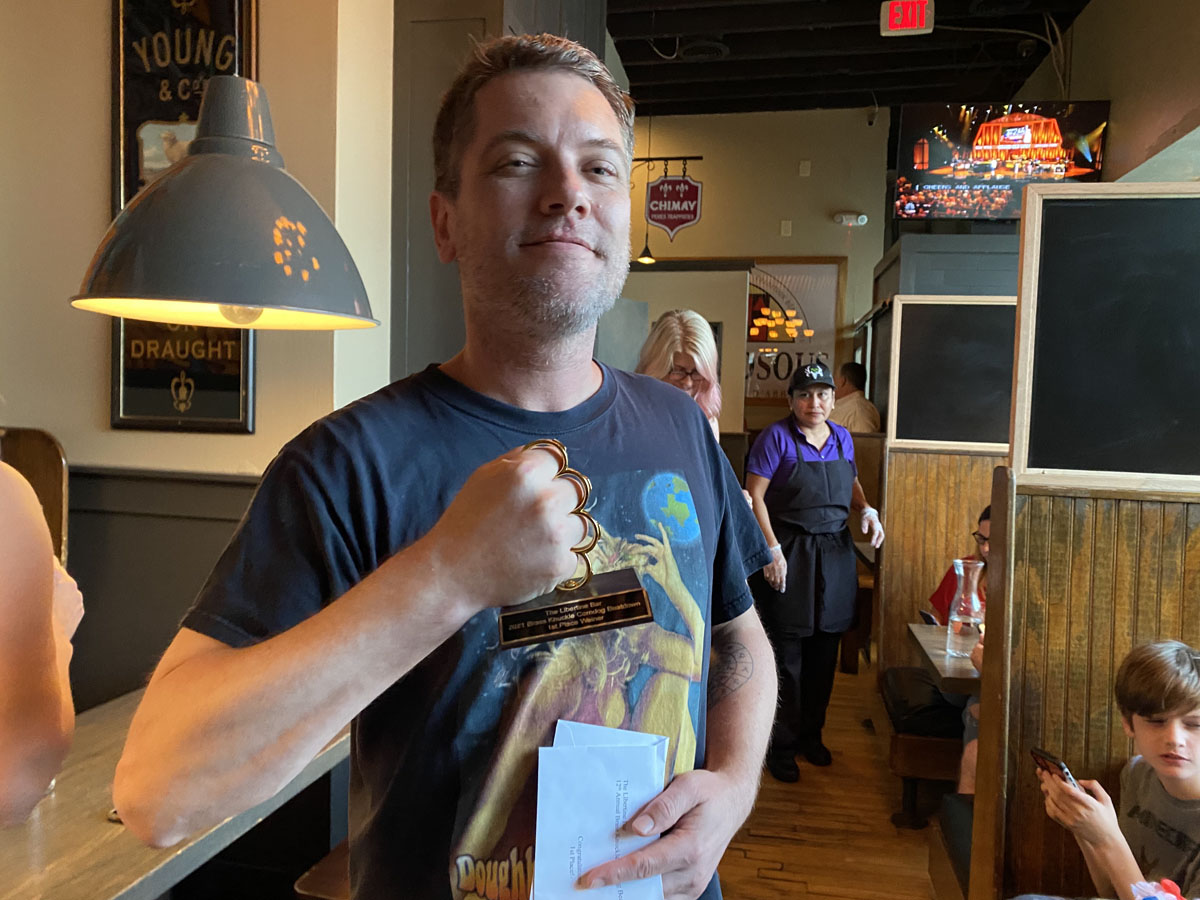 At The Libertine’s 12th Annual Fourth of July Corn-Eating Contest, A Returning Champion And His Newcomer Son Face Off For The Title.

All photos by Stephanie Salas-Vega.

Jesse Hughey had won the Brass Knuckle Beat Down twice before — but earning his third victory this year was different.

After a six-year break, the 43-year-old former Dallas Observer writer returned to The Libertine for the bar’s 12th annual Fourth of July corn dog-eating contest to reclaim his title by eating 10 corn dogs over the course of the competition’s 15-minute run.

In the six times he previously had entered the contest, the man they call “The Garbage Disposal” earned himself the gold brass knuckle trophy first in 2009 by downing 16 corn dogs, and then again in 2011 by scoffing down 19 corn dogs.

Starting in 2015, though, Hughey decided to take a break from competing after he lost in 2014 during a contest in which he ate a personal low-count of eight corn dogs. But the time off from competitive eating gave him enough time to train.

“I did real bad and I needed to make up for it,” Hughey said at this year’s event. “I didn’t want to end with that as my legacy.”

When Hughey showed up at the Lower Greenville bar on Sunday, he immediately became the one to keep an eye on — not just because he was the only previous winner in this year’s version of the star-spangled event, but because he was competing for the first time alongside with his 19-year-old son, Lyle, who had designs on taking down his father for the throne.

But the elder Hughey was the clear fan favorite: Even before the 15-minute timer started and the corn dogs were still making their way to each red plastic fast food basket, a group of supporters cheered his name, asserting that he didn’t even need to compete to prove he could out-eat the 12 other contestants.

Those eaters, who ranged from vegetarians to TikTokers, sat in a row at red-, white-, and blue-decorated tables, each also dressed with ketchup and mustard bottles and water cups, which a few used for dunking their corn dogs before downing them. On the other side of the tables stood a crowd of supporters cheering on and live-streaming the proceedings with their phones. Some showed up wearing American flag-themed outfits and bearing Fourth of July props. More than a few even snatched some corn dogs to eat themselves while watching the Beat Down.

It had been two years since Brass Knuckle fans had been together like this, and it was an almost wholesome sight to see. The COVID-19 pandemic had canceled the event in 2020, and this year’s return to action felt like a sign of life finally returning to normal.

Things were decidedly less comfortable on the other side of the tables, though, as competitors struggled with the task at hand. Only the father-and-son Hughey entrants seems calm and collected in the moment as they steadily downed as many corn dogs as they could and piled up their naked, wooden sticks on the table.

Lyle Hughey, a student at the University of Houston, knew he wanted to take down his father. Days prior to the event, they even had their own trial run of the contest to see how many corn dogs they could stomach. The younger of the two ate nine corn dogs in eight minutes during that one-time practice, but the corn dogs are the bar were way bigger, slowing him down. He’d also fasted before the event, which he says backfired quickly because it only made him feel sick. Indeed: Moments after the 15-minute hit zero, he was looking pretty queasy and holding on to his stomach. Eventually, he puked right into his basket.

In the end, his dad was too strong a competitor to take down. But the Hugheys still finished first and second overall, with Lyle downing eight to Jesse’s 10.

Although the win is what the senior Hughey came for, all he could think about after the fact was just how proud and excited he was for his son.

That’s exactly what the son plans to do, too.

“I plan on beating my dad next year,” the son of the champ said. “If I can beat his record, that’d be pretty awesome.”

A History of The Libertine’s Brass Knuckle Beatdown Winners (And Their Total Number of Corn Dogs Eaten In 15 Minutes):

* At this point, the name of the 2010 winner remains lost to history. No media outlets covered that year’s competition, and none of our sources who attended that year’s event can recall his name. Memories of the second-annual contest — or is it lore? — recall the winner as a minor with professional eating aspirations whose father drove him down from Oklahoma to participate in the event. Legend (read: fuzzy, alcohol-addled memories) has it he ate 24 corn dogs in his effort. Regardless, the winner definitely ate 19 or more corn dogs: Three separate accounts from the following year note that 2009 and 2011 winner Jesse Hughey placed second in 2010 with 18 dogs downed.