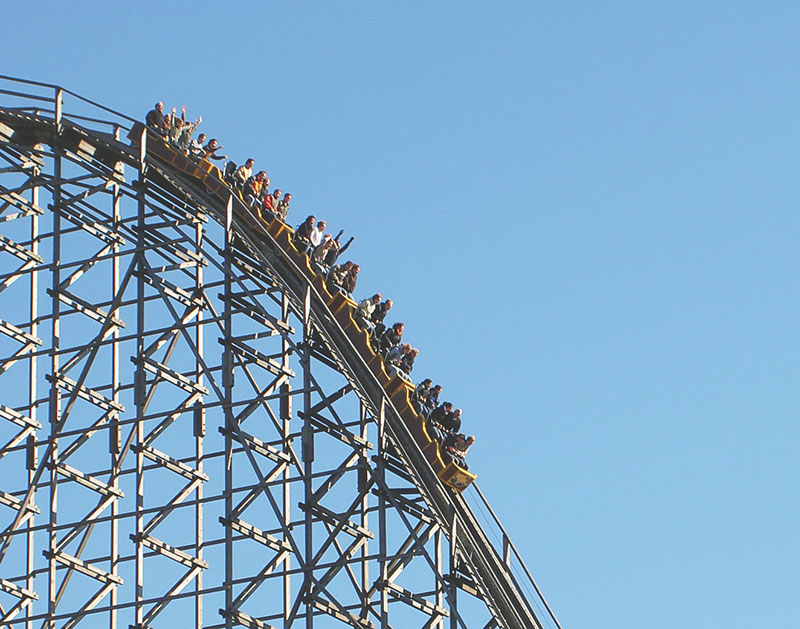 The Dallas Amusement Parks to Avoid This Summer.

It’s that time of year, folks. Summer has begun, and all the fun of roller coasters, water slides and funnel cakes have started calling out to you.

Granted, trips to the amusement park were a lot more fun when you were a kid on summer break with nothing to do all day. Hell, if you were lucky, you and your friends even got summer passes to an amusement park and passed entire weeks on roller coasters or water slides.

As an adult, though, you’re lucky to get out to an amusement park maybe once a year — and if that, really.

Still, a trip to the amusement park can still be a good time. And, lucky us, there are quite a few amusement and theme parks in the area. But, let’s just be real here, not all of the parks in the region are worth your time and money.

In fact, we’d argue that some of them are a complete waste of both of those valuable quantities.

With that in mind, and before you go out exploring the area’s offerings over the next few months, here are some of the are amusement parks we advise you to avoid at all costs this summer.

Park: Sandy Lake Amusement Park.
Location: In Carrollton, just off I-35E’s Sandy Lake Road exit.
What You Need To Know: If you grew up in the Dallas/Fort Worth area, chances are you visited Sandy Lake Amusement Park at least once while in grade school or middle school. Chances are your grandparents went to Sandy Lake when they were in grade school, too. And y’all were probably rode the same rides. The park hasn’t changed much in forever. That could be seen as a good thing; it certainly keeps the costs down, and there’s no doubting Sandy Lake is one of the cheapest options in the area. But there’s no doubting the fact that Sandy Lake is lacking some amenities.
Why Yelpers Say It Sucks (In Their Own Words): “The last time I visited Sandy Lake Park was with my 6th grade choir class. I don’t want to date myself, but I think I probably wore my Chic jeans and Izod shirt. On my return visit with 2 kids of my own, this place looks exactly like it did in 1982.”

Park: Zero Gravity.
Location: In Dallas, just north of I-35E’s Walnut Hill Lane exit.
What You Need To Know: In some ways, this is more than an amusement park. But in so many other ways, it’s so much less than one. Maybe that’s why Zero Gravity bills itself as a thrill park. Maybe, you could argue, there’s as much fun to be had here as there is on some of the most daring of rides at Six Flags. But, at Zero Gravity, you only have five options. And it’s not like you’ll be hitting these thrill rides over and over — not unless you’re packing a wad of cash. Each ride costs at least 30 bucks and lasts maybe 30 seconds. Not a lot of bang for your buck, if you ask us.
Why Yelpers Say It Sucks (In Their Own Words): “Pricing is a bit ridiculous considering the actual amount of time you spend on each ride is about 30seconds to 1minute. If you only want to ride one ride, the cost is $30 and then an additional $12 for any other ride. If you are a true adrenaline junkie, they offer a pass for $70. This is definitely the best value. They also offer the option to have your experience video-taped for an additional $12.”

Park: SpeedZone.
Location: Right across the street from Zero Gravity.
What You Need To Know: Just slightly more cost effective than Zero Gravity but oh-so-tamer is the for-some-reason ever-popular Speed Zone. The thing about this place? The lines. Oh, those lines. The peak attraction at this motorsports-themed park seems to be the Top Eliminator Dragster. It’s billed as 3.5 heart-pounding seconds in the seat of a 300-horsepower dragster. But, c’mon, it’s on a track. We’re not saying you should be able to drive an actual drag racer at SpeedZone. But it’d be a lot cooler if you could. So let’s cool it with the hype.
Why Yelpers Say It Sucks (In Their Own Words): “Horrible…. slow slow & slow! Not enough help & the lines are forever. Ask someone on the floor for help and they say sorry can’t help you. $3 waters, $14 for small pitchers of beer, and didn’t I mention they are slllllloooooowwwwwww?”

Park: NRH20.
Location: In North Richland Hills, just off of Grapevine High, a little ways north of State Highway 121.
What You Need To Know: Honestly, of all the parks in the region, this is the one we feel the sorriest for. It’s well-intentioned enough; it just wants to be your neighborhood family water park. But, not only is there a water park every 10 miles in the Dallas/Fort Worth area, the behemoth that is Hurricane Harbor just 20 minutes away from this one. And Harbor has NRH20 beat in every way — including price and variety. Kind of a shame, really.
Why Yelpers Say It Sucks (In Their Own Words):: “There are other hidden costs however. First of all, who the hell came up with the idea of a water park with no apparant place to change? For us, being all guys, we had to use the men’s restroom. Kinda yucky. There was a very small area to change in however. And really, you’re not going to come out here from Dallas without a change of clothes are you? ARE YOU? Anyway . . . oh did you want a locker to lock up your valuables? You DO? Okay fine, that will be another $10 please. But seriously, we went through about 20 drinks between the three of us during the day which would have otherwise been another . . . what? $60? Yeah something like that.”