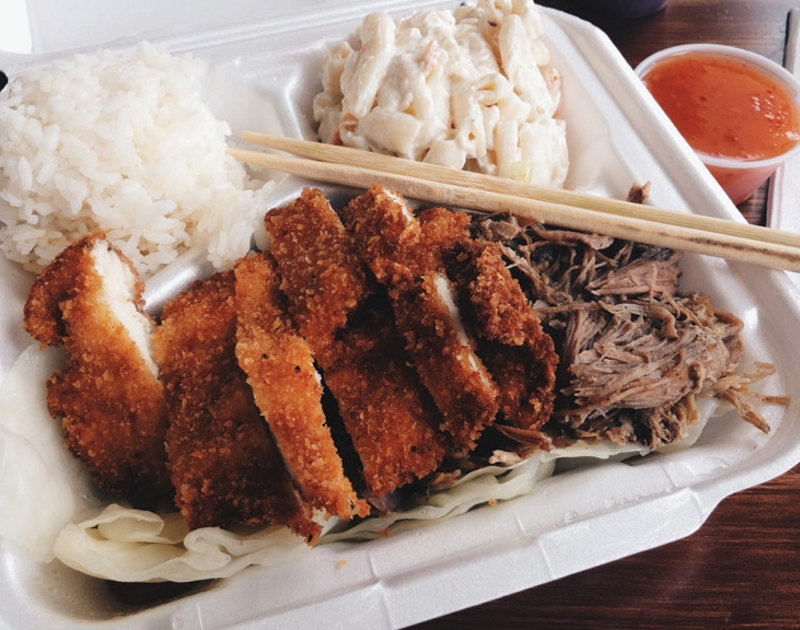 We Love Poké As Much As Anyone Else, But Dallas-Fort Worth Boasts Some Amazing Restaurants That Serve Other Polynesian And Hawaiian Island Favorites, Too.

Ever since the poké craze hit the Dallas last year, it seems as if every nook and cranny around the city has been filled with spots slinging the flavorful and colorful fish bowls from Hawaii.

But, while poké is indeed one of the most recognizable foods to come from the Hawaiian Islands, it’s important to remember that that it represents just a portion of Polynesian cuisine. Thanks to waves of immigration throughout the history of the islands, this region’s culinary landscape has been shaped by Japanese, Chinese, Portuguese, Korean, Filipino and Puerto Rican influences upon its own traditional techniques and vegetation. It’s also impossible to ignore the monumental impact that the introduction of Spam had on this region during World War II, and how it led to other American staples being normalized throughout Oceania.

And, lucky us, we’re able to get a taste of what these island cultures have to offer without even booking a flight. That because, right here in North Texas, we boast a significant number of restaurants that focus on authentic Hawaiian and Polynesian dishes.

So if you’re looking for the closest spot that serves Spam musubi, or you’re looking to get your hands on loco moco for the first time, these seven places that serve up Hawaiian and Polynesian food throughout North Texas will help you get over your poké rut.

Aloha Hawaiian BBQ
5610 Lemmon Avenue.
Dallas.
Tucked away in Oak Lawn, this popular takeout spot specializes in plate lunches for under $10. Aloha also serves harder-to-find Hawaiian specialities such as Portuguese sausage musubi, Filipino banana lumpia (read: turon) and Spamburgers — and we sure dig it! But one of the best features of the restaurant are the urns of spicy and sour, katsu and Aloha sauces for customers to use to their heart’s content.

Ohana Hawaiian BBQ
2402 W. Walnut Street.
Garland.
Hawaiian staples are done in Texas-sized portions at this sleepy Garland haunt, and while Ohana’s main focus are its island-inspired plates and combo meals, the restaurant leans into the Chinese and Japanese influences on Hawaiian cuisine with familiar items like teriyaki bowls, crab rangoon and Hawaiian-style fried rice.

L&L Hawaiian Barbecue
8404 Preston Road.
Plano.
Located in an inconspicuous Plano shopping center, L&L is one of three Texas franchises for the famous Hawaiian chain. The menu focuses on traditional Hawaiian comfort foods, encompassing the range of ethnic influences on the islands’ cuisine. Here you can find items like lau lau, a pork chuck steamed in taro leaf, and variations of Hawaiian-style ramen called saimin. And if you’re still hungry after your entere, you can even indulge in the region’s doughnut-like confections called malasadas.

Halo Hawaiian BBQ & Poké Bar
2613 Park Row Drive.
Arlington.
Although Halo spot does indeed serve poké, its balanced menu of other Hawaiian favorites makes it a worthwhile mention on our list. This Arlington spot features dishes like chicken katsu curry, katsu musubi and different flavors of saimin. Better yet, most of Halo’s plates clock in at under $10 apiece, making it an affordable option for the area’s college population.

Coco Shrimp
4440 Basswood Blvd.
Fort Worth.
This popular Fort Worth food truck steps outside of the plate lunch and poké arena to focus on another island favorite — shrimp bowls! The truck offers a variety of shrimp, rice and salad combinations made with different Hawaiian-inspired flavors such as creamy ginger and deep-fried coconut. In addition to the truck’s niche entrée selection, it also serves a variety of mochi ice creams in flavors like blood orange, guava and mango.

Ana’s Island Grill
603 N. Main Street.
Euless.
This hidden Euless gem has been serving Polynesian favorites to the community since 2013. In addition to its beloved barbecue plate lunch, Ana’s is one of the only restaurants in the Metroplex where you’ll find Tongan cuisine. One of the more popular Tongan specialties you’ll find here is the ‘otai, which is a drink made with watermelon, mango and other tropical fruits. (Not familiar with Tonga? It’s a small island off the coast of Fiji.)

Waikiki Teriyaki
4344 S. Hampton Road, Suite 150.
Dallas.
This South Dallas newcomer highlights the Japanese and Korean influences on Hawaiian cuisine at an affordable price point. Although the restaurant primarily focuses on variations of its namesake dish made with your choice of protein, its Japanese influences are also found in items like the shrimp tempura and yakisobas. On the Korean side of things, the menu features dishes like beef bulgogi and lava chicken.