Half Of Its Starting Defense Was Injured But TCU Still Clobbered SFA to The Tune of A 70-7 Win.

Having a dynamic, Heisman front-running quarterback like Trevone Boykin covers up a lot of blemishes.

The senior threw for 285 yards, four touchdowns and one interception in the TCU Horned Frogs home opener against the Stephen F. Austin Lumberjacks at Amon Carter Stadium in Fort Worth on Saturday. But, while all eyes were on the high-powered offense during the 70-7 victory, head coach Gary Patterson was shuffling around the depth chart on the defensive side of the ball, where the team had lost four starters heading into the game.

Things only got worse from there. Early on in the contest, TCU lost another starting defensive player when senior safety Kenny Iloka left the game with a knee injury. To recount: That's five starters the No. 3 team in the nation has lost in its first two weeks of the season, including linebackers Sammy Douglas (undisclosed injury) and Mike Freeze (left team indefinitely), defensive end James McFarland (foot injury), defensive tackle Davion Pierson (undisclosed injury) and now Iloka (knee).

Fortunately for them, TCU wasn't exactly facing the most menacing of opponents in SFA on Saturday and the defensive line somehow still managed to keep constant pressure on the Lumberjacks quarterbacks throughout the game. The subs did OK: Linebacker Travin Howard, who stepped into the lineup for Douglas, led the team with nine tackles and forced a fumble.

On the offensive side of the ball, the game provided the Horned Frogs an opportunity to work on its deep routes with speedster wide receiver Kolby Listenbee, something the team was unable to do against the Minnesota Golden Gophers last week. The senior caught six passes for 142 yards and a touchdown, including a 60-yard bomb.

“It’s pretty cool that we got to throw the ball up deep,” Listenbee said after the game. “We are just going to keep working. When other teams fear the deep ball, that just opens things up underneath for us.”

Actually, everything was open for the Horned Frogs against its FCS opponent on Saturday. The team racked up 627 yards of offense and had an opportunity to work in each of the team's running backs after starter Aaron Greene scored two quick touchdowns in the first quarter on five carries. Sophomore Trevorris Johnson led the team with 71 rushing yards.

Next Saturday, the Horned Frogs will host an improved SMU Mustangs squad for the 95th meeting of the Battle for the Iron Skillet.

TCU quarterback Trevone Boykin (2) warms up during pregame. The TCU Horned Frogs debuted their new lizard skin uniforms for the 2015-16 season against the SFA Lumberjacks.

TCU quarterback Trevone Boykin (2) leads the Horned Frogs onto the field for pregame warmups. Boykin played in just the first half and one drive in the second half after throwing for four touchdowns.

TCU defensive end Josh Caraway (94) scans the backfield in the first half against the SFA Lumberjacks. Carraway is one of many players on TCU’s depth chart stepping into starting roles since the defense has been depleted by injuries.

TCU wide receiver Kolby Listenbee (right) catches a pass near the sideline in the first half against the SFA Lumberjacks. Listenbee led the team in receiving with six catches for 142 yards.

TCU running back Aaron Greene scores the first of his two touchdowns on the afternoon.

TCU running back Aaron Greene (22) breaks a tackle as he heads to the end zone for his second touchdown of the game. After Greene’s two touchdowns in the first quarter, he was rested for the duration of the game.

TCU running back Aaron Greene (22) celebrates with teammates after his touchdown.

TCU wide receiver Kolby Listenbee (7) hauls in a pass in the first quarter against the SFA Lumberjacks.

TCU wide receiver Kolby Listenbee (7) celebrates after scoring a 60-yard touchdown in the first quarter against the SFA Lumberjacks.

TCU quarterback Trevone Boykin (2) whips a pass to wide receiver Josh Doctson in the first half against the SFA Lumberjacks.

TCU wide receiver Kolby Listenbee (7) turns the corner against an SFA defensive back.

TCU safety Michael Downing moves up the field to stop a run. Downing replaced starting safety Kenny Iloka in the first quarter after he left the game with a knee injury. 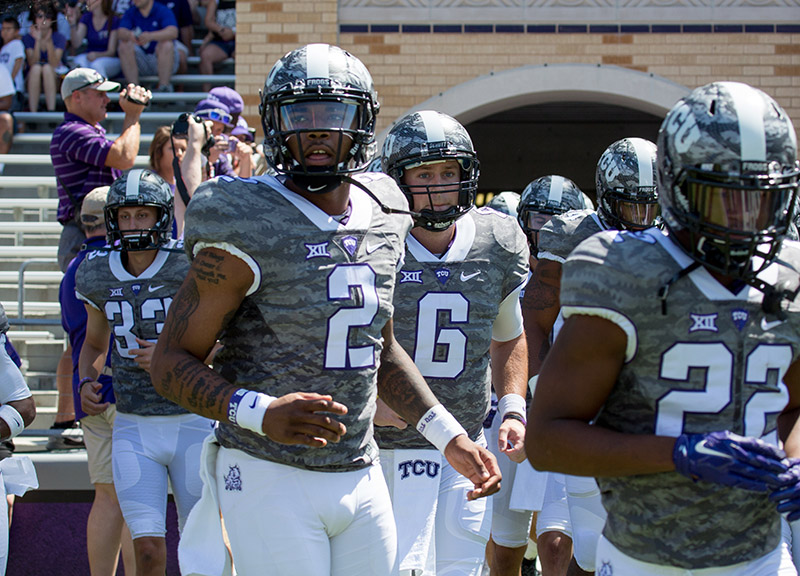 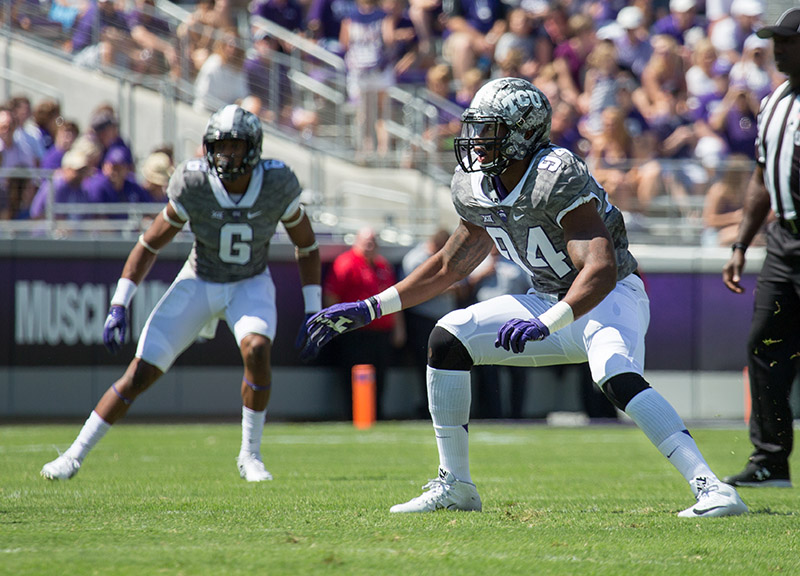 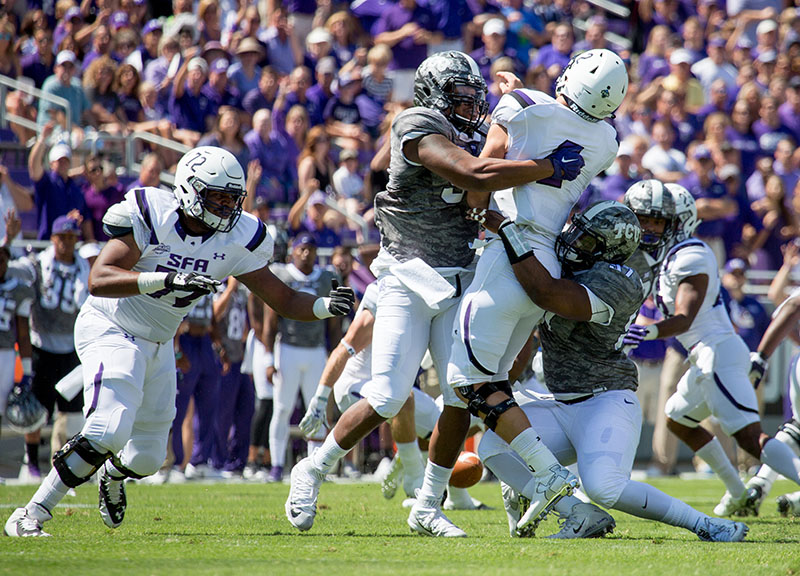 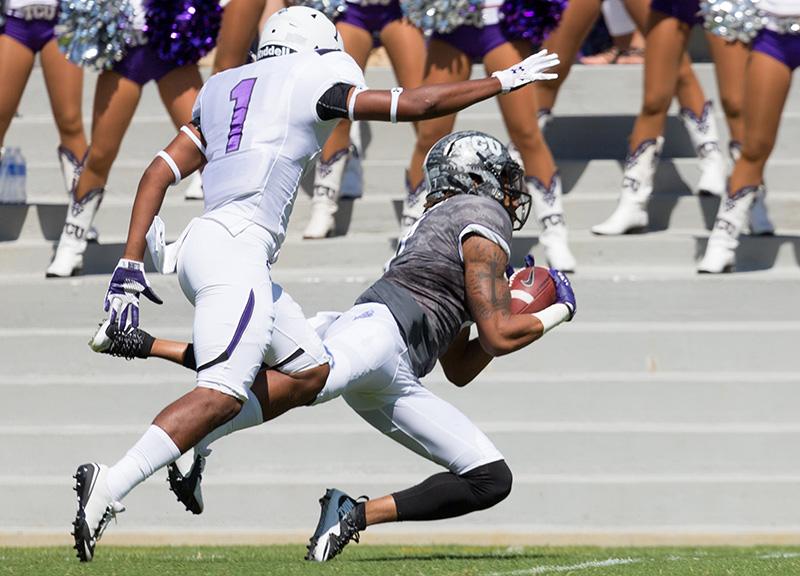 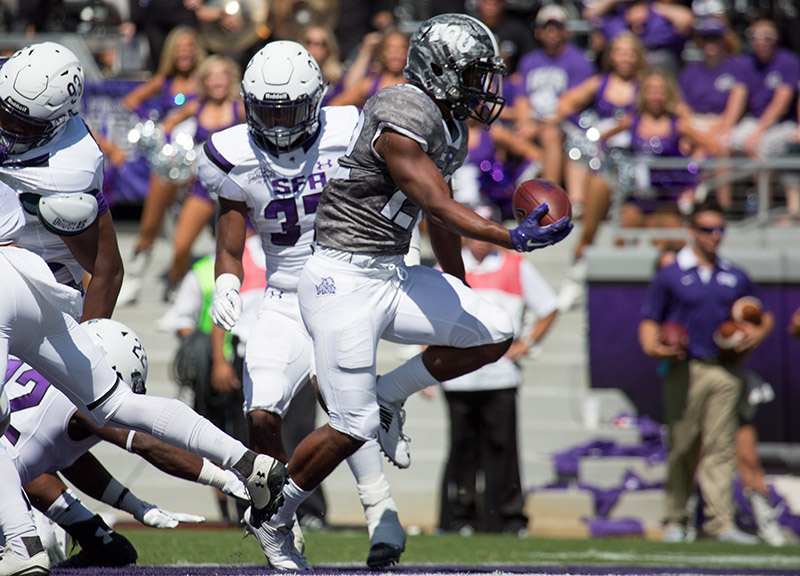 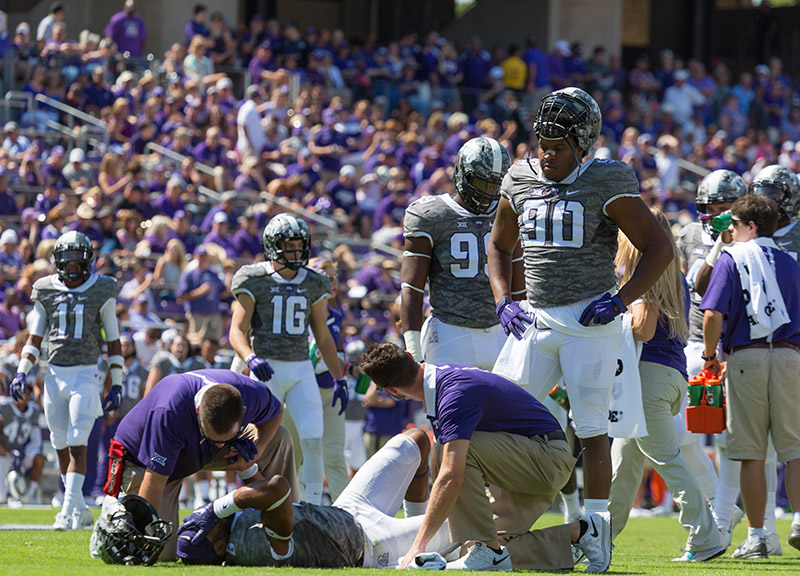 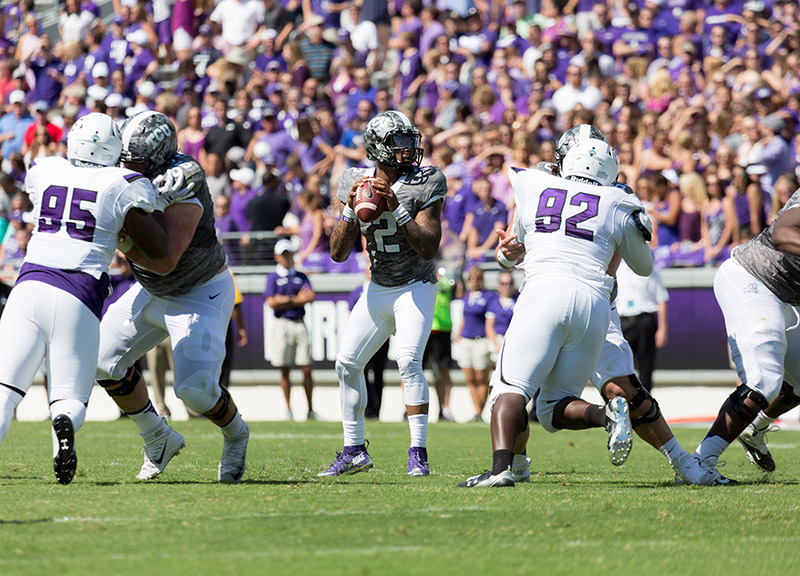 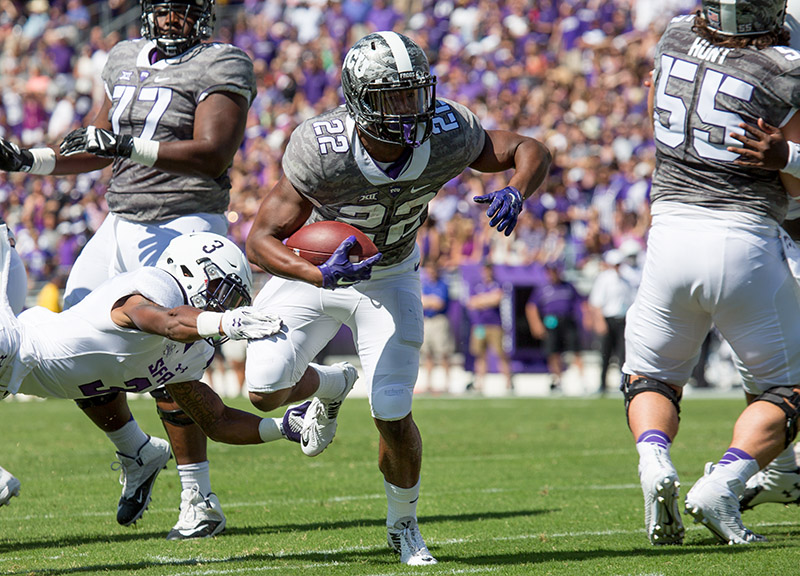 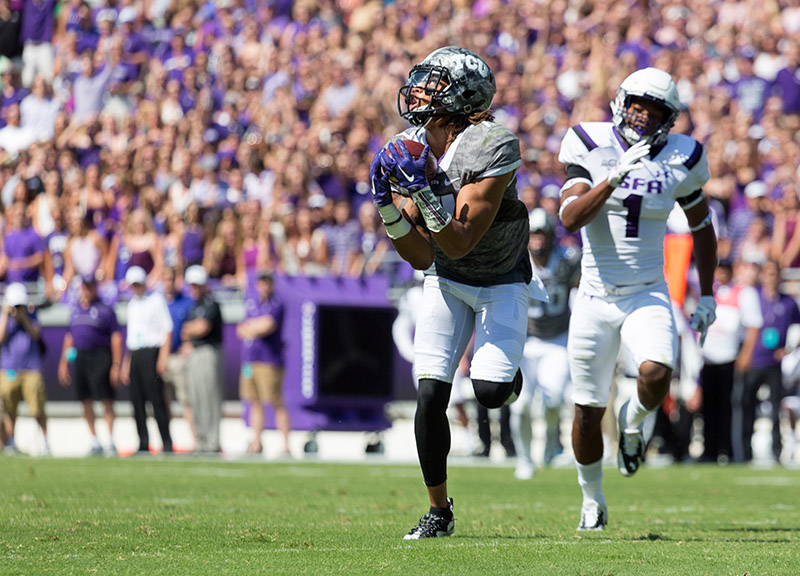 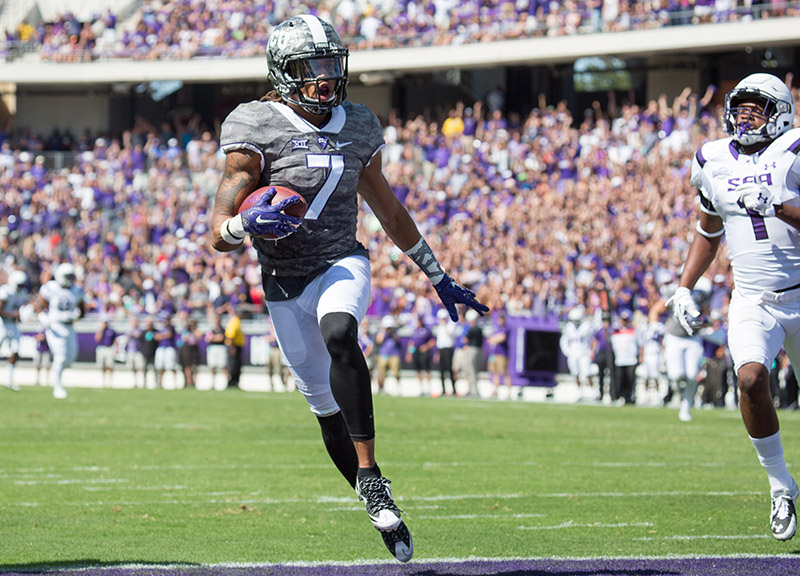 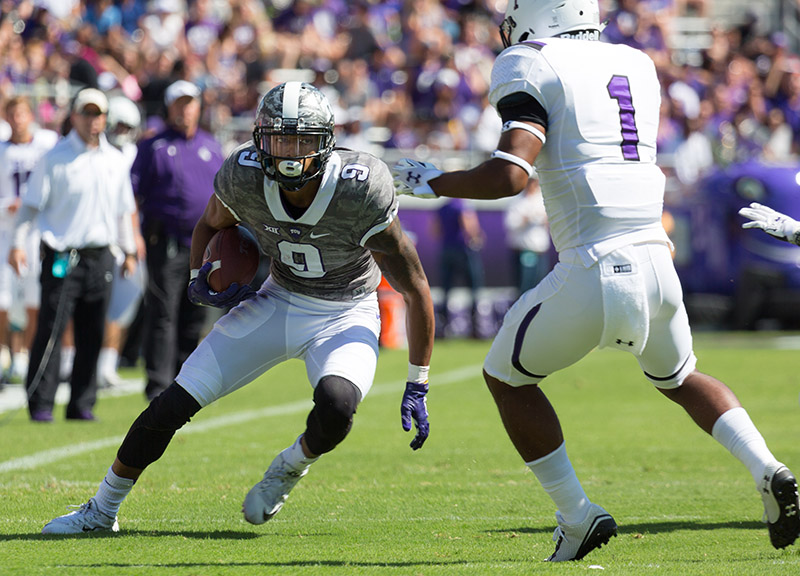 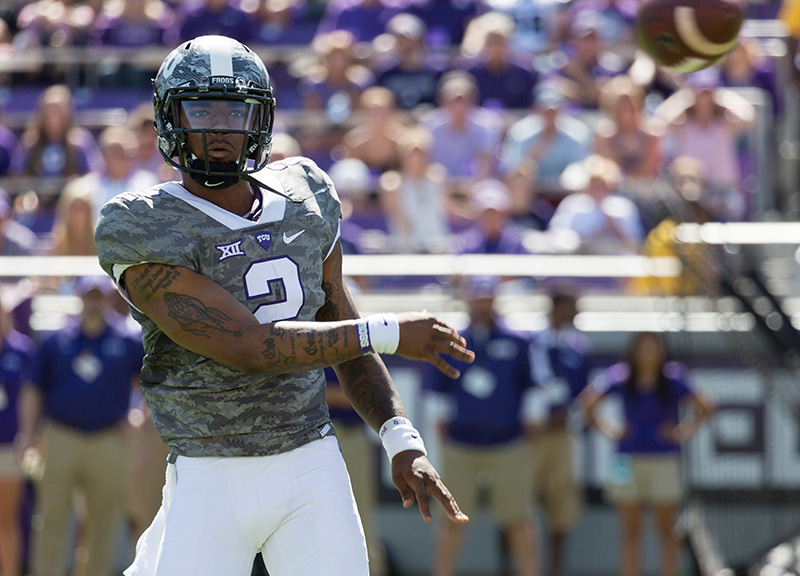 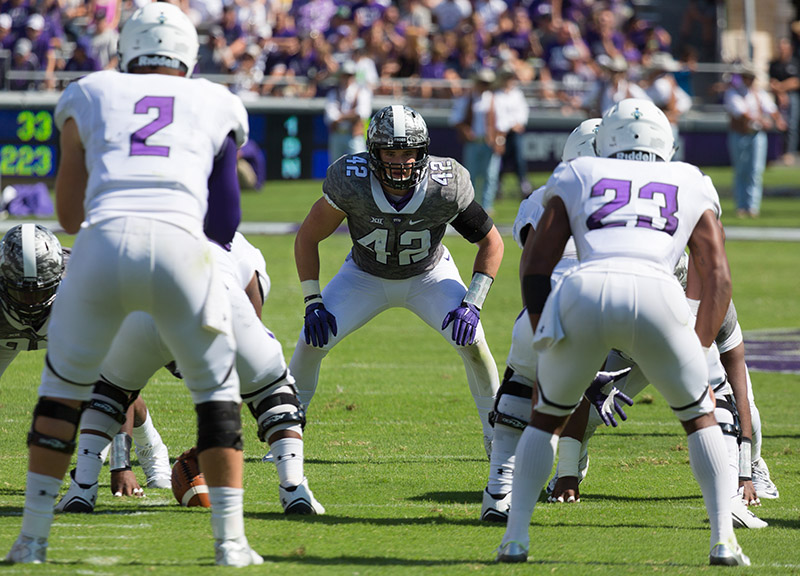 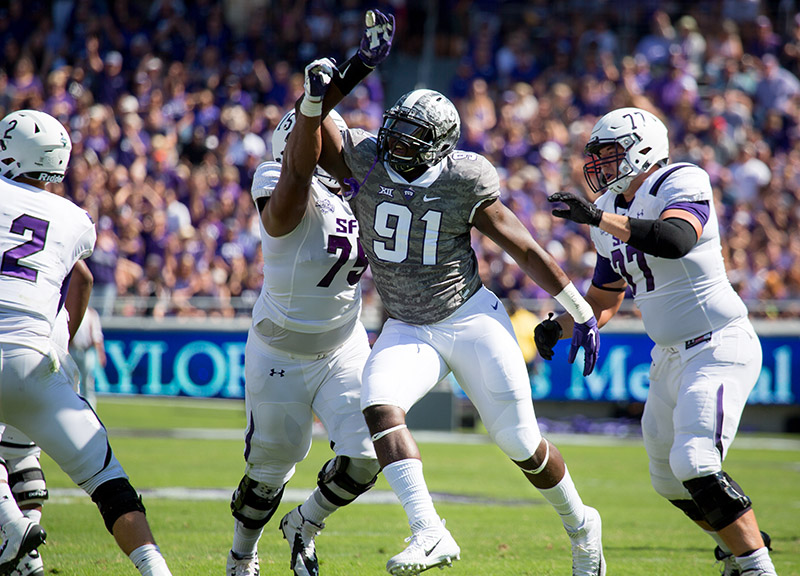 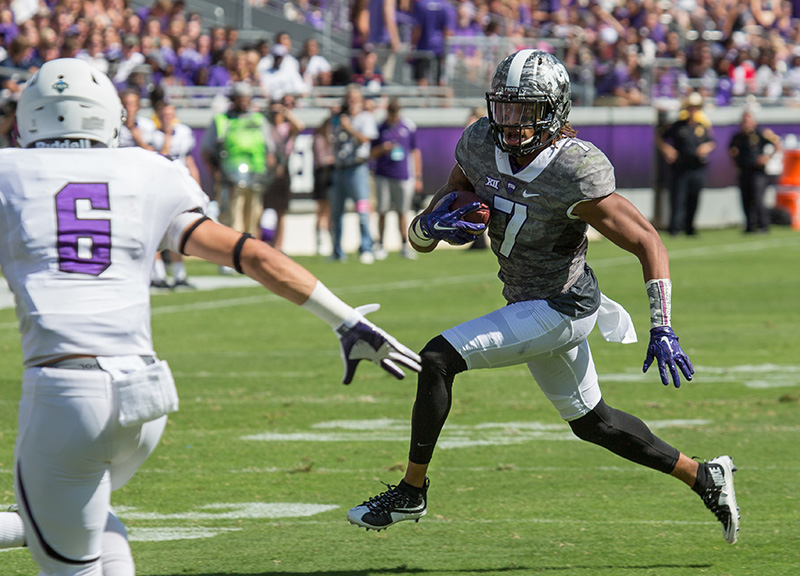 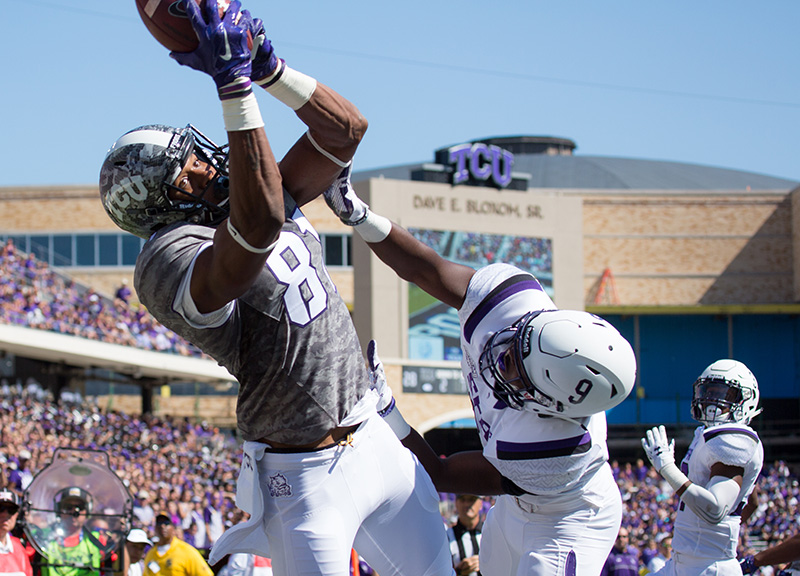 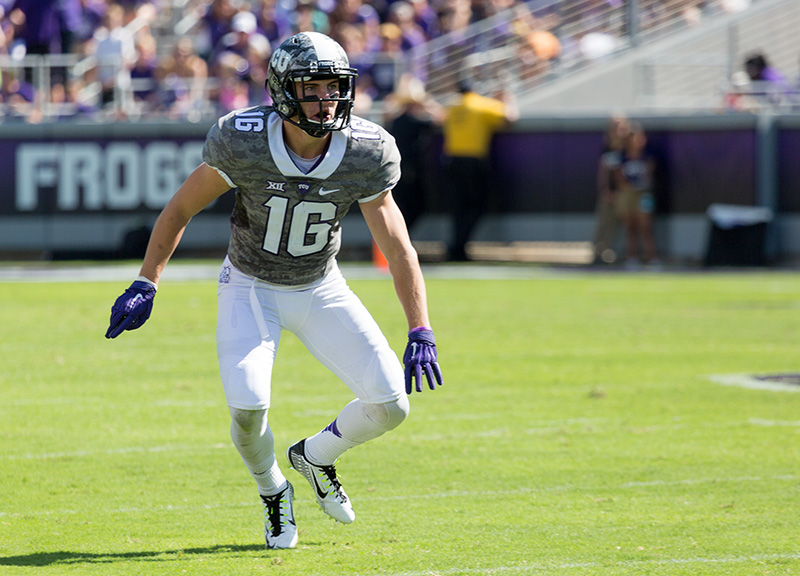