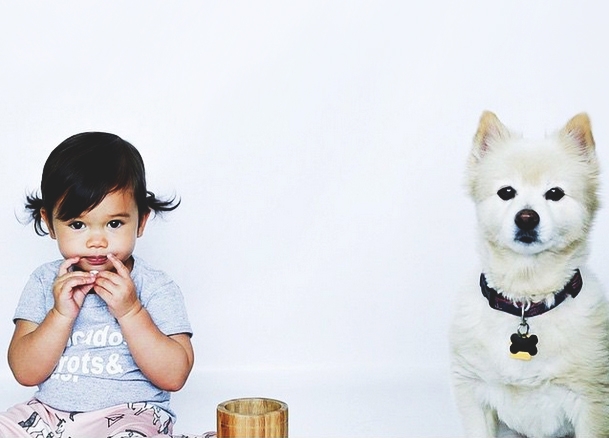 Perhaps you know Kelsey Holloway (nee McLain) from her days as the owner of ShopMieux, which, while it lasted, existed essentially as an independent version of Buffalo Exchange. If you do, then you may also know that, when Holloway had her little daughter Bailey, she decided to close that business — temporarily, at first — for what seemed like plans to re-brand ShopMieux into a children's retail concept.

Well, Holloway's since changed her mind there, too — and to very successful ends at that. Recently, she started selling baby clothes — leggings, shorts and tees — under the Bibs & Co. Organics label.

And let us tell you: She is killing it.

This picture was all the morning coffee I needed to wake me up! I ðŸ’– Jordan in her new Bibs & Co. Veggie Tee & Organic Unicorn Love Drawstring Leggings! ðŸ˜»ðŸ’•

Within the first 24 hours of launching Bibs & Co.'s web site on April 20, Holloway received over 100 orders for her adorable creations. In addition to that, she also somehow amassed more than 10,000 followers to her brand's Instagram account since launching.

A little perspective here: Holloway doesn't even use hashtags on Instagram, so it's not like she gamed the system. She hasn't really gamed anything, to be honest. She's just hand-sewing these cute little items of clothing and finding an audience. It's pretty remarkable!

So, how'd she do it? And how does she plan to keep it up now that she's also accepted a job working for someone else on top of doing her own thing? We decided to ask her ourselves to find out.

From what I've seen on Facebook, it doesn't sound like you really started sewing for your little one with the goal in mind to start a business out of it. Is that correct?
Well, the items I found in most baby departments were either ugly or expensive. When I started sewing Bailey's clothes, I'd post photos of them. I didn't expect the huge positive feedback I received. I started selling to Facebook friends first before deciding to make it a real thing.

How experienced of a sewer were you prior to when you began sewing for Bailey?
I could hand stitch, but had almost no experience on a machine. I took the Beginner Serging class on Craftsy. Craftsy taught me.

What sort of planning did you do before you started Bibs & Co.? How long did you plan for?
I just kind of went for it. My first launch attempt was a bust. I had zero sales. Then I switched fabrics and all of the Instagram moms went nuts.

On Facebook, you said you sold 102 pairs of bottoms in your first 24 hours, but I know you've only had six sales on the brand’s Etsy shop. What do you think contributed to such a quick, positive response on bibsand.co and not on Etsy?
People find my things on Etsy accidentally. There [are] thousands of vendors to choose from on there. There's an option to promote your products on there to be listed higher in search rankings. I might try that sometime. Right now, I'm probably on the billionth page. But I really like the aspect of having your own website with your own branding. It attracts customers. A customer wants to feel connected to a brand.

I noticed you've also received quite the response on Instagram, as you reached 10,000 followers in just about two months. I also noticed, however, that you don't use a lot of hashtags. What do you think has led to such a large social following so quickly?
I should probably start using hashtags, but I'm so OCD that I think hashtags look so messy. I do research hashtags, though. I go through popular baby hashtags like #instababy #igkids #bootd and make friends with the moms.

How are your sales now? How have they changed since your grand opening?
They are steady, but not as crazy as the first day. People get really excited over new product launches. My next big “wow” launch will be a pair of patriotic shorties for the Fourth of July.

When you get a large number of orders within a short time frame, how do you fulfill the orders? Do you hire contract sewers to help? What other, if any, help are you receiving?
I'm still trying to figure this out. I wasn't expecting to get so many orders. My goal was to get five orders. I have found a few small batch cut and sew manufacturing shops in the Dallas area who are ready to help out when needed. It's nice knowing that I don't have to go it alone. At the moment, I'm keeping everything in-house — literally in my house. It takes me 15 to 17 minutes per item, and I quote a 2-3 week turnaround time.

Have you received any interest from retailers who are interested in the wholesale side of your business?
I have a couple of baby boutiques interested. I can't say who until it's for sure.

I know you recently accepted a job with Clotheshorse Anonymous as head of engagement. What can you tell me about that?
I'll be responsible for finding and acquiring new customers for both their physical and online stores.

I know you say you like to be busy, but that position is full-time! How will you handle working for someone else while also running Bibs & Co., which appears to be thriving?
My family and friends ask me this everyday! I haven't figured out an answer yet. I just know I'm going to give both my all.