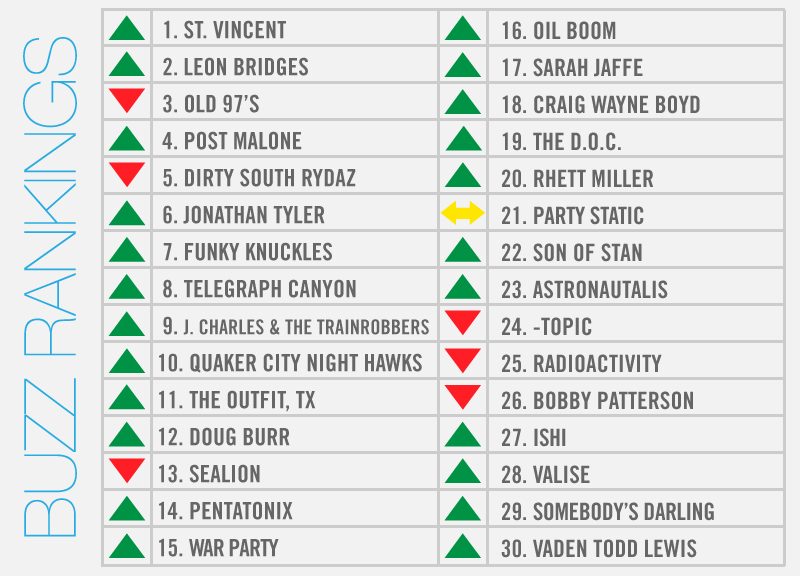 This Week, St. Vincent Is The Sun, The Moon And The Stars.

One of the fest's biggest anchor performances is the sold-out collaborative work between St. Vincent and the Dallas Symphony Orchestra that takes place this Sunday at the Winspear Opera House. (It's been moved inside from Strauss Square because of weather concerns.) And, even for an artist that's previously collaborated with interesting musicians such as David Byrne, this performance with the DSO should prove to be one of the coolest single performances St. Vincent's ever participated in.

As such, the Dallas native finds herself atop our weekly, local music power rankings for the fifth time — and her second time atop the heap in 2015.

Really, though, it was a big week for a number of onetime North Texans: Rhett Miller released his latest solo LP this week; Post Malone announced his first official Dallas show; Astronautalis released a Doomtree collab from his upcoming album; Craig Wayne Boyd was dropped from his record label; and Somebody's Darling is returning home to play this weekend's inaugural DMD Fest.

Speaking of that festival coming down the pike this weekend: Jonathan Tyler, Ishi and Jessie Frye are among the other locals that'll make appearances.

Meanwhile, a number of other bands made this week's list after drinks from Off the Record's new summer cocktails menu were named in their honor. Those would be Sealion, Bummer Vacation, Oil Boom, Son of Stan, Party Static, Sarah Jaffe, The Roomsounds and War Party, many of which were still riding high off the buzz of just having played last weekend's Homegrown Fest at The Bomb Factory.

Speaking of big shows: the DSR crew earned some shine with its comeback show at Trees, as Doug Burr and Telegraph Canyon managed to sneak in their performances at Untapped Fort Worth before that sucker got rained out. Also not to be forgotten? Leon Bridges' opening turn at the Lord Huron's South Side Ballroom show.

Elsewhere: Pentatonix made a cameo in Pitch Perfect 2, The D.O.C. found his old Platinum records in a local pawn shop and Vaden Todd Lewis takes a solo turn at Shipping and Receiving this weekend.