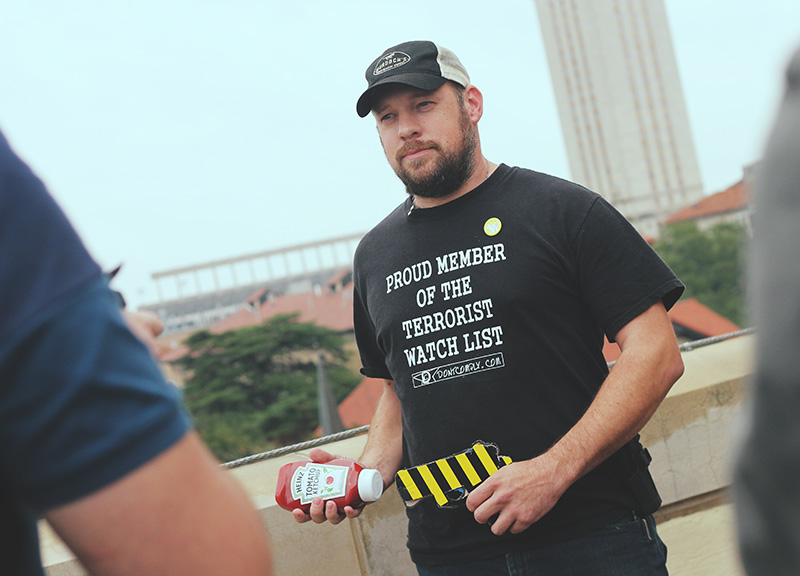 Dallas Gun Activists Staged A Mock Mass Shooting At The University of Texas at Austin on Saturday.

The mock mass shooting that was staged at the University of Texas down in Austin on Saturday has already been covered extensively elsewhere, unarguably earning itself more national attention than it in retrospect likely deserved. I got swept up in it all myself, covering the event for The Daily Beast.

I really don't think too much more needs to be said — take away the 50-plus media types covering it, and the event really wasn't as big as all of its coverage made it out to be (also, somehow, the demonstrators and counter-protesters each left claiming victory) — but I think there are a few things worth noting about the event that I haven't yet seen mentioned much elsewhere.

• At its strongest, the group staging the mock shooting (and the open-carry walk that preceded) it only numbered 11 people. The fart machine- and dildo-wielding counter-protest group (one of three known counter-protest entities, but easily the most vibrant) had ten times that many members.

• It was primarily North Texans in that gun-rights, bunch; I spoke with six of those participants, and five of that group called the Dallas-Forth Worth metroplex home. Specifically, these demonstrators claimed Dallas (x2), Fort Worth, Garland and Lewisville. (The sixth claimed Austin.)

• The two organizations behind the event — Don't Comply and Come And Take It America — are both based in North Texas. And to be clear: This stunt, which argued a number of things but mostly the dissolution of gun-free zones, was run specifically by these two groups. Some participants may belong to other gun groups, and some of the quieter ones may have not necessarily been on hand to represent those specific organizations, I don't know — but I didn't hear any others mentioned. That's interesting if only because this group has had a hand in some highly attended similar events in the past, including 2013's gun rally at the Alamo, which drew hundreds to San Antonio. Organizers told me they invited other Texas guns rights groups to participate in Saturday's event, but those offers don't appear to have been enthusiastically accepted.

• I couldn't confirm whose idea it was to host the shooting at UT (or at any academic institution, for that matter), but everyone I spoke with credited Tammy Kootz of Lewisville with coming up with the idea of staging a mock mass shooting.

• One student protester I met, freshman Graham Houpt of Allen, said he made time to protest in spite of having to take two finals that same day. First of all, that's some dedication. Second of all, any teacher who forces a Saturday final is brutal.

Also, I took a whole bunch of photos from throughout the day. Below, I've posted some extras, with captions for context.

Don't Comply and Come And Take It America founder Murdoch Pizgatti (a confirmed alias) poses atop an off-campus parking garage with the ketchup and cardboard guns that he'll use later in the afternoon during his group's so-called “mock mass shooting.” In the background is the UT clock tower, notorious as the site of an on-campus mass shooting 50 years ago, where, after murdering his and mother, 25-year-old Charles Whitman killed 14 people and wounded 32 others with various rifles before being subsequently killed himself by an armed Austin police officer.

The participants in the march and staged shooting gather away from the media to go over their game plan one final time.

UT junior Karthik Raja, 20, of Odessa, wanders over from his nearby apartment, fresh bag of popcorn in hand, to see what the to-do is about. “I got a couple hours before the basketball game starts,” he says. Later in the day, at the nearby Frank Erwin Center, the Longhorns officially welcomed in the era of new coach Shaka Smart by beating the No. 3-ranked University of North Carolina Tar Heels 84-82 in a thrilling game decided by a buzzer-beater.

Garland's Matthew Short (left) and Fort Worth's Heather Hill (second from left) join the Dallas-based Pizgatti and others on an open-carry march down Guadalupe Street.

22-year-old Baylor Morrison of Fort Worth greets the gun-rights groups with a sign of his own and a group of 30 that he gathered. “The use of UT as backdrop for a mass shooting is disrespectful,” he says, specifically referencing the clock tower shootings of 1966.

After ditching counter-protesters and most of the media by announcing an hour-and-a-half-long lunch break, the gun activists stage their mock mass shooting on a sidewalk at the intersection of 27th and Whitis, surrounding by UT campus buildings. Earlier in the day, organizers had told media members the event would be located at the campus' West Mall. Said Pizgattit of that switch-'em-up: “You don't get a flyer with a location and a time for a mass shooting.”

Pizgatti reads from a script, narrating the mock mass shooting.

Orsek squeezes Heinz 57 Variety ketchup onto his “victims” to represent blood. Yells a frustrated Short at one point between the four acted-out scenarios: “Just don't squirt any more ketchup on me!”

Demonstrators chalk the outline of one of their sketches' “victims.”

This guy isn't really dead. He is pretending. I didn't catch his name, but he closed his eyes after starting to get up and then noticing that I was talking a picture. He is one hundred percent definitely posing for this shot.

A demonstrator leaves out the L in a scribble promoting Don't Comply's web site.

Fart-loving counter-protest leader Andrew Dobbs (32) of Austin, leads chants against the mock mass shooting after arrival mere moments upon the performance's conclusion. Shouts the group: “We fart in your general direction!”

There's an apostrophe missing in this sign. Can you find it?

Austin PD looks on. These three didn't smile once, not even at the farts.

This mostly media members interviewing anyone they can find in a scramble after most of them realized they missed the actual event they had initially planned to over.

Amidst the many interviews taking place around her, Hannah Pommershein, program coordinator at the nearby Episcopal Student Center, cleans up the chalked body outlines left behind by the staged shooting. 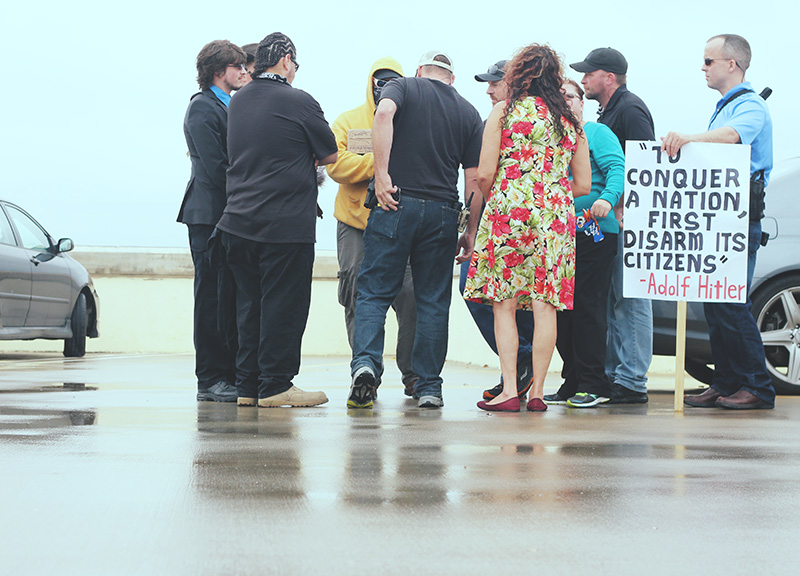 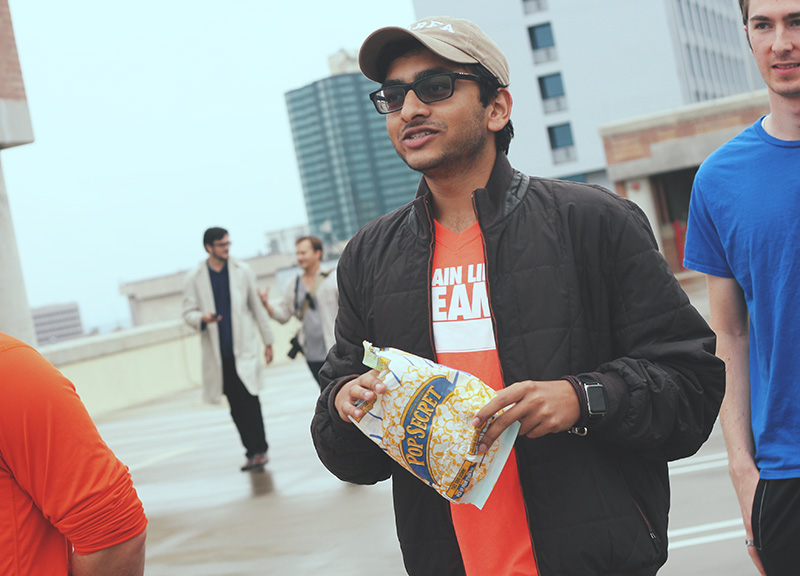 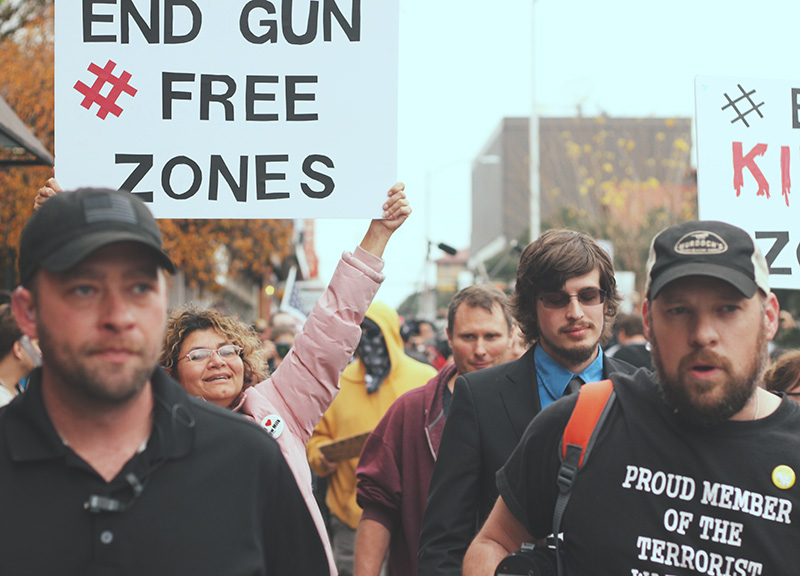 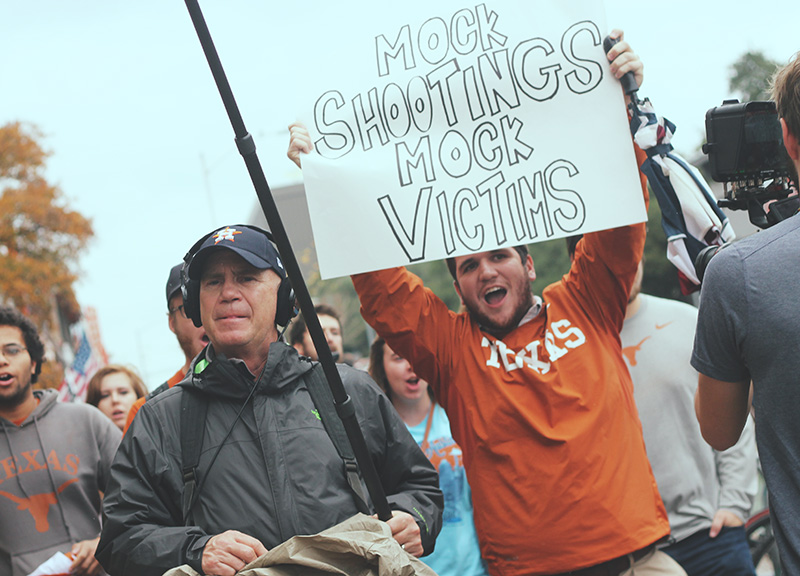 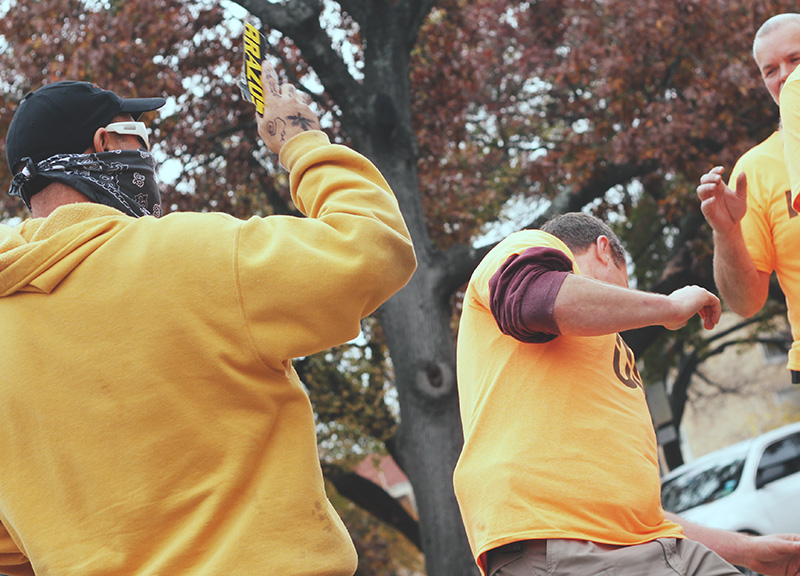 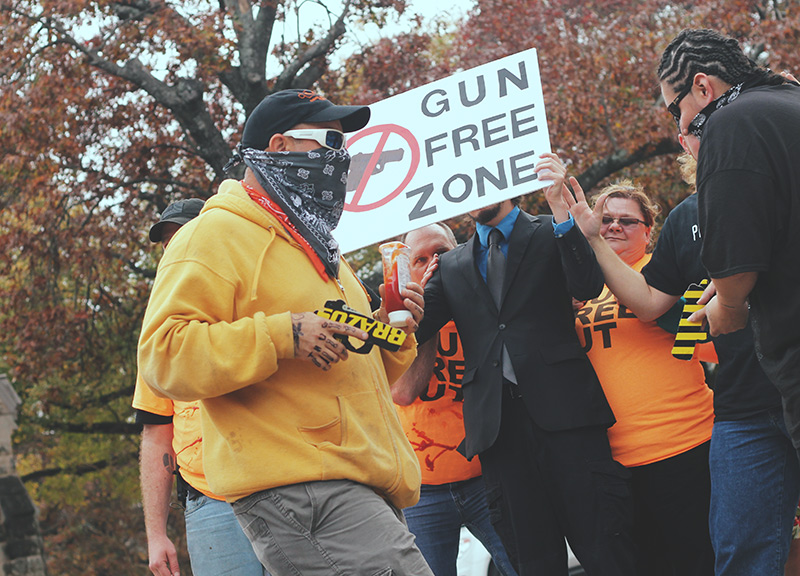 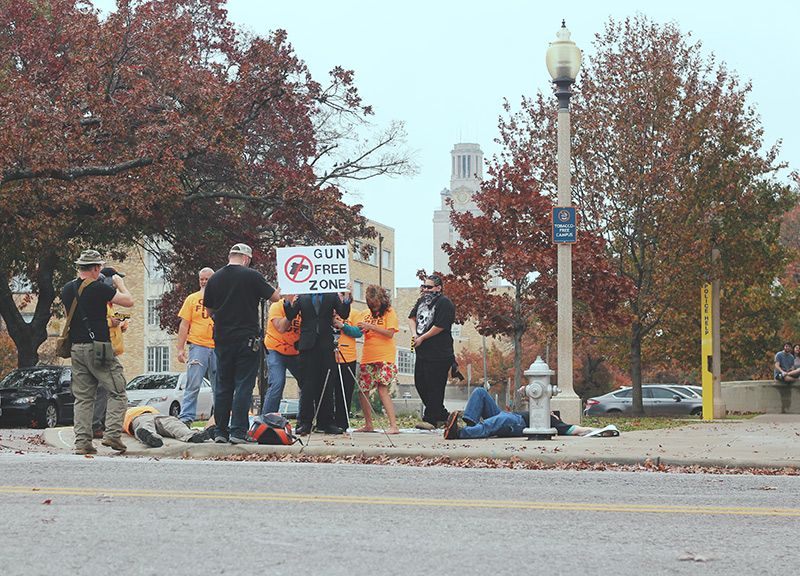 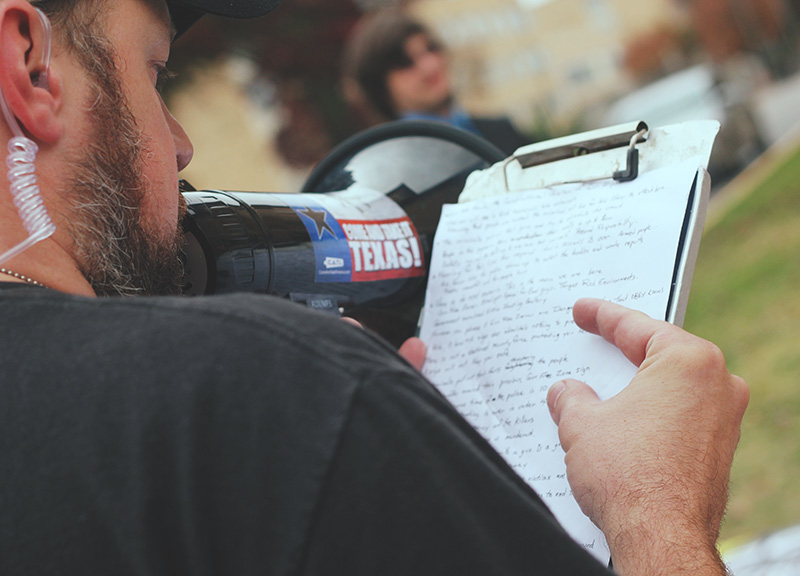 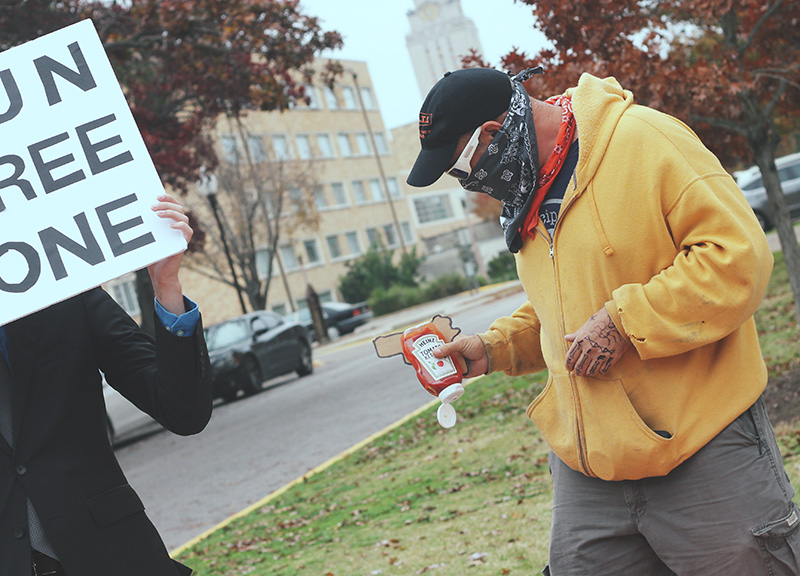 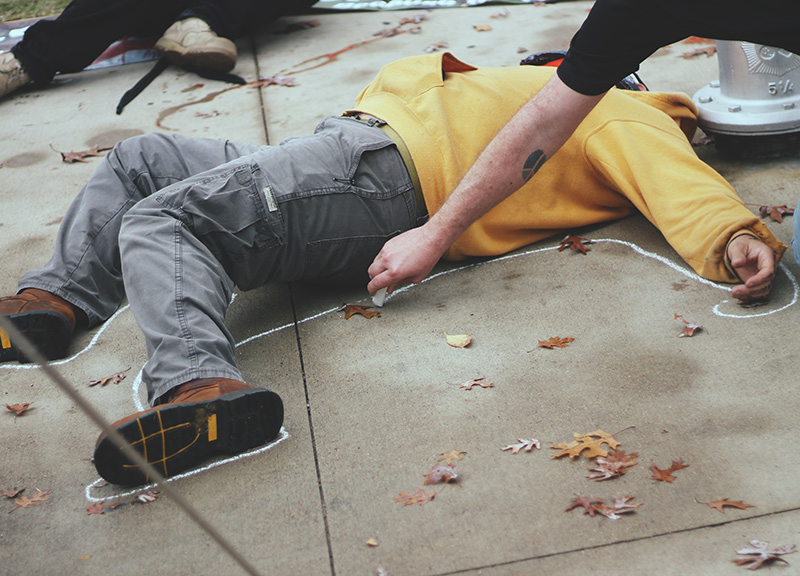 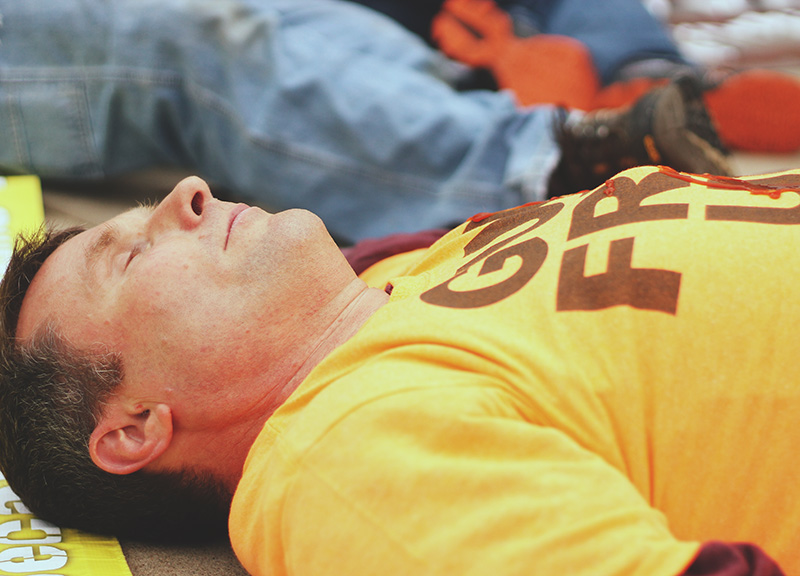 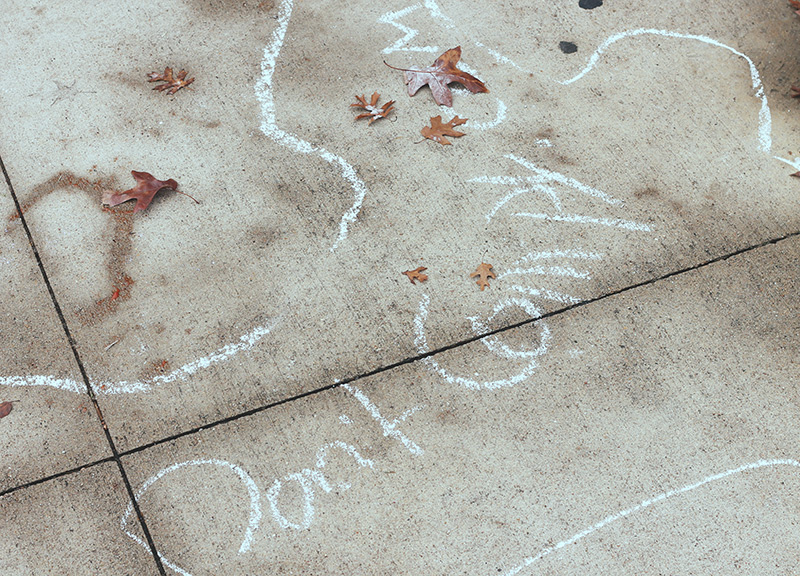 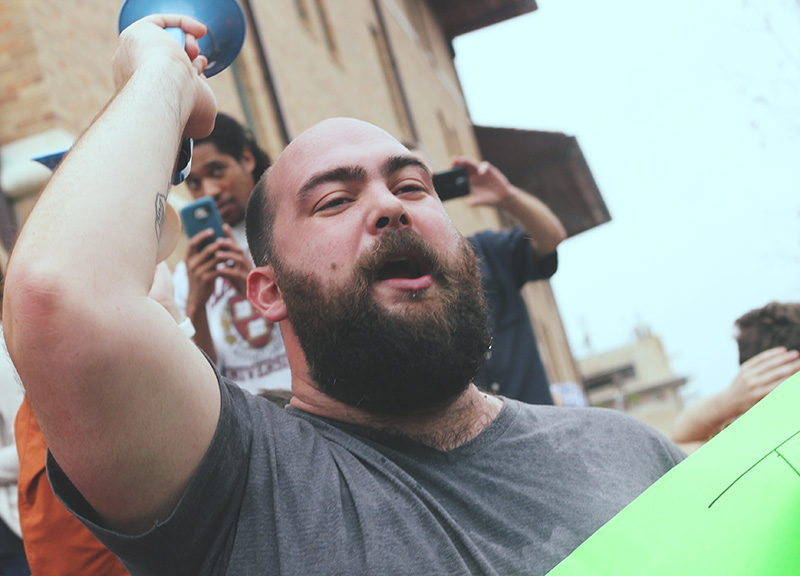 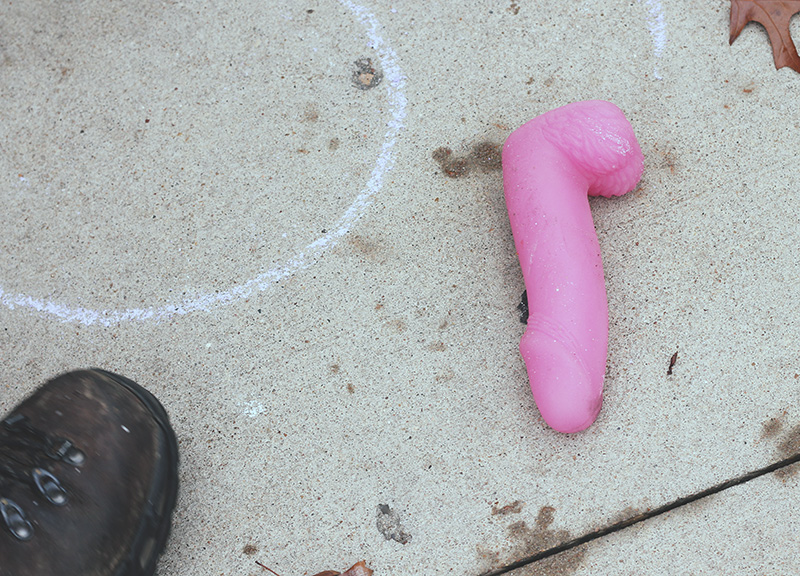 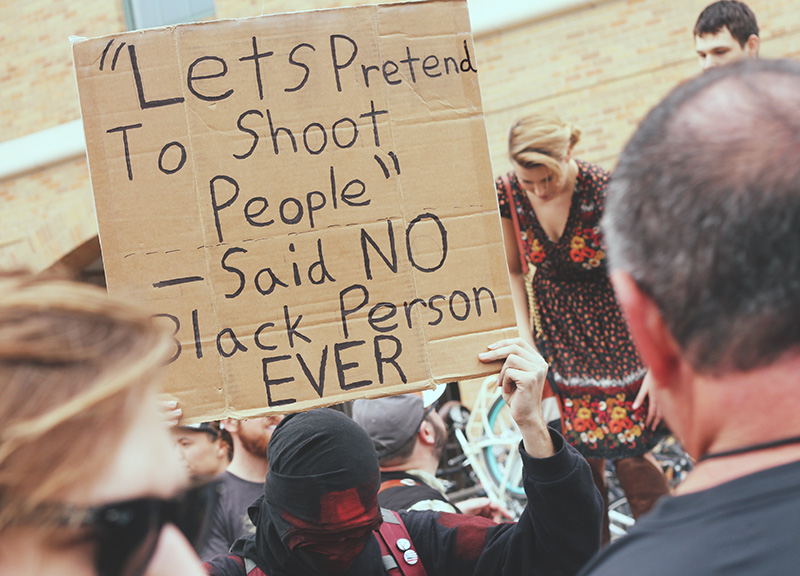 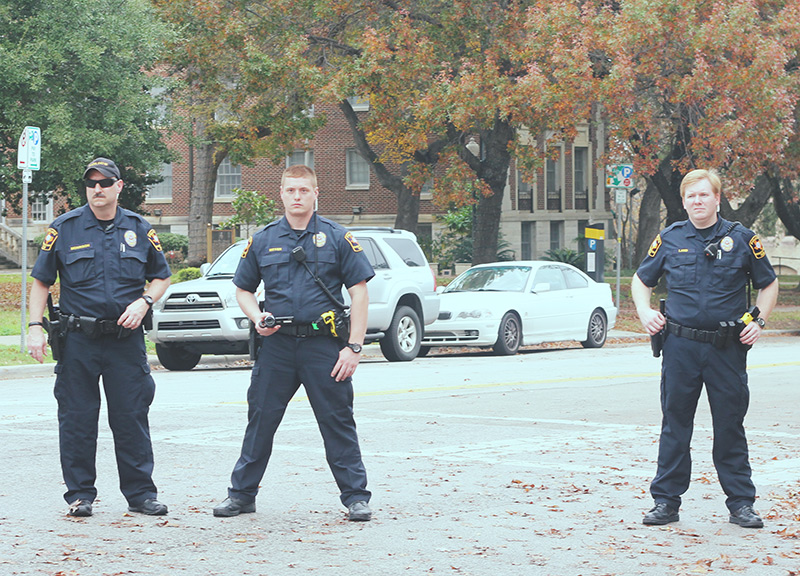 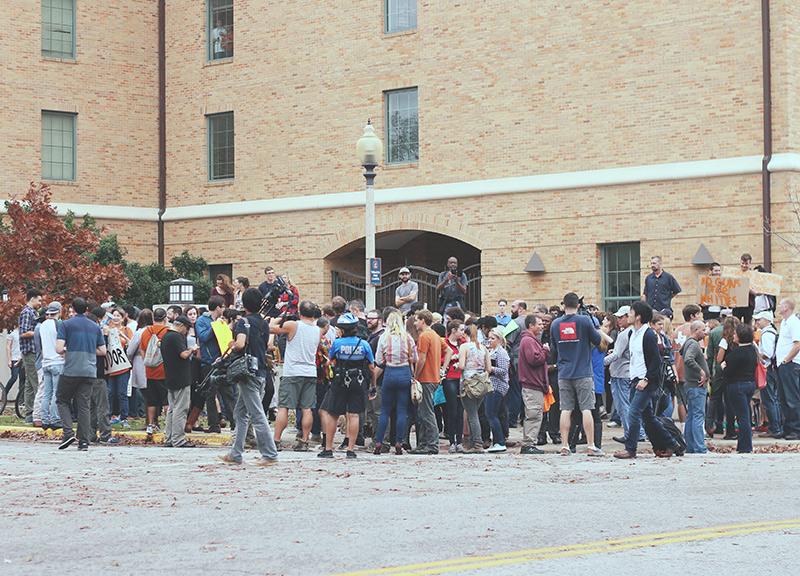 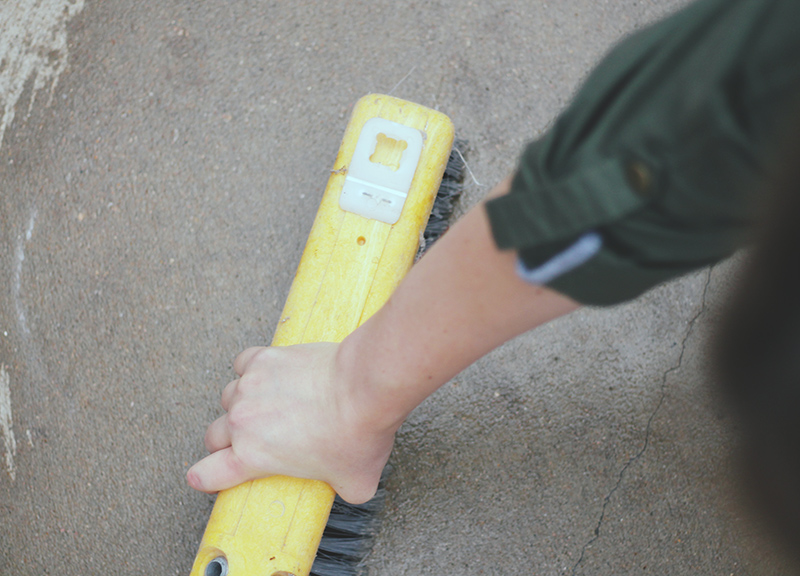