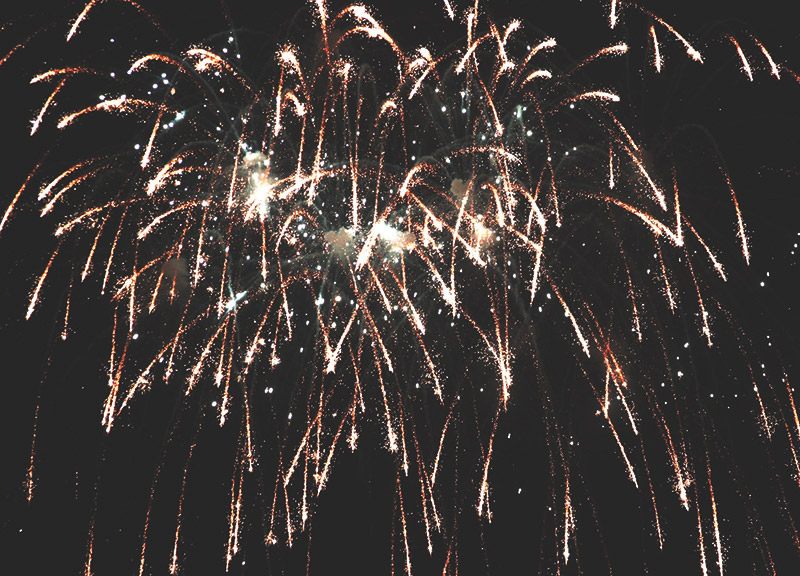 Everything You Need to Know About Rooftop Fireworks-Watching This Fourth Of July.

Over the past couple of centuries, it's become a huge American deal for us to gather in large groups and watch things blow up.

It's why we still reluctantly show up en masse to watch whatever the latest Michael Bay film happens to be. It's why websites like this one exist at all. It's why we've even known folks to take off work and watch buildings get imploded.

Hey, to each their own.

At least, when it comes to our nation's Independence Day, we can present a unified front: Few things compare to cracking open a cold one (in an American flag can, of course) as we watch fireworks light up the night sky and to celebrate our country's freedom. It's just a grand ol' time.

To that end, the big question heading into next week is less if you're going to watch fireworks this Fourth of July, but where. Sure, you could always take the route of former NBA star Gilbert Arenas and hoard piles of your own mini-explosives. But that strategy comes with its own set of risks.

A better suggestion? Finding a building with rooftop access so you can properly catch this year's fireworks displays.

Don't have access to any roofs? Don't worry about it. The way we look at it, you've got two options: You can either pick a building with rooftop access and act like you're supposed to be there, or you just make sure that nobody knows you're there at all.

In either case, if you follow the below advice, you'll have a thrilling perch from which to enjoy multiple fireworks shows going down at once — including ones as far away as the suburbs. Really, the Fourth is the one time of year when North Texas' lack of topographical variation isn't such a bad thing.

Scout a Location.
Look around. Tall places are literally everywhere in Dallas. There's no shortage of residential lofts, hotels and other tall places to explore. And while they all have roofs, they don't all necessarily dig folks hanging out on them. Not up to the risk? Here are a few risk-free suggestions to look into for your possible fireworks-watching vantage point:
• Parking Garages. While not quite as abundant as skyscrapers, there are at least a few parking garages around town that are just as tall as some of them. The other perk here? There's no climbing involved to get to the top; you simply drive your car all the way up.
• Reunion Tower. The restaurant in this skyline fixture has a pretty nice view, and, unlike other indoor options, the building rotates for that full 360 degree firework experience. One small downside? Things can get a little pricey here, so maybe just order a few drinks and tip the waiter well to stay in his good graces. A potentially bigger issue? The restaurant's closed on the Fourth. But it is open on the Third, and there are at least a few suburban showcases set to go off that night that you might be able to catch along the horizon.
• The W Hotel. The hotel's rooftop pool is open to the public on Sundays, but we don't know of too many fireworks shows going on then. Don't worry: This is one place that's not too hard to sneak into at all.

Do Some Reconnaissance.
Whether you go the legit route or opt to sneak on a roof that's typically off-limits to the public, you'll probably want to do a trial run beforehand. Is the building normally locked? That's obviously something to consider. Whether you're going to need to make friends with a keycard holder in advance or you're going to need to sneak a peek at somebody punching in a door code, you'll definitely need to do this before the big night. Furthermore, once inside, do you even know how to get to the roof? No matter what you encounter on your soft run, you'll want to be prepared for it well beforehand. Whatever happens, just remember: Confidence is key. Act like you're supposed to be there and nobody will give you shit.

Come Prepared.
Rooftops — especially the kind you're not supposed to be on — aren't the most comfortable places to pop a squat. Bring along a blanket, a chair or some sort of barrier to put between you and the sandpaper-like ass-torture that is roofing tiles. Extra drinks and maybe some speakers to plug into your phone probably aren't bad things to have either.

Stay Safe.
Watching fireworks from a distance is inherently safer than being the guy forced to light them. At the same time, though, being tipsy on a dark roof at night isn't exactly the safest thing either. Bring some pals and be sure to watch out for one another. And while this should go without saying, if you've had a few too many, maybe you shouldn't stand so close to the ledge.

Don't Get Caught.
While we've given you plenty of legit places to hang out this Fourth, we understand that the off-limits perches are often the more exciting places to celebrate. We get it; they're way less crowded than the officially-sanctioned rooftop patios. If you do opt to live dangerously, though, just remember to tread lightly, wear dark clothes and interact with your comrades as quietly as possible. You're on a covert mission. And if you do happen to get busted, remember: You didn't get the idea from us.