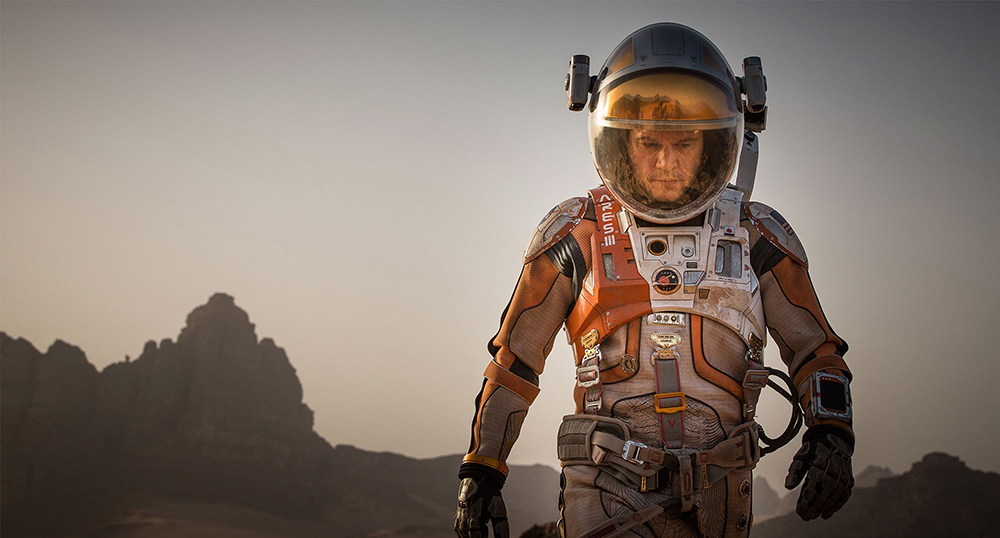 The Martian Is Enthralling, Empathetic and The Year's Best Blockbuster.

So the best blockbuster of the year arrived later than anticipated.

But at least The Martian was worth the wait. Enthralling, entertaining and empathetic, it’s got everything you’re looking for in a movie, all the while reminding us why outer space — and Mars in particular — holds our collective imagination so captive.

The Martian wastes no time in stranding its lead, astronaut Mark Watney (Matt Damon in one of his best performances), on the red planet. A storm separates him from his space exploration science crew, which then takes off and heads back to Earth, assuming the worst. Improbably, though, Watney survived — and, well, he just goes right on surviving thanks to unmatched ingenuity and, more importantly, relentless positivity.

Unlike Cast Away or Gravity, which also stranded great actors from the rest of the world, The Martian's protagonist is defiantly upbeat for a character with limited food, air and water. Remarkably, this never comes off as phony. What makes The Martian so great is that every setback is presented as a math problem, something that can be figured out eventually through blood, sweat and tears.

Matt Damon isn't the only great actor in the cast, either. No, The Martian is filled with them. Back on Earth, Jeff Daniels is the pragmatic head of NASA. After discovering that Watney has survived, he’s skeptical of sending a rescue mission. In trailers, this is presented as villainous; in the film, he's merely a realist who knows that one dead astronaut is preferably to an entirely dead crew.

That crew is led by Jessica Chastain, who I'll just go ahead and declare as the best actress working today and who shows off that effortless determination well here. Michael Pena joins her and continues to steal every scene he's in. Kate Mara, Sebastian Stan and Aksel Hennie are also great in smaller roles. Also back on Earth? Chiwetel Ejiofor, Mackenzie Davis and Kristen Wiig. Even Donald Glover has a great cameo as a sarcastic astrophysicist.

It’s hard not to compare The Martian to last year's Interstellar, which (spoiler alert?) also featured Matt Damon awaiting rescue on an inhospitable planet. Both movies get the science, however theoretical, right enough. But where Interstellar's descent into gooey metaphysics (love, man) kept it from greatness, The Martiancomes by its emotions honestly. Watney is completely engaged, even when he's talking to himself. And you can see why: The Martian actually captures why we're so fascinated by space exploration, and why it remains so important.