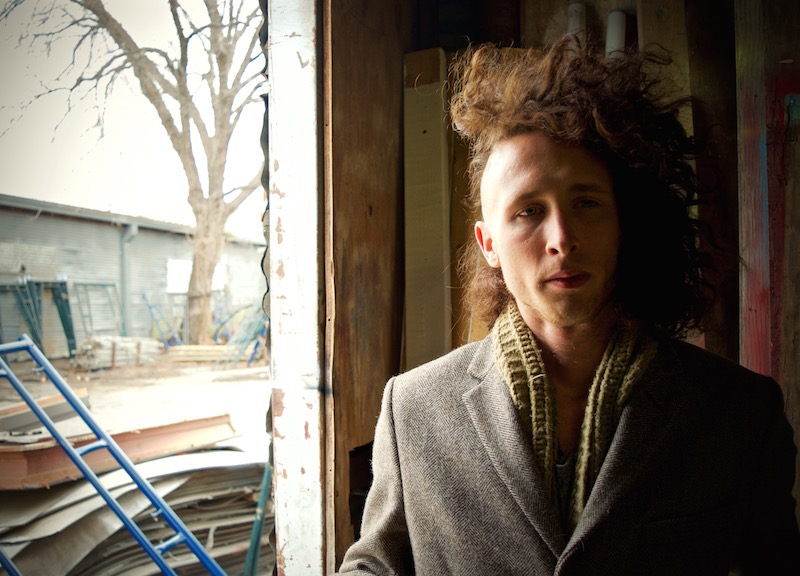 After Almost Dying, This Dallas Artist Is Travelling The Country And Giving His Art Away For Free.

The walk to his studio space passes through an industrial yard that’s littered with metal scraps and wooden pallets. Dirt is kicked up in the air by a forklift cruising to its next pickup.

Matthew Brinston walks with his hands in the pockets of his long, brown woolen coat, his curly hair blown across his face. He pushes his hair away from the side of his head to reveal a long S-shaped scar that trickles down from the top of his head to the front of his right ear.

It’s that scar to which he owes his entire art career.

Just over two years ago, Brinston nearly died in a serious motorcycle accident. Actually, he did die for a few moments. His neck was broken and a mass of blood filled the inside of his head. The doctors at Baylor University Medical Center carved that S-shaped incision to alleviate the pressure of the hemorrhage.

It was touch and go there for a second. Friends, family and friends of family immediately began praying for his survival. But it was one prayer in particular that Brinston credits with his recovery. A friend of his brother-in-law — a man Brinston has never met, and doesn’t want to, for the sake of mystery — prophesized Brinston’s future.

“This guy that you asked me to pray for, when I was praying for him, I heard he’s going to influence a lot of people with his artwork,” Brinston has been told the mystery man said at the time.

It was an especially odd prediction given that Brinston had zero background in art. He had never painted, just made music. In a year-and-a-half since his accident, though, Brinston has not only learned to paint, but he has already had his works displayed in many galleries around Dallas, including the Janette Kennedy Gallery, The Ant Colony and The Misfit Gallery. He has also had solo shows at the Mokah Gallery and, most recently, at the WAAS Gallery with his show “I Wish I Were Me.”

Next week, Brinston will head to Los Angeles to show his paintings at the California-based arm of the WAAS Gallery, NRG Recording. The most remarkable aspect of that show is not the destination, though; rather, it’s the journey.

On his trip, Brinston plans to drop 20 of his paintings off in random public places across the country, from the Trinity River to the East Bay, like a snail trail of charcoal, paint and canvas. Find one, and it’s yours to take home. The project is aptly named Free AF, because his fine art paintings, reminiscent of a duel between Picasso and Basquiat, will be free as fornication.

“I kind of like that it goes against all gallery standards,” Brinston says. “They don’t like the free art — like, there’s no purpose in it. It’s not what people expect. They don’t expect to see a piece of fine art sitting on the ground, on the street or on the sidewalk.”

There is also an element of mystery behind the conception. No one ever knows where he’ll drop off his next piece until he announces the location on his Instagram. Even if his pieces aren’t picked up — as is likely in the Middle-of-Nowhere, Arizona — he wouldn’t be disappointed. He’s not in it for the money or even the fame. He just believes that he has a higher purpose.

While in the hospital, he suffered from manic states of anger and depression, and experienced hallucinations. He dreamed of meeting Jesus Christ in heaven, only to discover that it was not his time to go, that he had some work left to do on earth.

Before his accident, Brinston admits that he was a bit of a miscreant. He used drugs, depended on alcohol and treated women unfairly. He has since sworn off alcohol and hard drugs, mainly because he could end up on the floor in a seizing fit, and that’s not a good look. He has also learned not to take romantic relationships lightly. He is more careful and slow about his love interests. This tactic has proven beneficial to his creative process, as well.

Inspiration for his paintings — a piece called “Derealism Portrait No. 1” sits nearby as Brinston talks. It abstractly depicts a man with a blue face and blonde hair gnashing a toothy grin that flies around his head. It comes from Brinston’s interactions with strangers. In fact, Brinston says, most of the conversations he has these days are with people he hardly knows. “Derealism” sprang from a discussion with a stranger about people’s detachment from reality.

But, for as many new people as he’s coming into contact with, Brinston doesn’t really have the same sort of missionary purpose one might expect from a born-again Christian that’s recently had a near-death experience. Rather, he tries to stick to the bare principles of Christianity like love and unconditional understanding. Passing judgment on others is not his style.

Instead, Brinston just sticks to painting, preferring to encourage others through his story. He will paint on anything. He has a series of motorcycle helmets coming out that serve as a reminder to those too prideful to wear one. Now that he’s died, gone to heaven and returned, he burns with an inextinguishable fiery passion for art. 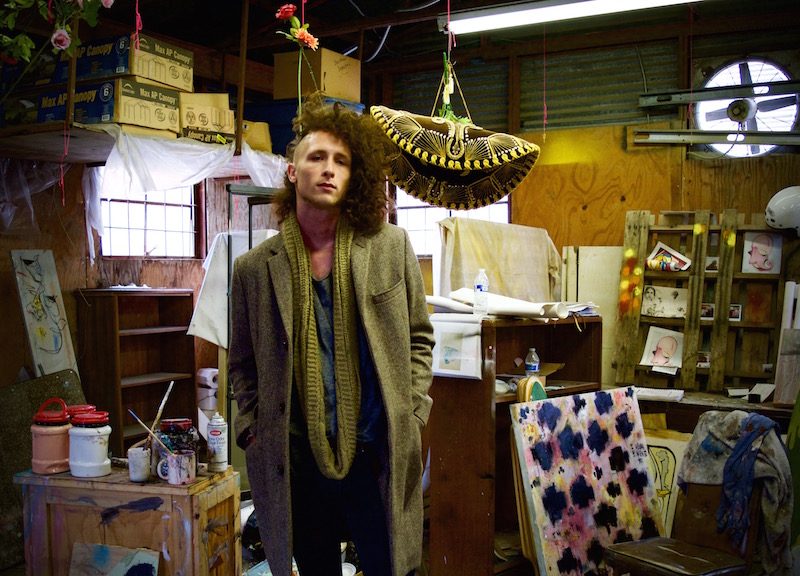 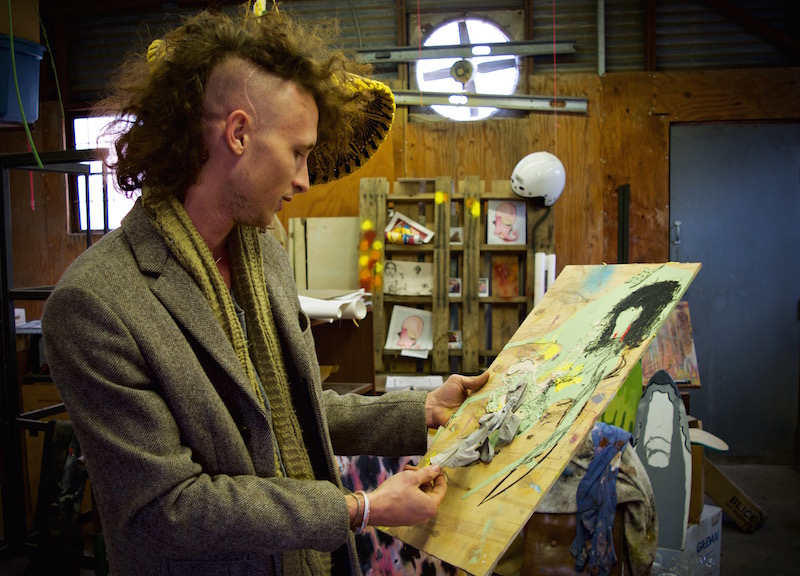 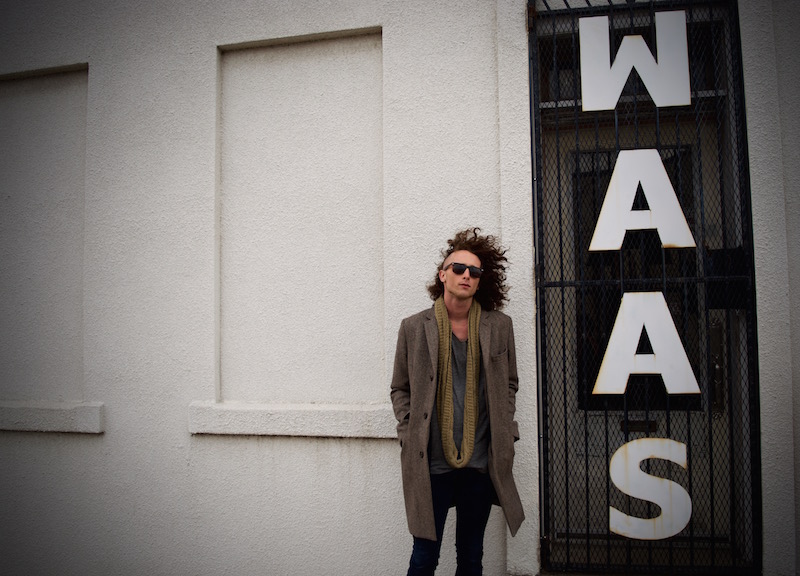