White Noise: KNON-FM Is Picking Up The Pieces After Tornado Damage. 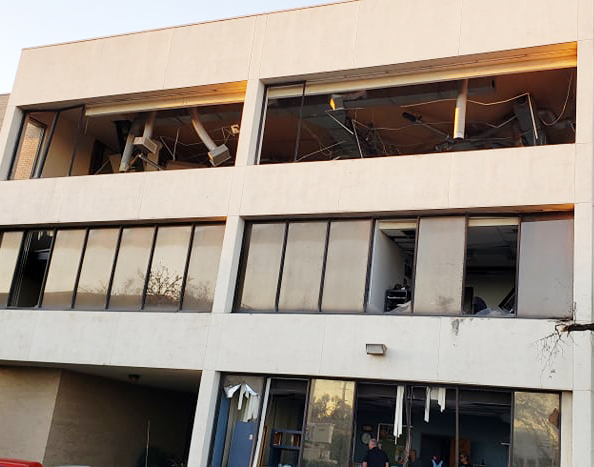 89.33 KNON-FM’s Building Was Destroyed by the Tornado Sunday Night, And Kacey Musgraves Is The Center Of Cultural AppropriationAccusations. Plus More!

You know how in movies, they show tornadoes as funnels of wind hitting the ground and maneuvering haphazardly, destroying homes and crumbling infrastructure in its wake? That actually happened in our neck of the woods Sunday night, and it left behind plenty of destruction. KNON-FM, Dallas’ largest independent radio station, was among its damage.

Thankfully, nobody was hurt, and DJs were able to evacuate the premises safely, but because of the building’s torn condition and loss of power, the radio station that broadcasts on 89.3 FM is without a home right now. KNON manager Dave Chaos told the Dallas Morning News that they are currently working on moving every salvageable possession out of the building safely, but that making the subsequent move to a new location is estimated to cost about $60,000.

To help the station with its rebuilding efforts, you can pledge to KNON here.

In the spirit of bouncing back, another musical institution may possibly spring back to life. Death Row Records, the long-defunct hip-hop label founded by Dallas rapper The D.O.C. and his former associates Dr. Dre and Suge Knight, is in talks of being revived, TMZ reports.

This is, of course, is a long shot. As the article points out, resurrecting the label will require more investors to pool together capital, but it’s a nice thought. Realistically, there’s more likely going to be a documentary on the revered hip-hop label behind legendary albums such as Dre’s The Chronic and 2Pac’s All Eyez On Me, which is also mentioned in TMZ’s report.

While Knight is serving a 28-year prison sentence for a deadly 2015 hit-and-run, the former record executive and producer has signed his life rights to his close friend, reality star and former rapper Ray-J. The D.O.C. left Death Row in 1995, but during his tenure with the label, he presided over some of its flagship releases (particularly many of Snoop Dogg’s early albums).

Let’s hope Ray-J gives the Oak Cliff-raised N.W.A. collaborator a seat at the table before inking some deals on the label’s behalf.

Speaking of seats, it appears Texas native Kacey Musgraves is being asked to have one, as she has drawn ire from Vietnamese-Americans for wearing an áo dài without pants during her two-night stand at Toyota Music Factory. Vietnamese-American writer Dan Q. Dao summarized it best in this Paper Mag think-piece: “If your costume is offending someone, there might be a deeper reason why. Have the patience to listen and the range to understand.”

It’s easy to unknowingly do hurtful and offensive things, but some people do it so consciously that it evades any doubt of bad intention. Case in point, Janis Joplin biographer Holly George-Warren revealed in her new book Janis: Her Life and Music that former Dallas Cowboys coach and current Fox Sports pundit Jimmy Johnson bullied the legendary singer-songwriter.

And when we say Johnson was a bully, we mean he was on a spectrum between Ben Affleck’s character on Dazed and Confused and Harvey Weinstein. Yeah. Apparently, Johnson mocked Joplin for her pubic hair, nicknaming her “Beats Weeds.” There are also disturbing allegations of groping, which seem to be even more suspect when considering a 1992 Sports Illustrated piece in which Johnson says Joplin, “never wore any panties…from what I understand.”

The news pertaining to the act of disrespecting women doesn’t end there. Oh, no.

On Friday night, Detroit rapper Danny Brown accosted a male audience member at Canton Hall for heckling opener Ashnikko. This unidentified harasser voiced his displeasure at her music and told her to eat his ass, after which she said, “Shut the fuck up while I’m on stage.” The public shaming went on all night, but a short video of the incident went viral on Twitter:

@xdannyxbrownx is a real one for calling out a fan who was disrespecting @ashnikko during her performance last night in Dallas. Watch the embarrassment at the end pic.twitter.com/ZnXnmC6jKm

On a far lighter note, it’s been a good week for local releases.

Dallas rapper Jayson Lyric, whose track “Special Occasion” was named Song of the Day, has a new video out for his single “No Edits.” Ironically, the video is pretty edited:

An EP in a similar vein dropped from Dallas-based Uptown Goths’ new EP Foods You Might Find in Space:

Concluding what has apparently been the unofficial hip-hop music video week is Trapboy Freddy, whose latest is for the cut “Guardian Angel”: