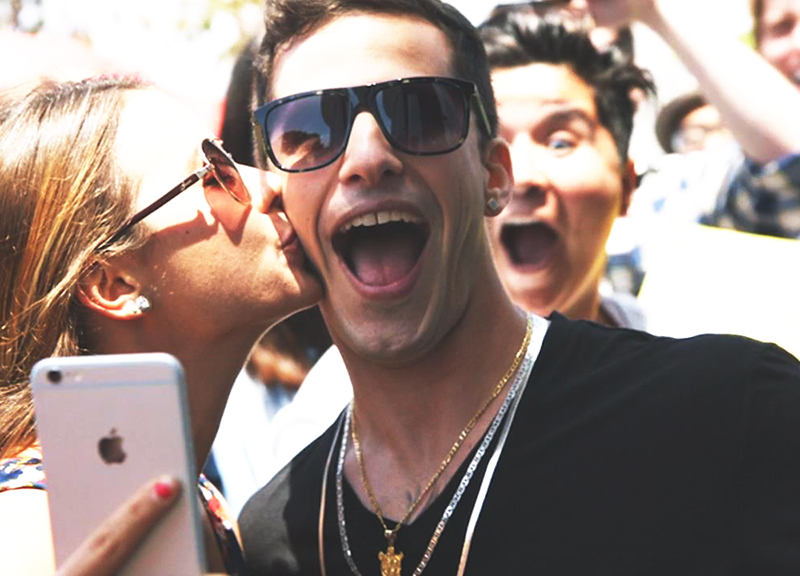 The Lonely Island’s Popstar Has The Sickest Features.

American existence in 2016, whether we like it, means suffering through a daily bombardment of news about pop stars living their pop star lives.

Wherever we turn, some new entertainment blog or magazine or reality show or Facebook article awaits, ready to tell us all what Kanye ate today or who Justin Beiber insulted last night or why Jimmy Fallon threw water in Zac Efron’s face on TV. It’s enough to make your head spin — which is doubly bad considering all the eye-rolls that come along for the ride, too.

Using this disdain that a lot of people have about the ridiculousness of pop stars to their advantage, the Lonely Island crew — in all their genius — present Popstar: Never Stop Never Stopping, a mock doc that follows the life of Conner4Real (Andy Samberg), whose narrative is like a marriage of Justin Timberlake’s breakout success, Justin Beiber’s antics and Lindsey Lohan’s mom.

After performing in the boy band Style Boyz with his best friends Lawrence (Akia Schaffer) and Owen (Jorma Taccone), Conner explodes into a solo star and embarks on a career that brings Owen along for the ride as his deadmau5-like DJ and leaves a rightfully bitter Lawrence in the dust.

There’s certainly some inspired star power in Popstar. The film features tons of fake interviews with real celebrities, who are all too willing here to roast themselves by attesting to the awesomeness of Conner. Oh man, are they great. Some are predictable, sure. But many will surprise you. Mostly, these occur under the idea that these icons are Conner’s peers who want to help him promote the release of his second album — until, very predictably, it tanks and the logistics of his over-the-top world tour go awry.

Ultimately, Popstar is about Conner losing his identity, alienating his true friends and surrounding himself with a bunch of “yes” men and women. He’s on a downward spiral, about to crash. And he’s not taking it well.

Popstar may sound like an overlong Saturday Night Live skit, and during some parts, it very much is. It doesn’t quite have the panache of Christopher Guest’s films, which are a clear inspiration here. But it’s better than a number of other movies that have spawned from SNL vets.

Conner’s music itself goes a long way toward that, with the Lonely Island having penned about a half-dozen new songs for this film, most of which are fantastic. More than just funny lyricists, the Lonely Island is a trio at the top of its pop songwriting game heading into this film. Of course, they’re great comedy writers too, and the big bits in the film hit on all the right notes.

It’s just that the connecting pieces don’t always fit together. Would these jokes land better as a series of skits over a few months, rather than a as part of a 90-minute film? It’s possible, which is not to say people won’t enjoy this film as a whole — parts will be quoted by Lonely Island fans for years — but that this satirical look at the music industry doesn’t quite stick its landing. That’s in part because it’s not quite a music documentary Popstar starts off as a commentary on the antics and ridiculousness of pop stars lifestyles, then switches gears into a buddy film about finding yourself and the returning to the friendships that shaped you. In the end, it’s uneven — too bad because the celebrity riffs are when Popstar is at its subversive best.

Still, like the radio hits that spurred it, Popstar‘s fun enough and easily digested. It has its place.