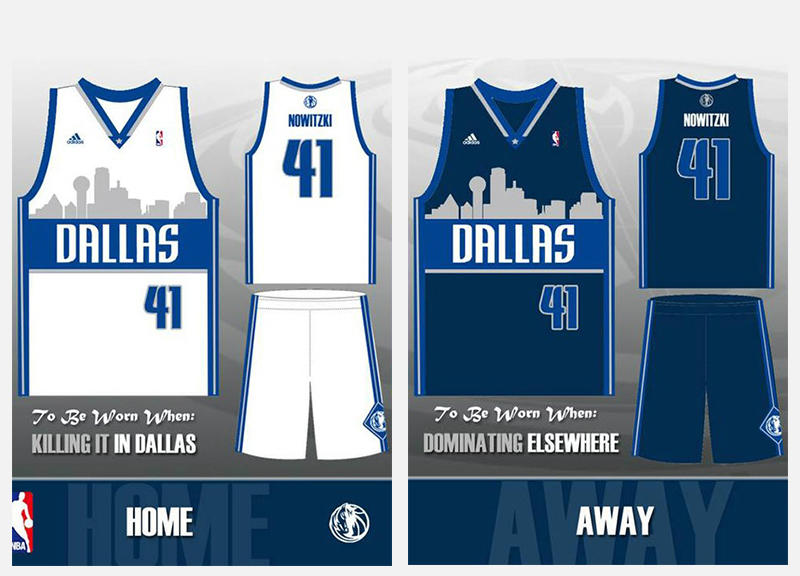 We Caught Up With The Guy Who Designed The Mavericks’ New Skyline Jerseys.

During yesterday’s let’s-get-ready-for-the-2014-2015-NBA-season press conference hosted by the Dallas Mavericks, team owner Mark Cuban, in addition to introducing the team’s newest roster additions, unveiled something else coming soon to the franchise’s on-court action.

After a year-long, crowd-sourced effort in which the Mavericks asked fans to help the team design a new alternate uniform to be worn by players beginning with next year’s 2015-2016 season, Cuban finally unveiled the winning entry into that contest. And though it may not be worn until next season, it is available for T-shirt form already at the Mavericks’ and Stars’ new Victory Park apparel shop, The Hangar.

Designed by Dallas-based graphic designer Geoff Case, the new uniforms are designed mostly around a skyline-centric concept. Fitting then, that a team at USA Today just named the Dallas skyline as the best gosh darn skyline in the whole dang world.

Snap reactions to the design have been a little mixed: D Magazine hates it, but other star area athletes, including Rangers pitcher Derek Holland, are all about it.

As for us? Well, we’re definitely into anything that finds the team staking even more ownership on the city it calls home, which this design certainly does. Interestingly, Case tells us that this very idea was the crux of his inspiration.

How do we know? Well, after yesterday’s announcement, we caught up with the man himself to talk more about the design, what drew him to the design contest in the first place, and what exactly he’s getting out of this whole deal.

First of all, how’d you find out that your design had been selected? What was your immediate reaction upon finding out?
When I got the call that my design won, I was pumping gas and did like a half-Michael Jackson type air kick, which made it kind of awkward at the Shell station. But I didn’t care. Even if you think you have a good shot at something, there is nothing that can prepare you to hear that your favorite team is going to add something you created to their legacy.

I’ll assume here that you’re a MFFL. What’s your earliest memory of the Mavericks? What’s your favorite memory?
Earliest memory? Reunion Arena against the Orlando Magic with Shaquille O’Neal. Favorite Memories? The 2011 title and Dirk dropping 53 on Houston while I was in the nosebleeds with my college roommates from Baylor. It was a long trip back to Waco for them since they were Rockets fans.

Speaking of long trips: This has been a long process! It started in 2013, you waited a year to find out you won, and now you”ve got to wait until the 2015-2016 season to see them on in-action players! Has this been an excruciating wait?
It’s been really tough — but, honestly, it’s better to have won and waited than lost, right?

For sure. But you also run your own design company, 1 Man Agency. How similar is this project to the kind of work you normally do?
Very similar in a lot of respects. 1 Man Agency covers many techniques and services from logo design, corporate identity and style guides to full-scale branding and brand development. I think we showed that we can compete with some of the big boys in that regard, and the positive reactions I’ve seen from the fans has been overwhelming. An NBA jersey is one of the ultimate branding projects you could ever work on and 1 Man came out on top out of thousands, including other agencies.

What made you want to enter a design in the first place?
I saw the early submissions and didn’t see one that I was blown away by. I had drawn some early version Mavs skyline jerseys in high school that looked interesting — around 1998 or something. I didn’t see any skylines posted [in the contest] at the time, and this disappointed me. I decided that I couldn’t leave my Mavs hanging without a proper version of the concept. Since I knew what direction to take, I spent the next three days working on how to bring the skyline to life. I watched YouTube videos of some of my favorite Mavericks games for inspiration and listened to Kanye West’s 808s & Heartbreak on repeat during the entire creative process. “Street Lights” in particular was a big influence.

Graphic design is something that tends to get a little marginalized in the public eye as is. There are all sorts of companies out there that ask for free design work — and yet the Mavericks are a business that can certainly afford to pay for a design. Are you getting compensated at all for your efforts here? Are you getting any royalty on jersey sales? Do the Mavericks outright own the design now? What does this win mean for your career? Is the reward purely a resume boost? How do you feel about crowd-sourced design projects like this on the whole?
The only compensation I’m receiving from the design is $1,000 from the wonderful folks at CrowdSPRING and season tickets from Mark [Cuban] and the Mavs. I’m not sure about the legal aspect of the Mavericks owning my design, but I read what Mark posted about the rules of the contest — the compensation and what to expect. I am kind of old-fashioned when it comes to doing business with respect and integrity; making things difficult for my clients is something I always try to avoid. I agreed to the conditions when I posted [my submission] and didn’t expect anything outside what was promised in the post. It’s a done deal, and I couldn’t be happier. As far as my career, I think having a project like this certainly can’t hurt. I really believe it’s going to be one of the more iconic jersey designs in NBA history and will only get better with time, so I’m really excited about that. I think the biggest thing to take away from this is that anything is possible and to always stay hungry. You are only as good as your last job. As far as crowd-sourcing? I think that is where we are headed. Whether or not you agree with it is up to you. There will always be a need for agencies, but it just means we’ve got a little more competition. I really think it benefits the small- to medium-sized businesses the most, which I believe is a great thing for America. There is no reason the local doughnut shop down the street shouldn’t be able to compete with Dunkin’ Donuts on their home turf. 1 Man Agency’s pricing is actually scaled to handle smaller budgets for the local businesses, so we have the ability to consider smaller clients that inspire us.

What screamed to you about your idea that it was the design for the Mavericks’ jersey?
I think the Mavs and the American Airlines Center are the main reason that the Downtown and Uptown areas have been revitalized in the last decade. The Dirty/Filthy/Nashty/Cuban Era got people excited about going to Downtown again. Suddenly, it was cool to catch a Mavs game and hit the bars afterward. Heck, you might have even seen Dirk and Nash playing pool. What better way to honor the turnaround of the Mavericks and the Downtown area by cementing that legacy and story in the design?

The Dallas was actually just voted by a team at USA TODAY as being the best skyline in the whole world. What do you love about the skyline? What makes it so unique in your eyes?
The skyline provides emotional and visual context to the experience of going to a Mavs game — with one of the city’s most recognizable features. Ironically, the most critical component of the skyline design is Reunion Tower. I know the mock-up was missing the ball but that was a rushed version built for the press conference. They have told me the T-shirts they are now selling are the version you should look at, which is correct and true to the skyline and my design.

This isn’t the first skyline-themed jersey in the NBA. Certainly, you’ve seen the classic Denver Nuggets one. Was that an influence at all upon your design at all?
When I decided on the skyline as the route, I researched all jerseys with skylines on them. Denver was actually my least favorite even though that jersey is one that is similar to [my] skyline at first glance. I’ve always thought that particular design is too busy with the rainbow colors and horizontal line cuts on the shorts. The stark background of the Dallas skyline on jersey is much more powerful, in my humble opinion. My favorite of the cityscape designs was Golden State’s “The City” jersey. Putting the number inside of a street car trolley takes that design to another level.

What do you think makes a great sport jersey? Do you have a personal favorite from another NBA team? Which local franchise jersey design besides the Mavericks do you most enjoy? Why?
I really think you should have clean lines and, with the addition of HD television, the textures of the fabrics should be interesting and semi-complex, but only if they add to the design objective. The most important thing is that is must create an emotional bond with the fanbase of the city it represents. Art is subjective, so you can’t please everyone. But classic designs get better with age. The reaction to my new Mavs jersey is very positive. I even got Texas Ranger Derek Holland’s seal of approval! So I’m feeling really good about the design getting embraced by our fan base. Here is a truncated version of my epic jersey list: The Baylor Bears’ alternate black uniforms with golden chrome helmets; the classic Boston Celtics jerseys; the Brooklyn Nets’ jerseys, although I’m not crazy about the logo; the current Seattle Seahawks uniform; the Golden State Warriors’ “The City” jersey; the Chicago Bulls’ jerseys; and the Mavericks’ home whites.

What’s next for you and your company?
Our bread and butter has been responsive web design, which gets our foot in the door. Then we overwhelm the client with over-the-top customer service. After that, we move into branding, campaigns and whatever else the client may need. Our business model has been growth-by-strategic-client-acquisition and word-of-mouth and referrals, which has been amazingly effective. As far as projects go, we have just completed a logo for a major sports supplement ingredient that will likely replace caffeine someday in energy drinks. Also, we just completed an amazing e-commerce site for a California-based sports supplement company called Inspired Nutraceuticals, which we are very proud of. Next, we just finished the web design and development for jennareneefit.com. Jenna Renne is one of the top fitness and fashion models in the world, and she happens to be the girlfriend of my favorite UFC fighter Travis Browne. That will be launching this week and fans can see her new responsive site very soon. We are looking to fill one or two more spots on our client roster over the next few weeks, so if any of your readers would like to reach out to us they can reach me via email.