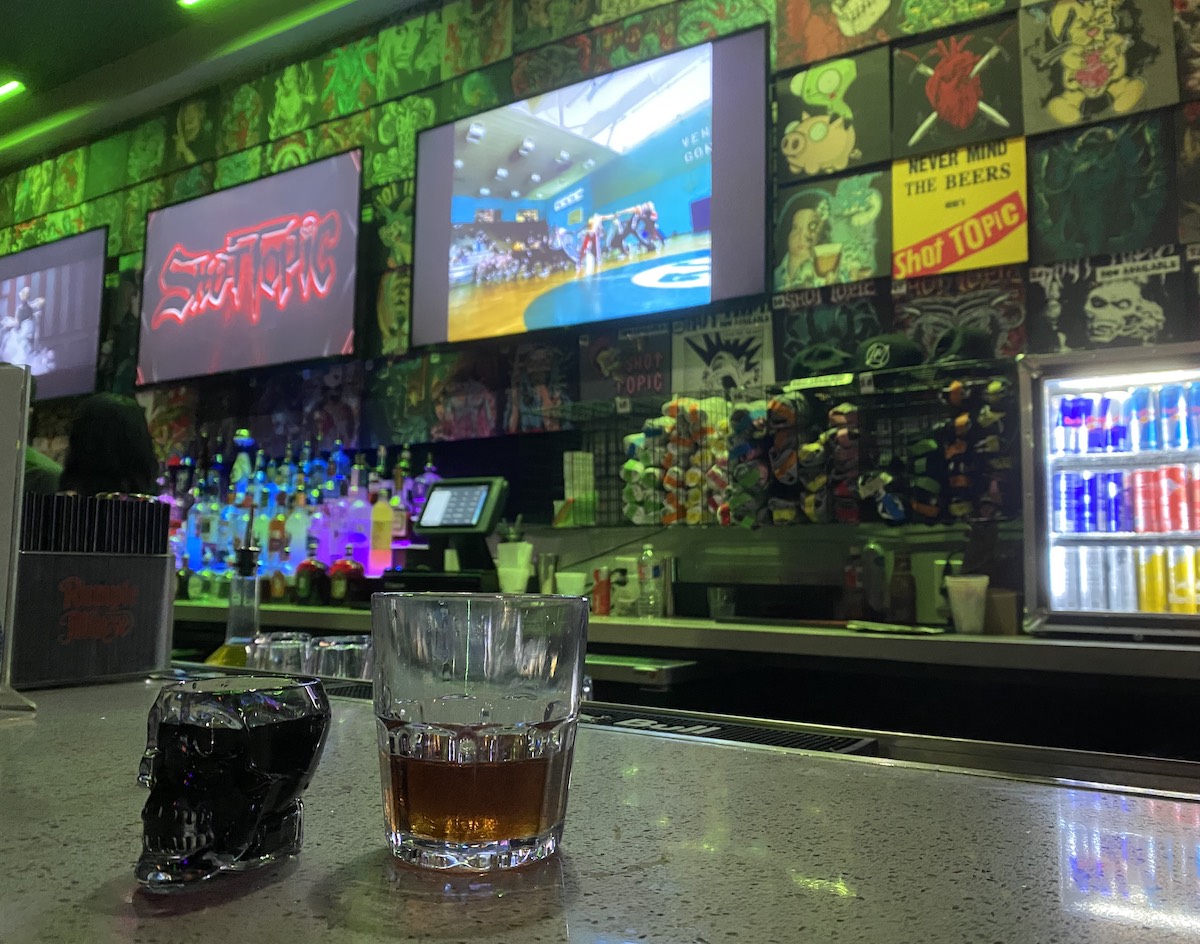 Thank You For The Venom — We Checked Out The New Hot Topic-Inspired Bar In Deep Ellum And Tried Some Of It’s Themed Drinks.

With Emo Nite having just celebrated its fifth year, the When We Were Young music festival, My Chemical Romance’s reunion and the explosion of Y2k culture and emo rap, emo has been proven it was really never a phase after all.

Among this emo renaissance is Shot Topic, the new bar on Crowdus Street in Deep Ellum that’s serving up shots, pop punk anthems and all the angsty vibes that come with hating your small town and parents. Paying homage to Hot Topic, the inspiration doesn’t stop at the punny name — inside you’ll find an amp wall, instrument decor, TV’s playing the finest emo music videos and a wall of t-shirts, some of which are the bar’s own merch made to look like pop punk album covers. And of course there’s the drink menu, which is full of specially-curated shots that are inspired by all our favorite songs of the emo heyday.

Your favorite Central Track editors Frances Tingle and Stephanie Salas-Vega headed over to Shot Topic to soak in the vibes, try out some shots and Google all the emo music videos they played just to reminisce.

Here’s our 2 cents on the five of nine speciality drinks we tried (and could handle).

The Taste Of Ink

Named after The Used’s biggest hit, this black drink has garnered the most attention online. It’s made with limoncello, triple sec, lemon infused simple syrup and edible glitter and served in a skull-shaped shot glass.

Definitely lemon-y (a real alcohol connoisseur over here.) It kinda tasted like air freshener, but, like, in a good way and it was easy to drink. Stephanie said that it tasted like the leftover milk from a bowl of Fruity Pebbles. Air freshener and leftover milk probably isn’t the best way to sell this drink, but trust us, we liked it. Be warned — this will stain your lips black a little bit if you sip on it. — Frances Tingle

Definitely don’t order a bunch of these if you’re on a date! But do try it at least once because it’s really tasty and Instagram-y. — Stephanie Salas-Vega

Inspired by Nirvana’s “Lithium” (or maybe Evanescence’s?) this one is made up of Deep Eddy Lime, melon and Sprite.

I must order Deep Eddy Lime with Sprite at every bar I go to, so I guess you can say it’s kind of “my drink.” When we say this one has a splash of melon, I was like ‘Hell yeah, gotta try this one for sure.’ The drink was a bright green color that looked almost like some kind of chemical. However, this was no toxic waste. In fact, it was probably our favorite drink of the night and I would have ordered five more if I could. — SSV

I second that! It was my favorite. It’s very sweet but in a pleasant way, not a sickly way. It tastes just like those little melon-flavored Japanese hard candies and I wouldn’t have clocked it as alcoholic. As someone who can’t drink anything strong-tasting without making a face, this is perfect. — FT

Fitting with the Blink-182 song’s theme of refusing to grow up, this drink has Skrewball Peanut Butter Whiskey and blueberry Red Bull, which results in a grown-up spin on PB&Js.

Another indication of how weak our palettes are, we were guessing coffee and chocolate after our first sip. But once we googled what a Skrewball was, the peanut butter flavor became undeniable. The blueberry Red Bull was a little lost for me — it was purely peanut butter city. Stephanie ordered this drink but wasn’t feeling it so I took it off her hands and while she wasn’t a fan, I was okay with it — especially since it’s a nice breakaway from the mostly-fruity menu. — FT

Keeping it simple, this shot has chilled Crown Apple and a splash of cranberry juice. It’s as All American (Rejects) as apple pie.

Except it was served kind of warm at that point. Just the scent reminded me of that Mexican apple soda Manzanita Sol, so, I have to say, I actually enjoyed this one. It’s not as refreshing as a Manzanita Sol, but it’s worth ordering at least once. Apparently, we may have had it more than once though … — SSV

Yeah! The first drink I ordered was The Spaceman, which has Western Son Blueberry, peach schnapps, sour, sprite and edible glitter, and I was extremely hyped for it. The bartender mistakingly switched it with another patrons Dirty Little Secret, so for a good five minutes we were scratching our heads as to why this blueberry-peach-lemon-lime concoction tasted so overwhelmingly of apple. — FT

Gather ’round Pierce The Veil fans, this drink is made of Jim Beam, peach schnapps and pineapple Hawaiian Punch — an unexpected fruity representation of the angsty namesake tune.

As a hoe for tropical-flavored cocktails, I was excited to try this one. It smelled amazing, like a Bath and Body Works, and the taste wasn’t too far from that either because, boy, it tastes way stronger than it smells. It is alcohol, so yeah, it’s gonna taste a little perfume-y. While it does kind of punch you in the chest, there’s also a ton of sweetness, maybe a little too much, so it felt a little unbalanced. If you like super sweet drinks (followed by bitterness), this might be for you.  — FT

Overall, we think it was a pretty neat spot with a clever concept. It had a full wall of emo nostalgia that had us talking about our emo phases (or lifestyles, actually), the blazing hot summers of Warped Tour and the best Panic! At The Disco album ever. That was quite fun! We agreed that it should go bigger with its decor to match the absolute chaos Hot Topic used to be in the early 2000s, but we acknowledge that this is still a new bar so we’ll give it some time.

Would we go back for those warm and questionable specialty drinks? Hmm, maybe not willingly — it reminded us of drinking our stashed away, unrefrigerated booze as teens, which is very on brand for the bar’s concept! But the music is great and the staff was very nice.

To quote one of our Central Track contributors Eduardo Martinez, who just so happened to be there too: “They done turned Emo Nite into a bar.”